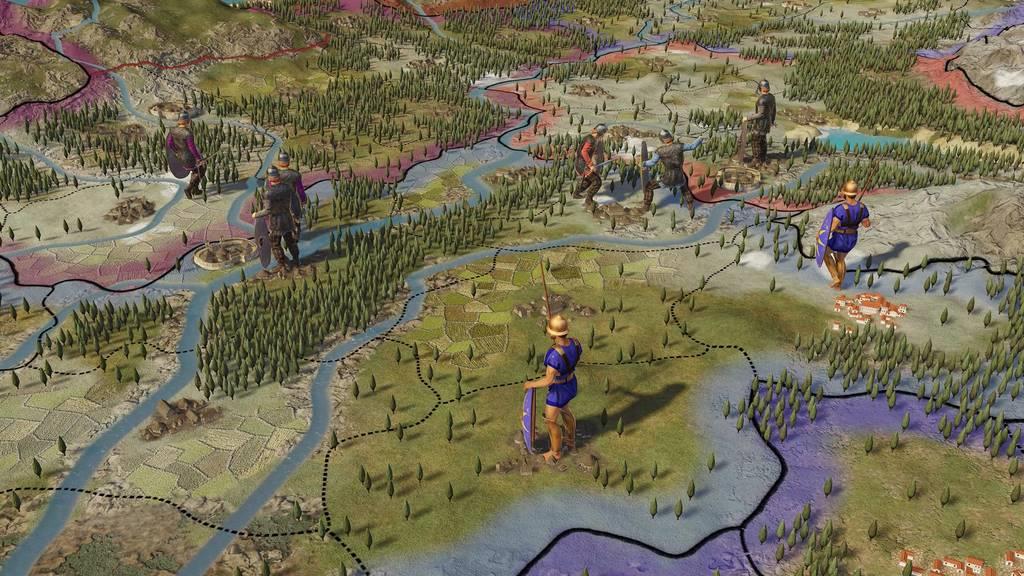 Let’s just get this out of the way up front: Imperator:Rome is a good game, and you should go out and buy it.  This will likely be the definitive game covering the era of the early Roman empire for some time to come.

That being said, what exactly is good about it?  To start off with, although there is a lot of information to keep track of, the interface makes it possible to do so.  There are 11 major areas that impact the running of your empire – an Overview, Government, Military, Technology, Religion, Economy, Diplomacy, Decisions, Trade, Characters, and Mercenaries – and each gets a small circular icon at the top of the screen.  Clicking on any of the icons brings up a window with information and controls relating to that area.  For example, clicking on the Technology icon brings up a window that shows your progress in discovering a new technology, and allows you to pick one when the prerequisites have been met.

Next to the circular icons are a (possibly empty) list of banner-shaped icons that notify you of events or conditions that require attention.  For example, if you go to war with an underfunded army, a banner will appear that lets you know this.

Above the circles and banners is a ribbon of important numbers: Treasury, Manpower, Military Power, Civic Power, Oratory Power, Religious Power, Stability, Aggressive Expansion, and Tyranny.  Hovering over each number s show whether the number is going up or down (Treasury up good, Aggressive Expansion up bad) and what factors are making it so.

If it sounds like this review is spending a lot of time on the interface, that is because Imperator: Rome is a huge game, and such a game lives or dies on its interface.  Paradox is known for grand strategy games with lots of moving parts and this is no exception.  To some extent Imperator is a combination of two of Paradox’s other titles: Europa Universalis IV and Crusader Kings II.  From EUIV comes a focus on expansion, CKII lends its loads of characters to keep happy. 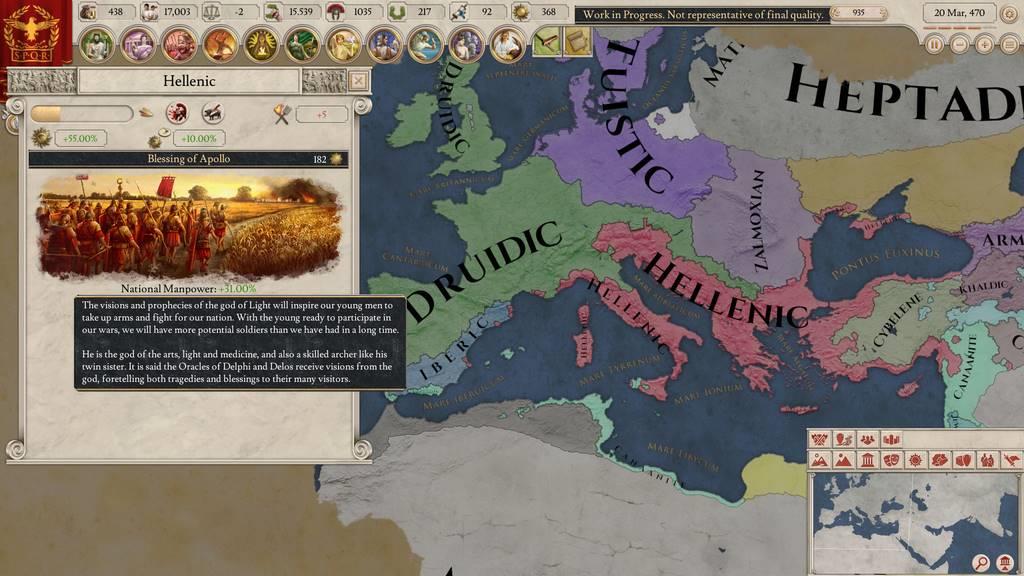 People have a tendency to be living in those parts of the world where you would like to expand, so warfare, rather than colonization, is the order of the day.  Combat follows the usual Paradox format of creating a big stack and stomping your opponent province-by-province, stopping for a siege from time to time.  It is best to have a casus belli before starting a war, and too many annexations too quickly leads to problems, but in general the military is a straightforward extension of your nation’s economy.  The better your economy, the larger the armies you can afford, the easier war will be.  Just like for real-life Rome it can become a virtuous circle of war-plunder-grow-war.

Trade is another route to riches, but is currently pretty simple.  Your capital city and each province have resources.  Each resource provides a benefit (population growth, happiness, and so on).  Sometimes they will have a resource surplus, in which case they have a choice: keep the surplus and gain a benefit based on the type of resource, or trade away the resource for a monthly payment and possible bonus (for example, exporting marble reduces Tyranny for some reason).  The capital and provinces can also import resources in order to gain benefits.  Oddly enough, importing resources also earns the nation money.  In general, trade helps everyone involved and should only be avoided for strategic reasons.  For example, allowing an enemy to import Iron would enable them to create to heavy infantry units, which you would then face in your next war.  The only real problem with trade is that there does not appear to be any way to initiate inter-country exports.  One can ask to import things but have to wait for an offer if one wants to export. 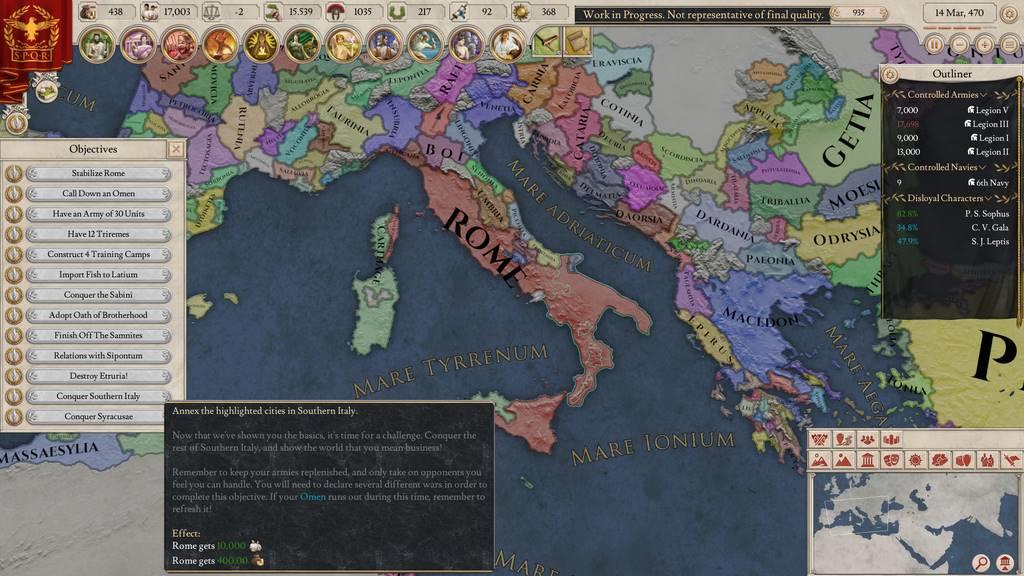 Handling people is (thankfully for this reviewer) toned down from CK2.  You are the “guiding spirit” of the country and do not have to worry that your cousin will inherit the throne, which is nice.  But there are still a lot of people to keep happy.  At present the reviewer has three families that are unhappy because they do not feel that they have important enough jobs in the government.  The longer troops stay around the more likely they are to become loyal to their general.  At that point they cannot be disbanded, although they must still be paid.  If a general gets too popular and too unhappy they start thinking about starting a civil war.  When this happens, their loyal troops follow and things go badly for your country.

The army is not the only source of trouble.  In Rome, there is a Senate.  It can disapprove of your actions (for example, starting a war), making you increase the tyranny level to push them through.  The Senators themselves belong to factions, and one must balance the factions’ power to keep them all happy.  This can be accomplished through strategic appointments to high offices (Censor, Augur, etc.).  Unfortunately, this can mean appointing sub-optimal candidates just because they belong to the right political party. 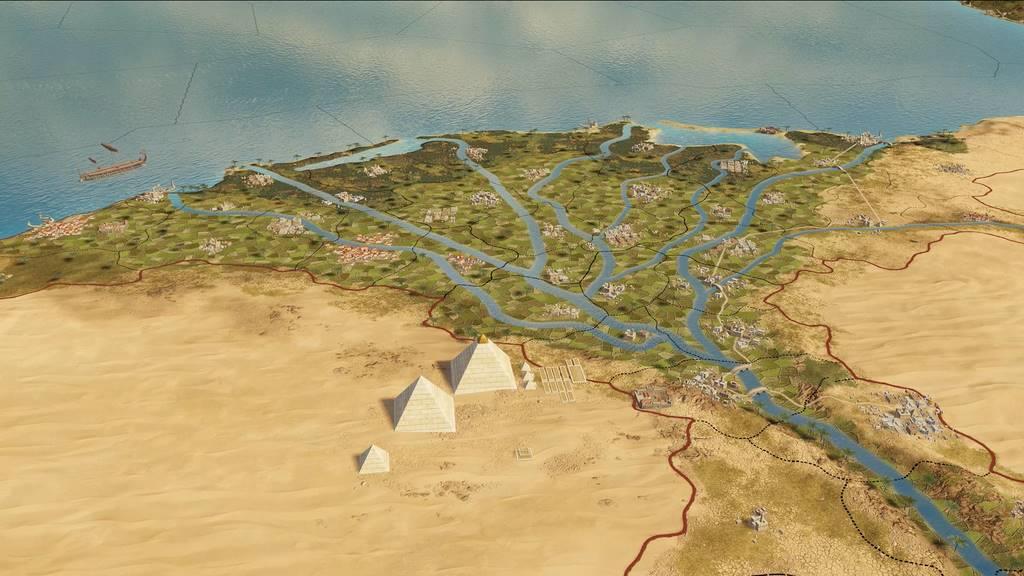 The problems with the game are the same problems that every grand strategy Paradox title has.  It is so huge that, short of crashing, it is hard to tell if it is buggy.  So many improvements are tiny (5% better discipline – how would I know?).  Despite generally good information access, more could be done (I assume conquered populations are being integrated, but have no idea how fast, or how many are left).  Things just happen sometimes (I have captured lots of enemy generals but am not sure where they went).  It is not clear how to do things that seem urgent (There are starving people in Forum Novum, but no obvious way to feed them.  I tried importing fish, but nothing happened).  I need a bigger screen – the map is too often obscured by information windows, especially when one is searching for what nations you are at war with.

In summary, “Imperator: Rome” is a well-done, huge game in the grand strategy tradition.  Given that genre, it is easy and fun to play, with an informative, aesthetically pleasant interface that is just a touch too busy in some places.  There is a lot of depth buried in its various systems, and serious min-maxers will definitely be wading through ponderous tomes of rules.  The game itself, however, is accessible without complete knowledge of everything that is going on underneath the covers.

A good game with a lot of depth – just what one would expect from Paradox.  Play it through once or twice just for fun, then grab one of the strategy guides that will be popping up to more fully appreciate the mechanics.