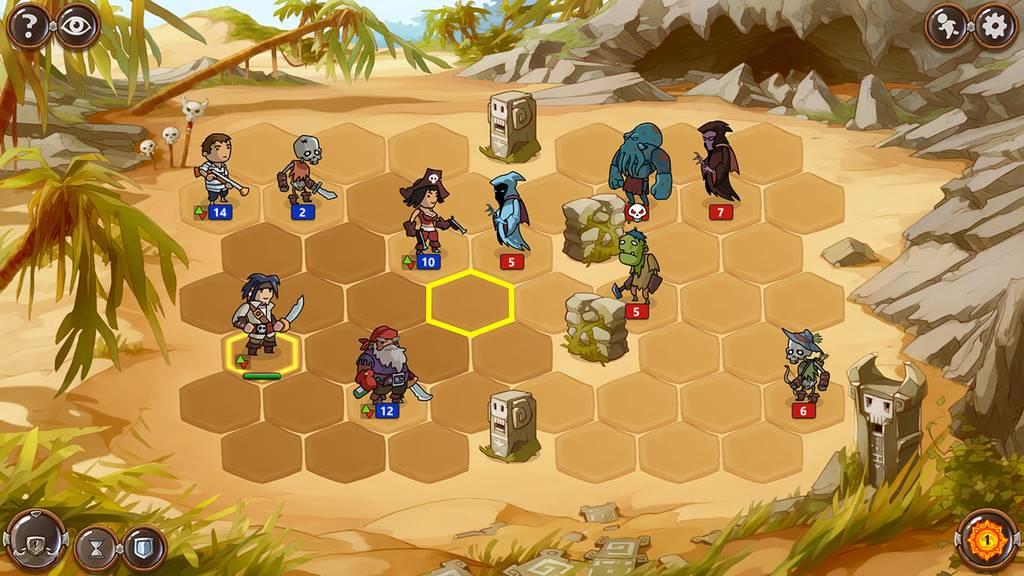 Written by Russell Archey on 3/11/2019 for SWI
More On: Braveland Trilogy

Strategy games are a core genre of the gaming industry.  They can be as complex as Real Time Strategy (RTS) games such as Starcraft and Command & Conquer, or they can be as simple as Plants vs. Zombies.  While the more simple strategy games tend to be easier since you have time to plan your moves as opposed to RTSs games where you’re opponent is preparing to attack you at the same time you’re planning your strategy, turn-based strategy games can still have a bit of complexity to them, require quite a bit of strategy to successfully progress, and can be more difficult if that strategy falls through.  Then there’s the Braveland trilogy.

The Braveland Trilogy on the Nintendo Switch contains all three games in the…well, trilogy: Braveland, Braveland: Wizard, and Braveland: Pirate.  At first it looks like only Braveland is available with the other two having a lock icon below them.  However, you can play the other two at any time, but the game recommends you play the previous game(s) first and asks if you’re sure if you want to proceed.  If you’re like me and have never played the Braveland games before, you’re probably better off going through the original game first as the other games add more than the last.  However, the basics are the same among all three games.  You’ll move from place to place on the map with each spot either having a shop, allies to recruit, or enemies to battle.

In Braveland, you play as a warrior whose home was raided by bandits and thieves, though no one knows for sure why.  The warrior sets out to find out who was behind the raids and to put a stop to it.  In Braveland: Wizard, you play as a wizard named Diana…well, sort of.  On the last day of her magic studies she was given a wizard’s staff as per tradition, but has not yet earned the title of wizard.  To earn that she has to pass one final test.  Then in Braveland: Pirate, a traveler named Jim comes to a port city without a penny to his name.  He asks to join a crew of pirates who take him aboard, but the very first day of the voyage results in disaster when a group of ghosts attack their ship during a storm. 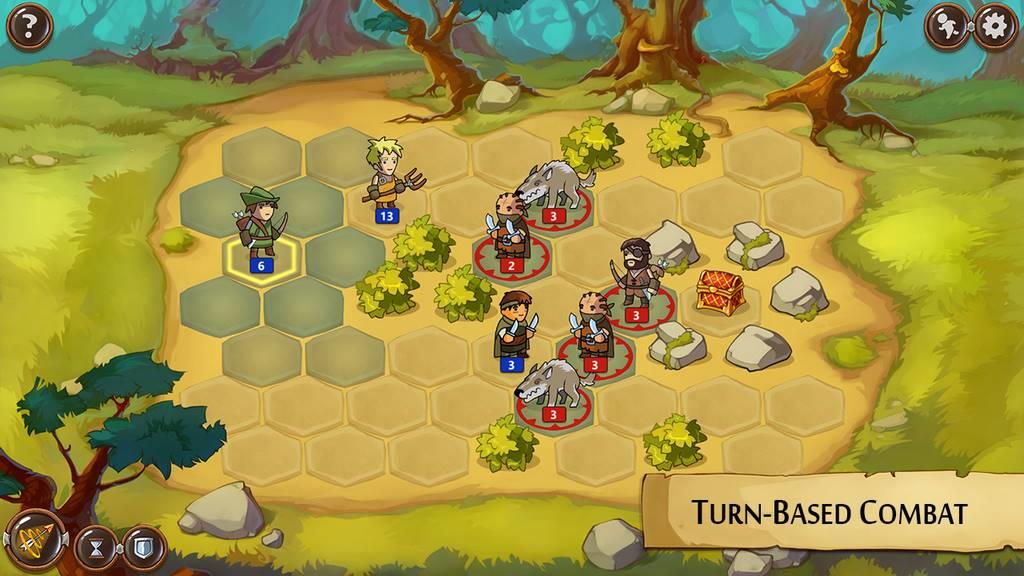 Battles take place on a hexagonal grid with your forces starting on one side and the opponent’s starting on the other.  Each type of unit (Peasant, Archer, etc.) is represented on the grid by a single figure with a number below it representing how many of that unit you have.  The more of a unit you have, the more powerful it is depending on its stats.  For instance, if a single Peasant has attack power of 3-6 and HP of 30, then a group of twenty Peasants, moving and attacking as one, will have an attack power range of 60-120 and a total HP of 600.  Granted that also means that as the total number of that unit goes down due to getting attacked, their attack power and defense will go down as well.  Once the total number of that unit reaches zero, that unit is no longer available for battle.

Thankfully death is not the end for a unit.  Once you manage to defeat all enemies you’ll earn some gold and any fallen allies can be brought back to life, but at a cost that’s taken out of the gold you’ve earned.  On Easy and even Normal difficulties this isn’t all that bad.  On hard however, it can get pretty costly.  The harder difficulties don’t adjust how much or how little gold is needed to bring fallen allies back, but it does change how difficult the battles themselves are, which makes sense.  Easy difficulty is a breeze and even on Normal I would basically fight each battle without too much strategy, normally taking a couple of units right into the opponent’s faces while the long-ranged units fight from a distance.  On Hard difficulty however, strategy is incredibly important.  You can’t just rush head-first into battle and expect to get out relatively unscathed.  I tried that…it didn’t end well. 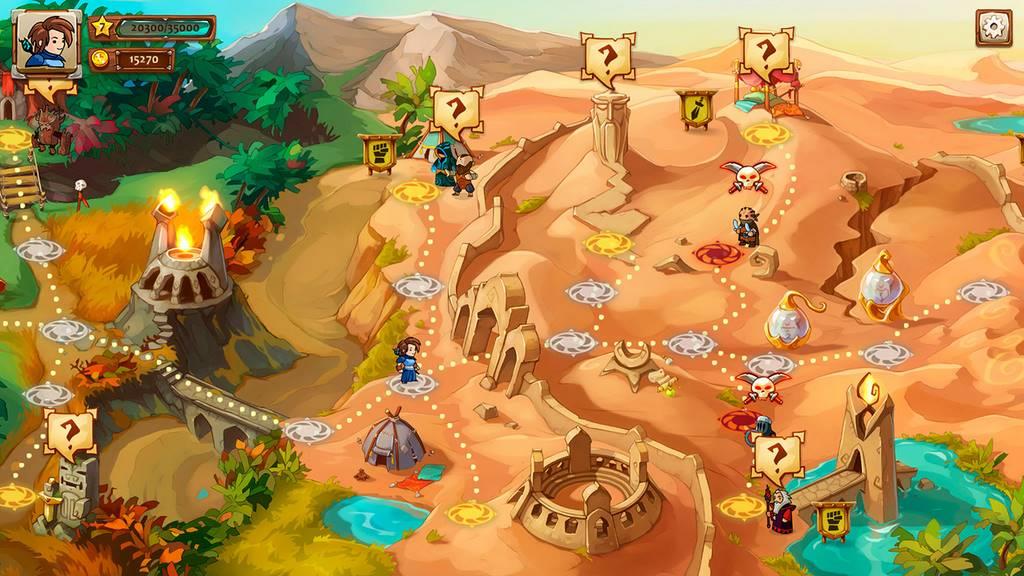 As stated there are more spots on the grid other than just battles.  A few times throughout the games you’ll come across spots where you will recruit a new type of ally, and then the next battle you fight will show you how to use that ally.  Other spaces will let you recruit more of the allies you already have, but there is a limit to how many of a certain ally you can have at any one time.  After each battle you’ll gain experience and when you level up, your leadership ability (among other things) will increase.  The higher your leadership, the more allies you can recruit, so while not every battle is required due to some split paths, it’s definitely recommended so you can level up, recruit more allies, and have a better chance at surviving until the end.  You’ll also come across spaces on the map where you can buy and sell equipment to increase your stats and possibly give a bonus to a particular ally type.  While you can have up to five unit types in battle, each one also has a star rating and you must keep the total star ratings of the unit types you wish to use at or under a certain amount, so strategy plays a big part in who you want to take into battle.  Do you go power heavy with only a couple types, or go with the numbers game and take in a few weaker types?

Each of the other two games brings something the previous game(s) didn’t.  Braveland: Wizard introduces talents, where at each level up you’ll gain a couple of points that you can put into various talents to give you various abilities or buffs to certain units.  Braveland: Wizard also uses offensive magic as opposed to the original game where, while one unit could fire magic at enemies, they were also used for healing as their offensive spell wasn’t all that powerful.  Braveland: Pirates expands the talent tree concept with more talents to choose from, but some being locked off depending on which talents you pick.  Also, unlike the first two games, the main protagonist Jim actually joins the fight himself as opposed to being the one who commands the units (think of it as you yourself are the Warrior or Diane in the first two games, but Jim himself actually fights in the third game).  Jim himself acts as a single unit with a decent amount of attack and defense, and thankfully the battle isn’t automatically lost if Jim falls and he can be revived using gold if you win the battle. 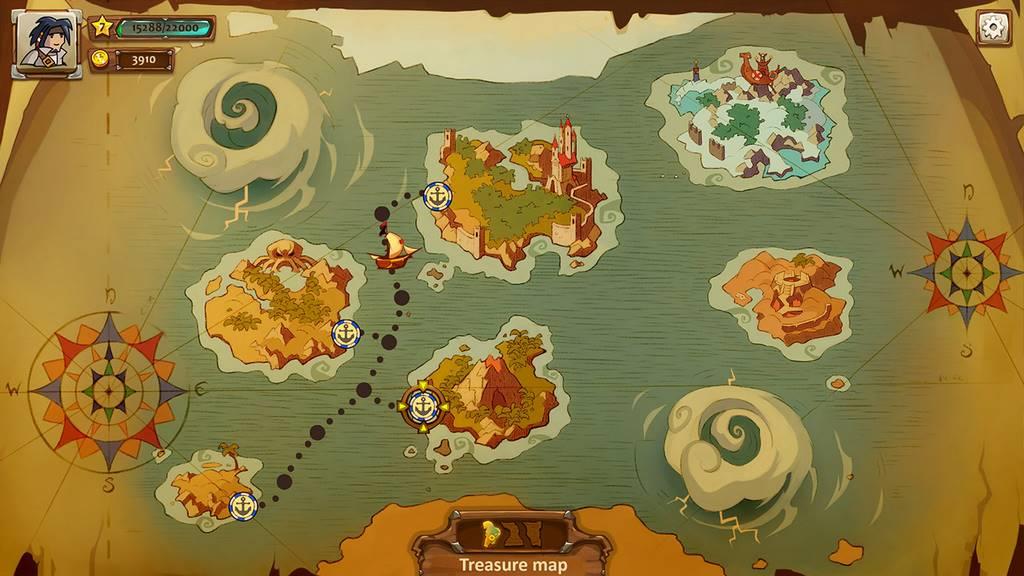 In terms of difficulty, it’s kind of interesting.  I tried playing on Normal for most of the battles, but for a bit in Braveland I set the game to Easy to see what differences there were and kind of left it there for several battles before switching back to Normal.  After that it was smooth sailing as my gold count was pretty high and I could just freely recruit units as long as I had room in my party to do so.  This was good because you can’t repeat battles and there’s no way to obtain gold other than winning a battle, or if you lose a battle you’ll get a small amount of gold depending on how much of a fight you put up (this is the same across all three games).  In Braveland: Wizard, I was good for several battles, but soon came to a roadblock where no matter which way I went I would get overpowered.  Thankfully there are dungeons where you can battle a few enemies, then come back later and fight more, so basically you can grind experience and gold if need be, though this could be tedious early on.  Braveland: Pirates was a lot like the original where I didn’t really have too many issues with it in terms of difficulty.

I was initially worried about Braveland Trilogy just being three mobile games ported to the Switch.  I mean it is, but for as much as I am not that good at strategy games, I enjoyed the three games in the trilogy…mostly.  Thankfully you can switch the difficulty at any time in all three games, plus you will come across other abilities you can use such the Amulet of Fury in Braveland and Tricks in Braveland: Pirate, both letting you accumulate Fury and Courage respectively to use special abilities that don’t use up a unit’s turn.  That said, the games can get a bit tough on Normal difficulty if you’re not careful, but there is some leeway with how loose you can be with your strategy.  Overall though, this is a fairly solid trilogy of games, simplistic as they are.  If you’re looking for something simple that you can pick up and play at any point and stop whenever you need to, Braveland Trilogy is worth checking out.

Braveland Trilogy is a fairly solid set of games, simplistic as they may be.  You can adjust the difficulty during the game so you can make it as easy or as difficult as you wish at any time.  While it would have been nice if the games were at least a bit more complex, keep in mind that these are ports of mobile games so the simplicity makes sense here.  Even still, if you want a complex strategy game, you might want to look elsewhere but if you’re okay with simple, Braveland Trilogy is worth checking out.