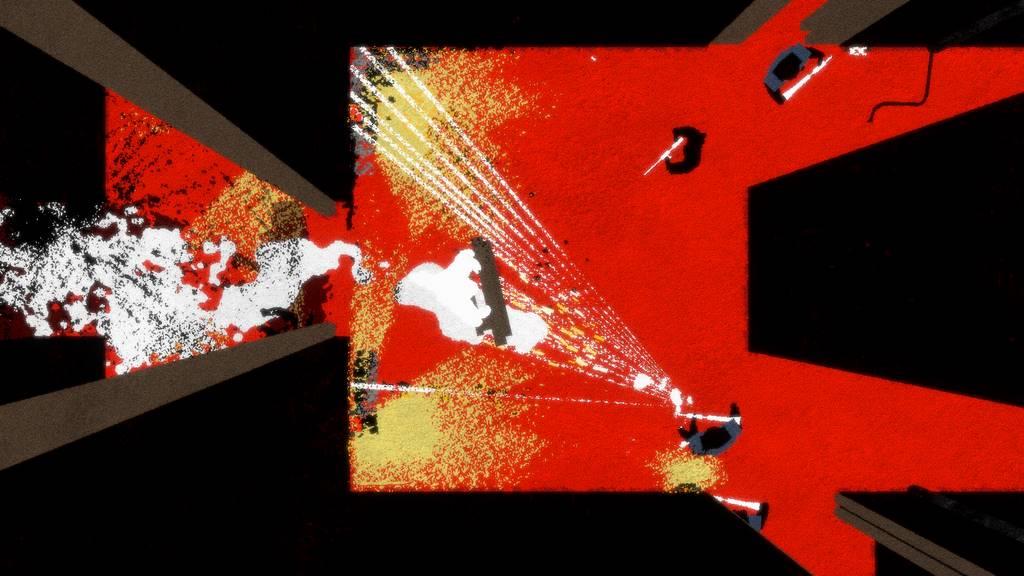 My favorite indie games are the kind that feel like an incredibly polished student project. The kind of game that takes a singular idea, builds on it in really smart ways, and then adapts that into an incredibly compelling gameplay loop that is subsequently polished like crazy. No plodding amateurish story, no condescending socio-political lectures, just pure game—that’s exactly the kind of indie game I like.

Gabe Cuzzillo’s Ape Out is exactly that kind of indie game, because it literally is an extremely well-made, highly polished student project. Cuzzillo developed Ape Out while studying game design at New York University. The game’s distinctive art style is provided by QWOP developer Bennett Fodd and the soundtrack was created by ex-Harmonix dev Matt Boch. Incidentally, Foddy and Boch are both associate professors for NYU’s game design program. The result of this collaboration is nothing short of spectacular; a gameplay system that grabs you and doesn’t let go in the best of arcade traditions, with an art and music style that are instantly arresting.

Ape Out’s premise is simple. You are a captured gorilla who escapes seconds after the game begins. As a now-escaped gorilla, you must make your way through multiple maze-like levels from an overhead perspective, until you reach freedom. Along the way many armed humans will try to put you in the ground, but having the strength of a gorilla, you can prevent this. By pressing the right trigger (or left mouse button) you will shove anything in front of you very hard in the opposite direction. If you shove a human and they come into contact with anything solid—a wall, a barrel, another human—they’ll burst like a blood-filled water balloon. It is difficult to describe how satisfying this is, and it never gets old. 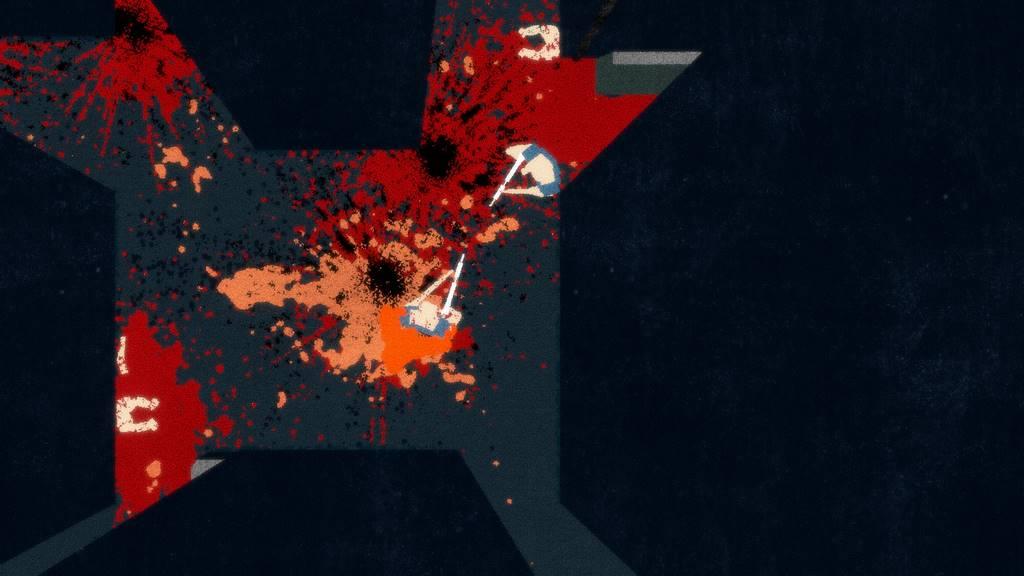 Pressing the left trigger (or right mouse button) will grab anything in front of you. This lets you interact with a few context-sensitive items, but more importantly lets you grab any enemy as a human shield. Your panicked hostage will always fire off a single shot with their weapon, which can mince any of their hapless fellows who happen to be in front of you. A human shield can also take a single hit from any weapon, which splatters them like the aforementioned water balloon.

You escaped ape is powerful but not indestructible; you can take three hits before dying. Your relative vulnerability, especially when swarmed by shotgun-toting heavies, makes Ape Out’s simple gameplay an intoxicating risk-reward loop. Plastering bad guys is exhilarating, but wading headfirst into a crowd is suicide and if you’re already injured (intuitively displayed by an ever-growing blood trail behind your simian), engaging even one or two enemies at once might not be worth it. You gain no “completion” reward for killing every enemy in the level—your only goal is to reach the end of the maze—so you can play as aggressively or as stealthily as you like. What’s more, the game will throw harder enemies with nastier weapons at you as you progress, and occasionally level hazards will show up too. 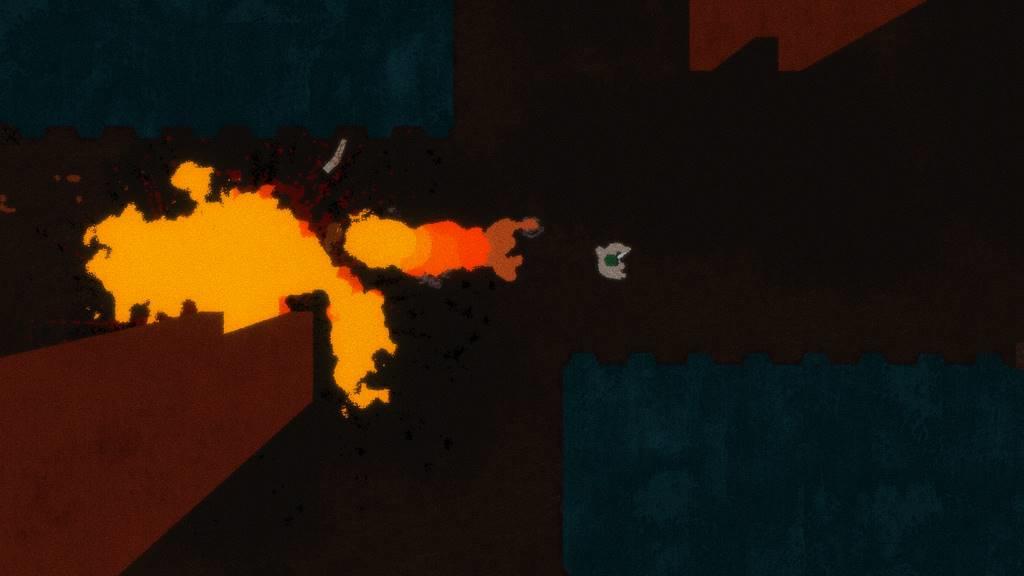 Make no mistake, Ape Out is a challenging game, but it always feels fair. Each level is only a few minutes long, so dying often (and you will), even inches from the exit, never feels particularly punitive. Ape Out walks that rare, fine difficulty line that so many indie games completely miss; it’s far more engaging than the no-fail-state tedium of a walking simulator, but it avoids the masochism of something like Super Meat Boy. Both of those kinds of games are fine in their own right, but I prefer something that will offer a satisfying challenge without ripping my head off from the word-go. Ape Out provides this beautifully.

The only game I can compare it to is the original Aliens vs. Predator from 1999, specifically the Alien campaign. As the Alien you were both supremely lethal and conspicuously fragile; you were surrounded by enemies with high-powered ranged weapons that could cut you to ribbons, but if you got within striking distance, any foe was quite literally your lunch. This power-vulnerability dynamic made me feel like a wild animal, and gameplay quickly melted into an almost instinctive, primal loop. Ape Escape imparts a similar, intoxicating cocktail of primitive impulses; I can be cowering behind a wall one moment, and the next, unleashing my righteous fury upon the pitiable dolt dumb enough to wound me.

As a result, Ape Out is addictive like the best arcade classics and the cleverest of indie games. I know it sounds trite, but it’s like Rampage and Hotline Miami had a baby. It’s that good. But I would be remiss if I didn’t credit the game’s masterful visual and sound design, which work like mad to sell the habit-forming gameplay. 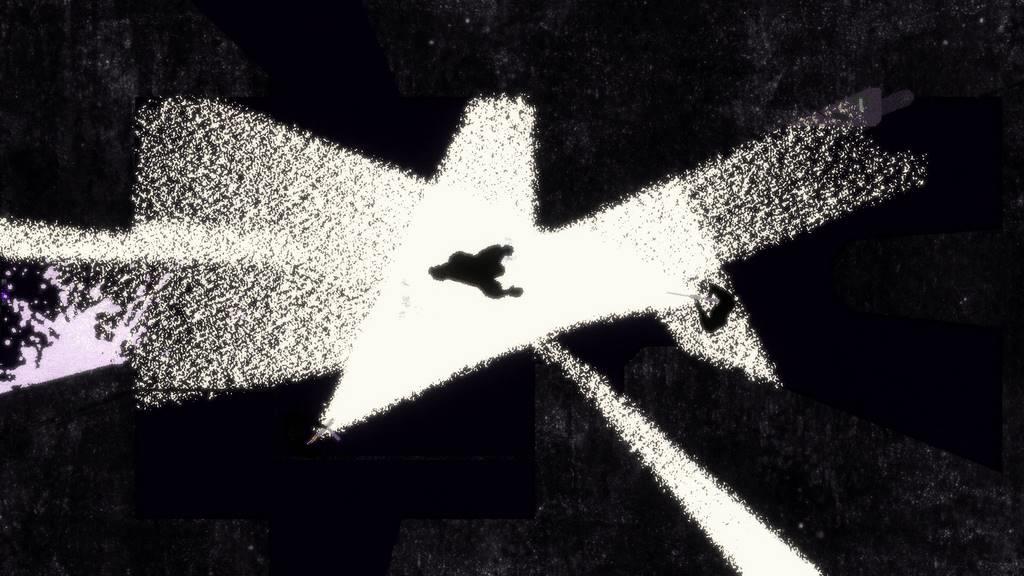 Ape Out has a distinctive urban pop-art appearance, as if the whole game was built from high-contrast construction paper. Everything has vivid, hard-edged, no-outline silhouettes, and what’s even better is that the color palette and visual effects change as you progress through the game’s four 8-level campaigns. For example, in one level I knocked out the power, which changed the base level color from gray to pitch black. The bad guys started using searchlights, which looked like living chalk rubbings on the construction paper background. I cannot describe how stark and pretty this looked. The whole game is just as visually compelling as that one level, and it proves that if a developer has the talent and work ethic, the Unity engine can pull off a supremely beautiful game. This will be that one game you fire up to impress your non-gamer friends. The impression it leaves is immediate and unforgettable.

The sound design does just as much heavy lifting as the graphics, if not more so. Everything but the sound effects is comprised entirely of freestyle jazz percussion. Matt Boch developed a procedural algorithm that constructs a dynamic soundtrack on the fly by selecting from thousands of percussion samples. This means that the snares, cymbals and bongos will mimic what you’re doing second-to-second. Thrashing a crowd of bad guys gives you a cathartic series of crashes and fills, whereas retreating, sneaking or hiding will maintain a tense, low march. The combination of the eye-catching visuals and adaptive soundtrack give Ape Out a very distinctive audiovisual “flavor.” It’s like a living, moving artefact at an avant-garde gallery, aggressive yet alluring.

This makes Ape Out highly artistic without being pretentious, something more indie games should aspire to. There is no moralizing message here, other than that it’s a very bad idea to abuse an intelligent, powerful animal. Rather it’s the talent on display here—gameplay, visual and musical—that clearly demonstrates that Ape Out is undeniably a work of art. I’m calling it now: Ape Out is the next Braid, the next Binding of Isaac, the next indie game that people will be playing and talking about for years. It’s at the top of my “most surprising” games of 2019, and any gamer worth their salt needs to pick it up.

Ape Out is that rare mix of great art, sound and game design. It’s a short but addictive experience with challenging, satisfying gameplay and an audiovisual style that instantly grabs your senses and doesn’t let go.