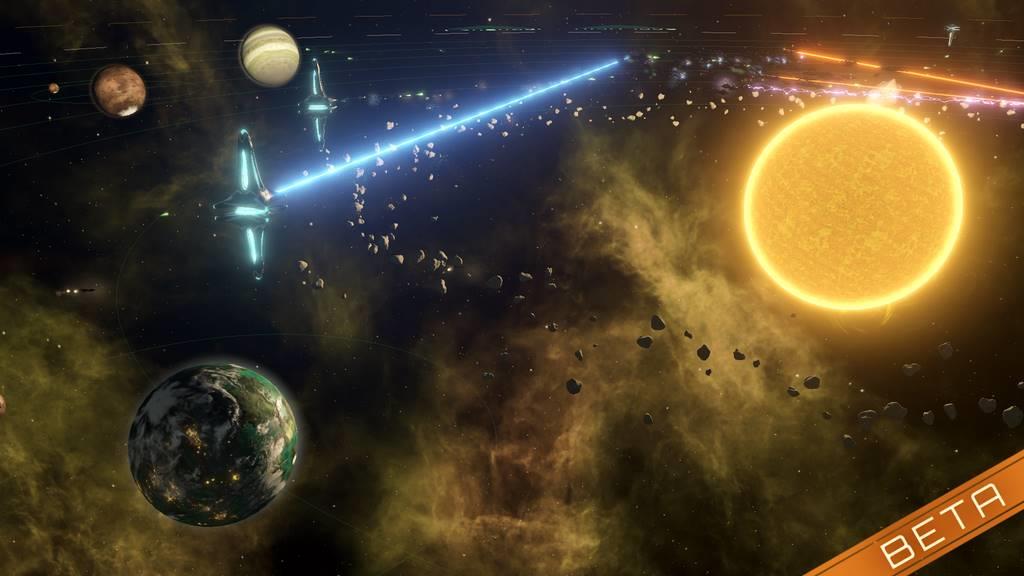 Explore, expand, exploit, and exterminate. These are the foundations of of a 4x game. From humble beginnings to a sprawling empire, a turn at a time. The best of the genre trap players in that "just one more turn..." philosophy. The gold standard probably being the Civilization series, with Distant Worlds, Sword of the Stars, and Endless Space or Endless Legend being great examples of other top offerings. Besides the similarities of gameplay and addictive feedback loops, what else do these great games have in common? None of them are playable on consoles.

Enter Stellaris: Console Edition. Now off the bat, some might argue that this is more of a Real Time Strategy game because, well, the gameplay doesn't actually happen in turns. Fact is the primary gameplay loop of Stellaris is to explore, expand, exploit, and exterminate even if that doesn't take place over clearly defined turns. You can debate that away to your heart's content, I won't be joining in.

Among its PC peers, Stellaris is often thought of as a bit like 4x lite. It forgoes some of the more nuanced micro-management that I actually find to be a detriment to the genre and provides a streamlined, more simplistic experience. You won't get lost among a legion of ships and base units, more like a handful of base models with straightforward purposes. Where the variety creeps in is from the ability to customize the load outs of the vessels. So it's easy to pick up but does provide depth in the customization. Resources also aren't very difficult to wrap your head around. You've got Minerals as a primary currency to buy and build things, Energy to power your constructions, and Influence to provide a check on reckless expansion. If you don't have the political capital in Influence you can't just stretch your borders ad infinitum.

While some from the PC world might turn their nose at this streamlined base game, I think it lands rather safely on consoles. Most hardcore 4x players won't be playing on a console and most console players won't be playing 4x. Not to say there isn't crossover, but each are going to gravitate towards the tools and game that best suits their styles. 4x players on console will also have a PC and that's where they are going to land up that 4x fix. Console players dabbing into 4x will probably not abandon their other FPS and sports titles but will find this game as part of a rotation of very different experiences. For Stellaris to be the game to sit in that gap, it makes sense that it is the one that offers that bridge of a slightly toned down and more welcoming experience to ease in and out of. 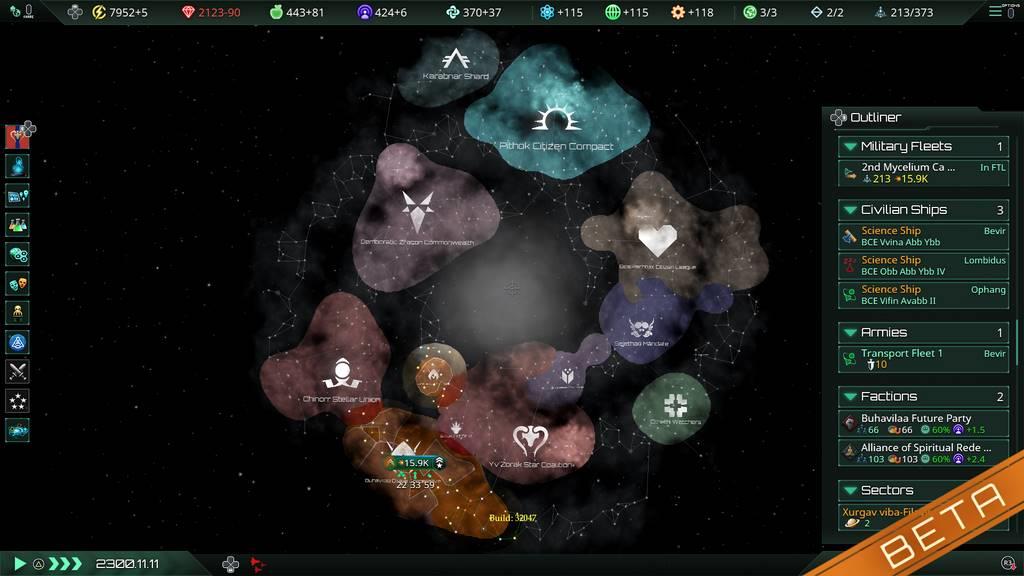 But the crux of a PC port often comes down to the control scheme. Mouse and keyboard vs. controller offers two very different interactions. I have reviewed ports that just got this all wrong and it can nearly ruin the experience in and of itself. To that I am very pleased to announce that Stellaris: Console Edition absolutely nails the translation. Your major points of interest and actions are all mapped to a side of the screen (top, bottom, left right) and simply mashing down on the corresponding control pad options boosts you right into that workflow. There is a cursor but once you start getting comfortable with the X to enter, O to back out, thumbtack clicks to focus and zoom in/out and control pad buttons, you will leave the awkward cursor motions behind. All instructions are laid out in the tutorial tips as you play and on-screen in a small overlay next to the desired actions themselves. The feedback loops are all there to make the navigation second nature.

Graphically the game is on point. The UI is informative but not distracting. If you spend the entire game playing at 10,000 foot view you will miss the details in the units and interactions but zooming in does reveal some nice little touches. The music however really starts to stand out. For the most part is is just there, not getting in the way and setting a purposeful tone across a game that will sprawl hours and hours of play, even in a single session. But every once in a while it will crescendo up into your consciousness and make you want to even pause for a beat end just enjoy it. It's composed by Andreas Waldetoft and the man really channeled his inner Hans Zimmer to create something wonderful. 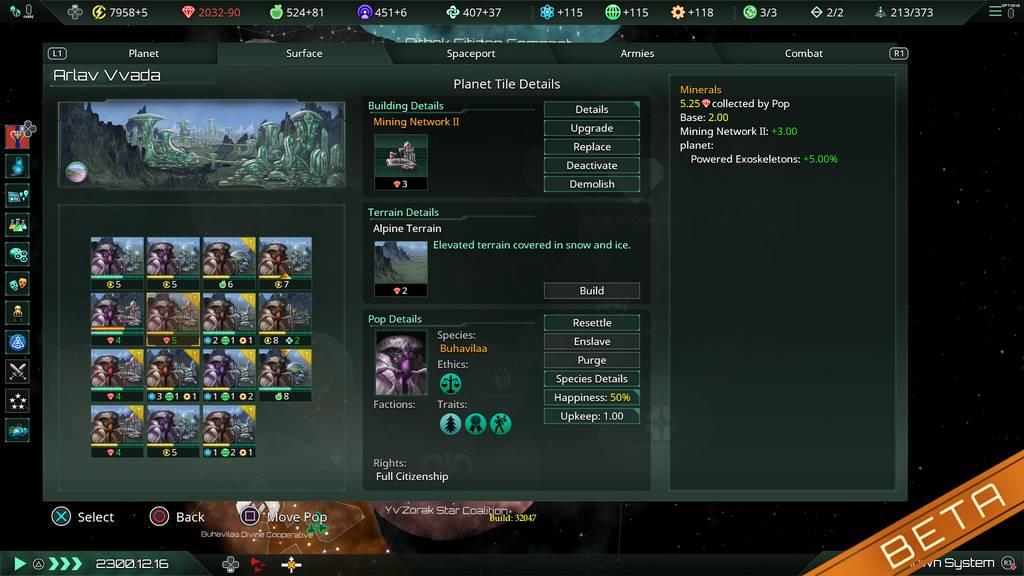 But it's not all praise, rainbows, and roses; Stellaris does have an Achilles Heel. Pick your race (human or alien) choose your starting government and perks, map size and other AI options, load up a new game and get to exploring. You're going to cruise along, everything will be going great. You'll start to learn the hard way not to overextend your energy resources. You'll start to find the balance of just how many science vessels you need for exploration and research vs how many construction vessels you need to undertake the project they discover. You'll meet aliens, make a few friends, sign a few treaties, but eventually you will hit that mid-game slog. Stellaris has a mid-game problem and it is a big one. It takes a long time to suffer through the middle of any campaign. In my opinion the culprit is the Influence resource. You can't really mine it, it is way too easy to run a deficit, and extremely hard to crawl out of that whole. It feels like a very artificial governor on expansion only meeting out slowly the opportunity to do so despite other resources available and any past successes. For everything Stellaris does right, and that's a long list, it really gets the pacing wrong on the mid-game.

But then comes the end-game. Basically, what happens as you near the win conditions is some massive cataclysmic shift in the whole structure of the game will drop on you. This is called the Endgame Crisis. This could be a robot rebellion or an invasion from an inter-dimensional fleet. Just when you think you have the map whipped, the rules change to provide one final hurdle to really test your mettle. It's a great change-up from the typical 4x endgame that usually just sees and acceleration towards an inevitable conclusion as the rich get richer and all players with less wealthy empires are swept aside. It's a fantastic little touch that really does make the game stand apart as an entry into the 4x genre on any medium.

This is the best 4x game to grace the current generation of consoles, possible the best 4x game to grace any generation of consoles; but that's kind of like winning a race when you were the only genuine competitor. It still suffers greatly from a frustrating mid-game but if you've got the itch to explore, expand, exploit, and exterminate on a console this will scratch it.

It plays like the PC version, only it doesn't include the half dozen expansions released over the last 3 years. But for a console game, the conversion of the input scheme over to a controller was a masterstroke. For that alone it deserves every bit of credit the original release got, plus a small bump for the excellent port. If the Metacritic score for the PC base game from 3 years ago was a 78, then add another 2 points for the control scheme and let's call it an 8.0.