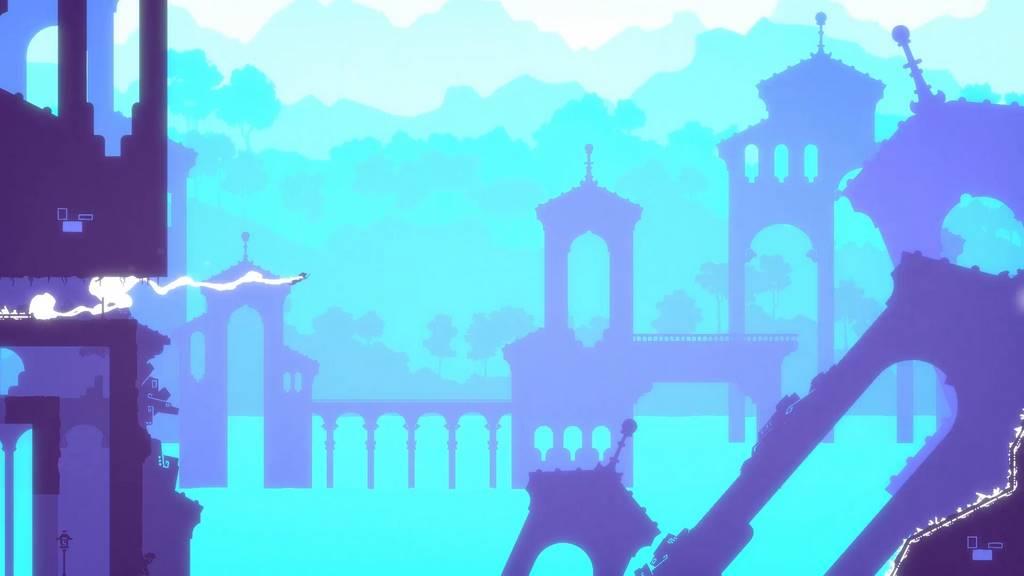 The cage is always there. At first you find yourself in a dream; you sweep great, carefree arcs through the sky on invisible wings. But then you hit a wall. A great, endless, white wall. As it begins to shrink, you realize that it’s a circle, and that it’s closing inward and trapping you inside. Soon there’s barely room to breathe, let alone fly, and still it shrinks and threatens to crush you inside—

Then you wake up, and now that you’re back in the real world you might not notice the cage at first. You can no longer fly, but you can run and jump with the best of them. Eventually, whether it be immediately or later on, you notice the white bars in the background of the city—admittedly distant, but most definitely there. The cage stands ready to cut off your freedom and exhilaration the moment you quest a little too far.

That, I think, is how to describe The King’s Bird. It should be freeing, and by all rights tries to be, but in the end is constrained by its own infuriating need to get the controls exactly right—and I mean exactly.

In the beginning, I thought this game would be right up my alley. It seemed to have everything that I loved in Fe (if Fe were a similar 2D platformer): an abstract plot, a uniquely colorful environment, and dynamic music, to name a few. I am an absolute sucker for music, and this game’s soundtrack had me hooked from the get-go. It’s so fitting, right down to the melodic trills that come from the characters’ mouths in lieu of dialogue. In the beginning of the game, after you wake from your dream-turned-nightmare, you are given free roam of the city, with no real direction or objective, allowing you to leap and slide until you reach the confines of the cage that ever looms in the background. The music follows you, shifting subtly as you traverse the buildings, as you reach the cage, as a strange figure enters the city from the outside of the cage—which, by the way, isn’t yet possible for our protagonist—and finally, as you gain the ability to break free, the music blossoms. It matches the moments in the game with a precision that is hard to attain in such an abstract game, and in that The King’s Bird succeeds in leaps and bounds. 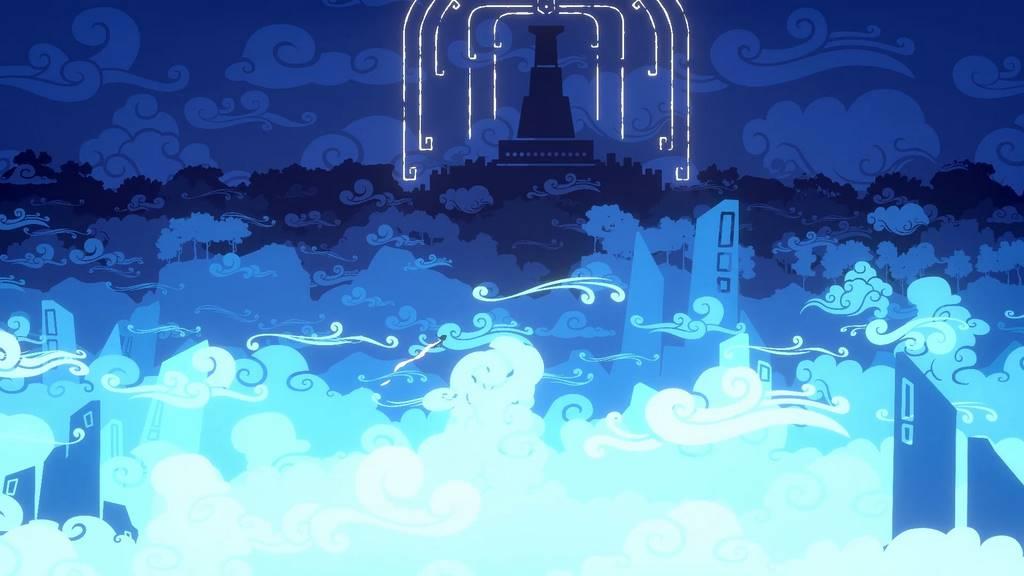 My downfall came about soon after I escaped the cage. Running around the city, you get a sense for the running-based controls, such as wall jumping and sliding down hills; tutorials are given to you via small images spread at appropriate points in the 2D landscape. They’re almost hieroglyphic in their lack of words, and I figured at the time, “It’s a bit difficult, but there’s a learning curve in most everything. It’ll be fine.” Once you gain the ability to fly—or rather, glide, since everything is very momentum-based in this game—you escape the cage to find yourself in a second tutorial of sorts, this one detailing how to master the flight-based controls. Again, I had some difficulty, but figured I would get the hang of it. And I did. Mostly.

This second tutorial area leads you to a hub, from which you can visit many different worlds and levels. I kid you not, in the very first level I was driven to my breaking point by frustration. I knew the controls by this point, and was in theory doing exactly what I needed to do to, say, jump over a gap or slide around a loop. However, I very quickly discovered that if I was the slightest bit off—if one of two concurrent button presses registered a split second before the other, if I didn’t move the stick on the Joy-Con at just the right angle, if I lost the slightest bit of momentum while I was gliding in the air—my movement would fail, and I would be returned to my last checkpoint. This caused me to spend about half an hour of stubborn jumps and subsequent falls in the very first level I tried.

Up until this jarring realization, I had been enjoying the freedom of this game. Do you know that satisfaction you get in games like this, particularly freerunning or speedrunning ones, where the game’s very movement is designed to make you feel light and free? Where your avatar’s movement is so fluid and perfect that it looks like you’re dancing in midair? Where you let out an audible sigh from your couch because my god, I couldn’t have threaded that needle any more perfect than I just did? That is exactly what I feel like this game, especially in its Switch iteration, is trying to evoke, but it’s bogged down by its need for precision. That freedom and satisfaction is interrupted every time you have to repeat a section again, again, still again, until it goes beyond “I need to practice this part” to “Please, I beg of you, just let me make it to the next checkpoint.” It becomes tedious and frustrating, especially when you know darn well you’re doing exactly what you need to do. 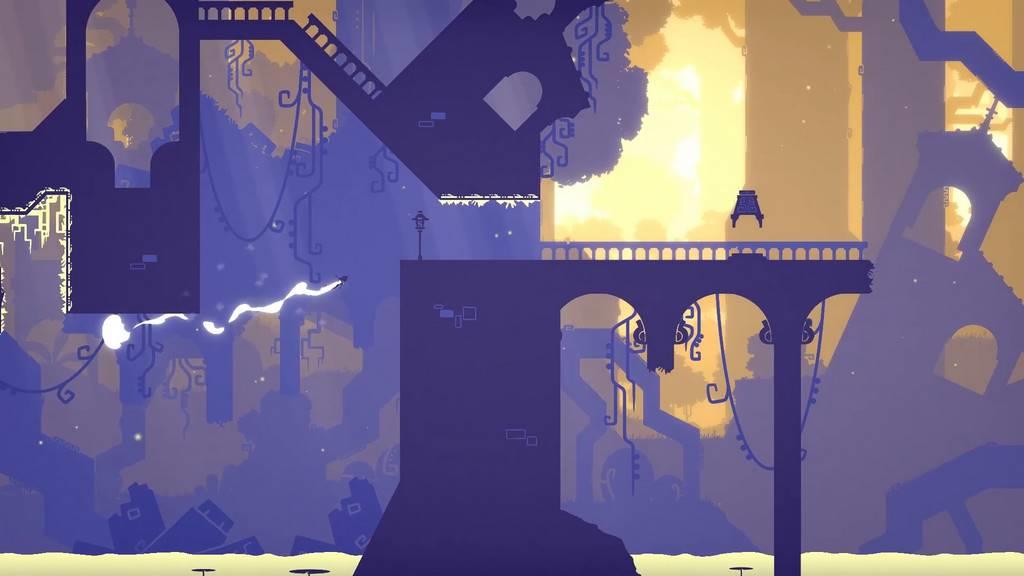 The little floating collectibles in each level are…a mixed bag. It’s certainly nice to be able to visually track my progress, and to have an objective in the game other than just “complete every level.” Plus, it’s kind of cute to see them drifting along behind me as I leap and glide throughout each level. However, some of them are very difficult to see against the background, and I only see them after I’ve passed them. It is possible to go back and get them when I notice them, but going forward is a heck of a lot easier than going backward. The checkpoints are unique in that you respawn at the last checkpoint you touched, rather than the one that is furthest along in the level, which can either help or hurt you as you’re trying to snag that last little floaty thing just out of reach. And again, we return to that fundamental problem of I’m-hitting-the-right-button-so-why-aren’t-you-doing-what-I-tell-you-to-do.

I will say that the developers countered this critical failing with an excellent accessibility system, one that I ended up fiddling with just so I could get past the first level. There are multiple options available to ease the difficulty of the game, including the ability to glide infinitely, which makes it easy to customize your game to combat your specific struggles. In addition, so long as you don’t leave the level, you resume after a fatal fall very quickly; we’re talking less than seconds here, and this game is pretty forgiving with its checkpoints on top of that. 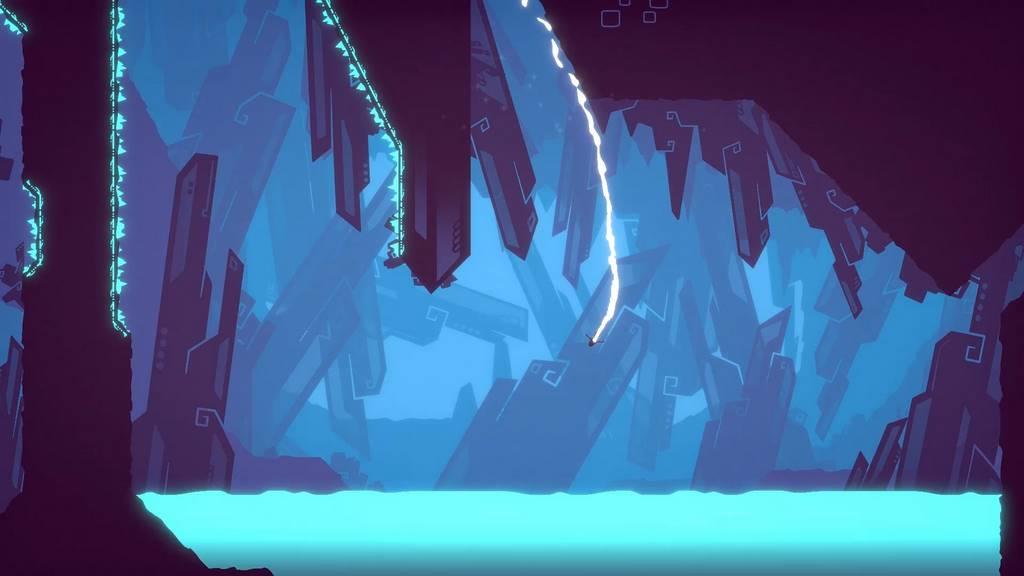 All this was executed very well. There is absolutely no shame in tweaking accessibility settings or lowering the difficulty of a game; games are meant to be enjoyable, and there’s no sense in taking that enjoyment away by throwing yourself at a brick wall over and over again. I get that. That being said, if most people cannot play a game without fiddling with the accessibility settings—and despite my own difficulty with motor skills, I have seen multiple other people share this concern—then there is an inherent issue with the mechanics of said game.

I can tell that The King’s Bird isn’t meant to be difficult, and it in no way is a Dark Souls type of deal where the selling point is its difficulty. If the controls were a bit more forgiving and fostering of the spirit of freedom and flight—because if you’ve ever used a joystick, you know that precision isn’t the name of the game compared to a mouse—then I could fully get behind this iteration. After all, the design and the music are masterfully executed, evoking that minimalist, otherworldly feel that I love to see in games. As it stands, though, the frustration completely undermines the freedom of speed and flight that I want to feel, so it seems that the game and I are at an impasse.

The King’s Bird has the potential to be wonderful—and in its art and music, it is. Based on that alone I would play it all day. But the sense of freedom it is trying so hard to evoke is held back by its finicky controls, and since the game’s very foundation is meant to be freeing, it falls short. Altered controls and a slightly wider margin for error, especially on console, would really let The King’s Bird soar beyond the confines of its cage, and boost its mechanics up to the high tier of its design.