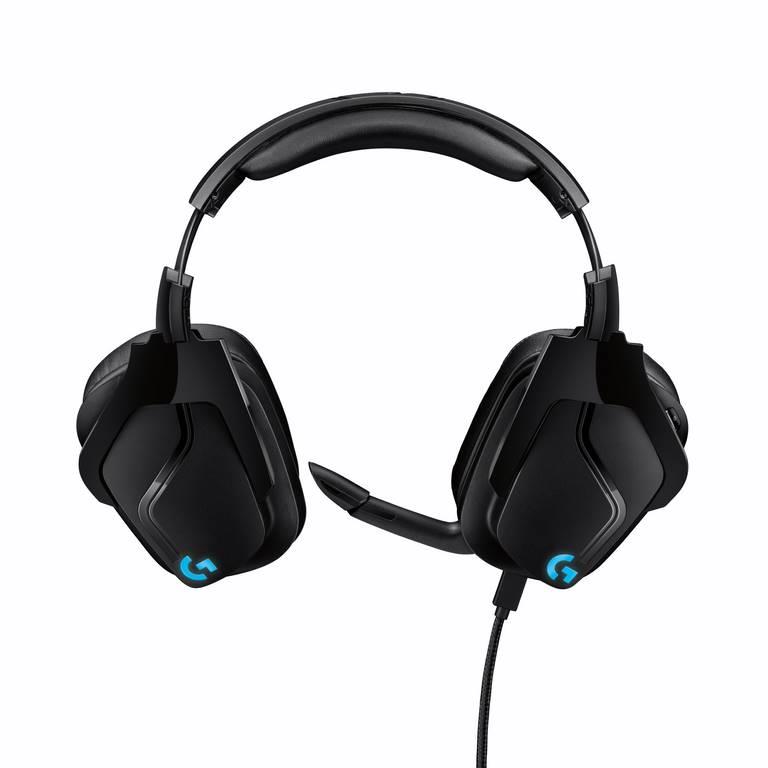 I had modest expectations when I volunteered to review the Logitech G935 7.1 LIGHTSYNC headset. I have always loved Logitech mice and keyboards, but it wasn't a brand that I associated with audio products. The other thing working against Logi's new headset was that I've been spoiled for years by a pair of Astro A50's which cost nearly twice as much.

The G935 is a headset that can be used by most any gaming device. It connects wirelessly via a USB dongle to a PC or Mac, and through a 3.5mm cord to a PS4, Xbox One, or Switch. Opening the box reveals the headset, USB dongle, a 2m charging cable, and a 1.5m cable to connect the headset to console controllers. On the outside of each earpad is a magnetically sealed door which stores the USB dongle (left ear cup) or the battery (right cup).

On the back of the left ear cup are three programmable buttons: the power switch, a microphone mute button, and the volume control. The volume and the power buttons are easily identifiable by feel, but the other four buttons take some getting used to. An expandable microphone is hidden away in the front of the left earpad. To use it, you flip it down and then extend it a bit. The mechanism feels well-constructed so I'm not too worried about the long-term wear and tear on the microphone.

The headset is easily adjustable and very comfortable to wear. The leatherette earpads feel pleasant and never get too hot, even after long gaming sessions.

My first experience with the headset was just to plug into an Xbox One X controller and fire up Black Ops 4. I was surprised at how good the sound was. I was able to pick up more sound cues from the game, which helped my situational awareness a bit. This didn't make me a better player, but it did provide more context as to why I was dying so frequently. I experimented with a few other games, like Below and Battlefront II, and came away moderately impressed with what the headphones were dishing out. However, I had yet to unlock the real power of the headset, the Logitech Software. 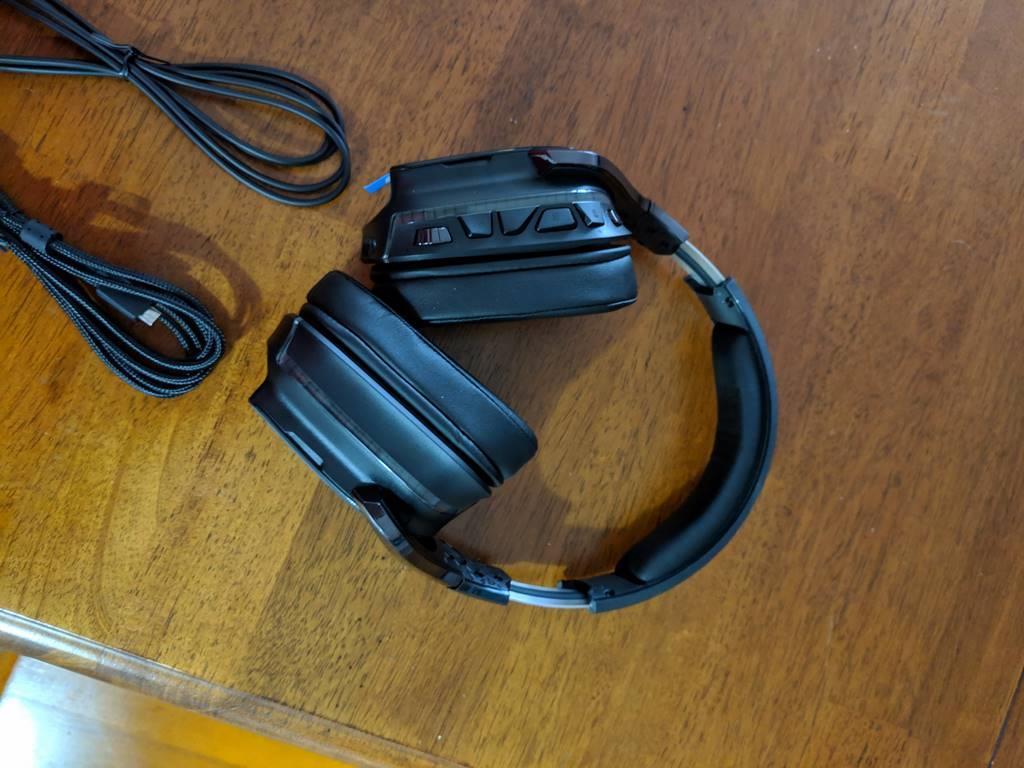 To truly unlock the power of the G935, you need to hook them up to a PC or Mac and use the Logitech G Hub software to tweak the settings. For some reason, surround sound and DTS aren't enabled by default. Within the G Hub you can also adjust the built-in sound equalizer and adjust the lighting pattern for the LED strips on the back of the cups. After spending a few minutes playing around with the settings, I reconnected the set to the Xbox One X and was blown away by the difference in sound. What was a good experience before was now amazing. It still didn't make me a better player, but it did make me realize all the sound that gets lost when you play using just the audio from TV speakers.

One of the best experiences I had was playing the Division 2 VIP beta. As I left the safe house, a thunderstorm rolled in. Suddenly loud booms of thunder echoed around me and it sounded just like being outside in a midsummer thunderstorm. As the rain intensified so did the sound as I could hear the thunder crackle behind me and then boom in front of me. It was a fantastic gaming experience that was enhanced by Logitech’s amazing headset.

The software also allows you to set the programmable G buttons on the back of it. There are some nice options here, like changing the equalizer presets, gaming functions, and even Windows commands, but I never really used them as the buttons are a little chunky. If you're using the G935's on a PC you'll get a lot more use out of them, but as someone who is primarily a console gamer, they didn't do a lot for me. 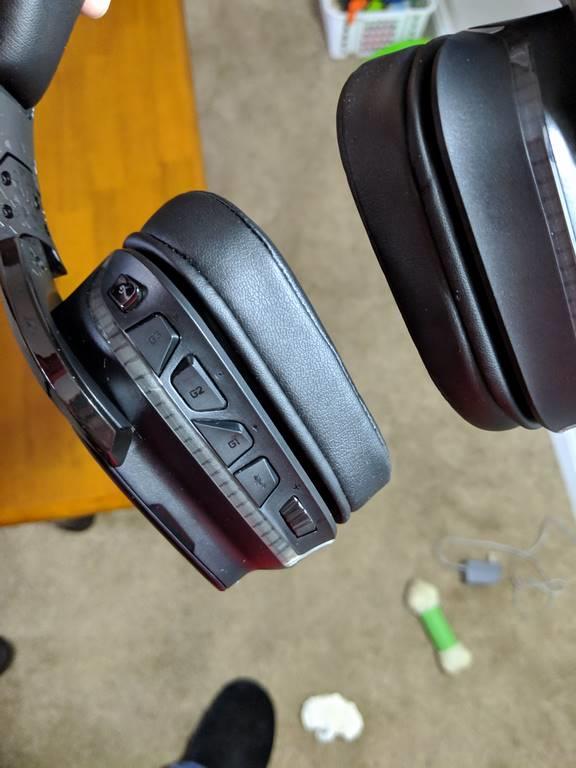 The other thing that impressed me was how crystal clear everything was along the full spectrum. I was expecting the bass to get a little muffled when I cranked it up—but that didn't happen. I listened to everything from Bowie to Daft Punk and it was flawless. I even cranked all of the '80s classics from the Atomic Blonde soundtrack and it was a fantastic experience.

Logitech says that the 935 will get about 12 hours on a charge. My experience backs that up. I never had the headset die on me while playing it. The only times I found the set to be dead was when I forgot to turn the headset off a few times before going to bed. I do wish that the headset turned off automatically after a period of no sound like my A50's do,(see update below)  but the battery is quick to recharge. If you're playing on a console, you can play with a dead battery, but you won't get all of the software magic. As an added treat the logo on the headset changes color while it's charging so you have an idea of when the unit is ready for use.

At $169 the G935 7.1 LIGHTSYNC headset is a good value for the money as long as you have a PC that can be used to tune the headset. I do wish it was smart enough to turn itself off when not in use, but that's really only because I'm not smart enough to remember to turn the thing off.

[Update] The headset does have the ability to turn itself off after pre-set times.  The setting is a bit buried in the G Hub Software and it is not on by default for some reason.  Updating the settings activated the feature which I tested this weekend.

Logitech delivers massive value for the money with the G935 7.1 LIGHTSYNC. The unit provides crystal clear sound and tons of configuration options