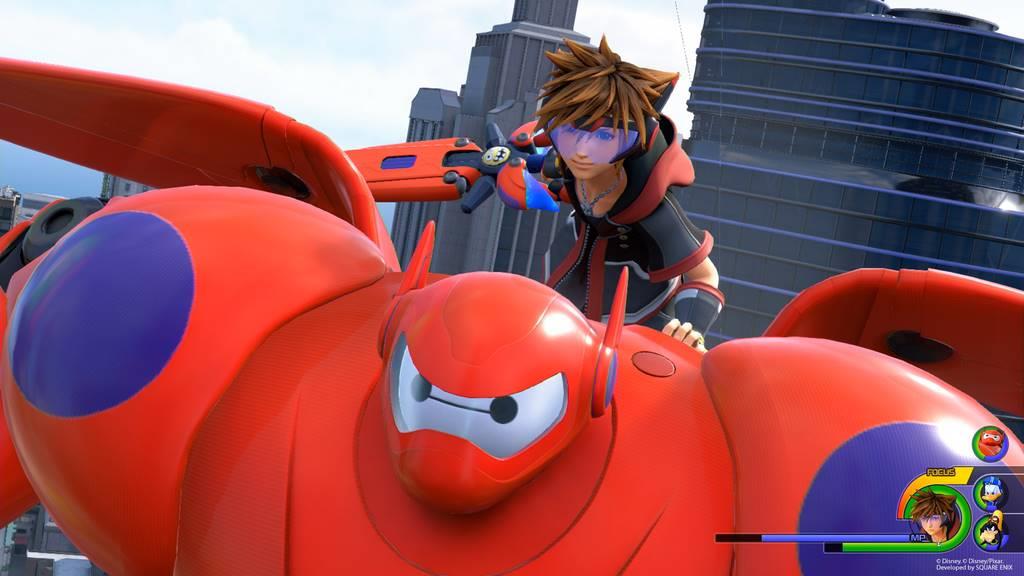 It’s been about 24 hours since I finished off Kingdom Hearts 3. Well, a bit more time will have passed since this gets posted, but I definitely had to let my brain marinate on whether or not the 13-year wait was worth it. Ultimately, no game is worth that kind of wait. I’m sorry Square-Enix, and to a lesser extent, Disney, but after that ending I’m left severely disappointed in almost everything about this game with the exception of the combat, and ‘Face My Fears,’ because that is a bop, and Skrillex and Utada definitely delivered on a track on equal standing with ‘Sanctuary’ and ‘Simple and Clean.’ I’m actually listening to the EP on repeat as I write this. I’m glad that I kept my expectations low for this game, because while there were definitely some high points, and it’s the best that the series has been in terms of gameplay, there’s a lot of story and design decisions here that leave a lot to be desired. Also let this serve as an early spoiler warning. I’m not going to outright name names, but I am going to definitely drop hints about events that happen over the course of the game and how they influenced my opinion on this title.

Now mechanically, Kingdom Hearts 3 is definitely a high point for the series, which we got a taste of with Kingdom Hearts 2.8. The gameplay is definitely smoother, and a lot of that comes from the expansion of the combat system. The new form shifts that Sora has access to makes earning a new weapon feel a lot more exciting than just from the static stat boosts and passive skills we’d get in the past. The movement definitely feels better, and I’ve always taken umbrage with the jumping controls, but now it’s feeling good, along with the wall running, airstep, and flowmotion. If a there’s a particular phrase that fits this game in terms of movement, it’s ‘buttery smooth.’ It’s been a long time coming too, but it feels like it shouldn’t have taken this long to get things this good.

However, on the opposite end of ‘buttery smooth,’ we can talk about this game’s visual performance. As a PS4 Pro owner, I’m disappointed that this game can’t hit a consistent 60 frames per second, and in order to get that kind of performance I actually have to force the system down to 1080p mode. For a better deep dive and analysis of this game, I definitely recommend checking out the Digital Foundry coverage of this game, because it actually clued me in to the best way to play this game. But what’s surprising is that visually there wasn’t that big a difference when switching the console down to a lower resolution. But by default this game’s uneven frame rate and frame pacing make it really hard to tolerate, and using the game’s ‘Stable Mode’ visual setting didn’t really help even when it tried to lock everything at 30 frames per second as there was still noticeable hitching in numerous places. 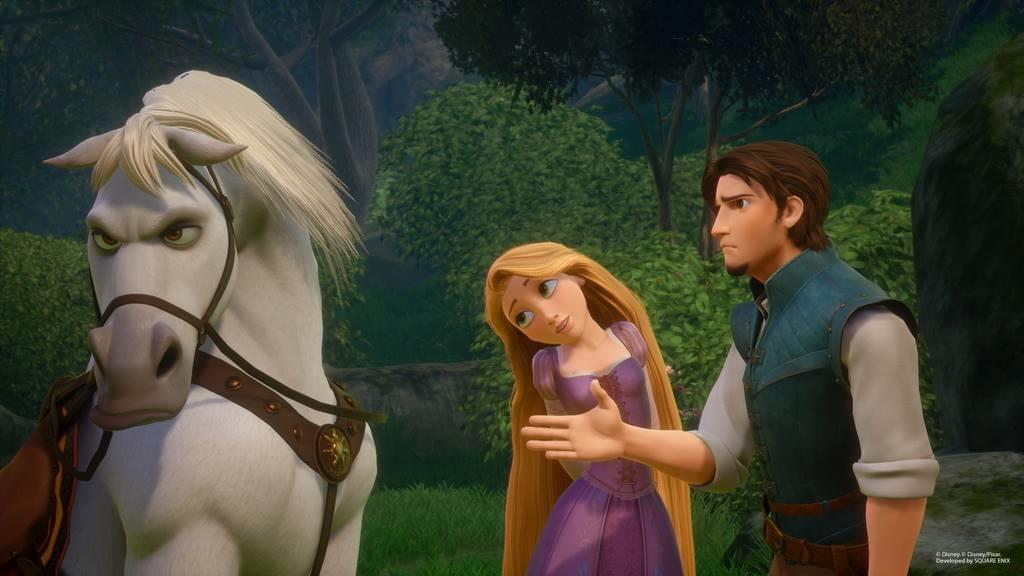 In terms of raw visuals though, kudos to Square-Enix for wrangling the Unreal Engine and getting this game to look as good as it does. This is some of Square-Enix’s best work yet, and coupled with the talented team at Pixar they have definitely delivered one stellar looking game. The set pieces at times are definitely movie quality, and the character’s themselves are incredibly faithful to their cinematic counterparts. The Pirates of the Caribbean world in particular stands out as some of the best visuals in the game. In terms of locales and unique moments, the end-game portion definitely stands out. Hell, even the Gummi Ship portions look great.

That’s actually one of the other high points of this game. The Gummi Ship portions are actually interesting this time around. Having them be a wide open space for players to explore as opposed to the on-rails segments of the past games has made for a much more enjoyable experience. This time around combat is only initiated by flying too close to enemies but they fly specific paths so they can easily be avoided. There’s plenty of exploration to do as well, and it’s encouraged, since the rewards are typically good for finding the treasure spheres or hidden constellations that you have to align with the camera in the Gummi Phone. On the subject of the Gummi Phone, the Instagram-esque updates that accompany the loading screens is a nice touch, and the selfie camera functionality has made for some great images. 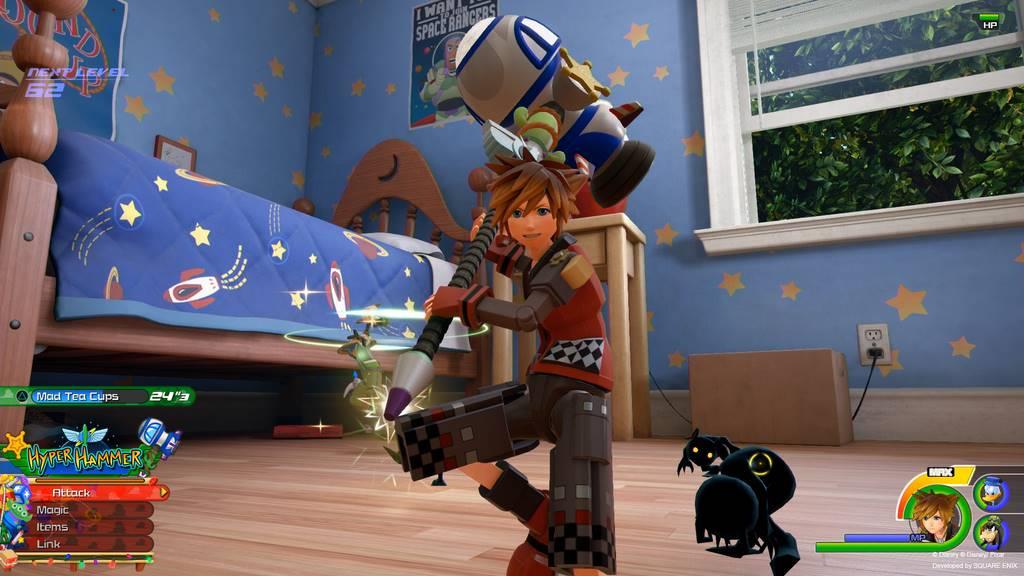 So, I’m left wondering, ‘What took this game so long to come out?’ Given how this game’s story goes down, it’s a little baffling. And by the end, I was actually kind of upset with the outcome of Sora’s grand adventure. The game does a decent enough job of trying to recap players who haven’t been able to keep up with all the side-story adventures, but this mainline entry into the series comes off kind of wonky in terms of where it wants the story to go. So, Sora’s back in his original body, he’s lost all his abilities that made him powerful, and it’s a ‘starting from scratch’ scenario. I’ve always had issues with games that did this, the first Assassin’s Creed game being a particularly memorable offender, and having it happen here is kind of a bummer as well. Granted there would have been no plausible way to carry over data unless it was from the Kingdom Hearts 2.5 Remix game. But regardless, Sora’s back at square one, and he’s got to traverse the multi-verse in order to find ‘The Power of Waking.’ This means revisiting some previously tread ground along with a few new places to meet some new faces. Meanwhile Mickey and Riku are out trying to track down Aqua who’s been in the world of Darkness for about a decade now. Axel and Kairi are learning to be Keyblade wielders, and Organization XIII is trying to assemble their new 13 warriors of Darkness, and Sora’s got his friends making up the guardians of Light gearing up for an epic showdown.

Where the game really loses me is in this sort of ‘shoe-horning’ in of Disney properties. I get it you want to have Disney properly represented here, but for every Pirates of the Caribbean that is a fun journey with a decent retelling of the movie’s storyline but with a teachable lesson for Sora about the power of hearts (and the darkness of hearts within the hearts of darkness powered by hearts), there’s a Frozen world, that simply acts like a vehicle to push that Disney property. I didn’t need to hear Elsa sing ‘Let It Go,’ again, and it really felt out of place in the grand scheme of the story and I certainly didn’t need to make three separate climbs up a mountain to learn about an act of love. I definitely had a good time with some of the worlds, Monsters Inc. and Big Hero 6’s worlds had elements that I enjoyed, and I could definitely make a tier list that would probably differ wildly from other Kingdom Hearts fans.

The overarching path of the story seems to be recap Sora’s situation, throw him into some Disney fodder, and then the real Kingdom Hearts story that we’re all here for. The Final Fantasy aspect of the game has been completely jettisoned (and probably for the better because brevity is not in this game’s vocabulary), with the exception of a few winks and nods. Square-Enix sees you, Final Fantasy faithful, thanks for sticking with them after they snaptured Leon, Yuffie, Aerith, and everyone else completely out of the story. 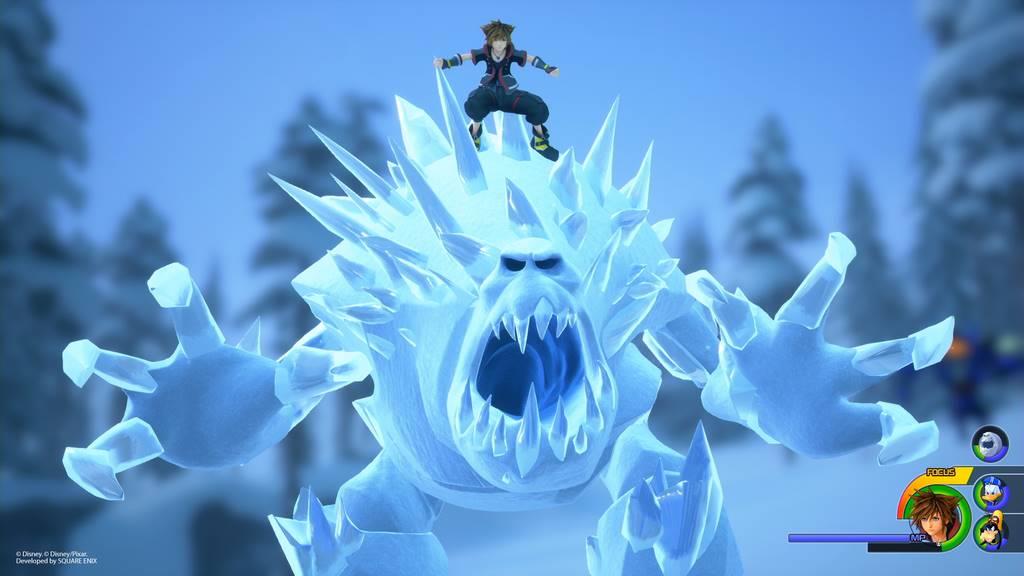 Kingdom Hearts 3 is definitely the end of one character’s storyline, Xehanort, and I for one could not be happier with that. Having him as a big bad who seemed nigh invincible because he was literally capable of anything was really starting to wear on me. But the ending left me somewhat furious with the conclusion. Some characters definitely got the happy ending they deserved, but two characters in particular were left twisting in the wind, and after 17 years, you’d think those two characters at least deserved some sort of closure. And then there’s the epilogue. Suffice to say, I’m tired, and to not have a solid conclusion because this series needs to continue to be milked, because it’s an obvious cash-cow for Square-Enix and Disney, left me feeling more disappointed than anything. I think this series has spun up too many side stories that introduced too many characters with confusing scenarios (there’s two Organization XIII’s now?) that I was convinced there was no way they were going to be able to wrap it up neatly. But shockingly, they actually did kind of pull it off and now we’re at a place where there are only two stories to follow, so hopefully the scenario writers can wrangle this in the future, because I really do want to see this through, despite my misgivings.

Kingdom Hearts 3 is a game that had meteoric expectations placed upon it by a lot of people. And some are going to be happy with what was delivered. I myself don’t count them as one of those people. I think that Square-Enix has done an excellent job technically (despite some missteps), and the scenario and storyline has been condensed into something a bit more manageable, but it still had one last blast of story bloat and while I appreciate this also being a Disney property, I felt like it was saddled or burdened by the current Disney crop of properties to the point that it was there just to pad out the number of hours present on my game clock. Which topped out at just over 31 hours just to see the storyline through. There’s a ton of side-questing to be done (it wouldn’t be a Kingdom Hearts game without it), and maybe I’ll find a bit more enjoyment out of that since I really like where the combat is at now, and actually find the Gummi Ship to be fun. Do I think Kingdom Hearts 3 is a good game, definitely, do I think it was worth the wait, no, not really. So if you’re going to keep this series alive Square-Enix, maybe take note from Hikaru Utada’s song, ‘Don’t Think Twice’ and get it done.

I've gotten some sense of closure after the credits rolled in Kingdom Hearts 3 and it wasn't quite what I wanted, but that doesn't make it unworthy of being experienced. It's hard to say this game was worth the long wait, as the story is still a mess, but Square-Enix showed some real love in crafting this experience. There's definitely some highs, and quite a few lows, but seeing this journey through is ultimately satisfying. And if you've been in it for the long haul, then you'll probably come away pleased.