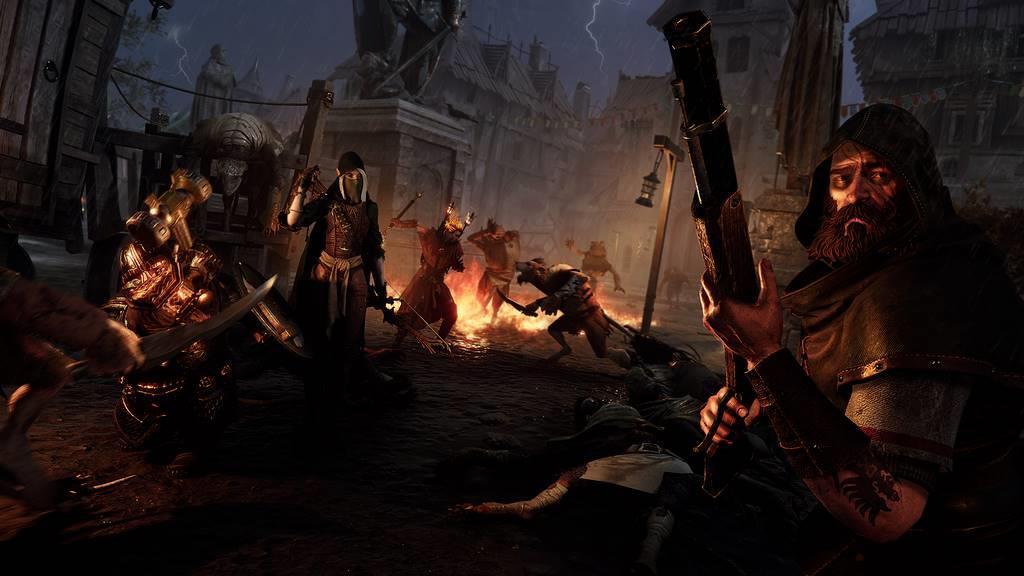 Warhammer: Vermintide 2 is an explosive, bloody, fast-paced, hack-and-slash fantasy co-op game that follows a group of fantasy heroes on their quest to rid the world of the Skaven, a literal race of rats that have come to take over everything. On the surface, it seems to be in the vein of the classic co-op shooter Left 4 Dead. And while the intensity, music cues, special enemies, and quest arcs are obvious turnover from that game, Fatshark does a great job building on it with their own unique contributions. Stats, a huge variety of weapons with even more stats, along with gear, cosmetics, and classes. There are a lot of aspects that go into this mostly multiplayer-centric game, and it pays off in ways that upend players that might have been looking to address their years-absent Left 4 Dead fix (like me).

Let’s get this out of the way first: the thing that irks me the most is the absence of a story, at least in the traditional sense. Every time I start the game I have the option of going online or offline, essentially go co-op or solo. To get more interesting loot and different experience, it behooves one to go online. Luckily, however, I am still able to play solo while online, but it’s complicated. The game’s menu is not the traditional screen of labels and options, but rather a hub world, specifically a castle where players can practice, collect loot, and change equipment and stats. To play a mission, you go over to a book in the corner of the central room and choose whether you want a Quick Play, Custom game, or Heroic Deed. The first is the easiest way to get into a game, and most of the time you’ll be doing the early missions, depending on what difficulty you’re playing. Heroic Deeds are specific missions and subsets that dole out proportionate rewards. Custom Game is the place to set out specific missions and difficulties, and it was here that I learned how to play solo for the first time.

Selecting for a private game with myself as the host, I went about playing each mission of the main game by myself. They were fun and fast, with lots of violence, banter, and interesting scenarios, but I never felt any motivation beyond my own frantic urge to kill as many rats as possible. The game is very much a team-focused endeavor, but on the lowest difficulty, it’s rat-killing time. I got a voiceover intro from a side character detailing the goal of my team’s actions, and we set off. Characters wonder aloud what various cities and ancient forest temples were like before the rat plague, but that’s it. There’s a story here, and the characters and settings are meaty enough to tell it, but there’s no emphasis on actually telling it. And it doesn’t help that I have to go through a needlessly complicated process just to play solo. I went through the exact motions as multiplayer, only absent the unique quality that individual players bring to the gameplay. 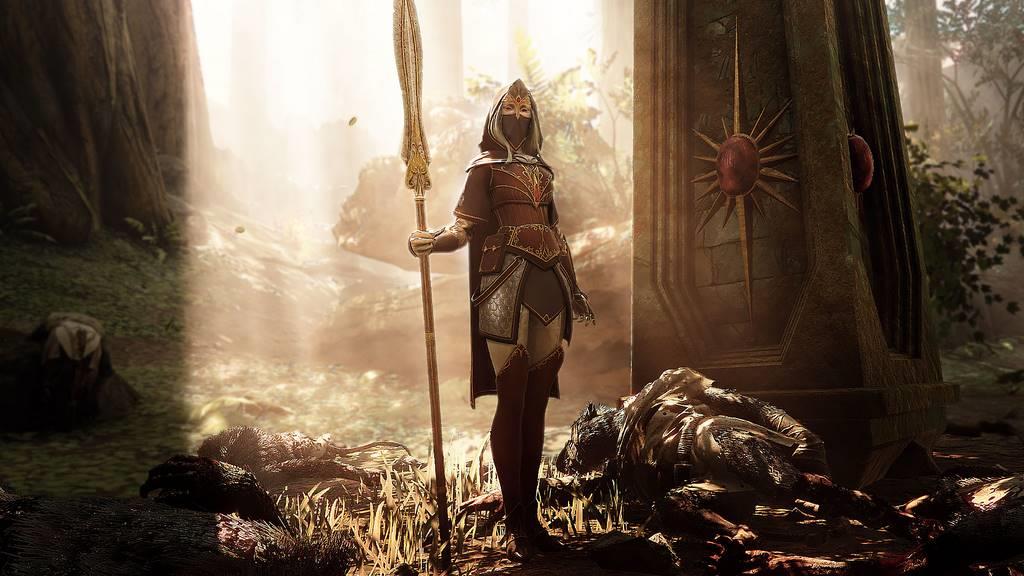 Vermintide 2 has a drop-in/drop-out co-op campaign, but it doesn't have splitscreen for local co-op. I don't know if the tech would prove too much for splitscreen to handle, but this game, being multiplayer-focused, would prove a magnet for that. The lack of such does not detract from my final score, however, as I understand that there would most likely be a legitimate reason for not implementing it. I feel that if the game had a proper story it would be different, but with the focus on multiplayer, I think I understand why the developers went in the direction they did.

The magic of Verminide II isn’t the abundant weapons, world, and characters (although that does account for a lot of it), but communication between players. If there is a genius to this game, it’s that it forces players to work together. On every difficulty, with mounting importance, it you must learn the mechanics of the myriad enemy characters, your own party, the various equipment buffs, and sound cues. As aforementioned, the more you know, the more effective you and your team will be. I found my best matches to be the ones where another player and I were talking to each other. Even if we didn’t win, or someone’s connection timed out, I had a good time. Sometimes, when no one has a mic, I still shout at them by their character names to let them know something important. 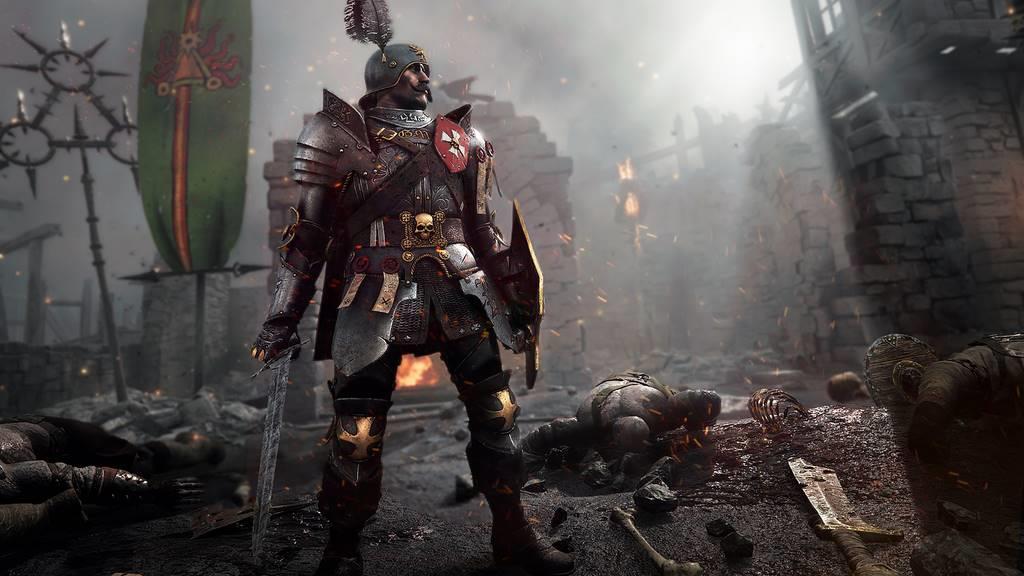 If a player controlling Kruber is low on health, I let them know that as soon as they go down I or someone else will revive them. If I know there is a boss coming up, I will give the dwarf, Bardin, a strength potion, although most of the time I will just call them dwarf. Let’s say, when I hear a rattle and shake, or a whisper and a poof, I will know that either a snatcher or assassin rat is right around the corner. The former will fit a rope around a party member’s head and drag them off somewhere, the former will pin a party member and stab them a lot, like the Hunter in Left 4 Dead. After the player spends enough time with the game, which is pretty much the duration of one or two different missions, they’ll be able to sound these special enemies out, and prepare accordingly.

This changes, of course, with difficulty. Recruit is great for beginning players of any experience, but after enough leveling, it becomes a bore. In order to scale the difficulty, players must collect weapons, trinkets, charms, and other items that build up power. The power level directly corresponds to the difficulty level the player chooses, with the items granting various buffs like increased damage, health, respawn speed, stamina, and numerous other types. The difficulty I am currently playing is Veteran, which comes right after Recruit, and it has proved to be quite the challenge. After the relatively player-lenient slaughterhouse that is Recruit, Veteran is the point where the game starts to show its teeth.

The enemies of Vermintide 2 are harsh, unforgiving, and fast. They force players to think on their feet, play to their strengths, and most importantly, work together. The tactics don’t always work out, as the game is not something that players can just blunder into, at least not on this difficulty, and mindlessly swinging a greataxe to watch humanoid rats and cursed men get chopped in half can sometimes leave a player open to a fatal blow. But things are accomplishable. While I’ve completed Veteran-level missions beaten to a pulp and on my last legs, I’ve beaten them nonetheless. Much of the time, other teammates and I will perish, but, as in Left 4 Dead, players can be recovered before completion of the mission. 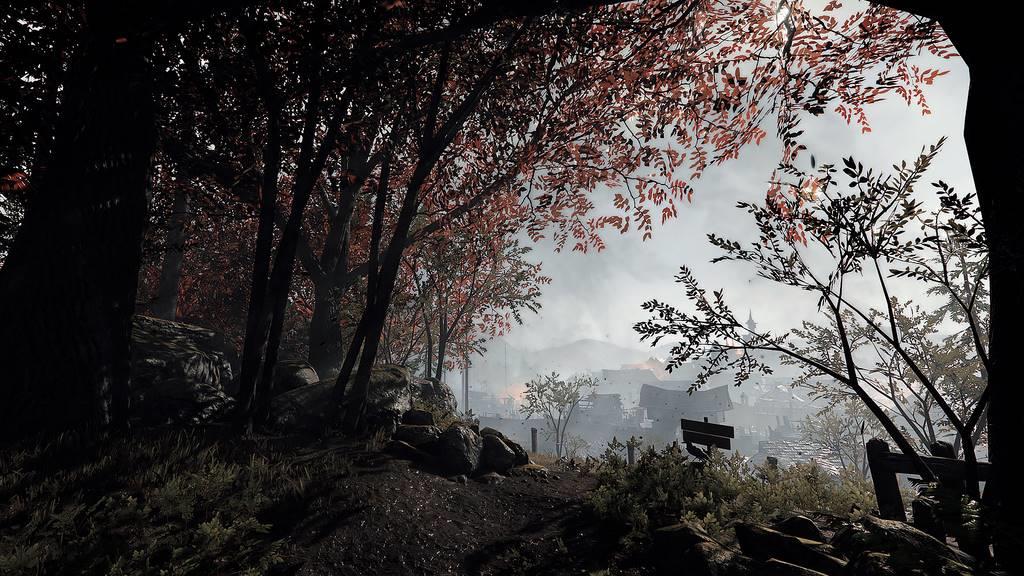 To call back to what unlocks the difficulty levels, the items, and power levels, players do this by unlocking loot box-like items with common, uncommon, rare, or epic level items. Besides the visual aesthetic being very similar to other games with loot box-like rewards—namely a box, and then noises making it as if the box is being opened—there’s not a whole lot to indicate a microtransaction-laden economy, which is something I am thankful for. There isn’t even a convoluted way to unlock cosmetics, with players only needing to play Heroic Deeds (a great gameplay mode that alters enemy occurrences or damage) or high difficulty to unlock things like helmets or outfits. It’s nice.

Accompanying this is a sound salvaging and crafting system. You select some items, hold Triangle (on PS4) to break down said items into crafting pieces. From there, you can craft low-level items and then presumably upgrade them. I haven’t made it very far in this because, for the longest time, I didn’t know that I had to long-press Triangle, rather than just press it, which is what I was doing for a few weeks. 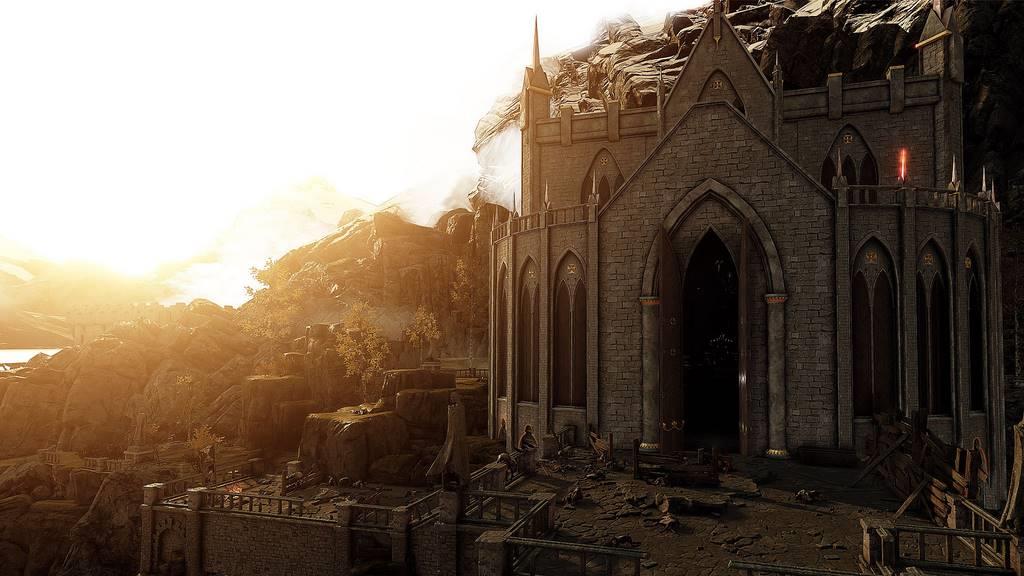 Another nice aspect of this is the level design. Players and their party hack and slash their way through ruined stone cities, ancient Elven forests, Dwarven strongholds, and massive cave systems infested with rats. Although most of these maps will have the players traversing linear pathways, the level designers did a great job of mostly disguising that fact. In city maps, there are small diverging pathways off the main corridor, leading to rooms with loot or secret items like Grimoires or Tomes. The more you collect, the more your score will be upon mission completion. At other times, when there is clearly a visual objective in the map area, other areas will be cut off by immovable debris such as barricades or walls. It’s a natural way to guide the player through the mission. In other maps, like mines, Dwarven fortresses, or caves, it is much more confined, but not in a way that feels unnatural. The relentless enemies have a way of spicing things up and making events unpredictable as well. But the map where the design works best is perhaps the Athen Yenlui, the first in Act II. In it, players traverse a forest home to an ancient Elven temple. In the beginning of the mission, players start at the top of a hill, with a river running downwards. Concealing the art in the artifice, players follow the river to the objective, and more enemies appear in a way that feels natural. It’s a good way of disguising how the map progress of the mission works. Combining level design with world-building, the places feel real in a way that feels fresh.

Vermintide 2 is probably the best co-op multiplayer fantasy action game I have ever played. The systems have depth, the visuals are good, and it feels like the writers and level designers actually care about their product. Now all it needs is some more players to partake in the adventure.