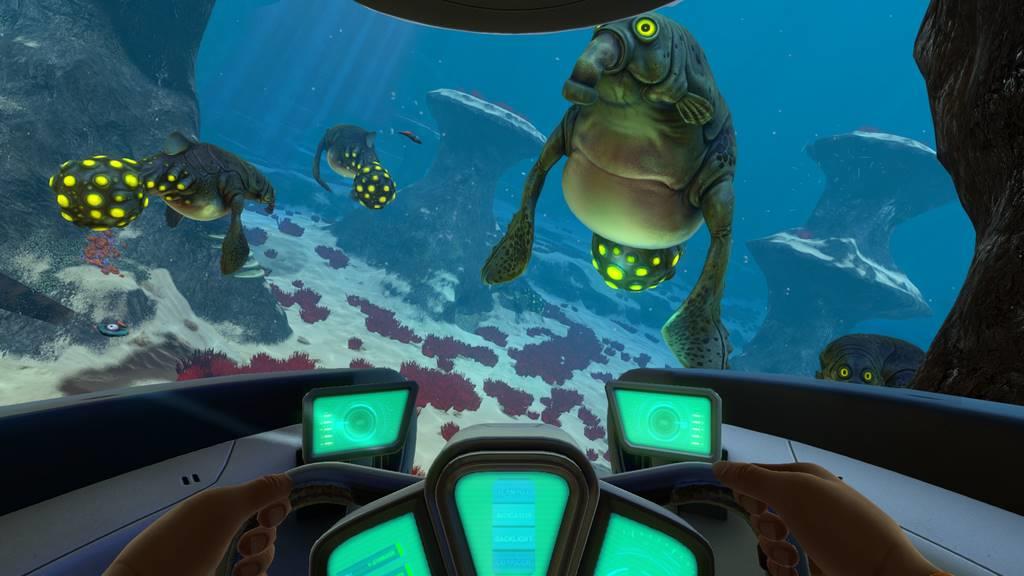 I am not a fan of survival games. Personally I think they are boring, with empty worlds and items that are always difficult to find and craft. Normally I just wanted around aimlessly and get bored quickly. Subnautica changed my mind completely on the genre. What I thought was going to be just another dull survival game, turned into a last minute game of the year of 2018 for me. Between the beautiful underwater world that the developers created, to the intriguing story, this is a game that I could play for a very long time. The game has been available on PC but it's recently made it's way to the PS4. This will be a review of the recently released PS4 version of the game.

The game opens with a very brief introduction. Your space ship the Aurora is about to explode and you manage to get into an escape pod and get out just in time. You crash land in the middle of the ocean on an alien planet. Now go. This all lasts about two minutes and it's perfect. More games should do this. No boring, exposition loaded intro cinematic. No boring tutorial opening level. Just right to game.

After crashing on the planet you notice that your escape pod is in rough shape and pretty much all of the electronics are damaged. Your AI partner instructs you what to do from here and as a tip the first thing you will want to create is the repair tool so you can get the radio and crafting table up and running. Opening the hatch of your escape pod for the first time is such an amazing experience. You open the pod, stand on the roof and see nothing but the ocean for as far as the eye can see. The only other thing you see is the remnants of your ship the Aurora in the distance. The only place to go is down into the unknown and vast ocean. 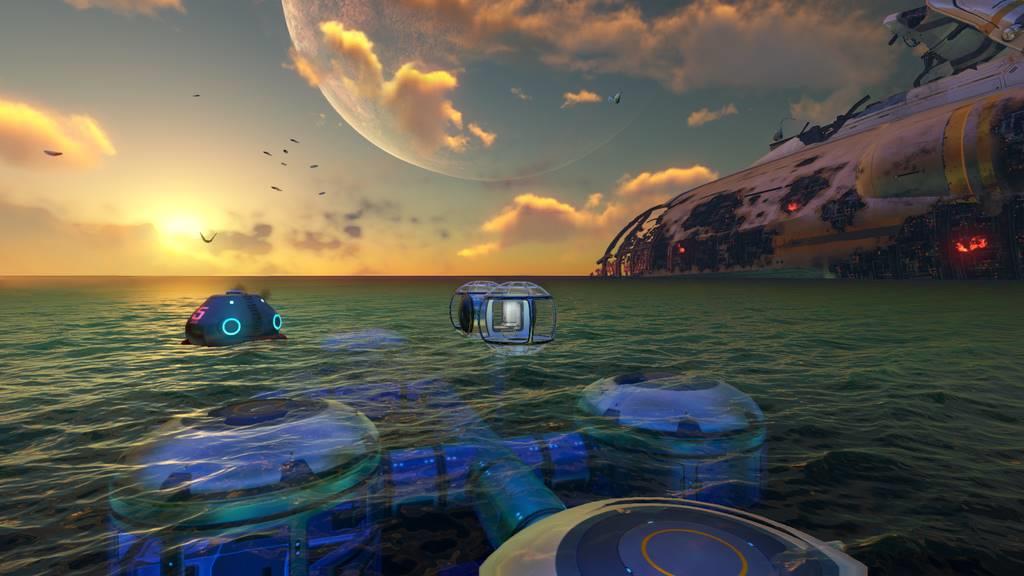 The first time you dip below the ocean surface is an experience in itself as there is a huge, colorful and beautiful underwater world to explore filled with fish, plants, caves, dangerous creatures and much more. This is when you will start collecting items. Almost anything that isn't a giant rock or hard surface can be picked up and used later on. Not only do you need to find supplies to repair your escape pod, you also need to find food and drinkable water as well (there are various game modes you can choose at the start which will turn off the food and water system), which are displayed by meters which are constantly draining. Thankfully, unlike other survival games I have played, finding food and water isn't that difficult. Many of the smaller fish you find underwater can be cooked and there are even some fish which can be crafted into creating drinking water.

You have a lot of space in your storage container on the ship and you can carry a lot of materials with you, but those fill up rather quickly. I was forced to create additional storage lockers and place them right outside the escape pod to create additional storage. It's also annoying how you can't drop items unless you are actually swimming in the ocean, forcing you to go into the escape pod, go to the storage locker, grab the stuff you don't want, leave the escape pod, and then drop them. It's not game breaking by any means but can get tiring to constantly have to do this after you return after a long journey. 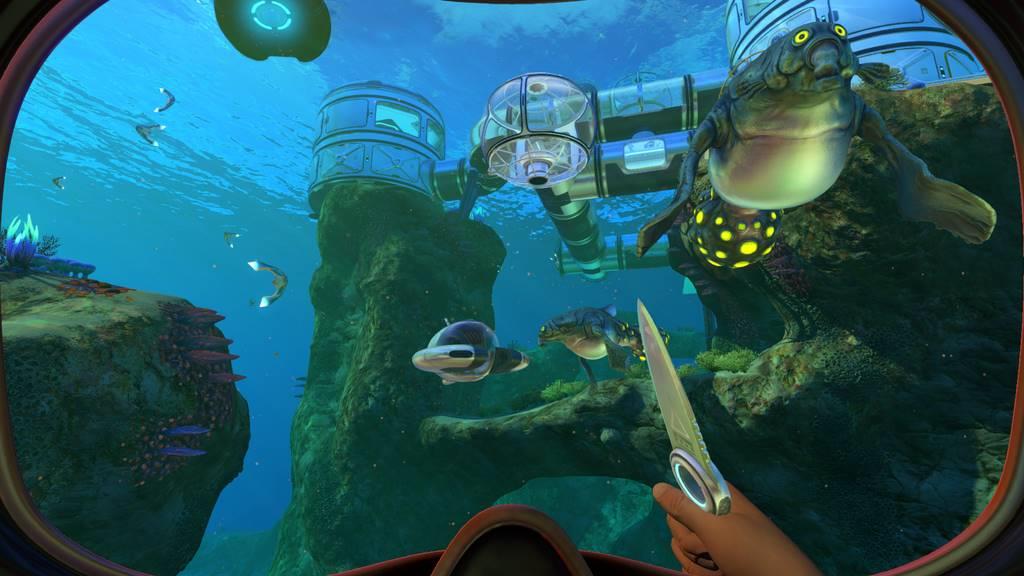 The best part of the game however is it's narrative, which plays out as you play the game. In a sense, you create the story. When you first start off, you will only be able to explore small areas around your escape pod. This is because you only have a limited amount of air in your tank and diving to deep locations will drain the air faster. As you collect more materials, you can create more items which will allow you to go exploring out for longer periods of time such as air tanks with larger capacities, a flashlight, a small handheld vehicle which allows you to glide through the water at faster speeds, which is incredibly helpful for diving deeper under the surface. The more you build and explore, the more side missions start showing up, which of course starts to fill in the blanks on questions you much have such as where exactly you are and what happened to your crew. Once you fix the radio, you will also occasionally get messages like distress signals from the other survivors, messages from your crew out in space, or even, something more sinister.

I honestly want to be a vague as possible when describing this game because the exploration is top notch and discovering things on your own is part of what makes this game great so I don't want to spoil all the surprises. Let's just say that as I was playing, I was having constant "OH S***" moments as I would find a new area, discover something new, or get a new message on the radio. For the most part, you are free to explore the world as you want. There are only a few times in the game where you will have to do something specific. It may be crafting a specific item, and there are even times where you may be on a timer and have to go somewhere in a certain amount of time. I want to be as vague as possible as to not give away any of the games surprises or the story. 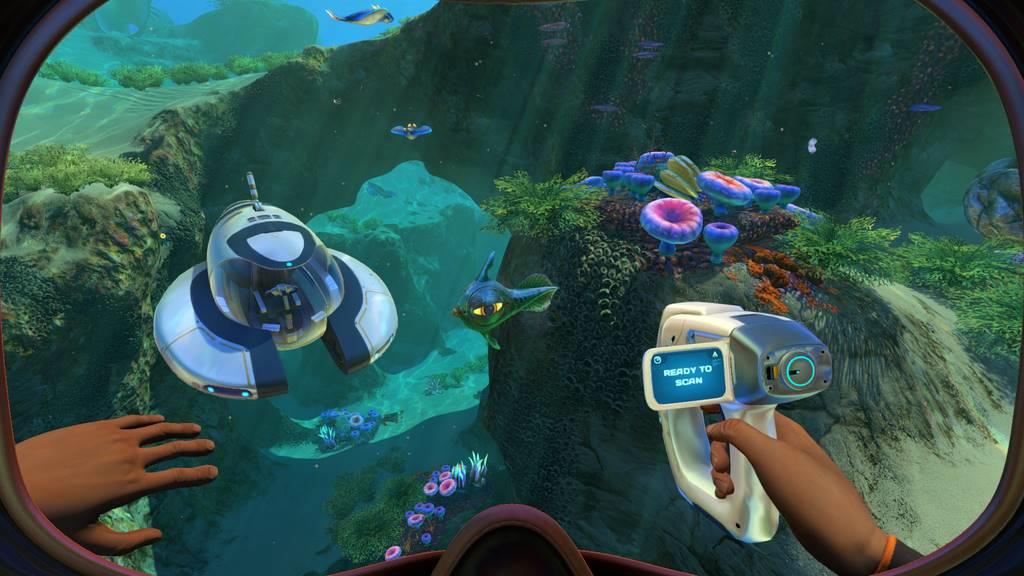 The game also has an amazing atmosphere. I always had this constant feeling of dread coming over me while playing especially when diving into new locations. You will be presented with some big creatures at the beginning of the game that you will want to stay clear of but it's when you venture into the unknown and start hearing loud growling, screeching and other noises that you haven't heard before. The game also has a day and night cycle and let me tell you, there was nothing more terrifying than slowly watching the underwater area that I was in turn completely pitch black as the natural sunlight fades away. Even with a flashlight, it can still be terrifying as you can only see a couple of feet in front of you.

The more you play, the more you realize that traveling back and forth between your escape pod and places you want to visit gets tiresome. The game even specifically tells you to make sure you pack lots of supplies for long trips. Sometimes I was so enamored with the game world that I would load up on food, water, batteries and whatnot and I would be gone for days at a time. Even then there is only so far you can travel before having to go back to create more supplies. This is where the habitat builder comes into play. While not available at the start, eventually you will be able to create your own living quarters underwater and thankfully the game makes this task easy. The materials you need to build your habitat are pretty easy to find. Much like creating a base in Fallout 4, the game gives you numerous pieces that you can place together to create whatever kind of habitat you want and you can deck out your new underwater home with living rooms, aquariums, observation decks and more. You can also craft important items like the radio, crafting tables and storage lockers in your habitat as well basically giving you a new starting point for when you want to go out adventuring again. 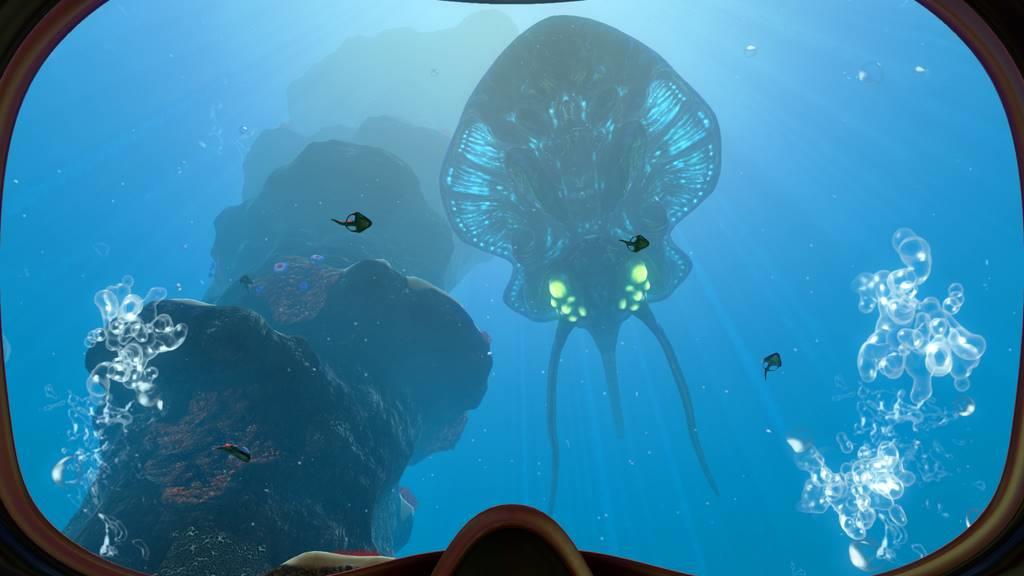 There are some unfortunate hiccups that did wash away some of the fun that I was having. For starters, there seems to be a problem in the game with pop in textures. A lot of the time, things won't appear on screen until you get near them. For the most part it's not that much of an issue. When it becomes a problem is when you need to go to the surface of the water for air. One time I was diving down around 400m and decided it was time to come up for air. I foolishly thought I had enough time but air was running out quickly, so I just started shooting upwards as quickly as possible. All of a sudden a giant rock appears out of nowhere above me and blocks the surface. It was always there, I just didn't see it until I got close and it popped in as I got close. Well now I'm stuck and needless to say, I died. The game also has some FPS issues, specifically diving under water or resurfacing. Sometimes the game will freeze for a few seconds, almost like it's loading. Again, not a major issue but it can get annoying after a while.

Even with those issues, Subnautica is an incredible experience. The kind of games that I love the most are ones where I can get sucked into the world that the developers have created. Subnautica did just that. It is such a beautiful world that no matter how terrified I was, I wanted to keep on exploring. I wanted to go deeper and deeper down, into all of these caves, finding all of these new creatures. I couldn't wait to get another message on my radio to advance the story and find out what exactly is going on.

Aside from a few technical issues, Subnautica is one of the best survival games out there. Not only is the world to explore beautiful but the narrative will keep pulling you along,