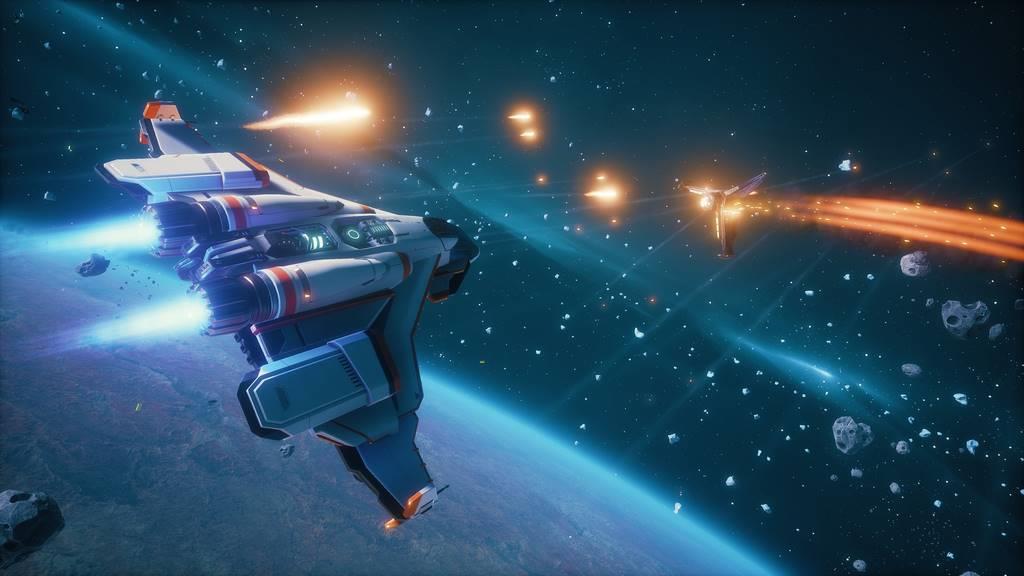 Everspace is an interesting game when it comes to its style of gameplay that I’ve only personally seen a couple of times, coincidentally in other reviews for Gaming Nexus.  Similar to games like Vertical Drop Heroes, Everspace is a game where you attempt to make progress only to die rather quickly depending on how skillful you are.  You then get to start from scratch, except you get to use the money or skills you earned in your last run to help improve the next run.  Where Everspace differs is that we’re now adding space dogfighting into the formula.  While Everspace has already been released on the PC and other consoles, today I’ll be taking a look at the Nintendo Switch version.

While there’s not much to the story, you play as a character who has amnesia and slowly during the course of the game you begin to regain your memories including what your name is and exactly who you are.  Essentially you’re a clone of a dying scientist named Adam Roslin and are tasked with reaching various coordinates in various areas of space that are still populated with various outlaws.  Conversations will take place during the cut scenes between sectors and during stages with a robot assistant named HIVE.  The clone aspect actually makes sense considering the gameplay style that Everspace takes on, which I’ll cover that in a bit.  Beyond that, more of the story will play out as you reach a new sector for the first time.

As for the gameplay itself, the game takes place over several sectors with several procedurally generated zones in each.  Before each zone you can choose your route, but early on you really don’t have much of a choice in the path you take.  Once in a zone you basically fly around looking for resources while keeping an eye out for any hostiles in the area.  While flying around you’re ]looking for a couple of things such as resources to mine, a possible secondary objective that may pop up, and your primary objective of jumping to the next zone.  Each thing you can do is indicated by an icon on your HUD, be it a blue dot for resources, red and yellow/orange triangles for nearby hostile and neutral ships respectively, or a big green dot showing your jump point.  Pointing your ship at the jump point will see a number start to rise from 0 to 100.  Once it reaches 100 you’ll go back to the sector map and choose your next zone, given you have a choice at that point.  You’ll then head to the next zone, but at a small cost.  Each jump takes a certain amount of fuel and if you don’t have enough, you’ll have to find more in the current zone.  You can try to jump without the required amount of fuel at the risk of damaging your ship when you come out on the other side.  In addition, if enemy ships hit you while you’re trying to jump, the process will take a little longer.  The portal in the final zone of a sector doesn’t require any fuel to use, so no worries about that. 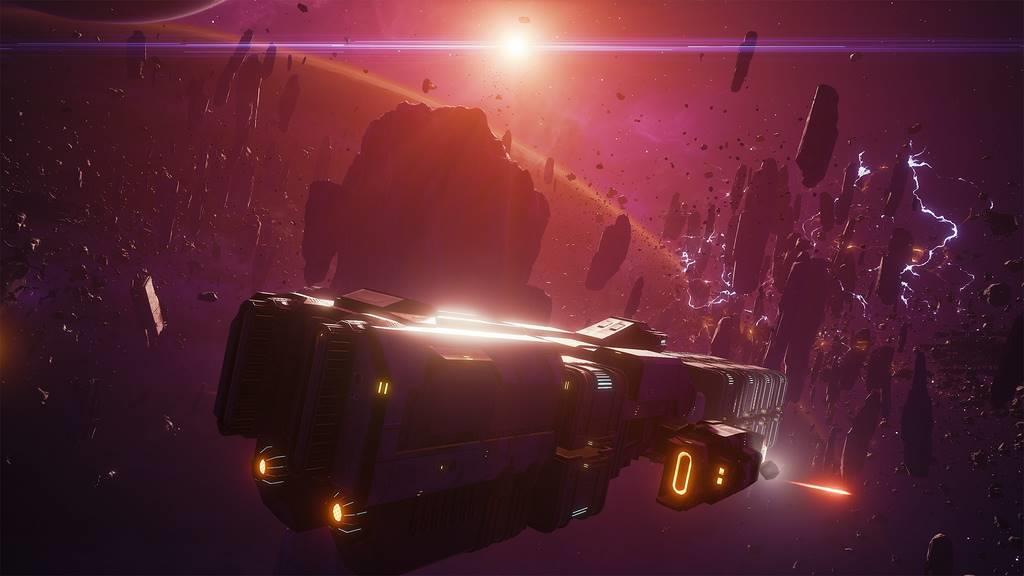 Your ship isn’t defenseless by any means.  You’re initially equipped with a Pulse Gun that’s good for taking out shields, a Gatling Gun for damaging hulls, missiles that you can fire once locked onto an enemy ship and they’ll home in on it, and weapon and shield boosters that can increase their effectiveness for a short duration.  During your exploring of a zone you might come across blueprints for other items or even weapons in general.  When you approach a weapon just floating in space you have the option to swap it out for one of the two guns your currently have equipped, and then whichever you don’t want you can either leave it behind or turn it into scrap to use for other upgrades.  You can also find and use nanobots to make repairs on your ship.  As enemies damage your ship, certain systems will start to fail and you can use nanobots to repair them or even repair your hull a bit so you’ll survive longer.  Besides the hull, I’d make sure the sensors are in good shape.  True you need weapons to defend yourself, but it’s pretty much all for naught if you can’t even see the jump portal to get you out of the zone safely when you’re widely outnumbered.

So I mentioned that Everspace is similar to games like Vertical Drop Heroes and here’s how: you will die.  You will get your ship destroyed, many times over in fact.  If you’re like me you’ll get destroyed not too far into the game when a hoard of enemy ships comes at you out of nowhere and all the boosting in the galaxy won’t get you away fast enough.  That’s fine, because for the most part you’re supposed to die.  After each death you start all over from the first sector, but you keep any credits you’ve earned.  Those credits are used to buy upgrades to your ship (or if you have enough, another ship entirely) and anything you buy will also carry over between runs.  The perks include things such as increased fuel capacity, stronger hull, better repair capabilities, improvements to your sensors so you can explore more areas, and so on.  However, credits are “use them or lose them”, and any unspent credits are gone once you launch your ship again.  You can also customize your ship via different colors and patterns and unlock new default weapon loadouts as you progress further into the game. 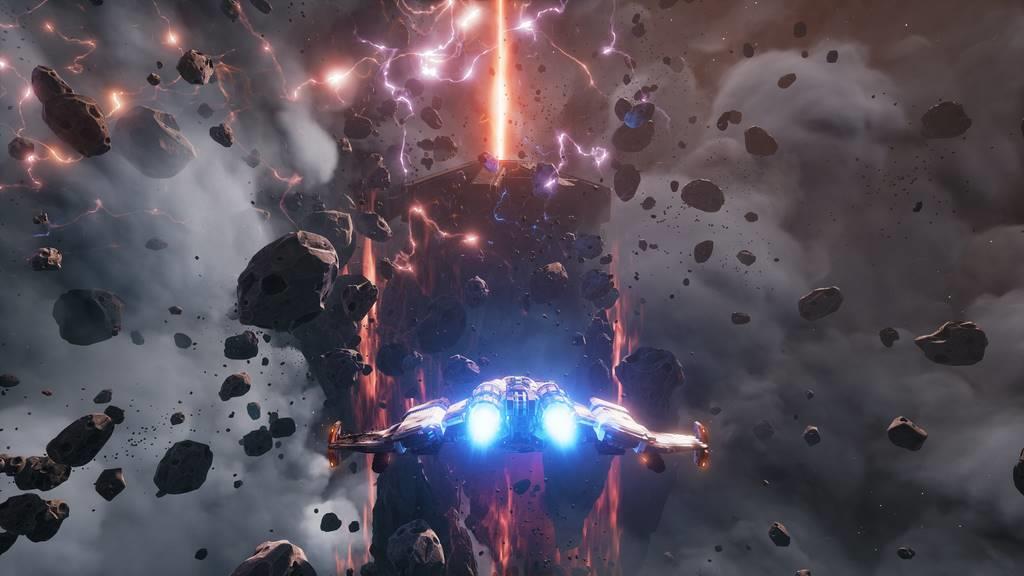 For those who want more of a challenge, a Hardcore Run option is present on the main menu.  While in the normal mode you can choose your difficulty at the start of each run (with Easy and Hard having their own pros and cons), a Hardcore Run is as tough as Hard difficulty, but there are some differences.  Once you die, you’re done.  In addition, all runs will start exactly the same with all blueprints and certain perks available, but no perks are upgraded.  Credits earned in a sector must be used between sectors to upgrade your ship, and again it’s use them or lose them.  As if that’s not difficult enough, before entering a new sector, you must choose a handicap for your ship that will be in effect for the remainder of that sector.  I’m not going to lie, I didn’t survive that long in a Hardcore Run.

When I first started out I was barely surviving through the first few areas (not counting the first major encounter in which you have almost no chance of survival).  Beyond my lack of skill at that point, a lot of my problems were with the controls.  I haven’t played a lot of dogfighting games in my time, but the ones I do remember playing the plane/ship/whatever would fly on its own and you just worried about maneuvering and rolling when need be and hitting the thrusters or the brakes to speed up or slow down.  With Everspace, the ship doesn’t move unless you make it move, and that includes buttons to move the ship forwards and backwards.  The default control scheme can thankfully be changed so if you’re finding the controls to be a tad strange, I highly recommend changing them to something more suitable for you.  Also, the convex nature of the Joy-Con analog sticks didn’t help me as my thumbs kept slipping off of them, but changing to either a Pro Controller or using a more flat or concave analog stick caps made a great deal of improvement. 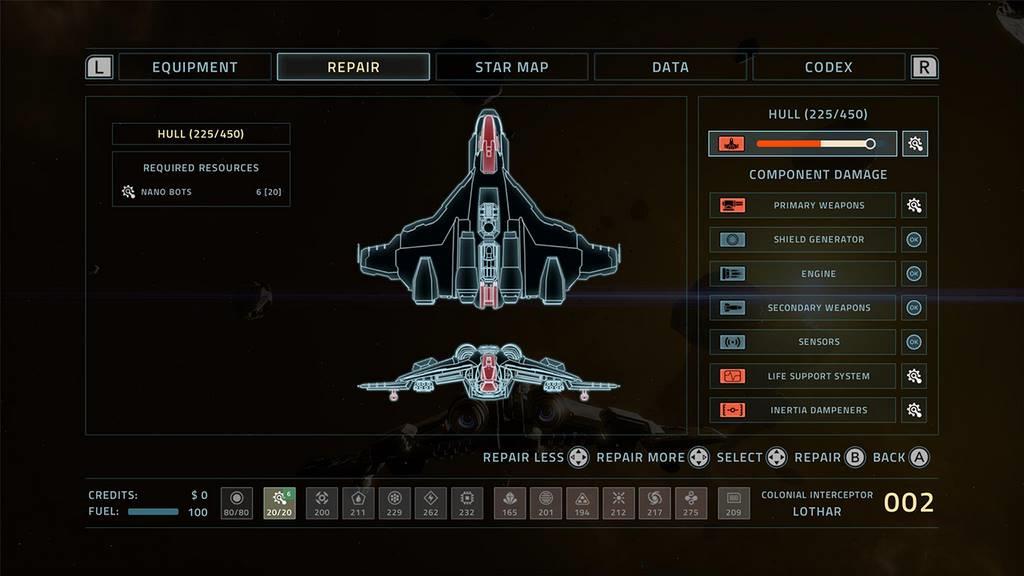 Overall, I enjoyed Everspace a lot more after playing it for a while than when I first started.  I knew going in that this would be similar to games like Vertical Drop Heroes where death was inevitable and the goal was to keep becoming more powerful until you eventually reached the end.  Adding dogfighting in space to the mix is actually a pretty good move, though that meant I knew I was going to struggle from the start.  Once I died a few times and then figured out I should change my controls, the game became a lot more enjoyable.  I like the fact that you have to have enough fuel to jump zones safely, but you’re not completely stuck if you don’t have enough and can’t find anymore fuel in your current area.  You can still try to jump, though you might not come out on the other side completely intact.  However, the $39.99 price point might be a bit steep for some people.  That being said though, if you like space shooters that involve a lot of replayability…and I do mean a lot…you should definitely enjoy Everspace.

Everspace took me a while to warm up to, but once I changed my control layout and started getting better at the dogfighting aspects, the game became a lot more fun.  Between finding resources to survive and picking my fights with nearby outlaws or running away so I could live to fight another sector, Everspace never really feels like the same run twice, and that’s definitely a good thing.