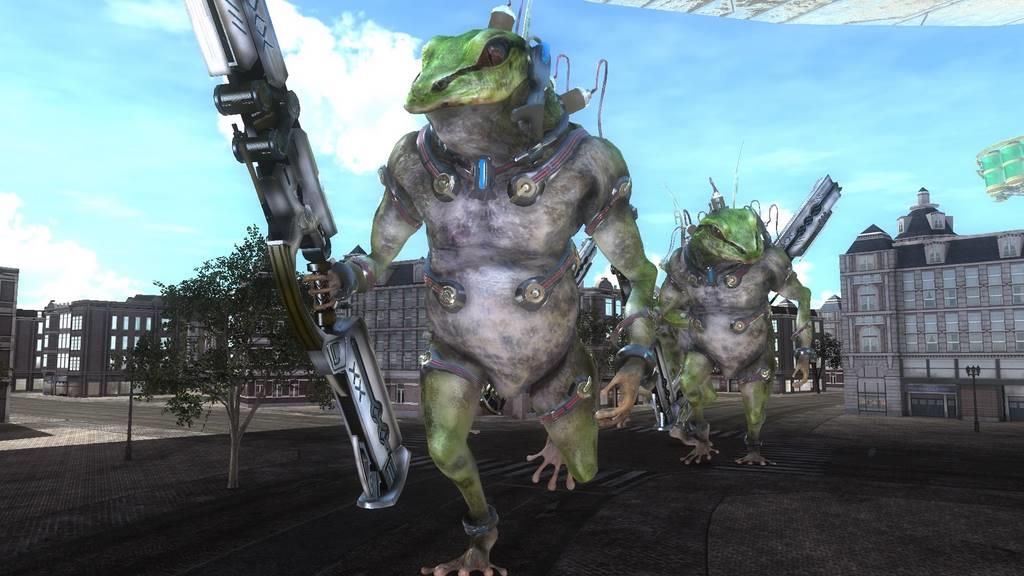 Make no mistake: the entire Earth Defense Force series of games are a little bit bad. From technical limitations that make them look and feel a console generation behind, to over the top camp in their voice acting and storylines, there is no attempt here to make a Game of the Year. So why do they keep churning out sequel after sequel?

Because bug hunts really are a heck of a lot of fun.

There are three modes in which to play Earth Defense Force 5: blasting through the 100+ offline missions, online with up to 4 player co-op, and split screen locally for two players. Whichever you choose, you're also left to align yourself as one of 4 unique classes:the all-around Ranger, the valkyrie-like Wing Divers, the Air Raider support class, or the exo-skeleton wielding tanks known as Fencers. Each approaches the battles in a different way and figuring out which classes and especially weapons work best for the later stages is vital to clearing the hardest levels.

But that's what this game really boils down to. No matter which mode, class, or play style you adopt, the crux of this game is mowing down wave after wave of giant insects, animals, and flying saucers. The alien invasion is on the core gameplay mechanic here is a straightforward clearing of each map from the horde of red dots that amass on your radar. Any other objectives are rarely presented cleanly; and any higher form of purpose than the simple pleasures of extermination are lost in the inane babbling of the various shallow plot devices employed - news flashes, HQ communiques, and NPC chatter of incessantly and annoyingly chirping on about the "monsters" every 10 seconds. There is no presence of a higher purpose either, and at times the game's campiness seems to stretch a tad too far, spewing nonsense to pass the time.

There are moments when the silliness comes across and delivers a chuckle with the gameplay humming along but other more persistent times make you just want to play the game on mute. I am not kidding in the slightest when I nominate EDF 5 for the worst voice acting and dialog in any game I've ever played. Period. I'd like to chalk it all up to some sort of lost in translation Japanese to English goofiness, but the repetitiveness of the dialog belittles any excuse. Even in native Japanese that repetition would surely still be maddening. There must be some inside joke that I'm not privy to about constantly referring to them as monsters when "bugs," or "aliens," or any of a number of alternative terms would no doubt be not only more accurate descriptors but finally deliver some respite from the constant chirping of "monsters this" and "monsters that" that nearly drove me batty. 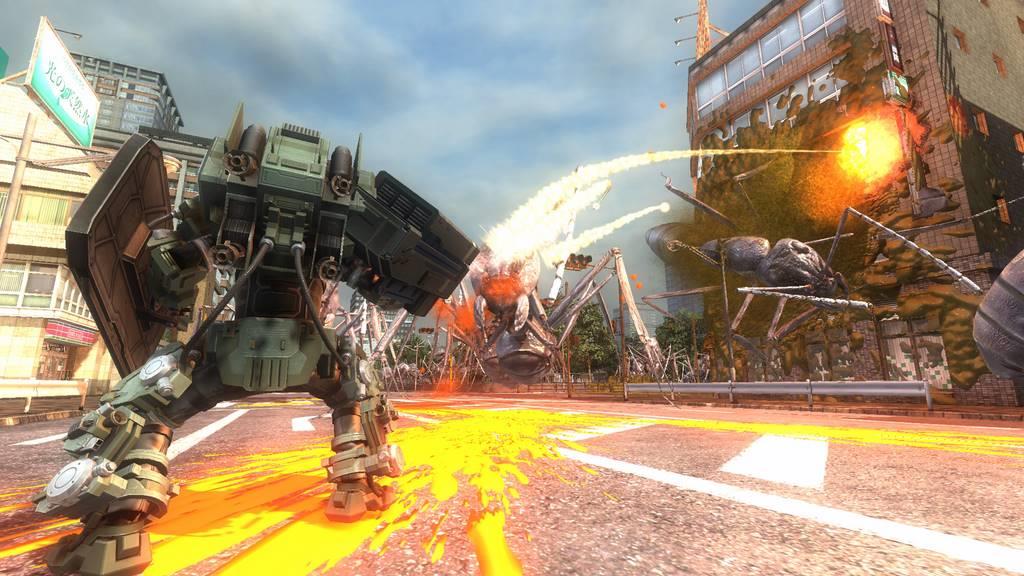 All that noise aside, those hordes of bugs are still an awful lot of fun to mow down. There really aren't a lot of games like this out there that dig in to the guilty pleasures of blowing off steam and don't try to be anything more. And guilty or not, they are pleasures. You go into each level with two weapons of your choosing, swap with R1, reload your unlimited ammo with the square button, fire away with R2, L1 to jump or dodge, left stick to move, right stick to point your weapon. That's it. No aim down sites, no complex button combos required; just face off against an angry mob of enemies and shoot anything that moves. Changing the difficulty level will ratchet up the penalties for friendly fire and make you much more susceptible to damage but ammo remains infinite and the gameplay unchanged. Until the final stages, the difficulty stage to stage and wave to wave rarely over exerts yourself. And many of those stages themselves seem a bit repetitive in locale and enemy faces, kinda dragging out the totals to that 100+ tally even when many just feel like checkpoints in a larger encounter. Measuring out when to maximize a clip and when to reload is usually the most thinking you need to do, aside from deciding which enemies need to be included with each clip of machine gun ammo vs which need a rocket square to the jaw.

There is nothing about EDF 5 that lets you in on the fact that you're playing on the latest greatest consoles. As a matter of fact the frame rates, flightiness of the controls, lack of depth in combat mechanics, even the menus all scream that this should be a game from the last generation. The EDF community will swear that's simply because there is so much happening on-screen with he massive number of enemy assets to render and track that to ramp up the specs would grind the gameplay and framerates down to unplayable levels. I'll buy that for now. I guess you can say it's a throwback, but where I start to struggle is when I compare it to EDF 4.1, which in 2017 was really just a rebranding of EDF 2025 from 2015. We're sitting here three years later and I can't really discern a difference between that predecessor and this sequel. And that ends up being the rub on this review. The modes, classes, graphics, weapon choices, vehicles, humor, everything in EDF 5 seems to have already debuted in EDF 4.1. So how can I ultimately recommend this latest version at a premium price to the predecessor when I can't actually make a compelling case to differentiate the two? Now EDF junkies will tell you there are improvements in 5, mostly in terms of fixing broken class-specific gameplay elements, adding much nicer menu navigations, and other minor improvements, but that's quality of life stuff, nothing that really pushes the needle. Is this really EDF 5 or 4.2? 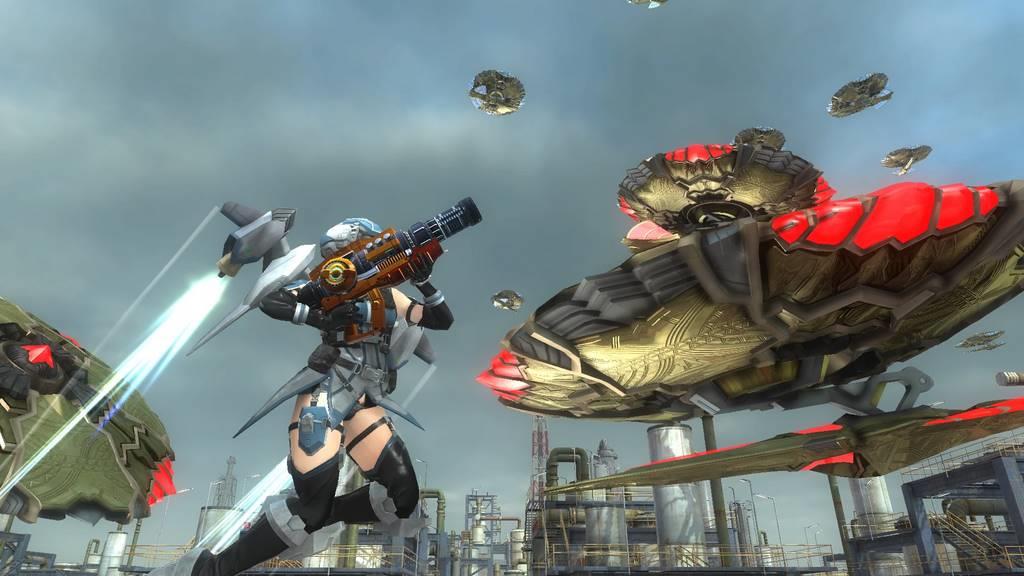 And there are yet bugs that remain, the hold left stick to sprint button is maddeningly fickle. The terrible enemy AI leads the occasional last man standing to get stuck somewhere in a far flung corner of the map, failing to properly navigate the terrain to engage in the battles. To clear the level every last foes has to be eliminated and now it's time to really engage that wonky sprint mechanic as I've got to find a way around, over, or under half of Japan to erase that last pip on the radar and finally get permission to move on. So even if some of those grievances from 4.1 are sorted out, 5 is by no means flawless.

So where does that leave us? I guess ultimately, if you're a die hard fan of this series then of course you will want to jump in to the latest edition of bug smashing action. If you're not, then it's a hard case to make to say you should pay 3x the price for a game that is little discernibly different than what came before. I would be tempted to score a little higher on gameplay and feedback loops alone, but seeing as I am having trouble really telling how EDF 5 stands out I would feel guilty scoring this one any higher than the 4.1 or the 2025 4.1 itself was based on. Those games pushed the boundaries and introduced real concepts to move the series forward. This just seems to be 4.1 with a new major version number. It feels like a chance to dip back in with a new game that feels a lot like the last one, so I'll score it just about where that one ended.

It's dated, it's camp, it's occasionally annoying, but it still has a core mechanic that very few are still trying to do, and Earth Defense Force 5 does do it well. Take on the waves of monsters and tear into them with every last weapon in your arsenal for a great bit of mindless fun. The story and your progress will crawl through the 100+ levels but the types of enemies and the difficulty will ramp up alongside you.

The highest compliment I can give is that this game is probably the closest I'll ever get to that Starship Troopers shooter I've always wanted to play but will probably never realize. If I squint my eyes just a little bit I can make believe I've left the EDF and joined the Mobile Infantry. Welcome to the Roughnecks. Would you like to know more?