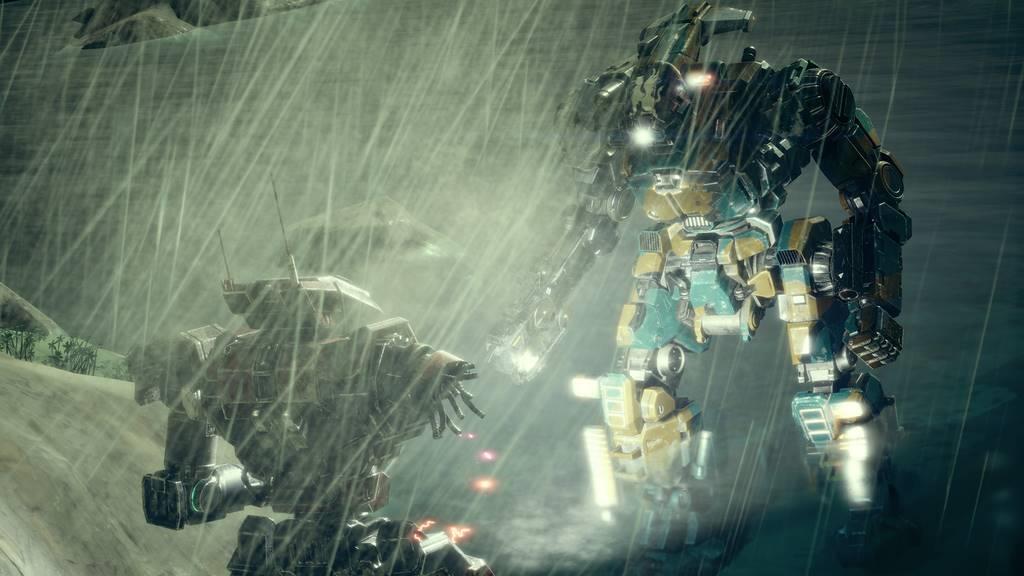 Flashpoint is a seemingly modest push in a few obvious directions for BattleTech. One being the introduction of three new mechs. The other being the introduction of flashpoints, back-to-back “high-stakes short stories,” as the ads have put it. And the third thing being jungle maps. Altogether, those three elements make up the gist of the Flashpoint expansion: new mechs, new maps, new missions.

The three new mechs start with the medium-tonnage Crab, an all-energy-weapons platform designed at the tail end of the Star League era (a long-gone golden age). The next is the heavy-tonnage Hatchetman, intended to be a guerrilla warfighter and close-range combatant, that, to the best of my knowledge, is the only mech to come equipped with a mech-sized axe in its hand. Then there’s the assault-tonnage Cyclops, the big brother of the three newbies, which is a little faster and a little bit more fragile than comparably sized mechs, but comes in two configurations poised for long-range combat in one, and medium-range combat in the other.

The Cyclops became an instant favorite for me, though I had to slow my roll and not take too much advantage of its swifter movement abilities. Too often I’d let it run ahead of the pack. The Cyclops is not meant to go toe-to-toe with enemy lances. I had to run it in zigzag patterns to keep it further out of harm’s way, and to allow its long-range weaponry do the heavy lifting.

I want to like the Hatchetman, but as a heavyweight in a game that is only throwing the heaviest--the assault mechs--at me, the awesome-looking Hatchetman is too squishy for me to take on most missions. It’s a soft target, the enemy knows it, and so the bad guys tend to focus fire on it. I’ve never felt safe running the Hatchetman up close to start swinging that axe. The one time I did have the courage, my Hatchetman went up for a melee attack and threw a kick instead, so I was unimpressed, though it did the same amount of melee damage with a kick as if it had swung the hatchet anyway. 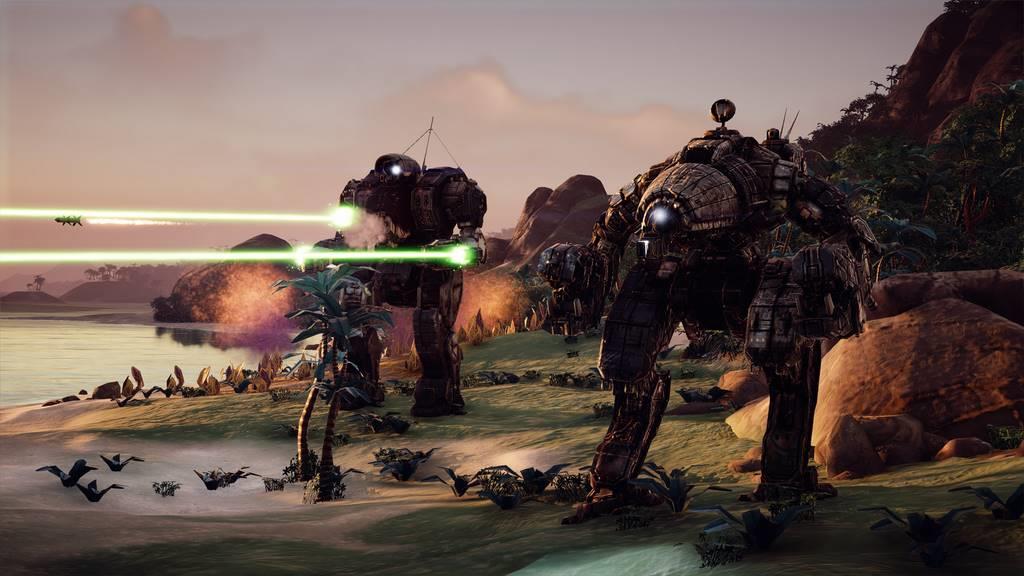 The Crab is a little guy that I’d like to try out. Unfortunately, there’s a weight-class problem again. Think bringing the heavyweight Hatchetman along to end game fights is dangerous for me? That problem is multiplied tenfold with the even-lower-weight Crab. It wouldn’t last two rounds in the fights I’m in.

The only way I can see bringing the Hatchetman and Crab along for any fights at all is if you rerolled a fresh character, starting from scratch in Update 1.3’s new Career Mode. Then working your way up through fights that start at lower weights. The enemies would scale up accordingly, and I can comprehend a world where I’d get a lot of use out of mediums and heavies again. But I’ve come too far with my mercenary outfit to do that now. I’m stuck in the assault weight class, and I’m having too much fun with the high-end stakes of these five-out-of-five-star difficulty fights to start over now.

The titular flashpoints are multistage short stories for your MechWarriors and senior staff to tackle. Developer Harebrained Schemes uses the term “short stories” in order to emphasize that you’ll be reading a little more text between the shooting and the explosions, which bridges the gameplay gap between the vanilla campaign and the play-forever merc contracts. 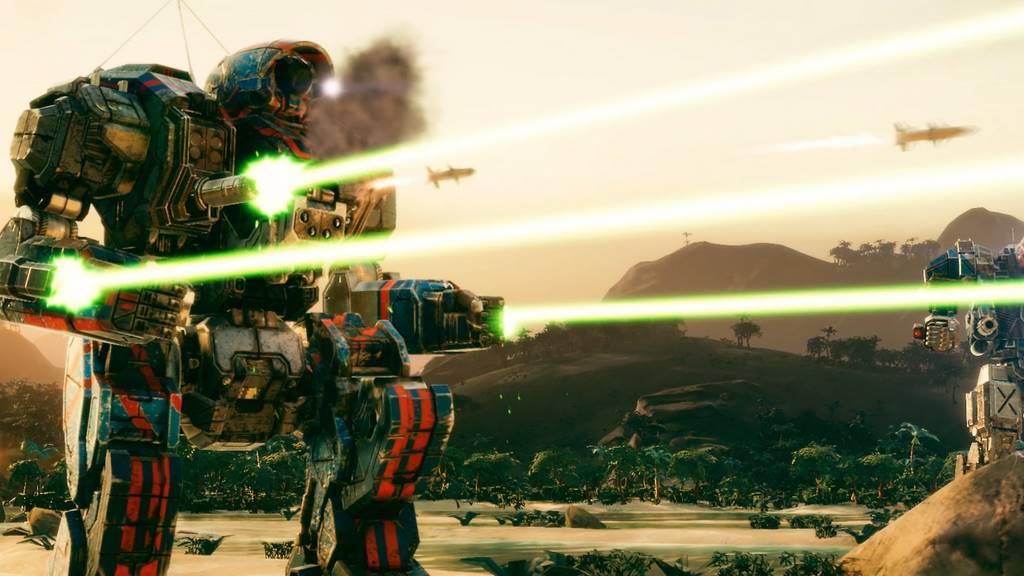 Flashpoint and vanilla BattleTech has to ignore some of its politicking in order to operate. Like when I allied with The Free Worlds League, which blacklisted me from taking any missions ever again from House Capellan, enemies of The Free Worlds League. Yet, when a flashpoint came up from House Capellan, my now-sworn enemies, House Capellan was more than happy to hire me on for the job. They hit me with a 20 percent markup on everything in the Capellan store, I couldn’t sign merc contracts with them, couldn’t even raise a signal with them on the comms. Yet the narrative in flashpoints supersedes the rest of the gameplay, and I was able to take on a flashpoint with my enemies.

Also, despite the large payouts and special salvage that comes along with completing flashpoints, the employers of these flashpoints aren’t going to pay your way across the galaxy to the flashpoint location. You gotta buy your own gas. But there is a generous expiration date on these flashpoints, giving you time to, one, planet hop your way there to take on side jobs to pay for the trip if you have to, and, two, giving you time to pull certain mechs out of storage to refit in the event that there are tonnage prerequisites or restrictions slapped onto the flashpoint. 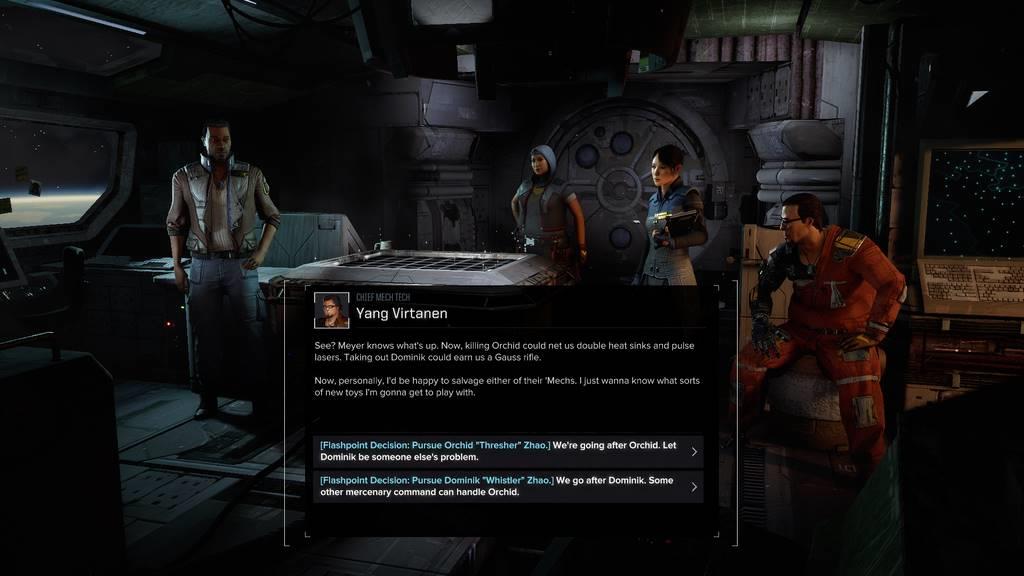 I like having tonnage restrictions. In vanilla BattleTech, once you reach the end game, there’s no reason to have any more or any less than eight full-blown assault mechs active. Anything more than that is simply wasting cash on upkeep costs for mechs you aren’t using, and wasting garage space for the same reason. Plus, once you’ve crossed the finish line to the end game, the mercenary contracts don’t get any easier. The enemy will always, always, always throw its biggest mechs at you, too. I don’t care how skillful you are with light and medium mechs; their speed and maneuverability will never win the day against the weight and sheer firepower of the heavies and assaults. Forget it. You can’t win. So, forcing a player to dust off those light and medium chassis is a great way to change up gameplay--using gameplay tools you’ve already got sitting right there.

A new biome comes into play. There are now jungle maps around the place. There always were “tropical” planets, but they weren’t all palm trees and sunny beaches until now. Which is odd. I like the inclusion of jungles, but they sure seem like they should’ve been in from the beginning. Having all that thick moisture in jungles actually aids your mechs’ heat sinking abilities to a modest degree. Combining that with a leisurely stroll at the water’s edge means you can bring some of your most heated offenders to the table and get away with a few more alpha strikes than you’re used to. Firing all weapons, over and over, has never looked more beautiful than through a jungle sunset. Jungle maps tend to be generous with water and tree cover, making for destructive matches.

I also appreciate seeing more glossary boxes pop up. I have only the thinnest grasp of BattleTech lore, and the vanilla campaign showed me a lot when it came to chivalric misdeeds and senatorial backstabbing. But Flashpoint is now trickling in societal mores and cultural doctrine. 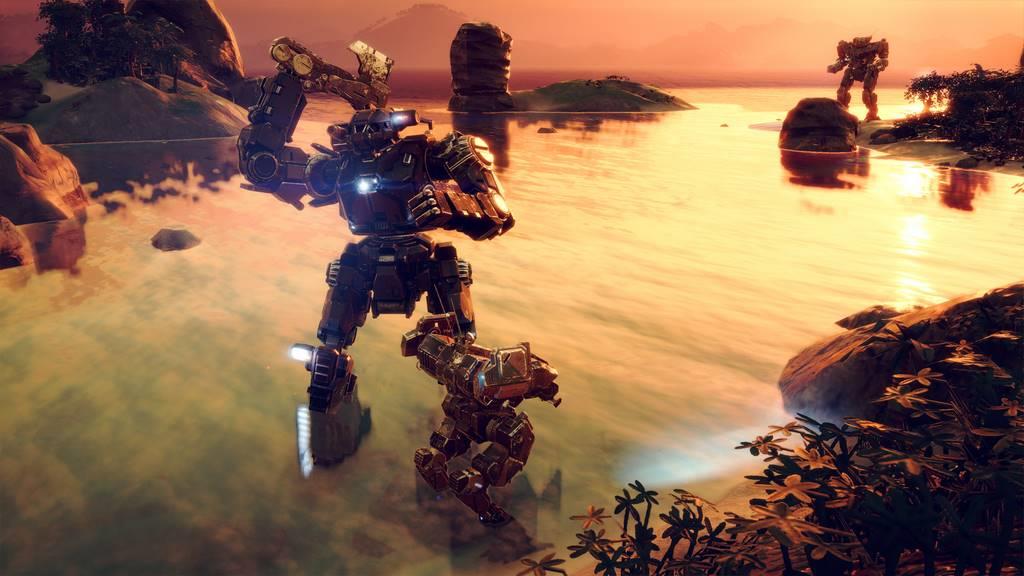 It’s good that these richly worded side quests were separate from the main storyline. I feel like they’re excellent content on their own. If I’d had to deal with them simultaneously with the political and battlefield strife of the main campaign, I might’ve been overwhelmed. Since the Flashpoint expansion is sold separately, it feels like a reasonable task to take on flashpoint side quests now, after the end game is said and done.

Yet the difficulty on these missions--at least your executive officer’s pre-briefing assessment of a mission’s difficulty--is even more hit-or-miss than before. Flashpoints set up some cool scenarios, and talk a big game, but don’t seem to be scaled to my mech company’s skill level. You sent three heavies and one assault mech against my four assaults? Those poor folks didn’t have a chance. Part two of the flashpoint was eight assault mechs plus support vehicles? I have no idea how I’m going to survive this. At the end of the day, I’ve got a job to do, and that job is to improvise, adapt, and overcome anything and everything I meet on the field of battle. Even if my XO misses the mark yet again. 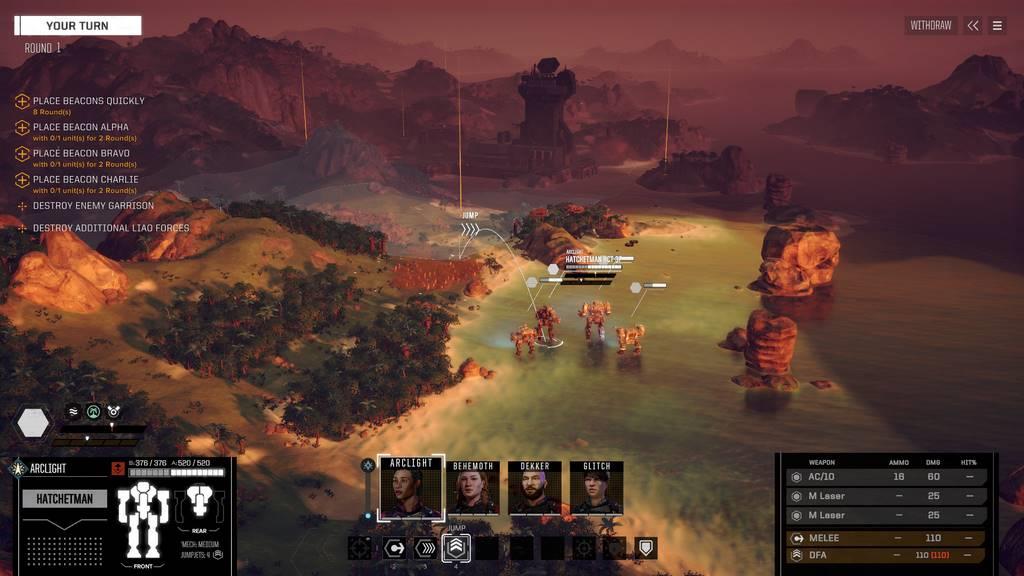 Not all is running smoothly for the new (and old) content. Only once did I run across a match that had vehicles driving under a lake. Although, in another match, a vehicle I was escorting stopped by a shallow river crossing and refused to budge for five or six rounds. It eventually got going again and caught up with the rest of its convoy. There’s a persistent problem of mechs visually disappearing if you swap their places around too much in bay 1, bay 2, and bay 3. It happens when flipping through different paint jobs, too. And it’s sometimes unresponsive when trying to pull a mech out of storage to get it fit for duty again. Also, I’m pretty sure I’ve owned fully assembled Black Knights and Awesomes at some point, and those have utterly disappeared from my storage facility, so who knows. Whoops, it just glitched out again, as I’m writing this review. The game just took my fully equipped Kintaro in mech bay 3 and reduced it to 1/3 of a Kintaro now shoved into storage for some reason. Sigh. There’s still some ironing to do, it seems, though I can’t tell if this is a persistent problem across all of BattleTech that I’m only just now noticing, or if Flashpoint introduced these issues.

I can’t help but love this game. My favorite game of the year, in fact. That tells you how good the overall package is, despite the spills in the aisles that need cleanup. I have faith that Harebrained Schemes is on the job and are working towards getting everything up and running as intended.

As a singular purchase, Flashpoint appears rather modest on the surface. But taken as a whole, it would be impossible for me to go back to a pre-Flashpoint campaign.