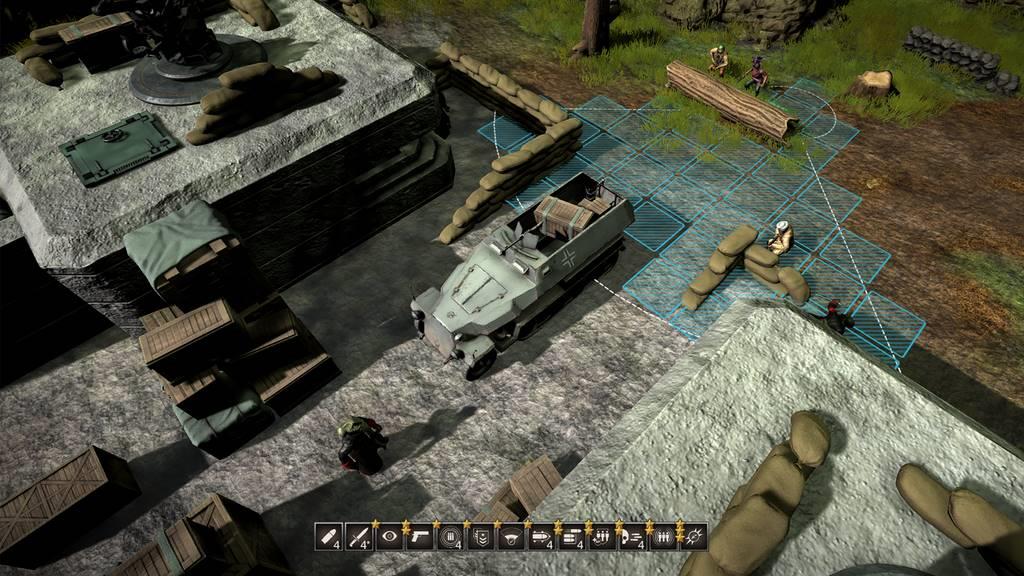 Written by Sean Colleli on 1/8/2019 for PS4
More On: Achtung! Cthulhu Tactics

WWII tactical turn based games are a bedrock staple of the genre. It’s where a lot of the earliest modern battle tactics were first tested and naturally they evolved through pen and paper RPGs and into the turn based strategy titles of the 90s and early 2000s. Achtung! Cthulhu Tactics is a pretty straightforward take on the idea except this time it’s mixed with a healthy dose of eldritch horror by way of H.P. Lovecraft; the game itself is an extension of publisher Modiphus’s Achtung! Cthulhu tabletop system. It’s a pretty odd marriage to be fair but in many ways it just works, because developer Auroch Digital doesn’t mess around too much with the tried and true turn based RPG formula.

The story has a surprising amount of military jargon and it feels like the developers were at least paying attention to what was going on during the twilight of WWII. As the story goes, mere days after the D-Day landing at Omaha Beach, a detachment of allied soldiers goes missing in an area of Germany known only as the forests of fear. The U.S. military sends Corporal Arkhee Singh of the paranormal Majestic division and his partner Ariane Dubois of the French Resistance into the forest to regroup with the missing soldiers and determine what the Nazi occult detachment is up to. I appreciated that Auroch did their homework both on the WWII details and also incorporated some of the characters from the pen and paper mythos; no doubt this faithfulness to the source material will make longtime fans of Achtung! Cthulhu feel at home.

Once Singh and Dubois meet up with the lost allied platoon, the gameplay starts to take shape. The level environments, while mostly linear, are free-roaming and allow your team to hunt for clues and collectibles at will. Once you encounter enemies, however, combat takes the form of a semi-traditional turn based system. Each team—allies and axis—have a number of “action points” that you can spend each turn, but your squad can also gain “momentum points.” Momentum accumulates every time you score a critical hit or kill an enemy, and it can be used to fire off special moves, revive downed allies, or even enter an XCOM-style overwatch mode. Momentum can even be used once your action points are expended. Combat arenas have a variety of cover scattered about and the game lets you know which cover is most effective, which is compromised and where the best firing lines are relative to enemy positions. 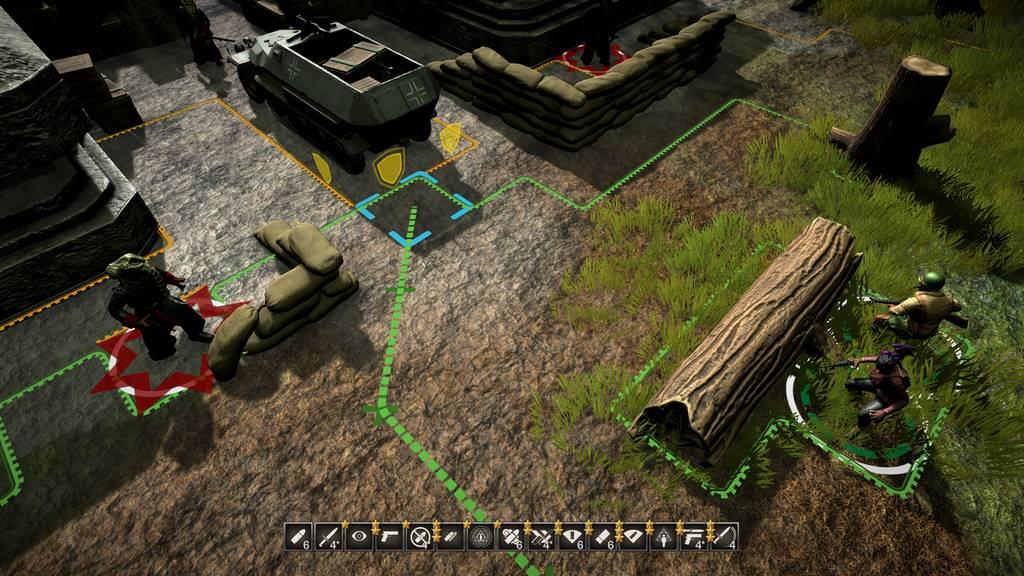 Each character has a vision cone that denotes where they can see and fire, so each turn is about spending your action points wisely to position your troops just right to engage the Nazis, and then exploiting any accumulated momentum points to gain the upper hand. The vision cones are also dependent on the weapons each character has equipped; Dubois’ signature Luger is good for mid-ranged precision shots, but put a shotgun in her hands and she’s more useful for close-range clearing. The twist is that these vision cones do double duty for clearing out the pervasive fog of war that envelops each area. I was also surprised to see that the fog comes rolling right back in when you pick up and push onward, allowing enemies to flank you and take cover in your blind spots.

Fog of war is a typical component of strategy games so it’s not unique to the whole Lovecraft theme that Achtung! Cthulhu Tactics is going for. That said, each character has a multilayered stat system that takes luck, stress and sanity into account. Each character has HP of course— if it runs out they drop dead, naturally. However they also have a luck stat, which makes the enemy more likely to miss and when a Nazi does land a hit, HP damage will be reduced. Luck doesn’t last forever, though, and I enjoyed the idea that it wasn’t just a concrete stat buff; each allied character’s luck can run out, which means they’ll start taking huge damage penalties but even worse, their stress stat will take a bigger hit.

Yes, Achtung! Cthulhu Tactics has a shellshock stat. If a character loses a lot of HP and stays low too long, or if they see an ally take damage or die, their sanity takes a huge hit. If a character sustains too much battle stress they’ll fall to pieces; they’re far less likely to take commands, they will behave erratically, they might lose action points, and can even fire on allies in a frenzy of madness. 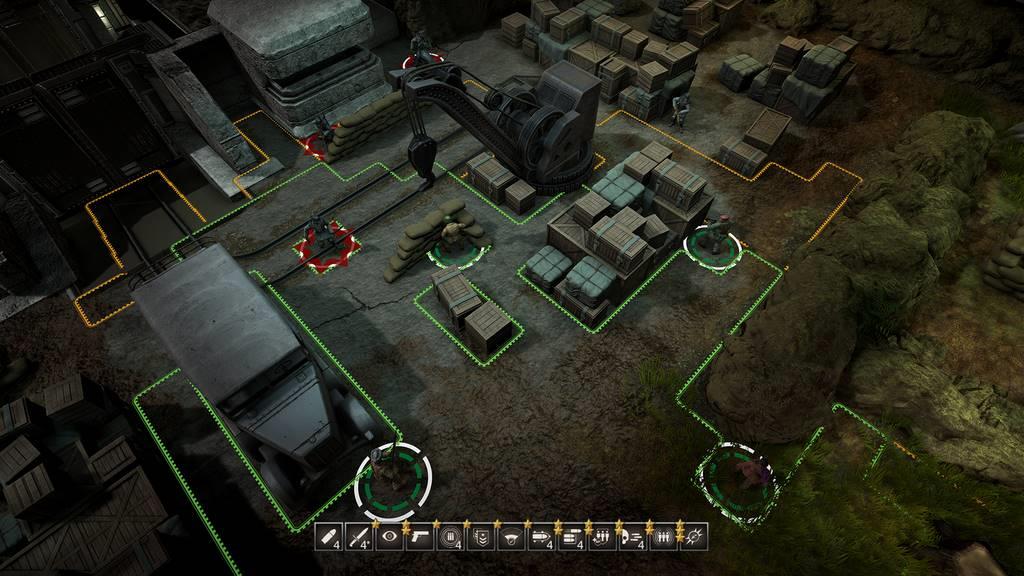 If you play smart—balancing your commands among all of your troops, placing them in good tactical positions, assigning the best troops and weapons for the job—you can stave off madness pretty easily, even when Hitler starts throwing the real eldritch abominations at you. The whole Achtung! Cthulhu conceit is that the Nazi occult fixation was more than just pseudoscientific nonsense and actually involved an alliance between the Third Reich and the Old Ones. This means that all manner of snarling, betentacled monstrosities start showing up in the Nazi ranks, from brainwashed rank-and-file troops to Lovecraft’s trademark Shoggoths, which add even more battle stress to your weary soldiers if they get too close. This keeps the combat interesting as you adjust your tactics to deal with the more esoteric among Cthulhu’s stable of nightmares.

The game has a robust skill tree and collection of upgrades to match the Nazi-occult forces, and you acquire a great deal of your bonus XP and supplementary goodies by grinding out side missions. You’ll want to tackle these as soon as they pop up because they’ll go away after a while if you just press on with the main story, and you might find yourself pretty outmatched later on if you don’t do some sidequests. My main annoyance with these is that a lot of the level layouts and geography are recycled over and over; you will keep seeing the same areas, sometimes a couple levels in a row, and I’m not sure why because the map design is not that intricate. These aren’t Deus Ex or Witcher 3 hub worlds and I don’t expect them to be; they’re straightforward, fairly linear grid-based corridors and battle arenas littered with cover. 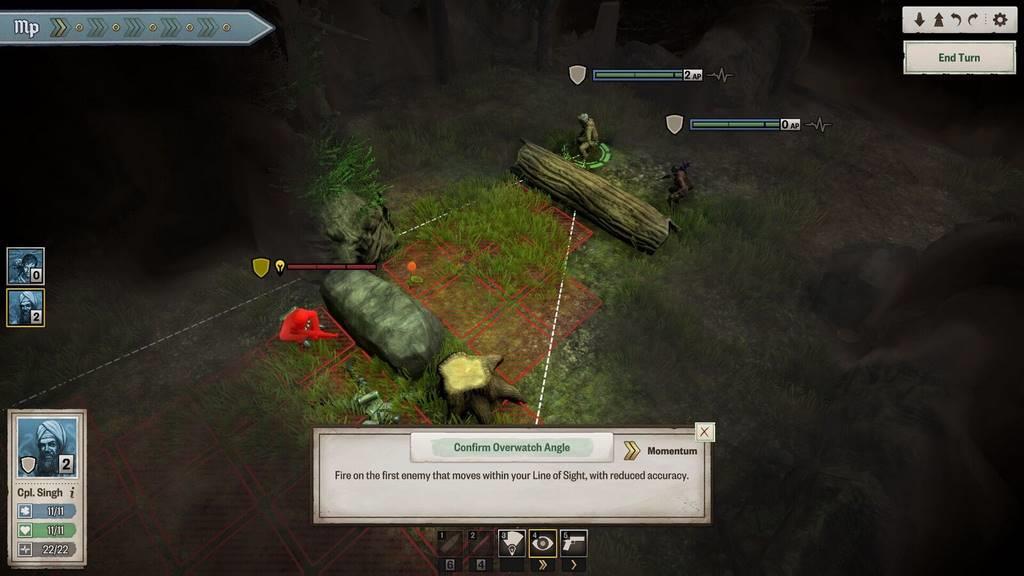 I’m not knocking the level designers as the maps do their job well and provide tactical situations and some light exploration, I’m just not sure why they didn’t fire up the map editor and crank out a few more levels. Maybe they ran out of time, but considering this game is directly inspired by a pen-and-paper RPG where the DM has the power to sketch out all sorts of diabolical killboxes and mazes some more variety would have been nice.

That’s the biggest issue with Achtung! Cthulhu Tactics: lack of variety. There aren’t enough specialized upgrades to ferret out, or enough cool collectibles. You don’t add any other soldiers to your squad so your overall skillset stays rather static, even after you build out the skill trees. Environments repeat too often, and once you get the hang of action points and using the “momentum” skill to extend your effectiveness, there isn’t a lot of deep strategy either. To be fair, Achtung! Cthulhu Tactics is extremely accessible and incorporates a good deal of background setting from the RPG that inspired it. It’s simple to play on a PS4 controller and as long as you don’t make any really stupid blunders, it’s easy to grind through the main campaign and side missions in about 10 hours. That said, Achtung! Cthulhu Tactics is a game that would really benefit from some substantial DLC or at least a map editor, because as it stands the game is a touch too straightforward and linear for its own good.

Achtung! Cthulhu Tactics is an accessible turn-based strategy title on the PS4, but it lacks the polish, depth and variety needed to have real staying power.