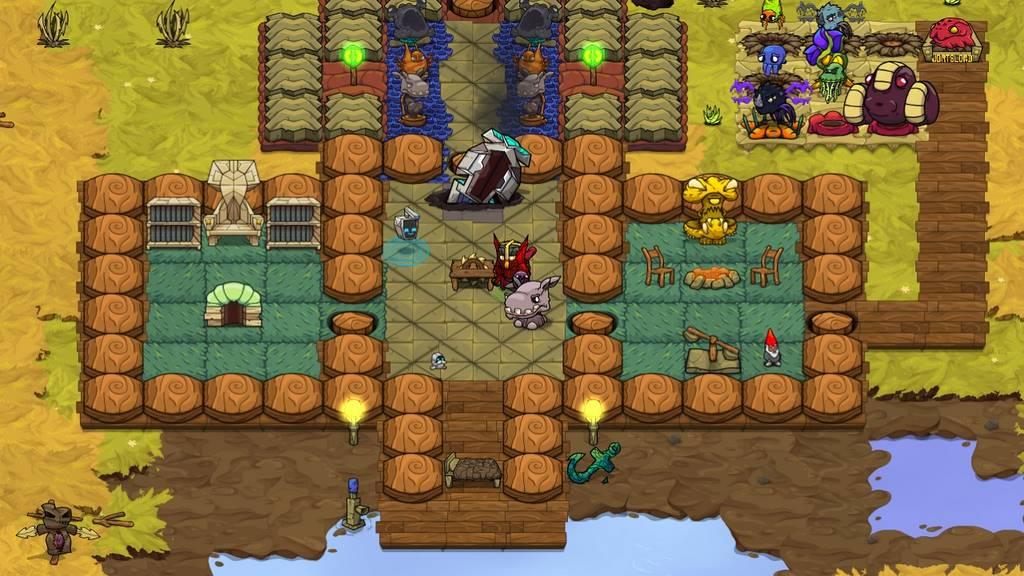 There’s a running joke in the PC gaming subreddit: the four horsemen of the gaming apocalypse are the Steam content tags “Early Access, Survival, Open World, and Crafting.” Joking aside there is an awful lot of these kinds of games, many of dubious quality. But to be fair to Crashlands, a game that debuted on mobile platforms, graduated to Steam and has now arrived on Switch, it only fills three of those four categories. Crashlands is indeed an open world, crafting and survival game, but its focus is more on fun, relaxation and humor than on the kind of bare-knuckle, inches-from-death survivalism that made The Long Dark and Don’t Starve infamous. Crashlands is also a lot better made than crowdfunding disasters like StarForge. But now that Crashlands is on Switch, does it deserve a spot in your eShop library? Well, that really depends on how much you like this kind of game, and just how much you can enjoy, or tolerate, Crashlands’ sense of humor.

See, Crashlands was developed by indie studio Butterscotch Shenanigans, and that’s the kind of achingly nonsensical studio name that already arouses mild annoyance in the back of my mind. In Crashlands, you play as Flux Dabes, a delivery woman who wears a pink luchador spacesuit that makes her look like one of those tiny M.U.S.C.L.E. figurines from the late 80s. She and her trusty robot sidekick Juicebox are flying in their space delivery truck when they are attacked by an alien named Hewgodooko. Flux and Juicebox quickly grab their deliveries and leap into an escape pod, soon after crashing on planet Woanope. Once there Flux and Juicebox must gather resources, craft weapons and items, and even tame local wildlife as they struggle to build a transmitter to phone home. They must apparently also crack wise in the most irritatingly self-referential fashion the entire time.

I’ll try to get this out of the way first, because it’s probably the most subjective element of my review. If Crashlands’ sense of humor doesn’t click with you like, immediately, you’re probably going to have a hard time enjoying the game. If names like Juicebox and Woanope weren’t clear enough, the best way I can describe it is as follows. Crashlands is that painfully ingratiating guy you knew in college who was constantly trying to win people over by being as goofy and faux-clever as possible. His self-referential humor always felt forced, though, and honestly just made you cringe. That’s Crashlands’ humor in a nutshell. Flux and Juicebox have a running commentary about everything, every-damn-thing, with this smug absurdity that the writers clearly thought was much cleverer than it really is. Pick up a new crafting material? Smarmy joke. Construct some new armor? Goofball nonsense word salad. 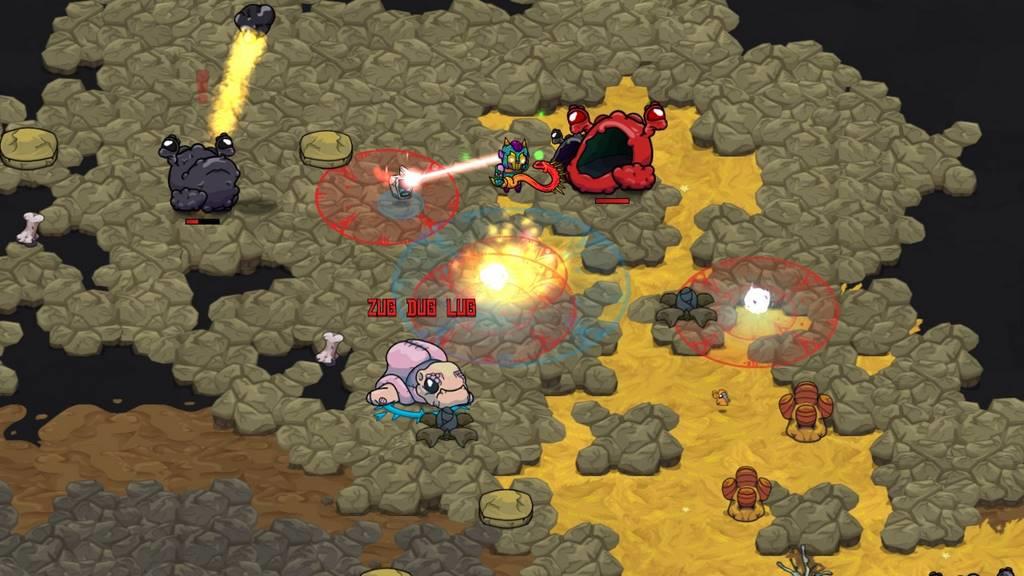 It’s exactly the kind of thing that obnoxious college guy would do, the kind of guy who would randomly scream something like…well, “butterscotch shenanigans!” and then expect everyone to laugh. We all knew that guy at one point, and hey, if you thought he was hilarious, more power to you, because I have no right to tell you what you find funny is wrong. But if he just got on your nerves, then Crashlands will most definitely get on your nerves too. Which is unfortunate, because under all the trying-too-hard jokes is a streamlined and surprisingly chill survival crafting game.

Crashlands’ mobile roots shine through, but that’s not really a bad thing. Many crafting games get bogged down in the details and busywork. For instance, No Man’s Sky promises a universe of infinite possibilities, but buries it under a mountain of tedious grind. Don’t Starve conversely is a master class in the survival genre, but the whole point is that death is constantly at your heels. Crashlands dispenses with both the tedium and the starvation, and a lot of the unnecessary fiddly details that plague the genre overall. Instead of making you sift through endless inventory menus, Crashlands streamlines item use. If you have an axe in your inventory, you’ll automatically use that when chopping down a tree. When you attack a monster, you’ll use your spiked club instead. Crashlands usually picks the best tool for the job. Pretty soon you fall into the game’s basic loop of gathering, receiving a mission or crafting blueprint, building better equipment, and repeat.

It’s nothing revolutionary but if you like the steady, incremental improvements of the crafting genre then you’ll feel right at home. There are also a number of quality-of-life improvements over other survival games that I appreciated. You can warp back to your escape pod at any time, so you’re never too far away from a crucial crafting table or resource farm, and as you explore you activate fast-travel points. 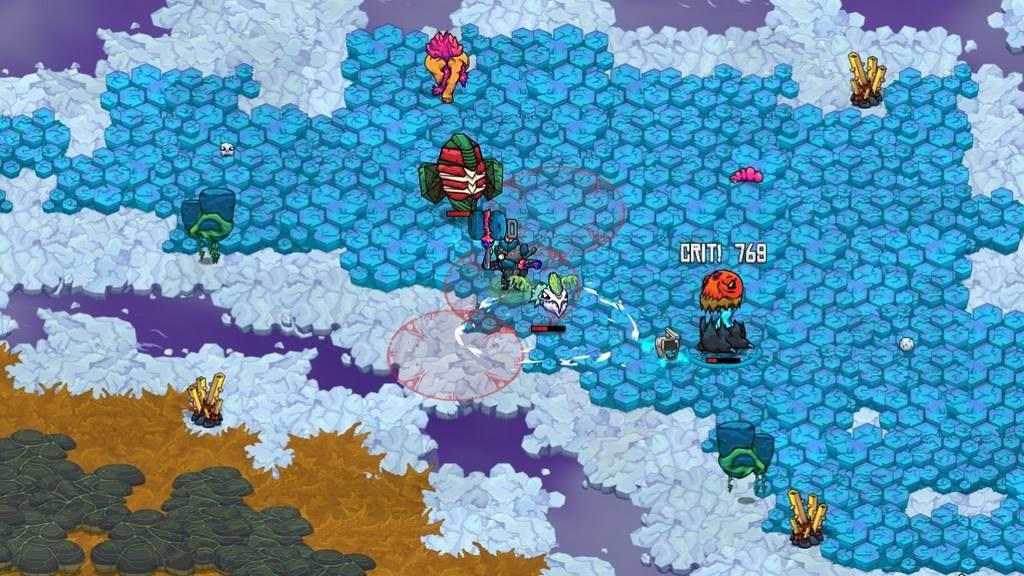 If you have a friend with the same sensibilities, on Switch you can tackle the game with instant drop-in co-op. Basically player 2 takes over as Juicebox, who can attack enemies and heal Dabes’ injuries, with a modest cool-down of course. This has the effect of making a laid-back, fairly easy game even easier, as you rarely have to scrounge for healing items, but the whole point seems to be to relax, have a good time, and explore the scenery. I certainly died several times while attacking hostile animals, especially early on, but as long as I retraced my steps back to where I died I instantly retrieved all my dropped loot.

Crashlands’ production values mirror its absurd premise and writing. To be honest it looks a lot like a 2008-era flash game, with vivid, bouncily-animated sprites that look like paper cutouts. The art style is strikingly reminiscent of Edmund McMillen’s signature style in Super Meat Boy and The Binding of Isaac, to the point that at first I thought he guest art-directed on Crashlands. The style is so close as to be uncanny, although it’s highly ironic that a chill game like Crashlands looks so much like the difficulty meatgrinders developed by McMillen.

Outside of the art style and humor, I honestly found it difficult to find anything truly engaging about Crashlands. This might be my own issues; it’s hard for me to find a crafting game that hits that sweet spot. I haven’t put a lot of time into one since Minecraft and The Long Dark; the former for the sheer creativity it allowed, the latter because it let me live out that barely-hanging-on Bear Grylls survival thrill ride.

Crashlands is something rather different. It’s a game that takes that crafting, resource-gathering loop and turns it into something almost self-indulgent. Without urgency or creativity, I found that loop a bit lacking, but someone else might find it positively Zen, especially if they enjoy zany, off-the-wall humor. In any case, Crashlands works well as a mobile title. It’s best in short bursts when you have time to kill, or when you’re unwinding before bed. For me it’s a touch dull and repetitive, and the humor gets old fast. But for someone who enjoys this sort of thing, well…Crashlands is just the sort of thing they would enjoy.

Crashlands smooths the desperate edge off of open world survival crafting, and turns it into a laid-back experience that works best in short, pick-up-and-play sessions. That said I personally found the game’s persistent random humor to be pretty irritating.