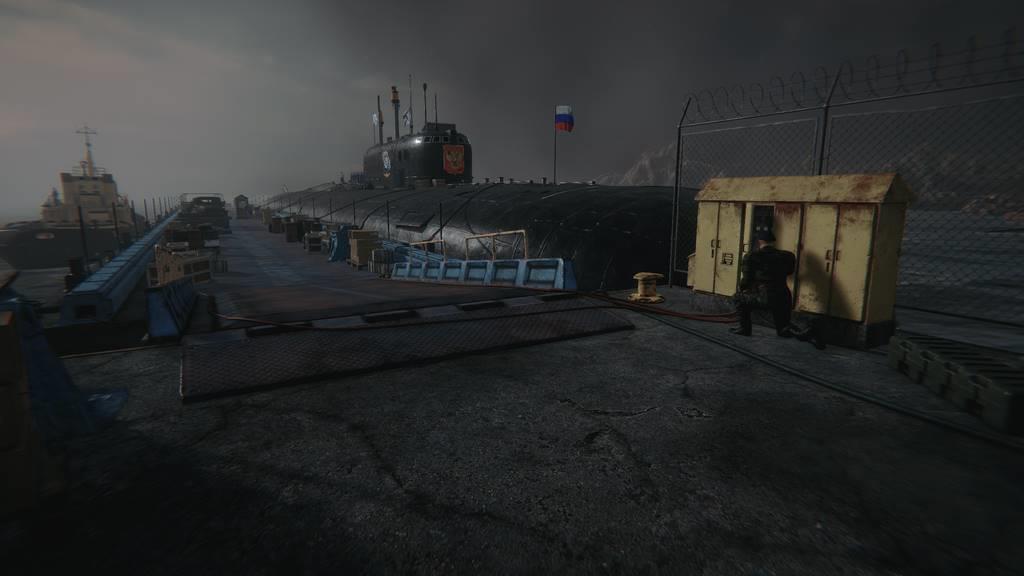 Kursk, if you don’t remember it sinking with the loss of all hands in August of 2000, was the pride of Soviet Russia’s naval fleet. Kursk was the second largest submarine in the world, second only to the Russian Typhoon class. Unfortunately, Russia had pretty much lost the Cold War by that time and didn’t have the funds to maintain the navy in the ways needed, nor did it always have enough to even meet payroll. This was also around the time that Russia got a new, young, and energetic president Vladamir Putin wanted to show the world that his Russia was not bereft of military power, and did so by calling for a mammoth exercise in the Barents Sea.

It did not end well, especially for the Kursk.

KURSK (the game) is based on that tragedy. In the words of the folks that built it, “KURSK is the first ever adventure and documentary video game inspired by real events. You assume the role of a spy who finds way on the Russian nuclear submarine K-141 Kursk. Your task is to collect secret information about the revolutionary Shkval supercavitating torpedoes.”

I had high hopes for this one. I’ve always been interested in submarines; if there’s a submarine movie, I’ve seen it. Das Boot, Hunt for Red October, U-571, and many more. This game would be right up my alley - I couldn’t wait to get hold of it and get busy playing.

Once I did, I couldn’t wait to be done with it.

It started out well enough. I was sent as a spy to get onboard the Kursk to get a look at the technology as a whole, but in particular to learn what I could about the new Shkval supercavitating torpedo, which was a real global game-changer because of its incredible speed of more than 200 knots. As a player, this led me to believe that there would be the extra tension of getting caught spying long before being killed in the sinking. My avatar, of course, had no fore knowledge of the sinking. It sounded like it was going to be a real adventure, albeit with a known ending.

It was not. What it ended up being was 2 ½ hours of frustration and boredom.

Before we get to that, though, I do want to say that the submarine itself was quite interesting. I doubt that it was an authentic reproduction of the actual boat, but I also think that it probably wasn’t too far off. It was certainly believable. Unfortunately, an excellent stage is no compensation for a bad play. I enjoyed the first few minutes, but then the drudgery began. In essence, KURSK is a 10 minute game surrounded by two-plus hours of what equates to filler. I would have much preferred playing the role of Captain, or at least someone of enough rank to see the bigger picture of what was going on.

The frustration starts almost immediately with one of the clunkiest and inefficient “interaction” systems I have ever encountered. I spent more time gyrating around in front of people, doors, and objects trying to find the spot that would activate the Interact command than just about anything else, except going through hatches. It helped a little that everything that could be interacted with had a white dot hovering on it, but the constant fiddling with finding just the right spot to make it worked negated any positive feelings about it.

Then there were those hatches. If you have ever toured an old submarine (or warship), you will know that they are made up of watertight compartments sealed with heavy steel hatches. This is to prevent the entire ship flooding if there is a hull breach in one or more of the compartments. In KURSK, hatches are used to trigger the loading of the next compartment you are going into. There is a load time for the animation, and there is the load time of the next compartment. Even running off of a fast SSD drive, each of these transitions took 5-8 seconds. I can't even imagine the patience required to play it from a slower drive.

That doesn’t really sound like that big of a burden, though, does it? It will. This is where the boredom comes in. For the majority of the two hours before the explosions happen, you do nothing but run errands for other ship mates. Ninety percent of those chores require going through 5 or 6 hatches, in addition to going up and down half a dozen stairs or ladders. It is extremely repetitive and offers absolutely no entertainment value. This is not to say that there was no attempt at providing interesting things to do, but they all fall flat. Probably the worst “fun” thing to do was being forced to ride an exercise bike no less than five times to beat the times set by other people on the boat. This was really nothing more that rapidly alternating A and D key presses for a couple of minutes. By the time the big guy in the gym finally let me go, I was convinced that it was my patience being tested, not my speed or stamina. 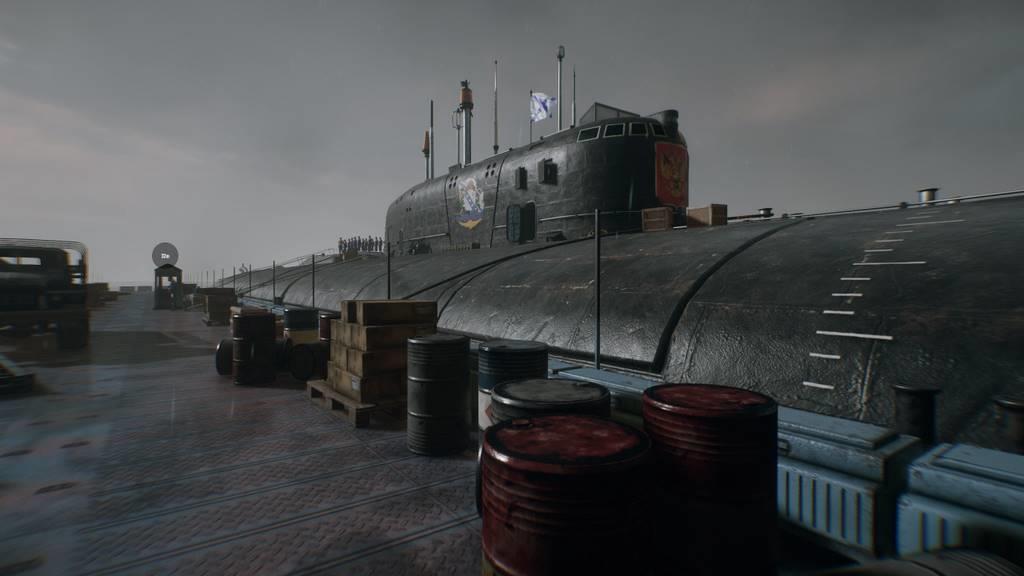 Sadly, that is an example of one of the more interesting things! Almost everything that came along that looked like an opportunity to provide an enjoyable puzzle-like solution ended up being nothing more than pressing one key and watching the problem solve itself in a canned animation. Going to break a safe? Click E and stand there watching. Going to hack a computer? Same. There was some light lock picking, but it was trivially easy.

I apparently wasn’t the only one to feel that the whole thing was one big bore; the boat felt deserted and lifeless because I was the only person that moved. The sparse number of crew mates was comprised entirely of people leaning against walls, or just standing around holding a broom. There was one poor guy that spent his last three days on earth trying to replace a bad fuse. Every single time I went by (and it was a lot!), he was standing there looking puzzled. The ambiance of the submarine itself was in no way sufficient to provide the feeling of tense activity by itself, or even the sense of crowding that is a constant hallmark of submarine life. The NPCs utter disregard for what was going on around them made it much easier to be a spy, of course, but so did the fact that the spying activities were as stultifyingly scripted as everything else. 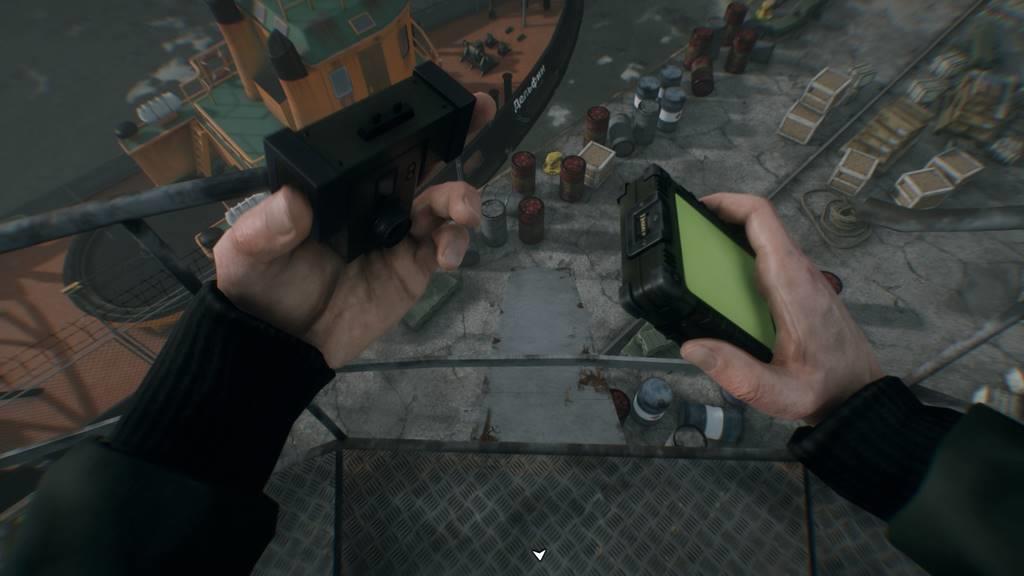 I soon found myself becoming nauseous, although not for the reasons you might suspect at this point. The queasy feeling comes down to the hatches again, although not exclusively. The problem was the first-person view of the opening of each hatch. First-person view with a lot of head turning that I can’t control is the very recipe for me losing my borscht. There were other animations that contributed too, but the hatches were both the worst, and the most common.

Right now KURSK feels like a missed opportunity. I celebrate the idea of bringing history alive, but that is not what happened here. Any understanding of what people were thinking about Putin, the state of the neglected military, the angst over not getting paid, the feeling that Russia needed to prove itself on a global political scale - those were there, but only in the form of context-less mutterings from NPCs. There was nothing that made me feel it. All I wanted to do was get through the next set of ladders, steps, and hatches so I would be one step closer to the end. Well, that and keep my most recent meal where it belongs.

In case you’re wondering, the end was not worth the effort to get to it. It’s easy to think that there wouldn’t be any way to make the player feel any meaningful stress since the way the game ends is known well in advance of the playing, but I can’t help remembering the first time I saw Apollo 13: I already knew how it ended, but that didn’t stop me from stressing my way through their descent through the no-comms period at the end.

The difference was in the way the story was told.