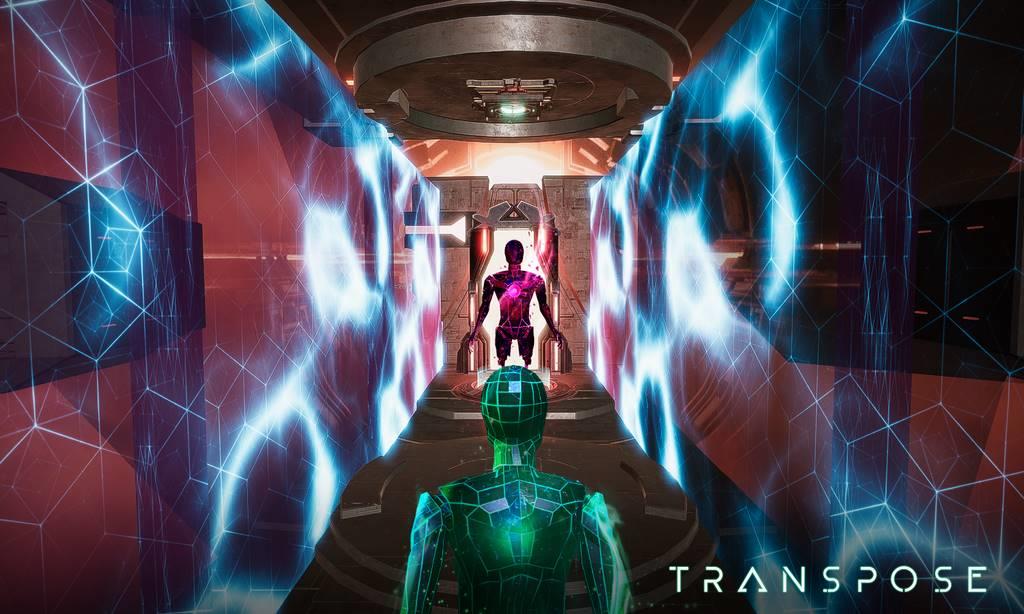 Transpose is defined as a verb that means causing two or more things to change places with each other. It is also an extremely apt name for a VR puzzle game that has you doing exactly that, which may sound somewhat less challenging than you would expect from a puzzle game, but it is anything but easy. In fact, it is not only quite challenging, it is also very innovative. Transpose is part platformer, part puzzle, and all intriguing as can be. In addition to making things move around such that they are positioned to get you from point A to point B to solve the puzzle, you are challenged to do it by what amounts to building macros.

I remember the fun we had with keyboard macros back in the day - it was great fun to sneak into someone’s office at program a macro on one of the keys, and it was even more fun to make the string the would be inserted into the text when the chosen key was pressed as abusive as could be. That kind of thing wouldn’t be tolerated now, which is probably a good thing, but there’s definitely a feeling of nostalgia for those older, simpler days. 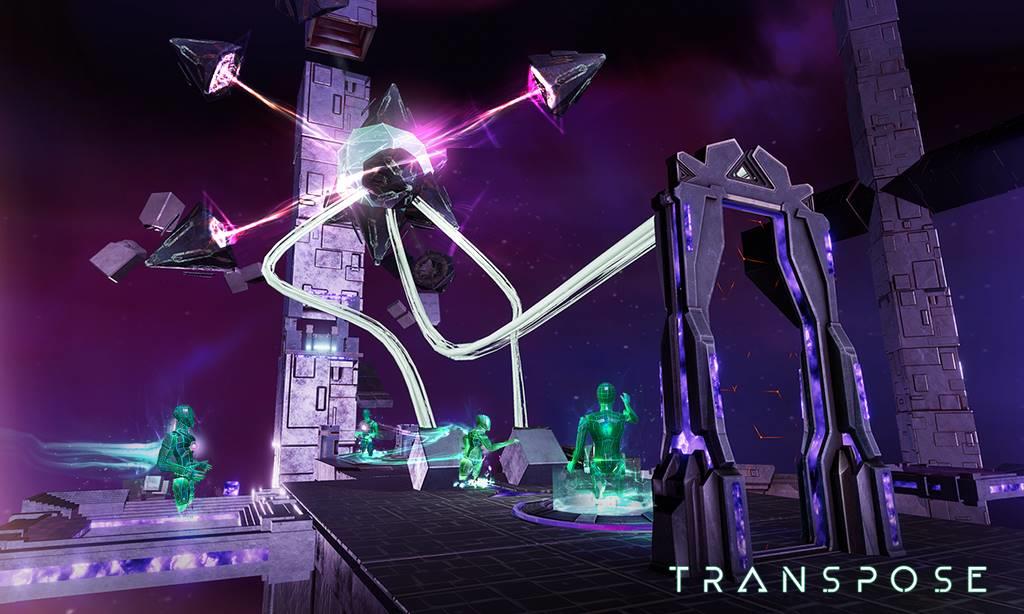 For those unaware, macros are essentially recordings of things you don’t want to do manually over and over and over. Consider a column of words that you want to put a comma after on each of hundreds of lines of text. You could waste time adding a comma at the end of each line one at a time, or you could build a macro to do it. It’s pretty easy to do because you “train” the macro simply by performing the action once while the macro recorder is running. Once recorded, you can play it back as often as necessary. Additionally, macros can be saved, which allows for easy reuse when needed.

In a nutshell, Transpose is about moving platforms and “echoes” around in a huge room with the goal of placing an energy cube (presumably - there’s no storyline whatsoever, so they could just be decorative cubes for all we know) into the proper receptacles. Again, it sounds easy, but it is not.

So where do macros/echoes come in? It’s all about the timing. Normally, it is generally considered to be impossible to be in two places at the same time, but being able to do so is the very crux of the puzzles. For example, you may need to be on the other side of a great gap, but the control that moves the platform that would get you to the other side is inconveniently located… on the other side. Fortunately, you can start an echo and train it to work its way over to the other side and activate the control that moves the platform over to where you are. The trip will likely require teleportation, but you can’t carry the cube with you as you teleport. The solution is to teleport the echo-in-training over to the other side and have it activate the control that will send the travel platform over to the starting point. Once you have trained and saved the echo, you can save it to run automatically while you create a new echo that waits for the platform to come over at the command of the first echo and use it to carry the cube back across to the goal. 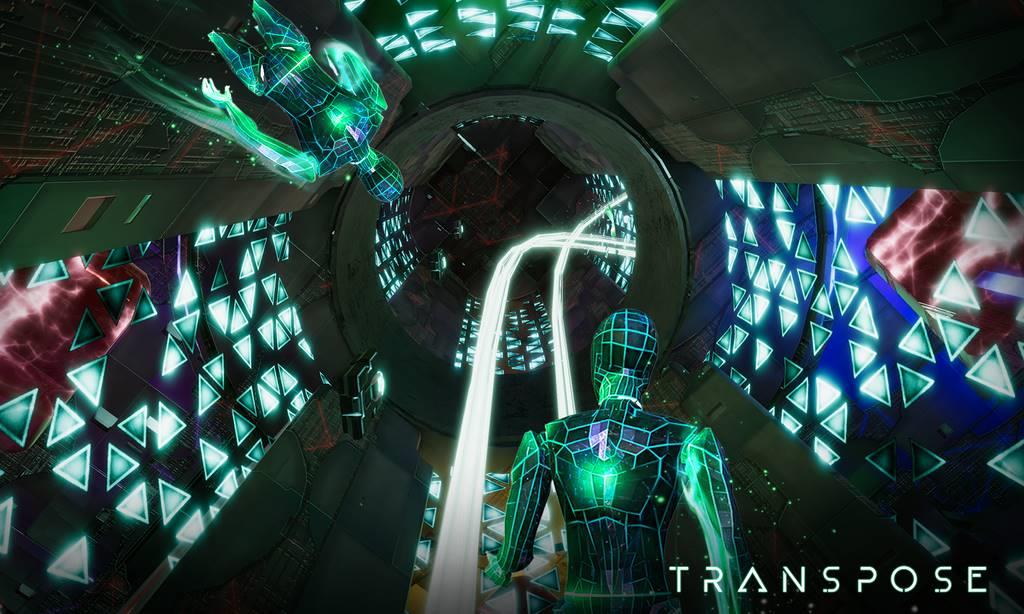 Complicated, right? Why yes, yes it is.

The first handful of puzzles are fairly easy to solve, probably because they are intended as a tutorial. Even as such, they can take awhile to figure out, even with the helpful hints provided by a mysterious pre-echo that acts as a kind of guide. It’s not that the controls are not intuitive, it’s more the case that our intuitions aren’t much help in a world like none we’ve experienced before. Personally, I struggled with a number of concepts. Teleportation gave me fits, but not because of the teleportation itself. The difficulty for me came down to trying to understand whether to keep or discard an echo I had already created. For the most part the need to keep versus dispose an echo was pretty straightforward, but I kept ending up with a bunch of useless do-nothing echoes when it came time to teleport. I still struggle with it, which has a lot to do with my inability to finish all of the puzzles.

I also suffered some minor motion sickness in Transpose, something that rarely happens. The designers did all of the right things with mobility and the ability to narrow the FOV, but certain parts of the scenery gave me problems. On one of the earlier levels, I had to stand between two barriers that had elements running from the top to the bottom - those movements in my peripheral vision were too much. It’s something to be aware of if you do typically get a little woozy in VR. 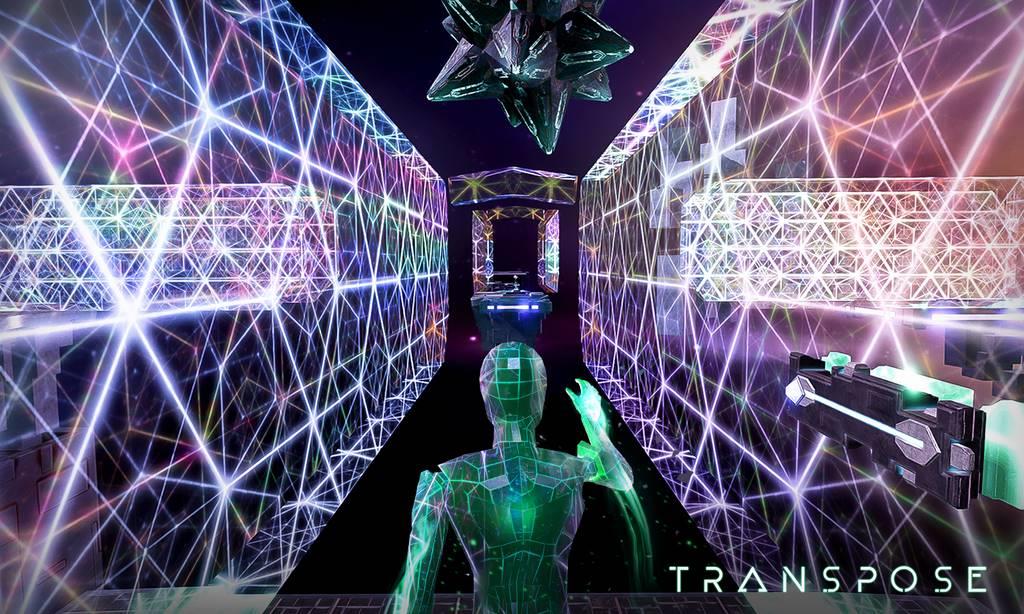 As the puzzles get progressively more difficult, it becomes more important to manage your resources, which is another way of saying that you only have a finite number of echoes that can be active concurrently. It becomes apparent that you will have to get as much as possible out of each echo, but it also becomes tricky to keep them in synch. The more you train an echo to do, the trickier it is to make sure everything happens on the desired schedule. I lost count of how many times I had missed an essential step or didn’t leave my (future) self enough time to get a task done before a platform moved away or some other miscue broke my progress. You have the ability to discard an echo and try again, but I generally had to rebuild the entire process from scratch. It’s no accident that there is a level reset button right there in the menu.

As previously mentioned, there’s no real narrative going on while you work through the puzzles, no explanation as to how you got there or why, nothing but background music. I didn’t miss it. Nor are there timed puzzles - you can take as long as you need to figure out what needs to be done. This is a wonderful thing! There’s enough to think through already without the artificial strain of trying to figure it out on someone else’s schedule. That said, it might have been interesting to know where those hours went, given that they felt like just a few minutes as time passed very rapidly in the game.

Speaking of time passing rapidly… there comes a time when you are creating echoes that can take  lot of time to finish. Meanwhile, you may be standing there attempting to create another echo that is dependent on the previous one getting caught up to where you are with your new echo. This delay can be exacerbated if you had to stop and spend some time noodling out your next move with that previous echo because the recording process doesn’t cut out the time spent scratching your head wondering what to do next. Fortunately, you have the ability to speed up time in a kind of global fast forward model. 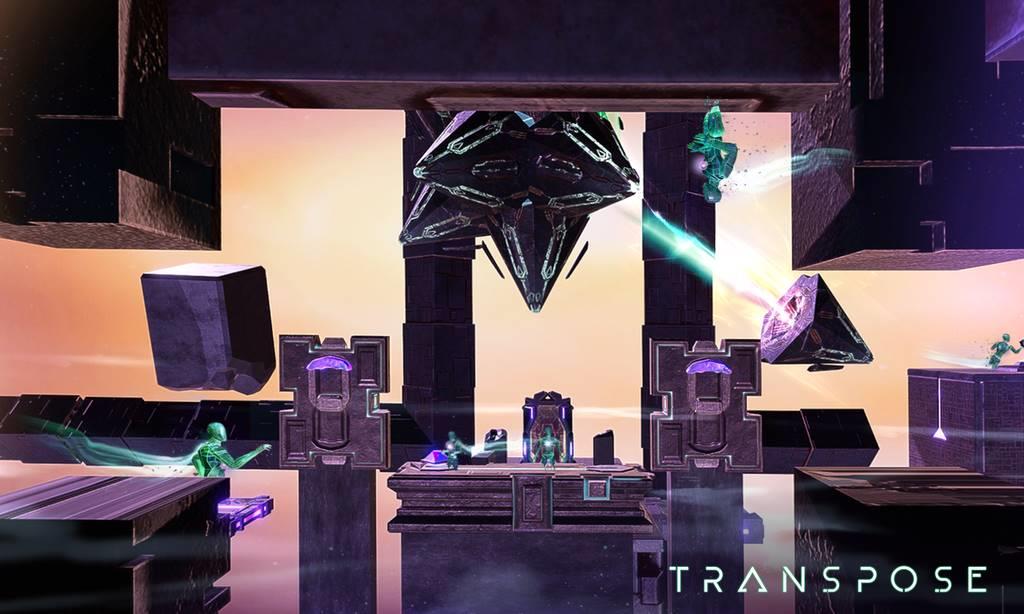 Transpose treads new ground in the world of VR puzzlers, breaking away from the tried and true room escape types of puzzles that are such an obvious fit for VR. Until my puzzle-solving skills eventually peaked , I found the progression in difficulty to be manageable without being too easy, but make no mistake: it does get hard. Some of the puzzles are dependent on a throwing action, which is something that is typically hard to implement well in VR, and there were a few moments of frustration when I had to start over because of a bad throw. More frustrating was the pool of useless echoes I would build up when trying to teleport to another part of a puzzle, only to find myself in the same spot but with yet another husk of an  obsolete echo standing there next to me. I also struggled with the Save vs. Discard choice. This was yet another way for me to get it wrong and have to start over. To be fair, though, those problems were more likely to be due to my aging brain struggling with the new concepts introduced by the game than any kind of inherent flaw in the game’s design. Besides, if it was easy, it wouldn’t be a puzzle.

Transpose treads new ground in the world of VR puzzlers, breaking away from the tried and true room escape types of puzzles that are such an obvious fit for VR. The solutions to the puzzles are dependent on the player performing and recording actions to create "echoes," then combining those echoes into a full solution. It makes good use of VR, although there are aspects of it that can cause problems for people that suffer motion sickness when playing in VR.