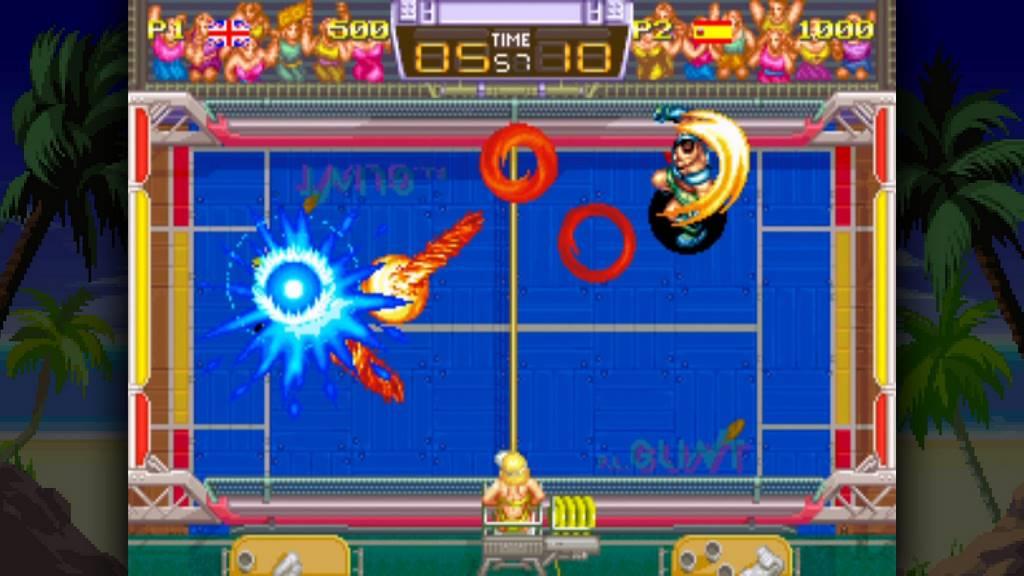 As someone who collects various gaming systems, I have a few systems that some people, especially younger gamers, may not know much about such as the 3D0 and the Philips CD-i.  Unfortunately, one system that I don’t own and wish I did is the Neo Geo CD.  I have played one a few times and was fortunate enough to play Windjammers a couple of times.  The past decade has seen the game come to the Japanese Wii Virtual Console in 2010 and the PlayStation 4 and PS Vita last summer.  Now though we have the game on a Nintendo system for the first time in the United States, so let’s go ahead and take a look at Windjammers on the Nintendo Switch.

For those who haven’t had the chance to play the game before, Windjammers is kind of like air hockey with a frisbee.  Two players throw a disc back and forth across the court trying to score in their opponent’s goal.  Each goal has yellow and pink scoring zones that change depending on the court you’re playing in.  A goal in a yellow zone will net you three points while getting the disc in a pink zone will give you five.  If you block a shot (more on that in a moment) and fail to catch the disc when it comes back down, it’ll count as a “miss” and your opponent will score two points.  The first person to twelve points wins the round.  Each match is best two out of three rounds and each round has a time limit of ninety-nine seconds.  If time runs out, the person with the most points wins the round with a tie giving both players one win.  If after a tie both players have two wins each, a sudden death round will begin with whoever scores first winning the match regardless of whether they scored in a yellow or pink zone.

While on offense with the disc you can throw it and try to score or lob it in the air to try and catch your opponent off guard.  When throwing the disc you can use the analog stick to determine which direction you’ll throw it in, throwing it straight or banking it off the walls to try to confuse your opponent.  Moving the analog stick in a half-circle from left to right will throw a curved shot depending on your character.  When your opponent is throwing the disc you have a couple of options.  You can do a quick dash if you don’t think you can run to where the disc is going in time, and you can also block the throw as opposed to outright catching it.  Blocking a throw will send the disc up in the air and if you can move yourself on top of the cursor that appears quickly enough, flames will surround your character and you can now perform a more powerful shot that has a better chance of getting by your opponent. 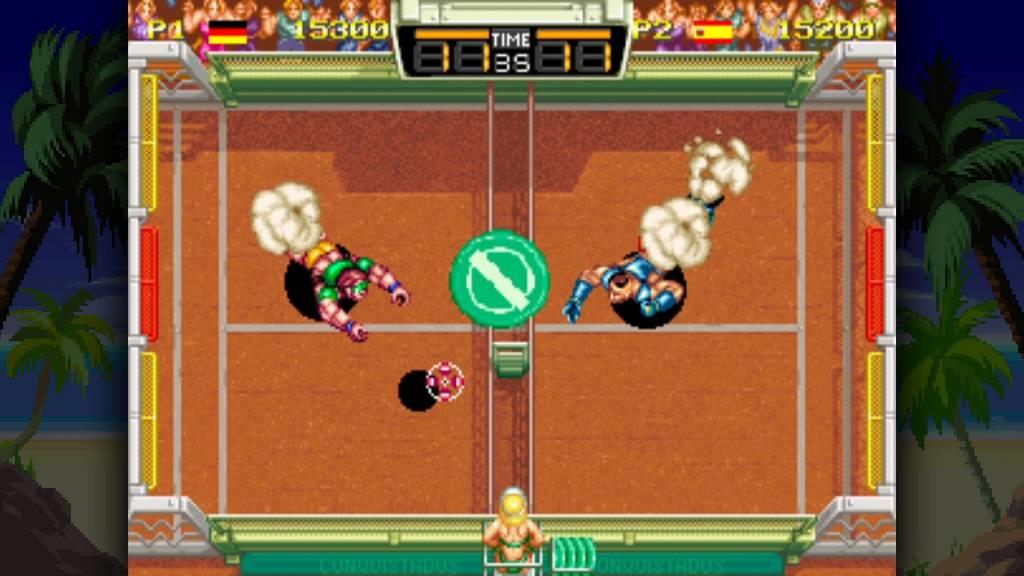 When starting the game you can choose from six characters, each with their own power shots and stats.  Two characters have great speed and can move around the court pretty quickly, but their power suffers.  On the flipside, two characters are pretty good power, but don’t move too fast and may have to rely on sliding around pretty accurately in order to prevent the opponent from scoring.  The final two characters are pretty balanced with a good mix of speed and power.  They all seem to control fairly well so choosing between them pretty much all comes down to your playstyle.  Personally, I began with a balanced character and moved more towards power, mostly because it’s pretty easy to mis-slide when going after the disc and combining that with a more speedy character made for a lot of overshooting the disc.

Windjammers has a couple of different game modes to check out, both single player and multiplayer.  In single player you have your standard Arcade Mode where you pick your character and then take on each character in a random order (even your own in a mirror match).  The opponents get tougher and more strategic as the game progresses regardless of which order you play them in.  Aside from the standard Arcade Mode there’s also an Infinite option as well which is basically just playing against the opponents over and over.  Both options let you choose your difficulty and if you’re new to the game, I’d suggest starting on Easy.  While you can view a “tutorial” on how to play, it just shows you the controls and doesn’t let you actually try them for yourself.  Going through Arcade Mode on Easy difficulty gives you plenty of time in the first couple of matches to get the hang of the mechanics before the difficulty starts to go up a bit in the later matches.  There are also a couple of mini-games you can play which basically serve no purpose other than to score points and to give you a break from regular matches (you’ll also play these in Arcade Mode after a couple of matches). 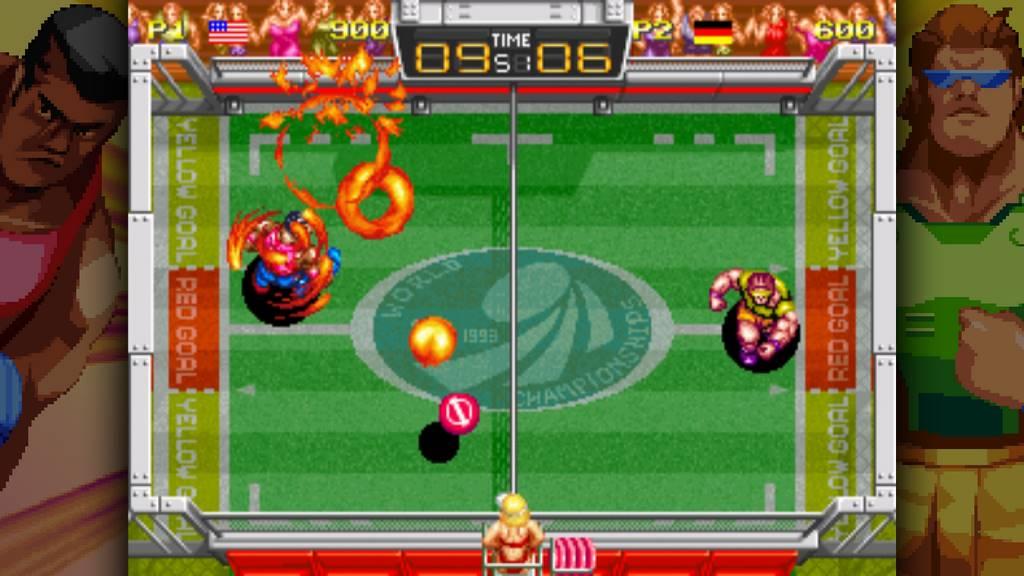 On the multiplayer side of things are local, wireless, and online play.  Online play lets you choose Quick Match for a simple match against a random person, a Ranked Match for more competitive play, and Custom Match where you and a friend can play online together.  Two players can also play locally on the same Switch or each using their own.  Aside from the normal Arcade Mode, local multiplayer, and online multiplayer, you can also practice the two mini-games you’ll play during the course of Arcade Mode.  Dig Distance simply has you throwing a frisbee and then controlling a dog running along the beach in an attempt to catch said frisbee when it comes back down.  Flying Disc Bowling is essentially bowling but using a disc instead of a bowling ball.  However, you only have forty seconds to score as much as you can.  If you can mange to keep hitting strikes you can probably make it through all ten frames in that amount of time, but I have yet to accomplish that to see what happens afterwards.

Overall I don’t really have a lot of criticism for Windjammers on the Switch outside of a couple of minor things.  The first are the controls, but the problem here is something with a lot of games and really isn’t the game’s fault: the Joy-cons.  When using the Joy-cons I was finding it rather difficult to pull off curved shots now and then.  I did finally manage to adapt but it took some time.  When using a pro-controller however, I was pulling off curve shots left and right with little problem.  The other minor issue I have is that there really isn’t much to the game.  For single player, Arcade Mode is pretty much it.  Granted the difficulty can ramp up quite a bit even on Easy difficulty, but once you’ve overcome the challenges of the standard mode, Infinite Mode is essentially the same thing, just never-ending.  However, if you have friends who enjoy the game, that’s where a lot of the fun is.  I mean, sure you can keep trashing the computer over and over, but it’s always more fun to take down your friends.

In the end, Windjammers was a fun game on the Neo Geo CD and it’s still a fun game today.  I didn’t get much of a chance to play with the online functionality as I had trouble finding opponents in matchmaking.  If that changes down the lines I’ll comment with an update, but a lot of the fun with the game is playing with your friends.  The game controls pretty much as well now as it did then, but if you have a pro controller I’d recommend using that as opposed to the Joy-cons, especially if you plan to play locally with a friend on the same Switch.  If you’re interested in a unique sport that involves throwing a frisbee into a goal, Windjammers might just be your…well…jam.

Windjammers was a lot of fun on Neo Geo and it’s still fun now on the Nintendo Switch.  While I had some minor problems at first using the Joy-cons to make precise curve shots, it’s not to hard to adapt and soon you’ll be throwing the disc every which way on demand.  Once you’ve mastered the controls and have gone through Arcade Mode over and over again, grab some friends and have them join in on the fun.