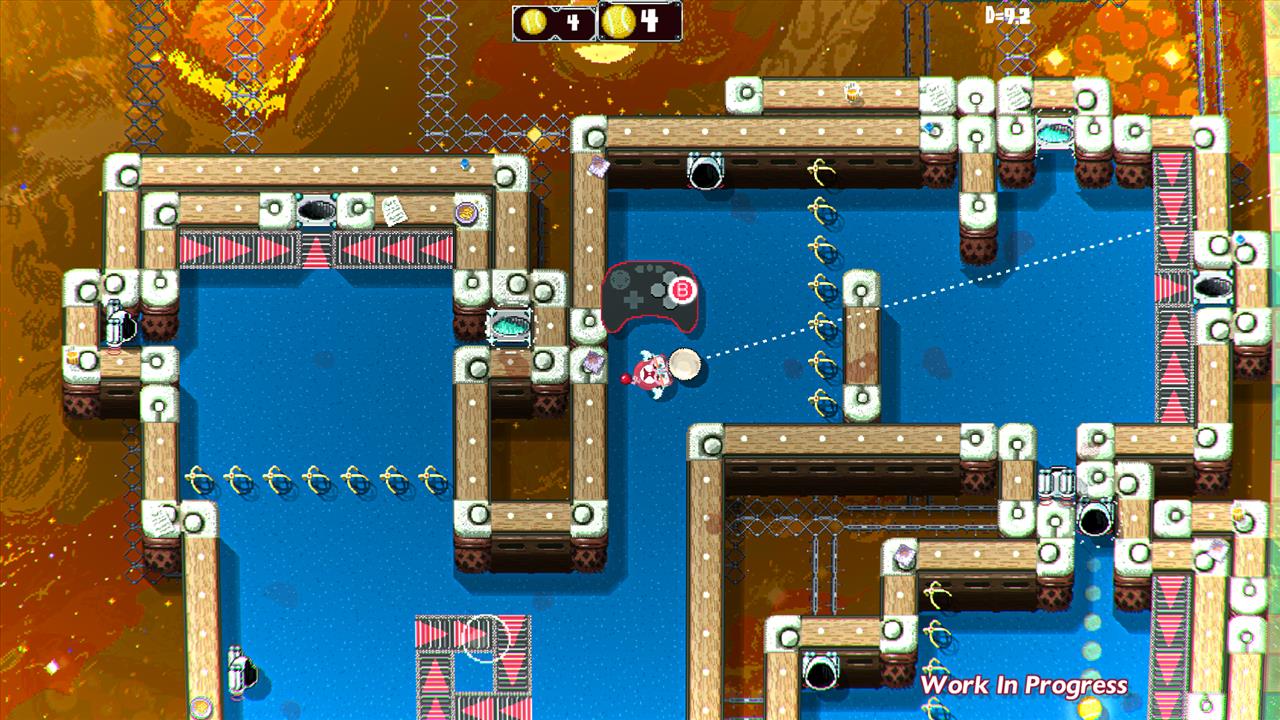 Mommy’s Best Games, the company behind the fabulous new arcade/puzzle game Pig Eat Ball has been kicking around the gaming industry since 2007. When I played Pig Eat Ball (now available on Steam  here) for the first time a few weeks back, I was floored by how playable, fun, and wildly original the game is. Poking around online, I discovered that Nathan Fouts, the lead designer and developer behind Pig Eat Ball, has something of a reputation for amazing ground-breaking imagery and unique gameplay mechanics. If you aren’t familiar with his work, you can find more details here, but unless you hate fun you really owe it to yourself to check out Pig Eat Ball.

I reached out to Mr. Fouts, and he was kind enough to answer some questions about the history of Mommy’s Best Games, his design philosophy, and the impending port of Pig Eat Ball to consoles.

I thought that maybe we should start out with a quick word about Porkerpillar, the Lewis Carroll-infused (and slightly nightmarish) game that you created for the 2012 “5 Button Competition”. When looking at your general design aesthetic, this game feels like an encapsulation of your art style and sense of humor. I know that this was 6 years ago, but the competition seems like it was such an unusual event, would you mind describing it, and the thought process that you went through to come up with Porkerpillar?
For Porkerpillar and Pig Eat Ball I tried to make art and characters that threaded the line right between fun and creepy. Like I'm telling you an pun-filled story, but keeping a straight face. 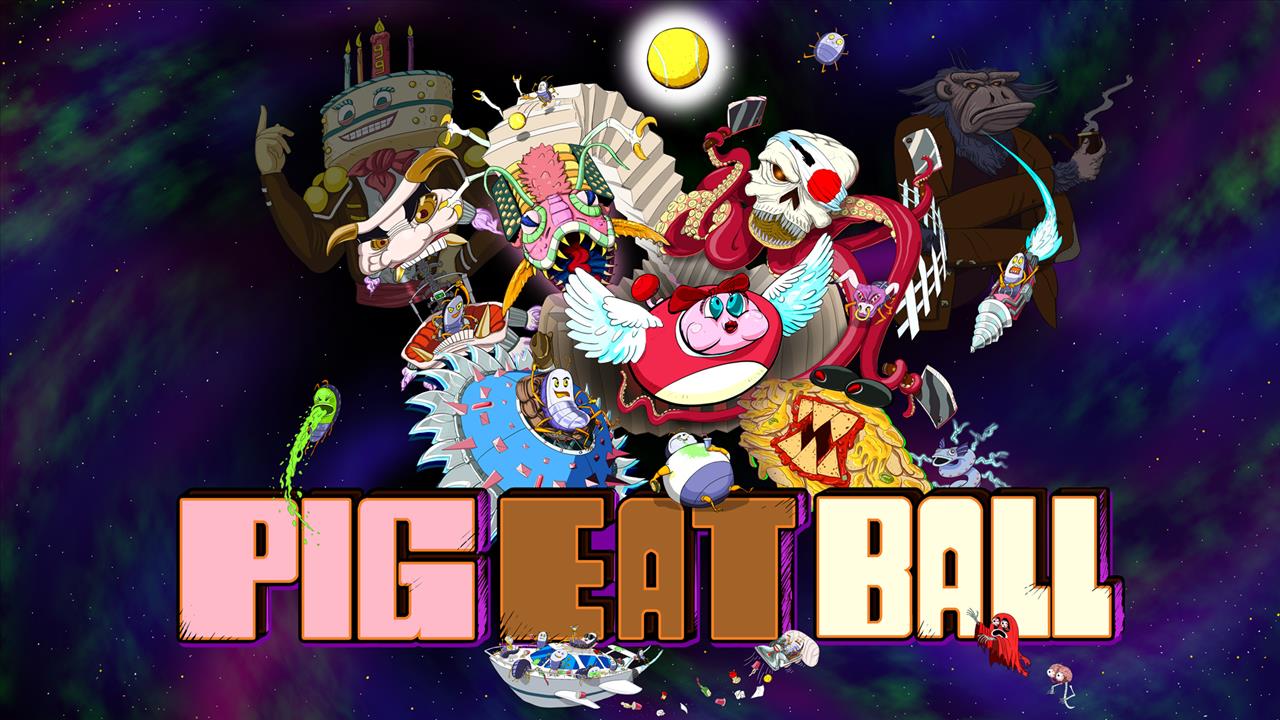 Would you mind filling us in a little on the history of Mommy’s Best Games? How large is the company, how long have you been around, how did you get started, where are you based, that sort of thing.
Mommy's Best Games was founded by myself and my wife back in 2007. I wanted to make great action games for older gamers, but each would have an inspired twist. And we've done that pretty well so far! 9 games finished and each one is pretty wild. I started back in 1998, working for Running With Scissors on POSTAL and POSTAL 2. I also worked on some unreleased Duke Nukem games. And I did the weapons for Resistance Fall of Man at Insomniac Games, among other things.

Each of Mommy’s Best Games’ games is very unique, but they all seem to share a certain wild out-of-the box creativity. The game page for Serious Sam Double D XXL trumpets enemies such as “fire-belching Torcher Kitties” and “evil pancakes known as Vuvuzelators”. Can you tell about your process in creating characters? Is there anything that you have rejected for being “too run-of-the-mill”?
Yes, I work very hard, from a design perspective, to make sure the ideas are interesting, original, and not what you'd normally see. If it's something I've seen before, I'll drop it. Whatever is in vogue, I don't do, or I try to twist it really far from the basic version. A computer can do "random" design combinations. I like to make "inspired insanity". There's a thread people's minds can identify running through my work, but they usually can't articulate it. That's a good sign. 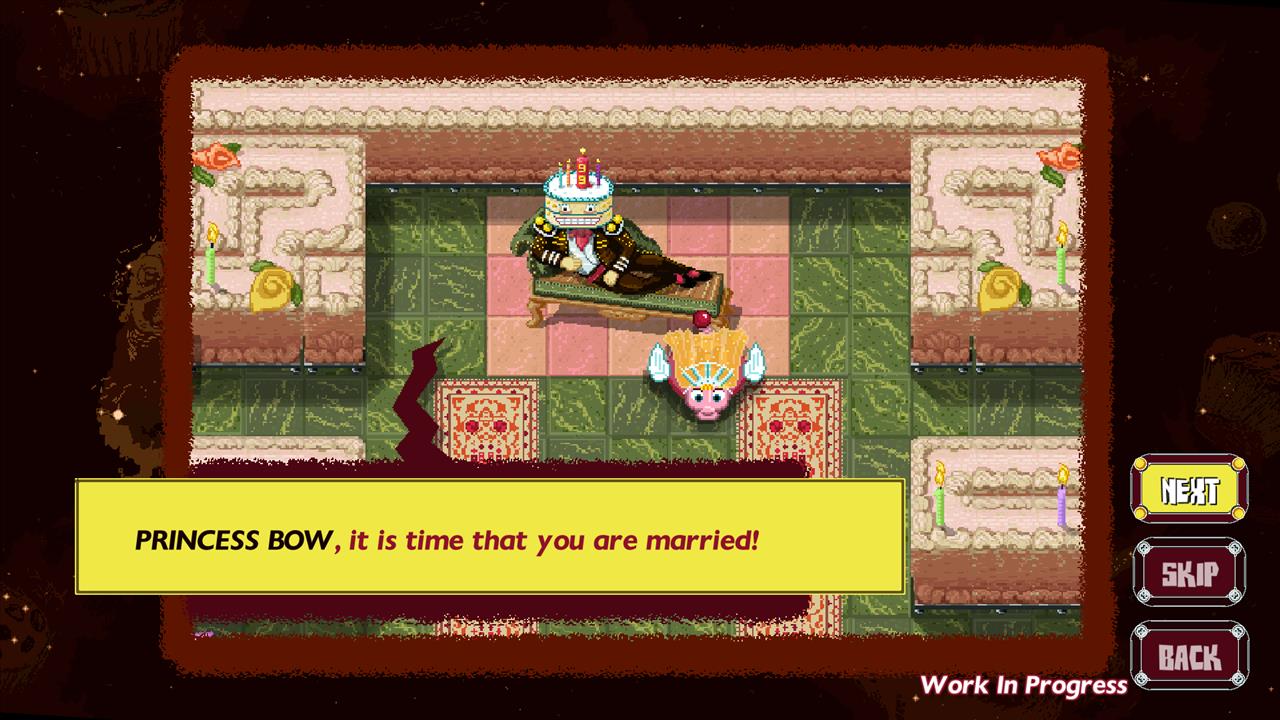 When I played Pig Eat Ball last week for a video, I was obviously delighted by the playability and unique feel of the game. What comes first: the mechanics, the character concepts, or the art style?
Mechanics. Concept. Everything really, it's just like a lightning bolt. I've gotten a lot of good ideas just driving to pick up my kids from school. The original concept for Pig Eat Ball was only in the 4-player mode "get points in the front, and guard your back". I worked on prototypes for a year and half before I got to the "barf it out" idea. I just kept pushing on "must make some new, interesting mechanic".

From the building block that is the “eat and barf” mechanic, you seem to have created an endless number of approaches and twists that keep the gameplay fresh. What was the inspiration for the core mechanic in Pig Eat Ball?
I hired a smart new designer, Andrew Curry, to help me build levels. I'd come up with the core ideas, and he was great at mixing them together for devious levels. When we got to working on a new world I'd say "okay now what--what are we doing with barf in THIS level??" It sounds funny now, but we would take the theme (Sushi, Farm, Kitchen) and start brain-storming on new things to do with the mechanics. But it always had to be mechanics+art, not just a reskin. I love old games that, once you get to a new world, it's all new stuff. I love that feeling. 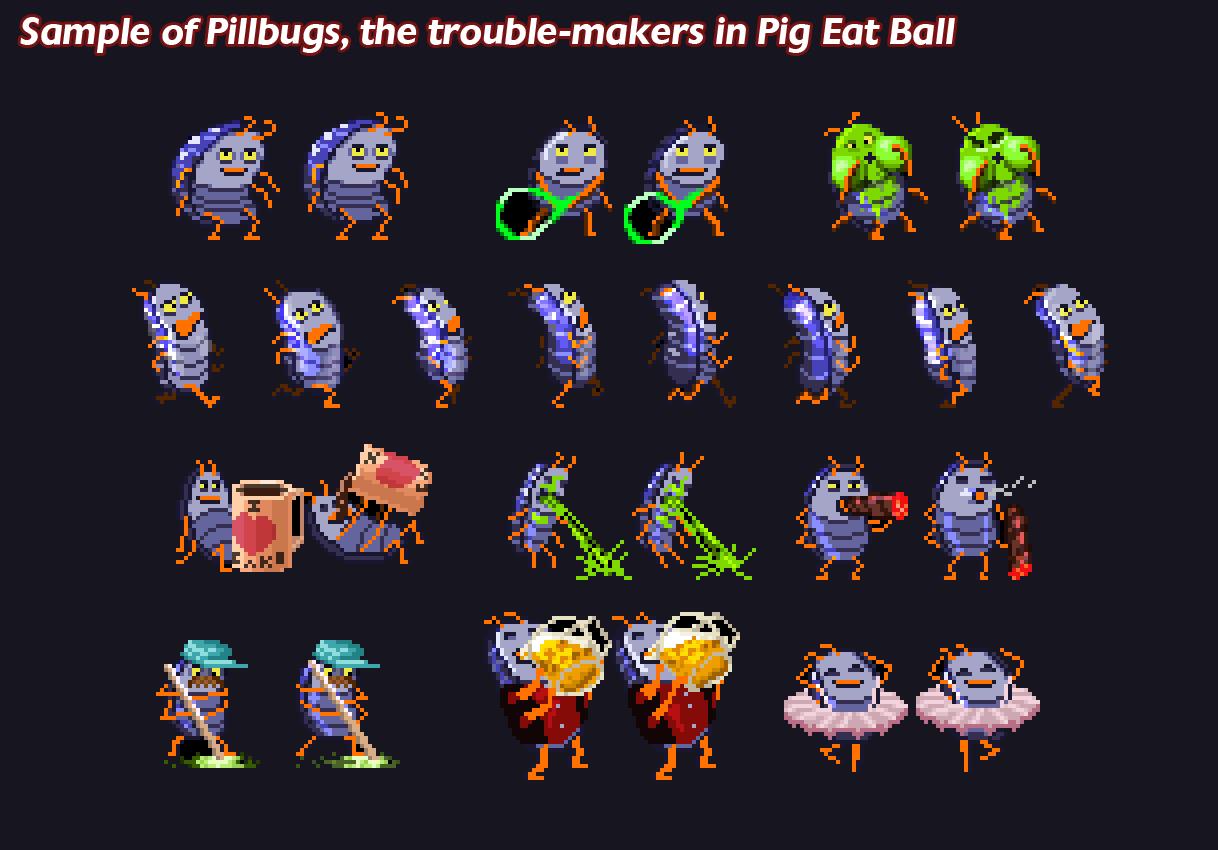 The music in Pig Eat Ball is outstandingly catchy. Could you talk a little about the soundtrack for Pig Eat Ball? Do you compose the music for your games, or work with an outside composer?
I love music but can't make it. I have a brilliant composer, Hamdija Ajanovic, that's worked with me for years now on all our Mommy's Best titles. I do give him the direction for each title then he runs with it. For Pig Eat Ball I had a long document of songs, and snippets to pull from. But the basics were "instrumental Beastie Boys + reggae + Ballroom Blitz". He creates such amazing music. I can't wait to release the official soundtrack!

When designing the game, was there anything that you considered that you eventually decided was going too far to mesh with the tone of the game? Anything that was too gross?
No poop, no farts. :)

Yeah, somehow that was too gross. Hamdija actually had farts in one of the songs, and I was adamant. "No farts!" He almost did a face-palm when he considered it. "Of course! That makes some kind of perfect sense!" 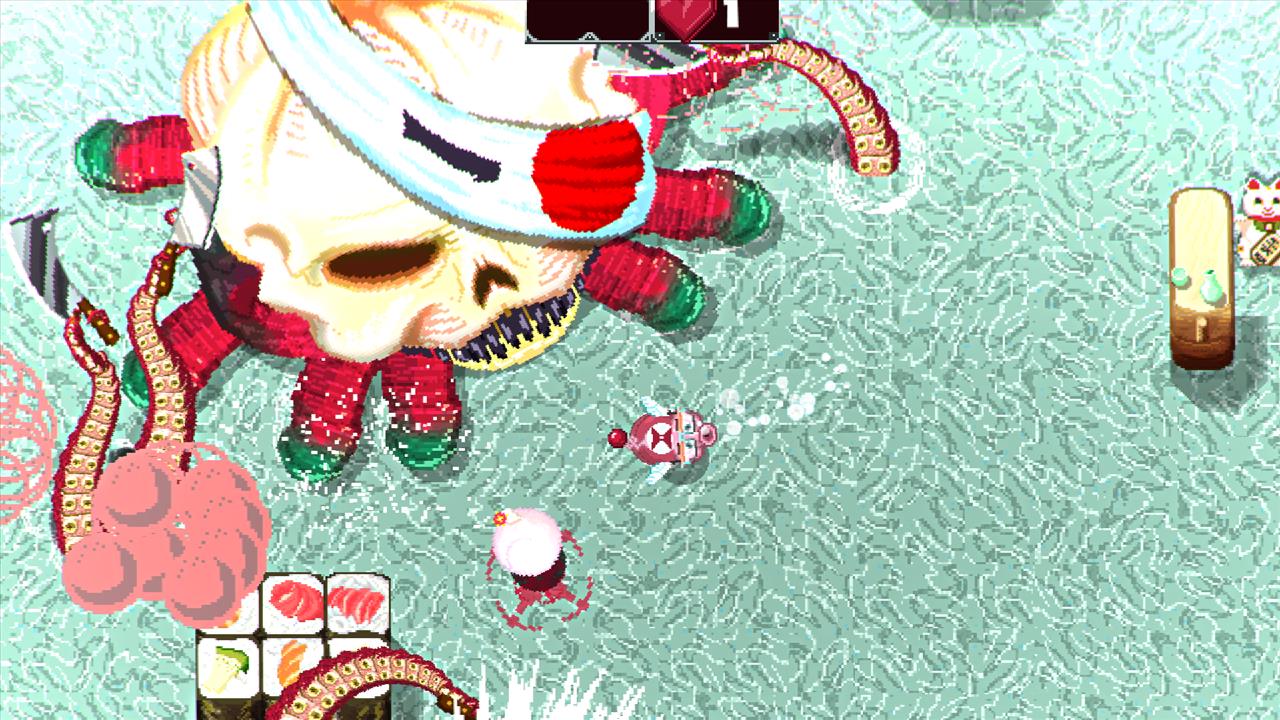 There is an enormous amount of content in Pig Eat Ball. How do you decide when the game is “done”? Was there any temptation to just keep working on it forever, like the Winchester Mansion of gaming?
There is lots of content I've cut. I wanted to get over the 6 hour mark for the single-player. But delightfully I think we're we'll over 8 hours, and more like 10 to 14 hours for most players. So that feels pretty good.

In terms of how to cut, cutting by Worlds was the key. We had more worlds designed. I also cut online-multiplayer as that's a monster to get working.

How have you found the response to Pig Eat Ball since it came out on Steam? What methods have you used to “cut through the noise” of the platform?
I've found it to be very difficult. I feel like there's a lot of "false positives" when a player is looking for games. They'll see an cool looking action game, but when they download it, it's not a great experience. I'm trying to show, through our previous titles and my experience, that Mommy's Best Games makes great work that is worthy of a player's time. 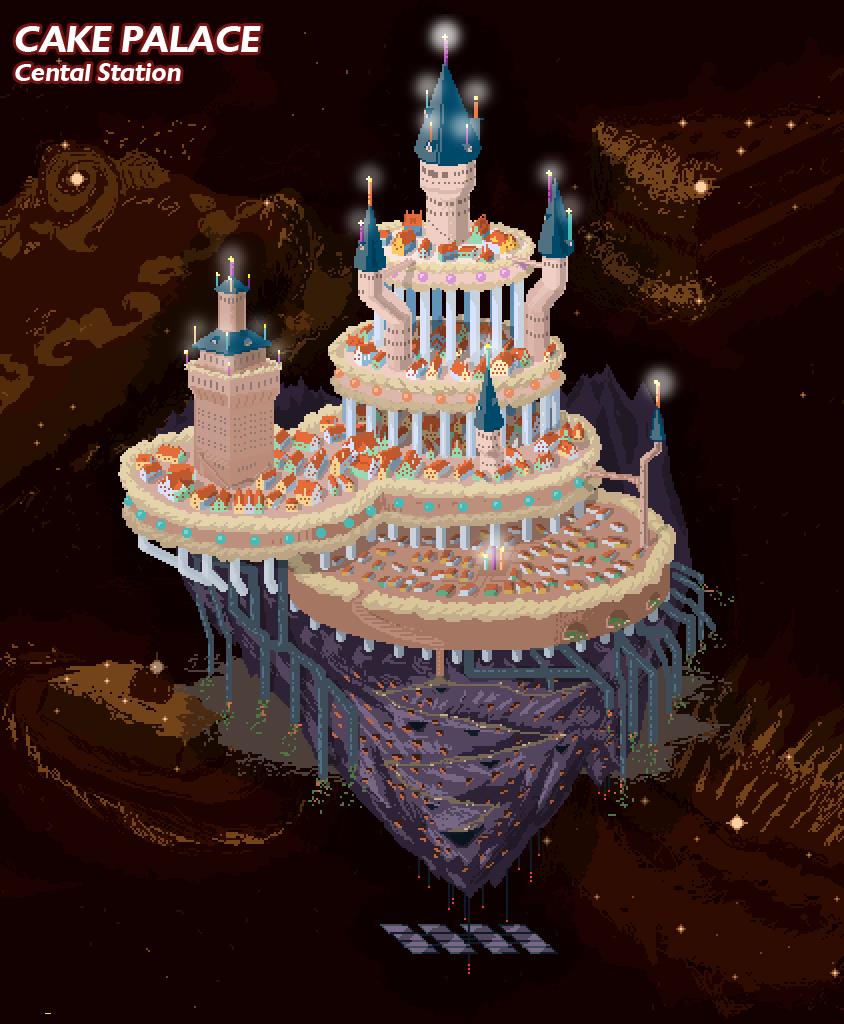 How are the ports to Xbox One and PS4 coming along? Do you have any estimates on a release date?
The console ports are doing pretty well! It's so fun to play it on hardware, on a big TV.

That's all thanks to our development partners at Super Soul. They're using Unity to port the game to console and they are Unity experts. I'm lucky to live so close to them.

Sony has this page up for the game already: https://www.playstation.com/en-us/games/pig-eat-ball-ps4/ 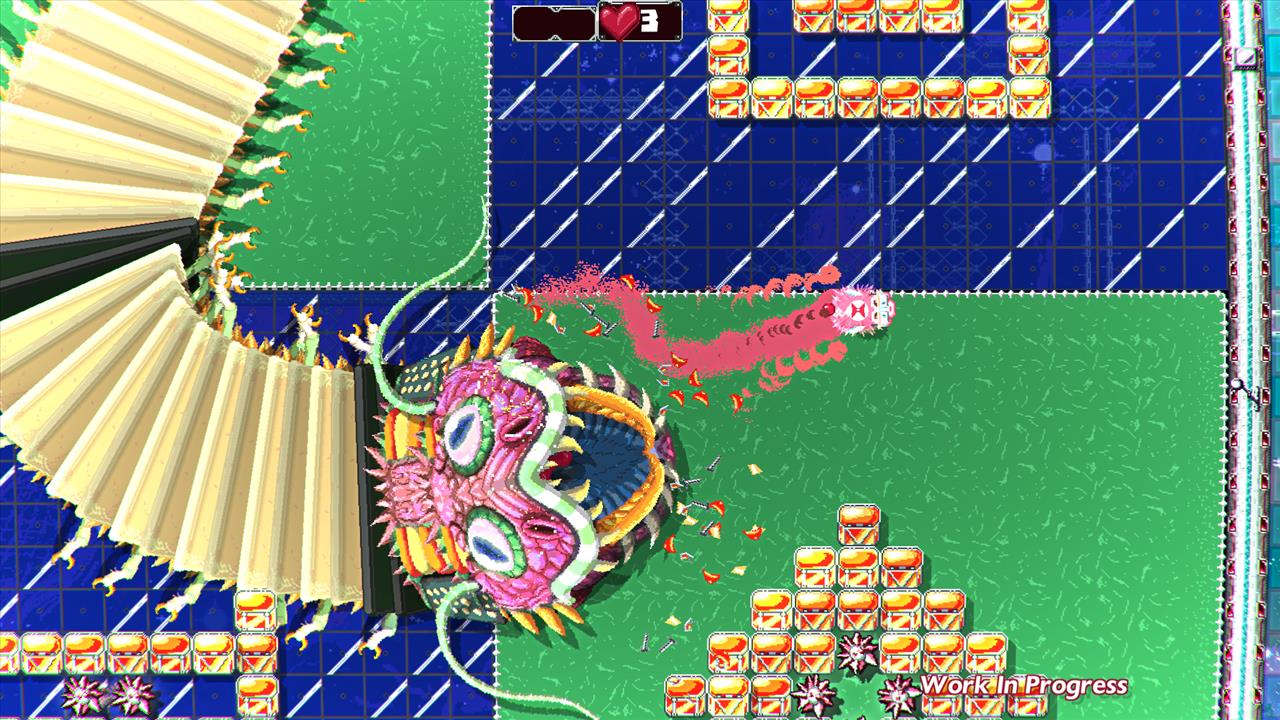 And finally, the obligatory Switch question. Switch fans are very adamant that all games must come to Switch. Do you have any plans to port Pig Eat Ball to Switch?
I would absolutely love to have it on the Switch. Let's just say, it's something we're working very hard towards, but I can't comment just yet. :)

Thanks for Mr. Fouts and Mommy's Best Games for their participation in this interview.