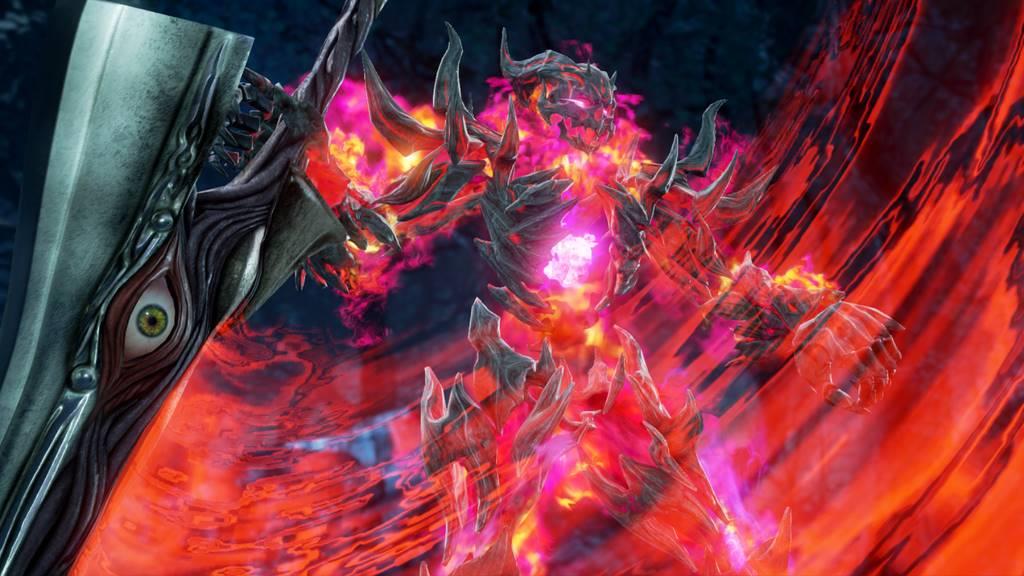 To say that I’m a fan of fighting games is both true and a stretch.  I’m more or less a fan of some 2D fighting games such as Street Fighter, Marvel vs. Capcom, and Skull Girls.  While there are some 2D fighters that I’m not that well versed in, 3D fighters are even worse for me.  For some reason I just never got the hang of games like Tekken and Virtua Fighter and tend to get tossed around by anyone I go up against.  However, here we are with Soul Calibur VI, the latest entry in the franchise that started back in 1995.  While I have played some Soul Calibur in the past, I’ve never had the chance to spend any significant amount of time with it.  Then again, what better time than the present to see just how good I can get.

Much like the previous games in the series, Soul Calibur VI is a one-on-one weapons-based fighting game with each fighter using a certain type of weapon, this time taking place in the late 16th century.  Besides the usual mechanics such as the different basic attacks and eight-way running, new to Soul Calibur VI is the Reversal Edge mechanic which lets you guard against an oncoming enemy attack and follow up with quick attack.  If this attack hits, the game goes into a slow-motion segment where you and your opponent will each choose one of three attacks.  These three attacks work similar to rock-paper-scissors and whoever chose the stronger attack will deal an additional attack to your opponent.  You also have a Soul Meter that will fill up as you attack your opponent.  When the Soul Meter is filled to at least one level, you can activate a Soul Charge to give you the ability to pull off special Soul Charge moves for a limited amount of time, or a Critical Edge attack to deal a lot of damage to your opponent.

Soul Calibur VI features a few different game modes you can play through.  Battle Mode is where you can take on eight CPU opponents one after the other in Arcade Mode, fight against a friend locally in Versus Mode, or you can head into Training to work on your skills against a dummy opponent.  Since each fighter uses a different type of weapon, this is a good chance to practice with the different fighters to see which fighting style and weapon works for you.  You can also get used to the different arena types as several times throughout the game you might be in an arena with something like wet ground or on a ship during a storm where it can be pretty easy to accidentally slip out of the ring and lose the round, speaking from experience. 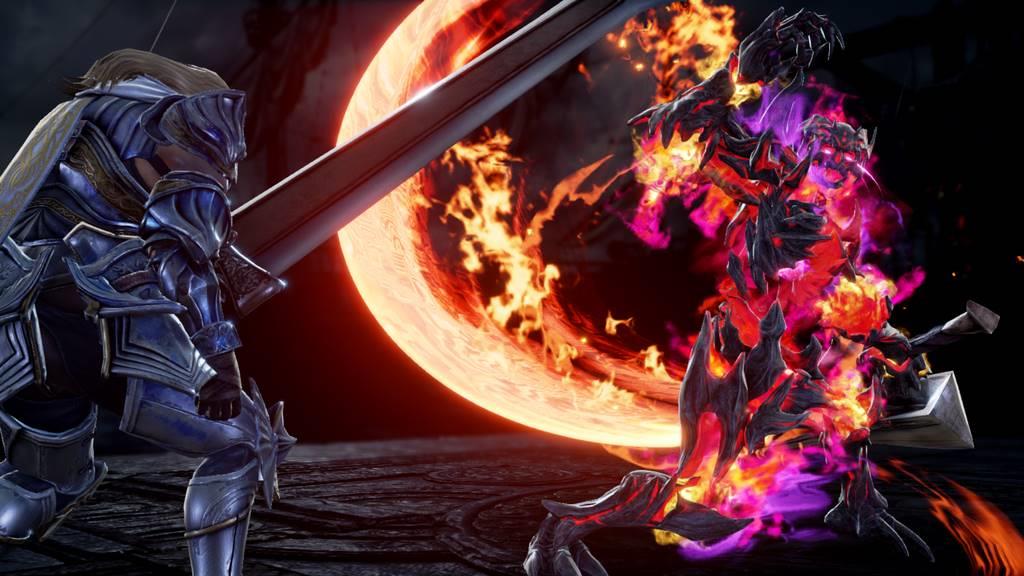 The game actually recommends starting with Mission Mode since it contains the game’s tutorial.  Mission mode is essentially a story mode for a character that you create.  After creating your character the story begins proper with a character named Zasalamel basically explaining how a great evil known as the Evil Seed has altered your soul, linking it with the Astral Chaos, a realm of great power that will eventually consume your soul and kill you.  You’re told that to extend your life you must seek out astral fissures, massive amounts of force that will either destroy anyone weak enough who encounters them or turn them into a being known as a malfested.  However, when someone powerful enough approaches one, a powerful being known as a berserker will approach.  Defeating them will let you obtain power from the fissure and let you continue to live as well as resist Astral Chaos’s attempts to devour your soul.

Mission Mode is made up of multiple chapters, each with story and fighting elements, both required and optional, and your first several missions act as the game’s tutorial.  The fighting missions are simply one-on-one battles, usually either two out of three fights, three out of five fights, or a couple of back to back one round battles.  Each mission you complete will earn you experience and/or gold.  As you earn experience you’ll begin to level up, giving you more health.  After progressing far enough in you’ll be able to buy weapons and items and explore the map to do some side quests.  Exploring is a great way to grind for experience and gold to help you level up and gain new items and weapons, but it has a couple of drawbacks. 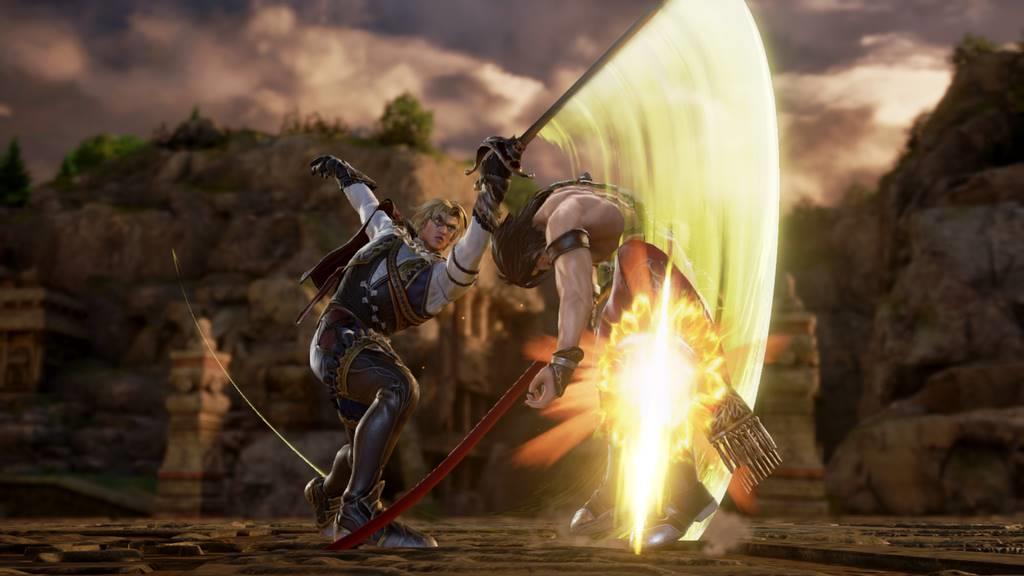 It costs gold to explore and the amount it costs from your current location to your target destination all depends on the distance; the farther out you go, the more it’ll cost you.  Along the way you might run into a random battle.  Defeating the opponent will earn you gold and/or experience, but losing will end your exploration putting you back at your starting point without any refund to the gold you spent thus far.  Even if you defeat the opponent, any health lost remains lost until you reach your destination.  That’s where the items come into play.  You can use items prior to a battle to restore some lost health in case you don’t think you’ll make it to your destination alive.  That aside, I spent a lot of time exploring around to level up a bit since I’m not typically that great at Soul Calibur and can use any advantage I get…plus you can get some pretty nice weapons for your troubles.  Finally, you can take the gold you’ve earned and exchange it for SP, or Soul Points.  While gold is spent in Mission Mode, SP is spent throughout the game for things such as unlocking items in the Museum Mode.

The other mode you can play is Story: Soul Chronicle.  This is essentially a mode that let’s you check out the stories of the individual characters in the game as well as the main chronicle of a cursed sword that brings them all together.  More often than not you’ll have to fight a one-on-one battle against an opponent, or a couple of one-on-one fights against single opponents back to back and since there’s no experience leveling here, the fights won’t be as easy going, even the early fights at the start of the journey.  I was breezing through a lot of Mission Mode as I was leveling up and the early fights there were pretty simple with the opponent simply either just standing there or guarding a lot.  In Soul Chronicle however, a couple of the early fights taught me not to just button mash everything, but to actually have some strategy in how I attack.  I know that sounds pretty obvious to a lot of Soul Calibur veterans, but I do believe that it’s actually making me a better fighter. 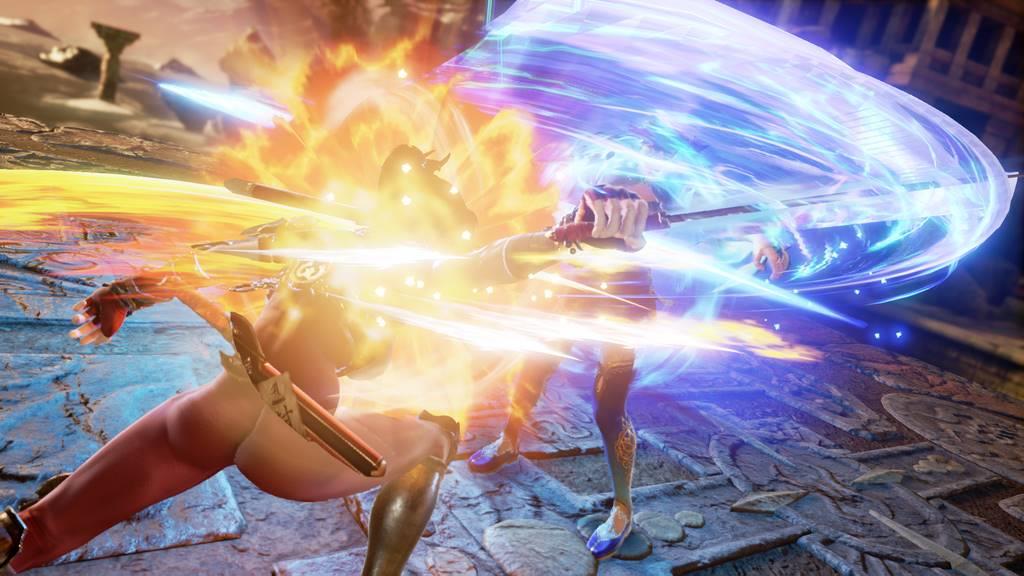 The other three modes to check out are Network, Creation, and Museum.  The Museum Mode allows you to look at various artwork and videos from throughout the series, listen to music, and look at various tips and strategies for the different fighters, while Network lets you fight in casual and ranked matches online.  Unfortunately I was unable to check out the online functionality at this time as it requires PlayStation Plus which I do not have at the moment.  Should that change down the road I’ll post an update about my experiences with that.  Creation Mode on the other hand was pretty fun to mess around with.  You can edit existing fighters in the game to your liking or even create your own fighter from scratch to use in the other modes.  You can change their look, their equipment, even their fighting style.  You can even share one of your characters across the PlayStation Network to appear in other players’ games.

For someone with minimal Soul Calibur experience outside of getting tossed around by my friends, I enjoyed my outing with Soul Calibur VI.  The graphics look good on the Unreal Engine and it controls pretty well.  I know this is going to sound weird in a way, but while I do like the Mission and Story Modes, my only real complaint with them was that it’s basically story element, one-on-one fight, story element, one-on-one fight, and that’s it.  In other words, it can get kind of monotonous after a while, especially in the early going where I’m just whizzing through each battle.  Thankfully there are other modes I can play and hone my skills and if I ever hop onto PlayStation Plus, I can still get tossed around by my friends, except maybe now I can put up more of a fight.  For someone who’s barely touched a Soul Calibur game, I can definitely say that Soul Calibur VI was a lot of fun.

For someone with little Soul Calibur experience before now, I feel that Soul Calibur VI can be a pretty good starting point for someone to the series.  The tutorial in Mission Mode will help you learn the basics and you can always look up more advanced moves and techniques for any character at almost any time.  Add in the Mission and Story modes and there’s a lot to do beyond just fighting several random CPU opponents and calling it a day.