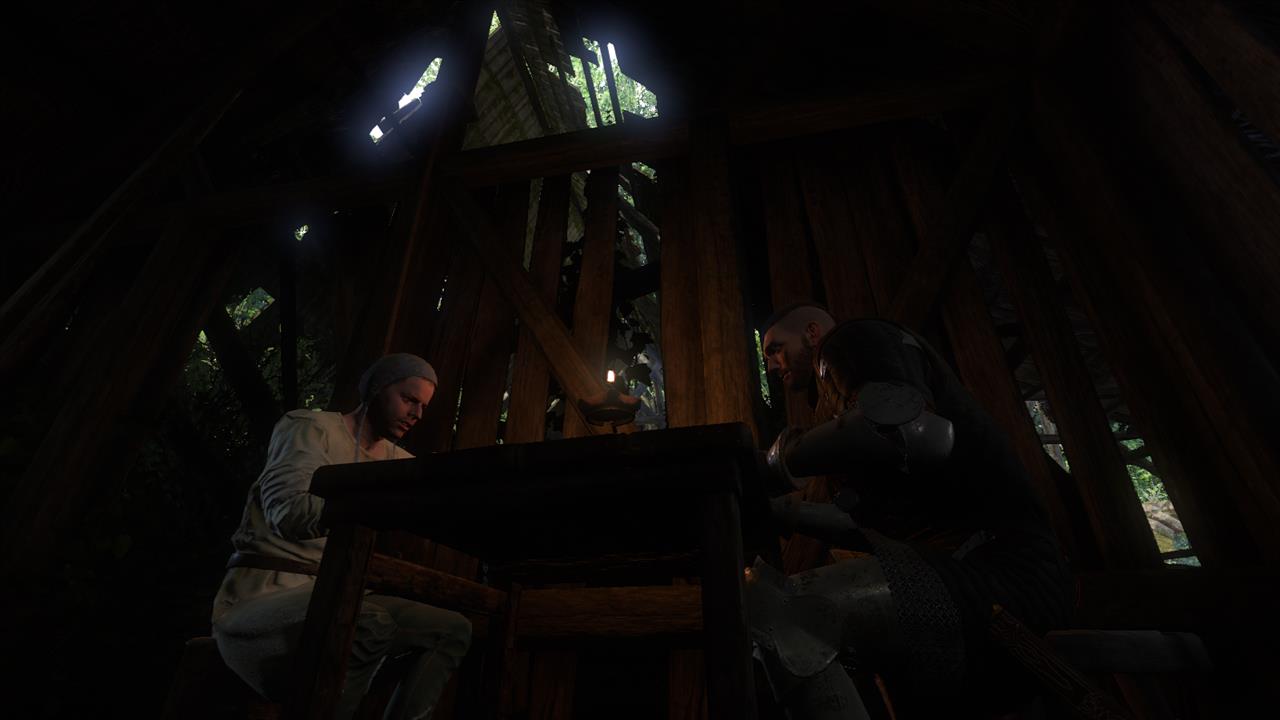 Written by Randy Kalista on 10/16/2018 for PC
More On: Kingdom Come: Deliverance

For The Amorous Adventures of Bold Sir Hans Capon, I wanted to meet up with him as organically as possible to kick off the DLC. I’d always seen his horse parked around the city, the horse always dressed in a conspicuous and intentionally rich-looking horse clothes, if “horse clothes” is the right term. Usually I see his horse at one tavern or another in the city of Rattay. Perhaps a few other places. But this time his horse was chilling outside of the baker’s.

That didn’t matter. He's always hitched his horse up in half a dozen different places, but just walks all the way up the lane to a tavern anyway. He walks past me out of nowhere. We chat. We ride to the lower castle. I quietly follow him up into the dining hall, where Sir Radzig Kobyla gets up out of his seat and turns to face the corner the moment Sir Hans Capon sits down. I can vaguely understand why. Kobyla is one of the good guys. He’s a strong, steady mentor, and he’s always liked and trusted me. Capon, however, is an overgrown frat boy. He’s got more money than brains, and more brains than responsibilities. Now Kobyla retakes his seat on one end of the table as Capon stands up from his seat--now it’s Capon’s turn to face the corner.

This is all harmlessly janky AI behavior in Kingdom Come: Deliverance. But I like to fill in the blanks with a daytime soap opera script. 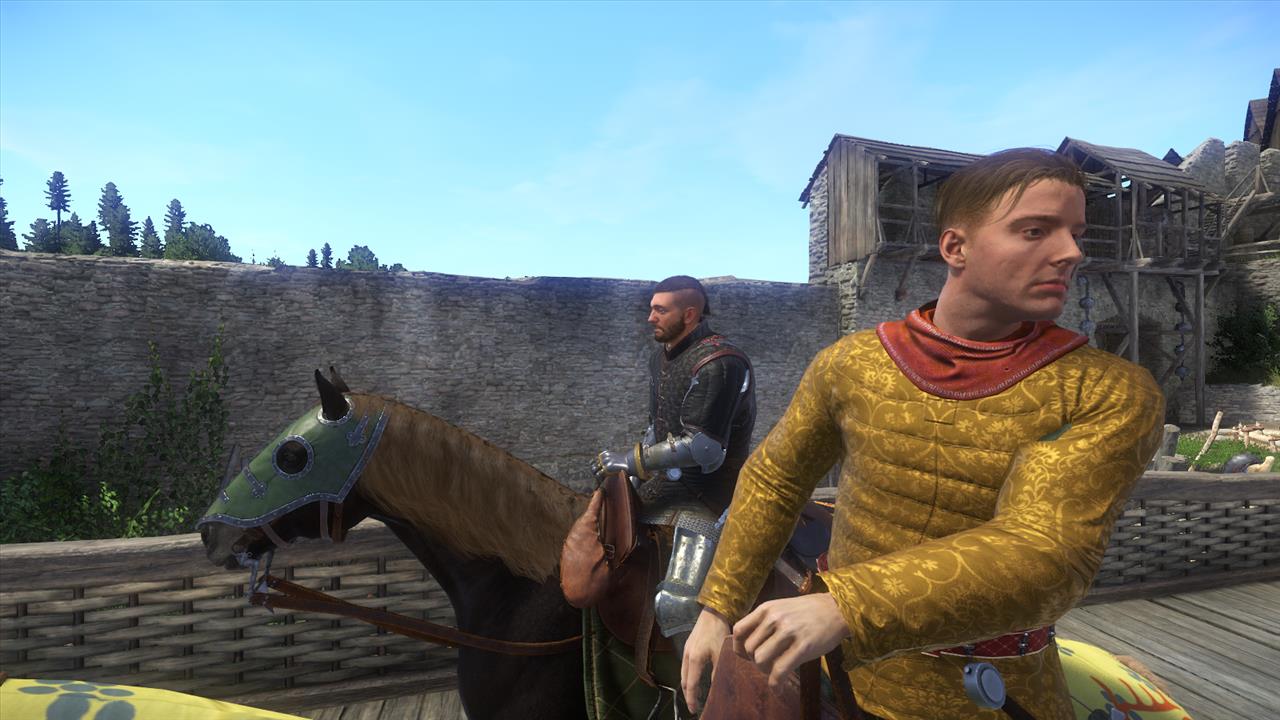 I finally break the silence and approach Sir Hans Capon. “Greetings,” he says. “What do you need?” I ask him, “Are you planning some new adventure?” like I’m a 12-year-old boy with his best buddy on summer vacation. And this adventure literally begins like I’m passing notes to a girl in class. Out of the blue, he's completely in love with Karolina, the butcher's daughter. Capon sends me off with my instructions. Everything we’re about to do is in the name of love. But with Capon involved, it's bound to be a bumpy ride.

I pay one more visit to Theresa, Henry’s own past amorous adventure, just to see if she or I will have anything else to say to each other. But no, not after our one romantic tryst in the vanilla campaign. She doesn’t bring it up again, and neither do I. I guess that’s just how it’s going to go. The miller butts his way into our conversation and can’t figure out how to exit the scene, but I was just leaving anyway. 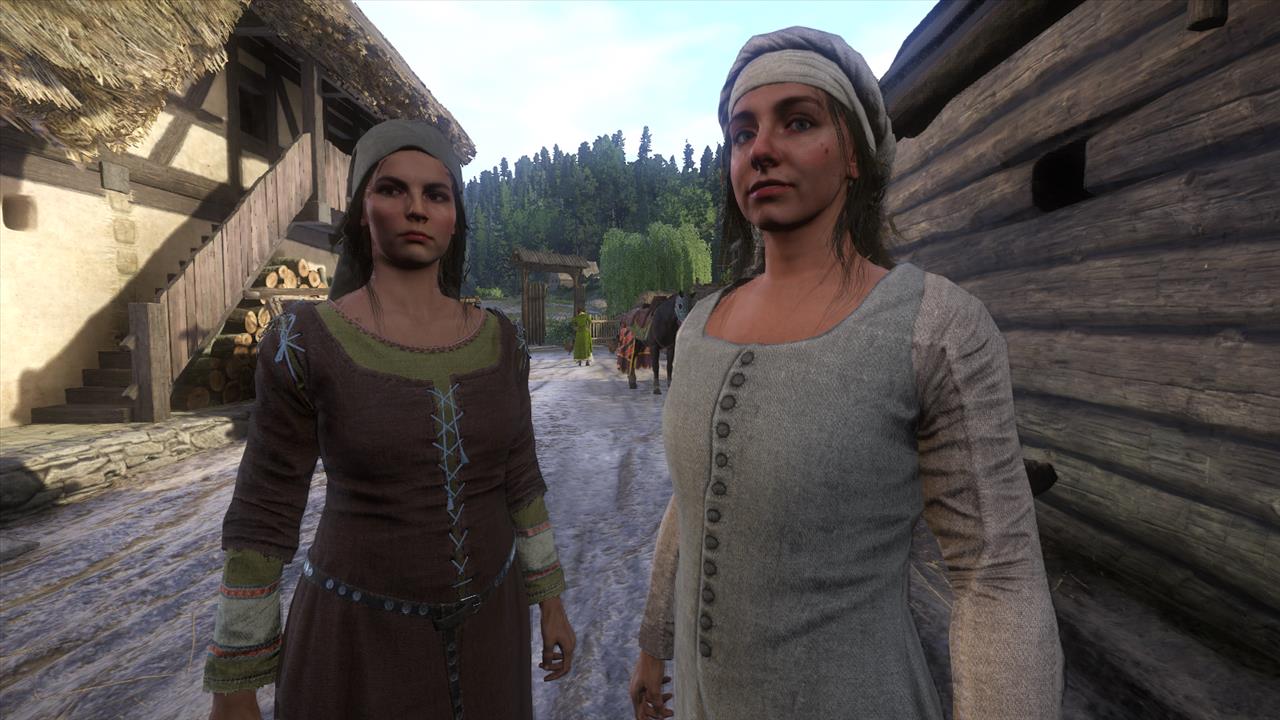 Back to Capon’s adventure, though. I head to the town of Ledetchko in search of a dice player that won a valuable necklace off Capon. As in, Capon gambled it and lost. I ride to the river-split town of Ledetchko, the rain falling harder every mile. I swear it was raining the entire week this adventure took place.

As soon as I get there, I can tell this mission structure is going to play out exactly like so many other missions in Kingdom Come. Go to Person A, who tells me to go to Person B, then Person B is dead or missing, so I have to find Person C in order to kill Person D that killed Person B, and blah blah blah. I’m instantly deflated. I was hoping for something other than the most common mission structure found in Kingdom Come. Regardless, I throw dice with the guy, as a way to thank him for the info.

This guy happened to have a blue Devil’s Head die. Didn’t impress me much during his first few rolls, but its value became more and more apparent as the game went along. I lost 100 coins, but whatever. I bought out the inn’s room for life for 200 coins and feasted on roast duck anyway. Actually, the game glitched when I bought out the room the first time. It didn’t take. I’d paid the man the 200 coins for the room-for-life, but the door didn’t recognize it’s a door and it wouldn’t open. I went to the innkeeper, paid another 200 coins, and then it finally took. That’s was a 400-coin home I just paid for. Doors seem to be having more and more problems the further my game goes along. 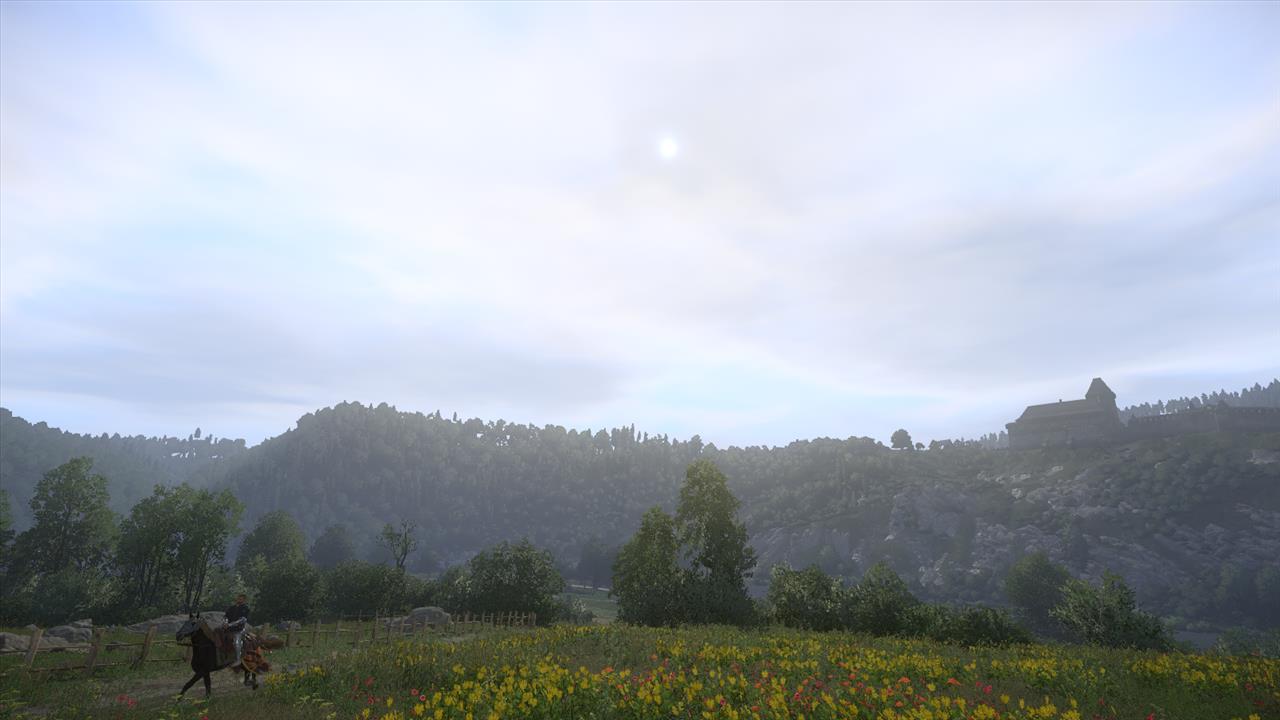 From there, the adventure takes a turn into Robin Hood territory. Not literally that legend, and certainly not with such noble intentions, but it serves as a Bohemian equivalent. Hope you have a penchant for throwing dice, because that’s what The Amorous Adventures of Bold Sir Hans Capon is all about. More than that, however, I felt like I was getting away with some shady business by the time I was done with Polish Robin Hood and his Merry Men. They’re a lewd, heavily cussing group.

I felt like an idiot, though, when I went back to Part 3 Subplot C Sub-Subparagraph B6 of the entire chain of events. Suffice it to say, I’d discovered the answer to one mystery, but had forgotten it not much later.

I stumbled my way through the remaining branches of this increasingly fun adventure. And I don’t want to spoil too much, but if you’ve ever watched Steve Martin’s Roxanne, then you’ll have a clue as to where The Amorous Adventures of Bold Sir Hans Capon is going. 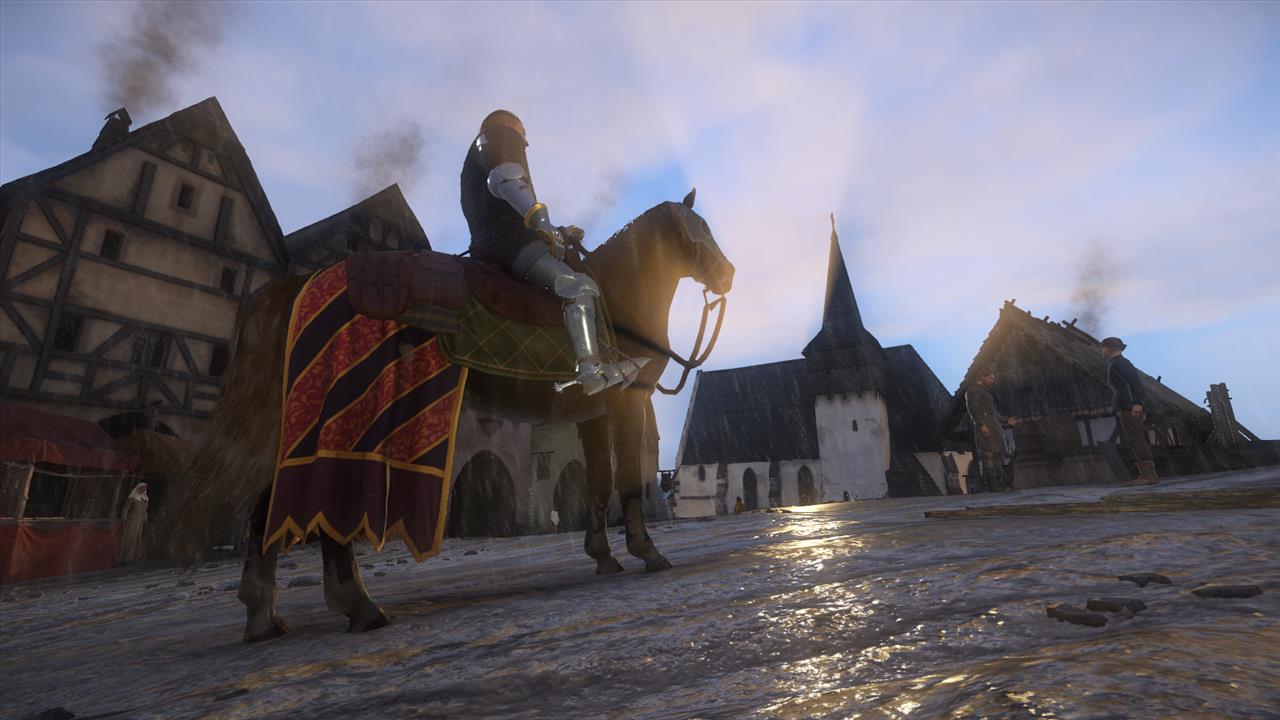 I had to find Sir Hans Capon in his room in the evening to keep the adventure going. But here’s where I had more door glitches show up. I had to click on his door to activate things, but the door died. I tried a week’s worth of in-game workarounds, but nothing solved my door glitch. Ultimately it required a reload from a few hours back.

The Amorous Adventures of Bold Sir Hans Capon took me back and forth over the bottom third of the map. The place is still gorgeous, but the mission structure is getting old. This DLC did everything in its power to mix things up, but nothing that breaks new ground. The end peters out to nothing—which hits the exact right deflating note for a pompous playboy with no definition of true love to draw upon.

Sir Hans Capon’s DLC could’ve been chopped up and interwoven into the vanilla game’s numerous subplots, but it was much more fun, this way, taking it in as a whole. It’s a romantic comedy with a bloody start, but that’s medieval Europe for you. I was only disappointed the DLC starts off with a mission structure that's a little too tried-and-true for Kingdom Come.