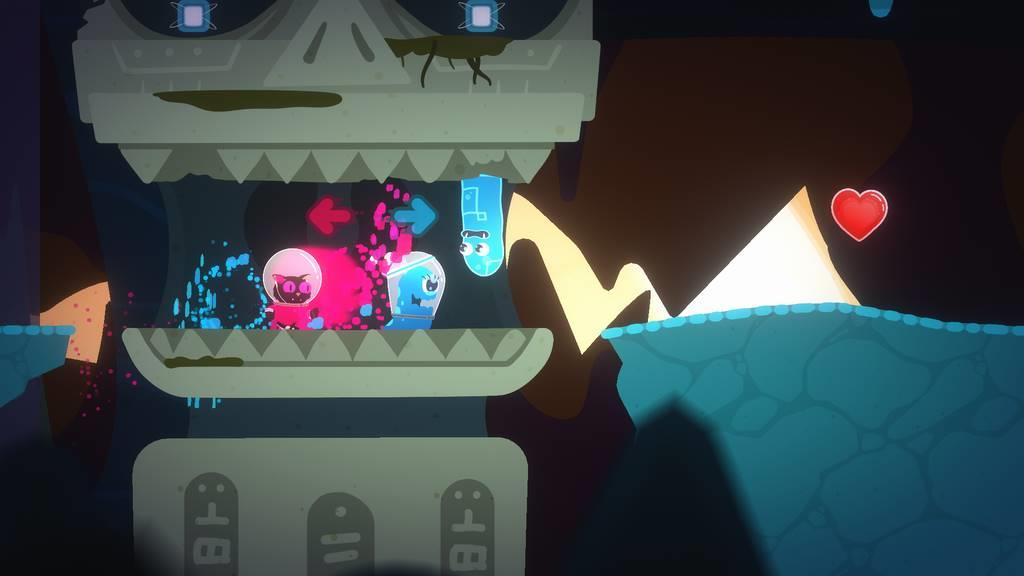 A few years ago, I decided that it was time that I learned to play the piano. I was recovering from a fairly severe hand injury, and I figured that I could scratch “playing an instrument” off of the old bucket list while exercising my injured appendage. Millions of people have learned to play the piano, I thought, so why would I not be able to pick it up?

After a couple of months of lessons, I threw in the towel. I realized that I simply did not have the coordination and patience to achieve my lofty goal of piano mastery. After a lifetime of not thinking about the independent movement of my hands, the act of concentrating on the function of each of my fingers became too much for me. It was causing anxiety, and I started worrying that if I continued I would start stuttering.

This is much the same feeling that I get when sitting down to play Joggernauts. In single player mode, Joggernauts requires an almost superhuman level of coordination and concentration. My hands refused to cooperate with me, and I realized that I would need hours of practice in order to succeed. I literally could not get past the second level (the first level is a tutorial). I realized that I was going to need help with this one. Joggernauts broke me in under an hour. 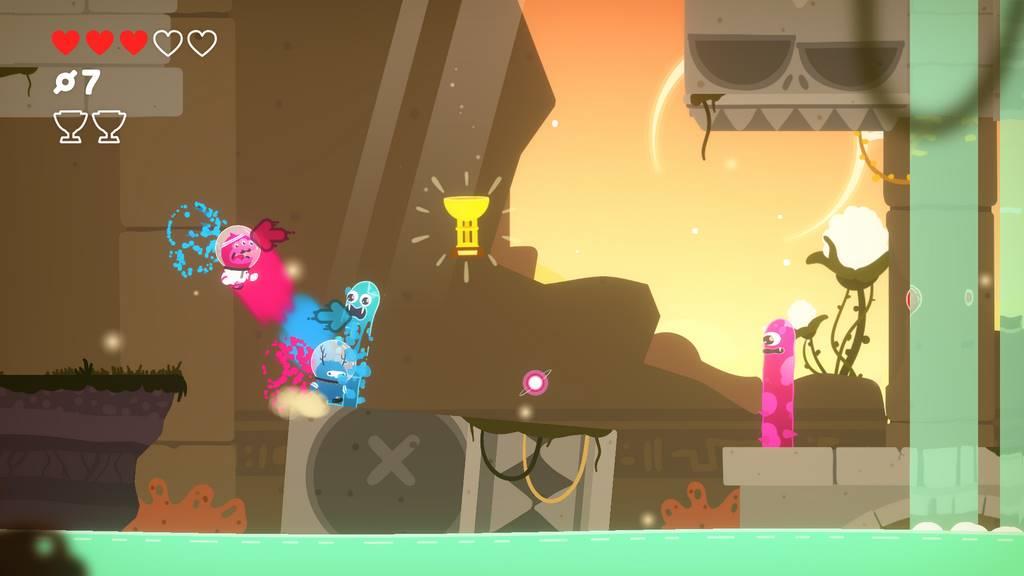 Joggernauts begins with the captain of an alien spaceship delivering a disappointed lecture to his crew. A hole has been torn in their spaceship, and the captain’s beloved trophy collection has been whisked out into space. His crew must now bop from planet to planet, running missions to recover the captain’s trophies. It is the lightest sketch of a story imaginable, but it does help set up the world and the “running and dying” gameplay.

Joggernauts shares a lot of DNA with Bit.Trip Runner. It’s almost as though developer Space Mace took a look at Bit.Trip Runner and said “How can we make this exponentially more difficult?”. The answer was to add multiple characters and a diabolical color-matching dynamic, and then cranking the difficulty volume up to eleven. 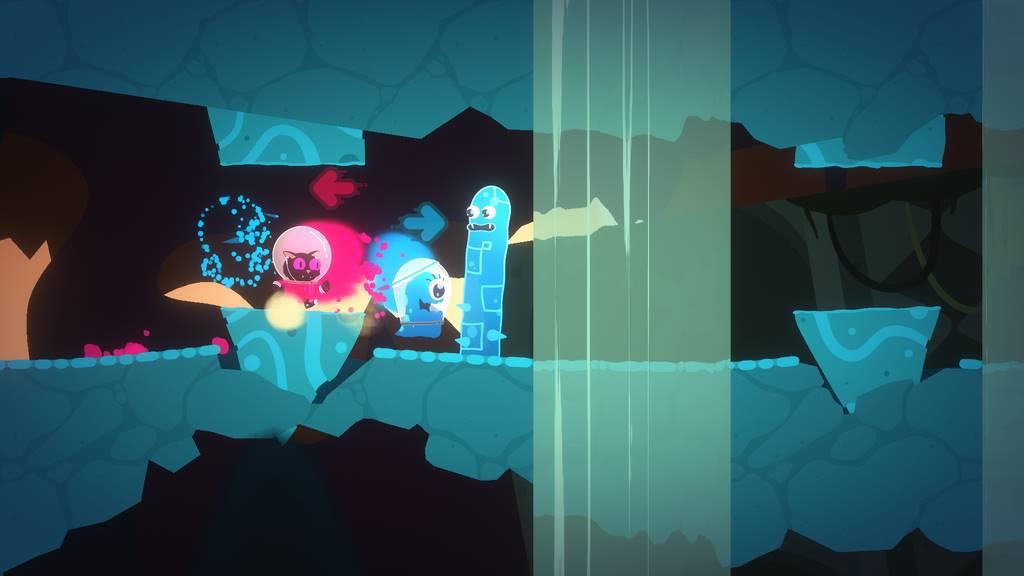 In Joggernauts, players can select from a number of cheerful little alien guys (my favorite is a little blob-like character that resembles “Bob” from Monsters vs. Aliens). In single and two player, two characters are on the screen, running relentlessly from left to right through a nicely rendered scrolling back ground. One guy is pink, and one guy is blue. Almost immediately, the little runners encounter obstacles in their path. The blue guy can survive colliding with blue objects, and the pink guy can handle pink objects. But if one of the little aliens runs into an object that does not match his color, he (she? it?) loses one fifth of the party’s shared health and takes a second or two to respawn. The other character continues running forward regardless. So, if the pink alien hits a blue object, it “dies” for a few moments, but the blue alien continues on trucking forward. If the next object is blue, there’s no problem. But if the next object is pink then the blue alien splats into it, and another 1/5 of the life bar disappears. With this mechanic, it is possible to lose the entire life bar within about 1.5 seconds.

In single player, the player is responsible for flipping the two characters back and forth, swapping the leading color at will. But in two-player, each player is responsible for the timely press of the “switch” button, bringing themselves to the front of the pack in time to bash into objects of the correct color. This requires some serious communication and coordination, as one misstep can lead to cascading failure. 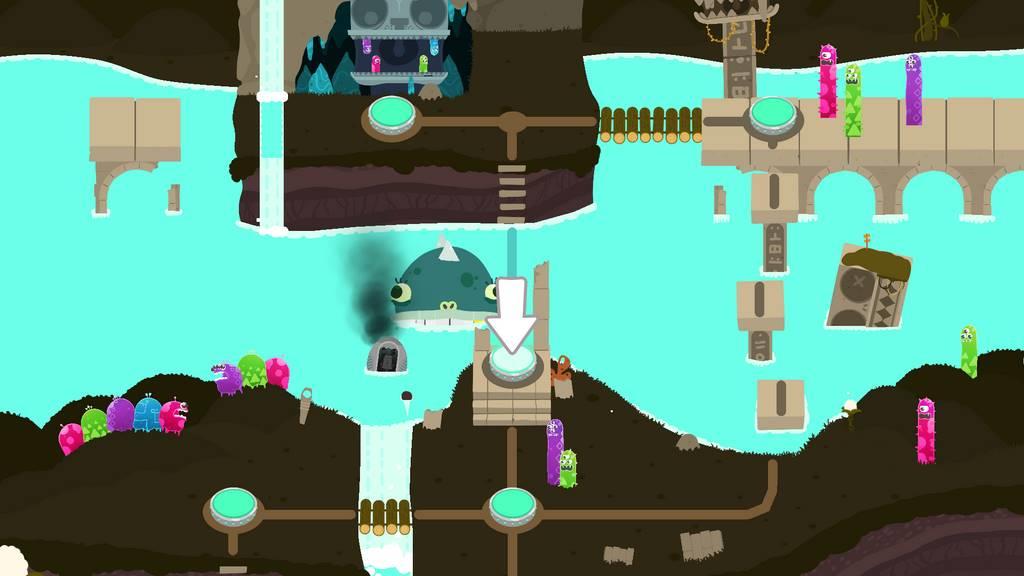 Everyone still with me here? Okay, now…lets add some platforming jumps into the mix. Both characters have to jump to overcome gaps and obstacles. Missing a jump, running into an obstacle, or falling down a gap results in a death, and the loss of 1/5 of the health bar (and a momentary lack of on-screen representation of that character’s color). If one character is in the lead and is mid-jump and the other character switches with them, the lead character finds themselves having to make the jump again immediately. This almost assuredly leads to the jump being missed, as players rarely pull off the Barry Allen/Flash reflexive button push needed to survive.

Still, with all of this “communication” and “coordination”, it is possible to get into a decent rhythm with two players and start to work through Joggernauts’ three worlds (encompassing 20 or so levels). Magic is possible here. With some practice, two players can begin acting in harmony, quietly depending on each other to switch and jump at the correct times. But what is it like to play Joggernauts with three players? What about four?

In order to test these more complicated scenarios, I took my Switch to work with me and poked at my videogame-loving co-workers to join me for a Joggernauts lunch. While playing Joggernauts was a fun way to pass the lunch hour, we quickly realized that actually succeeding at the game with a larger group would take a time commitment that we simply were not able to make. If folks want to take this game seriously in multiplayer, they will need to assemble a Joggernauts team and commit themselves to some serious practice. Each player that you add to Joggernauts makes the game exponentially more difficult. 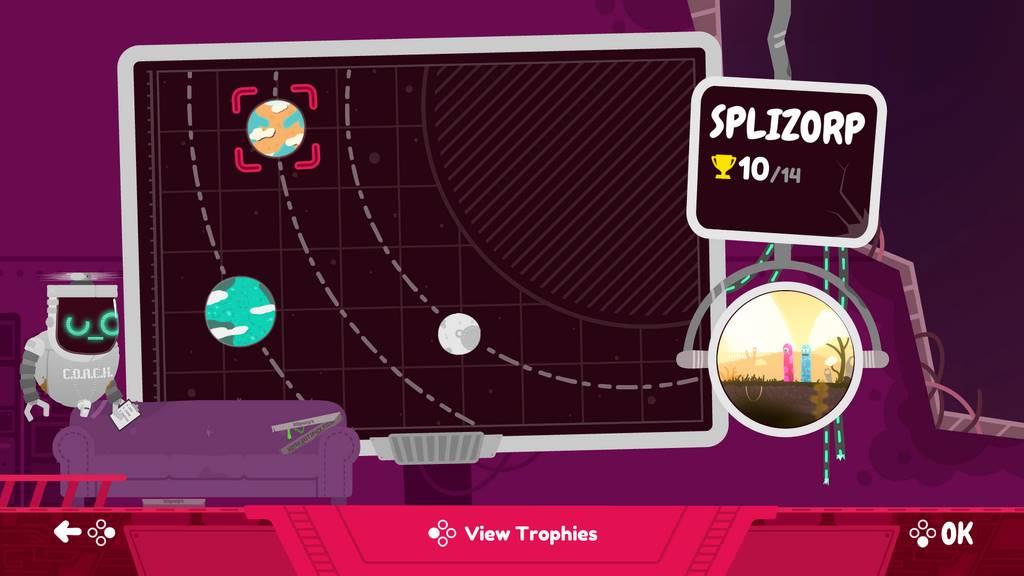 With four players all running at once, one mistimed switch to the front can slaughter the entire pack instantly. With all of the chaos and dying going on, it is possible to have the entire party wiped out within five seconds or so of starting a level. Luckily, level restarts are instant, so it is possible to get into a get in a rhythm of dying and restarting, where the group just tries and tries and tries until they get it right.

This four player co-op brings games like Overcooked to mind, but Overcooked players should tread lightly into Joggernauts territory. While Overcooked is playable by families with younger children, Joggernauts will break these families and make their children cry. This game is hard. I imagine that a small culture will spring up around Joggernauts  (if it hasn’t already) with YouTubers screaming amusingly at their TVs, their viewers, each other, and God while trying to conquer Joggernauts.

I haven’t even mentioned how you need to collect a certain number of trophies to move forward in the game (beating levels isn’t enough), and how some trophies are locked behind keys. Then there is the fact that the keys are color coded. And of course, there are a bunch of them all staged in a row. And of course, if one player runs into a key that doesn’t match their color, they all disappear. Nor have I brought up how in later levels, switches and levers are brought into play. Joggernauts just loves providing the player with new ways to fail.

There is no doubt that Joggernauts is the most difficult co-op game I’ve ever played. This is a game that will bind people together in triumph and rip them apart in despair and bitter accusations. I am going on the record right now to say that Joggernauts will be responsible for breakups and divorces. The cheerful, smiling characters bely an insidious dark difficulty that lies in wait beneath the surface, daring you to throw your controller at the wall. There is great pleasure to be had in this pain, but make no mistake, Joggernauts hurts.

Joggernauts presents a smiling face to the world, bouncing happily in place and waiting for someone to love it. But before long, it rips its mask off and reveals that it is, in fact, a ludicrously difficult game. It all starts with “Ooh” and “Ahh” and “Oh, that’s cute”, but later there’s running and screaming. Groups of friends that love games will have a riot savaging each other over their performance. With a fun and accessible veneer, Joggernauts is ready to break the world.