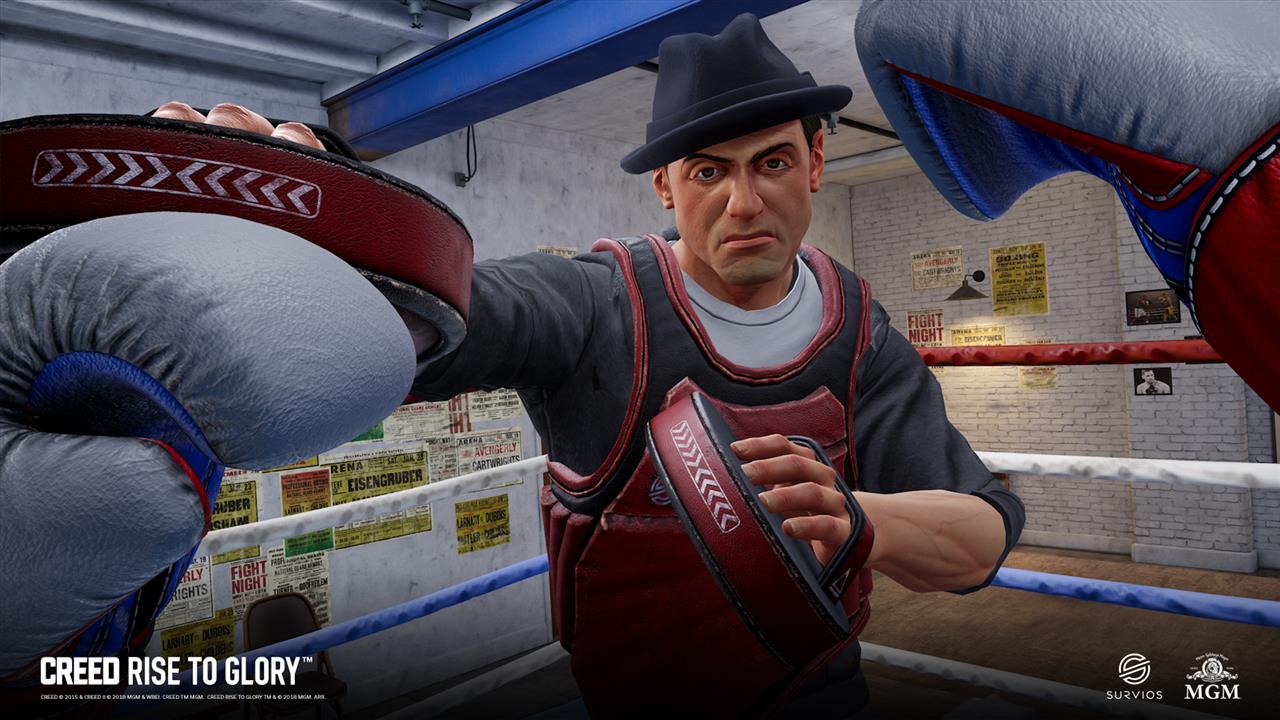 I’m standing in a boxing ring in Tijuana Mexico, struggling to catch my breath. My arms are on fire, and I can feel every muscle in my back popping, screaming for oxygen. I throw my arms back to crack my spine and turn to face the crowd. I throw my hands up in the air, egging them on in their excitement, and they roar in response.

I turn to face my opponent. I can hear his breath rattling in his chest, and it is clear that he is as fatigued as I am, maybe more. His posture is erect and strong, but the bruises on his face and torso betray the damage that I’ve done to him over the last several minutes of combat. I wonder how I must look to him. If he knew how tired I was, his confidence would skyrocket, so I stand strong and straight, looking him in the eye from across the ring.

“Oh my God, dude,” he responds in between heaving breaths, “these just aren’t the sort of video games I’m used to playing.” 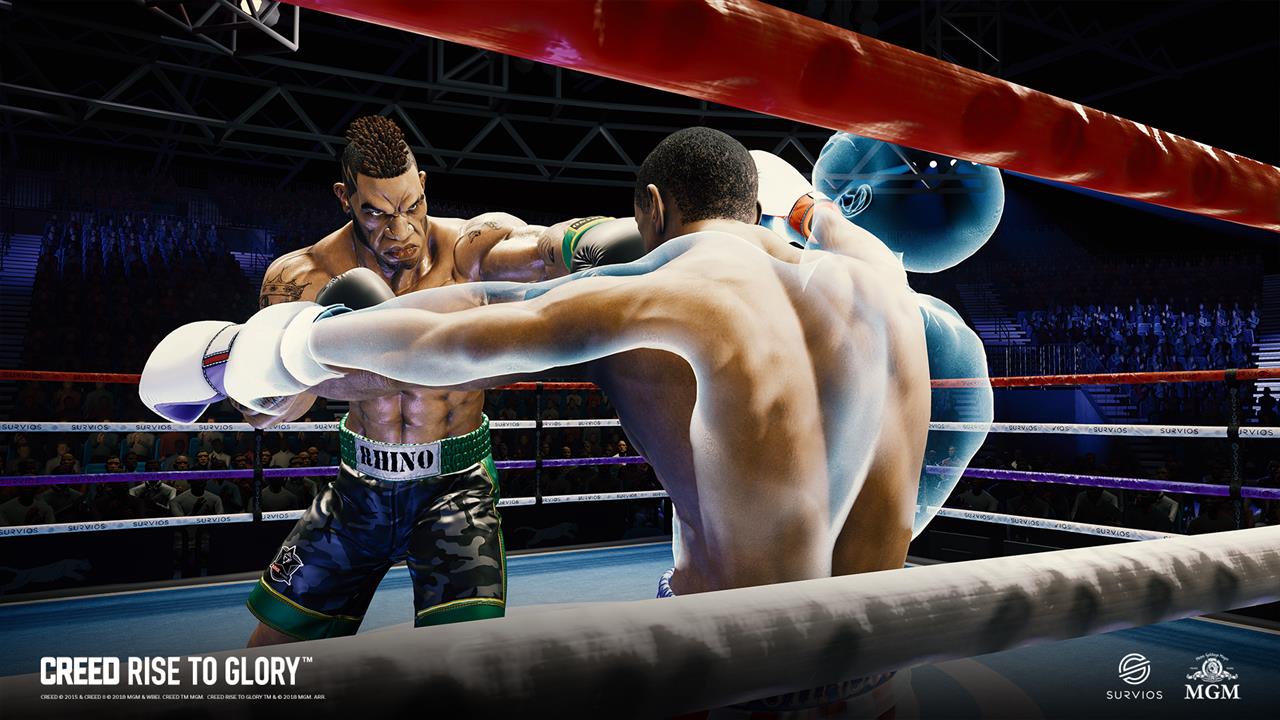 The bell rings. We both rush out of our corners, and begin doing our best to kill each other with our fists. I land a quick series of blows to his face, leading with my right and following up with my much more powerful left. But after a few moments of exciting dominance, I overextend, and my opponent capitalizes on the opportunity, delivering a vicious right cross. I never see it coming, and I go down in a heap on the mat.

Already exhausted, I realize that I might not be able to make it back to my feet. “I don’t know, man, I think you got me,” I say.

This is Creed: Rise to Glory, and it is changing my very concept of what video games can be. 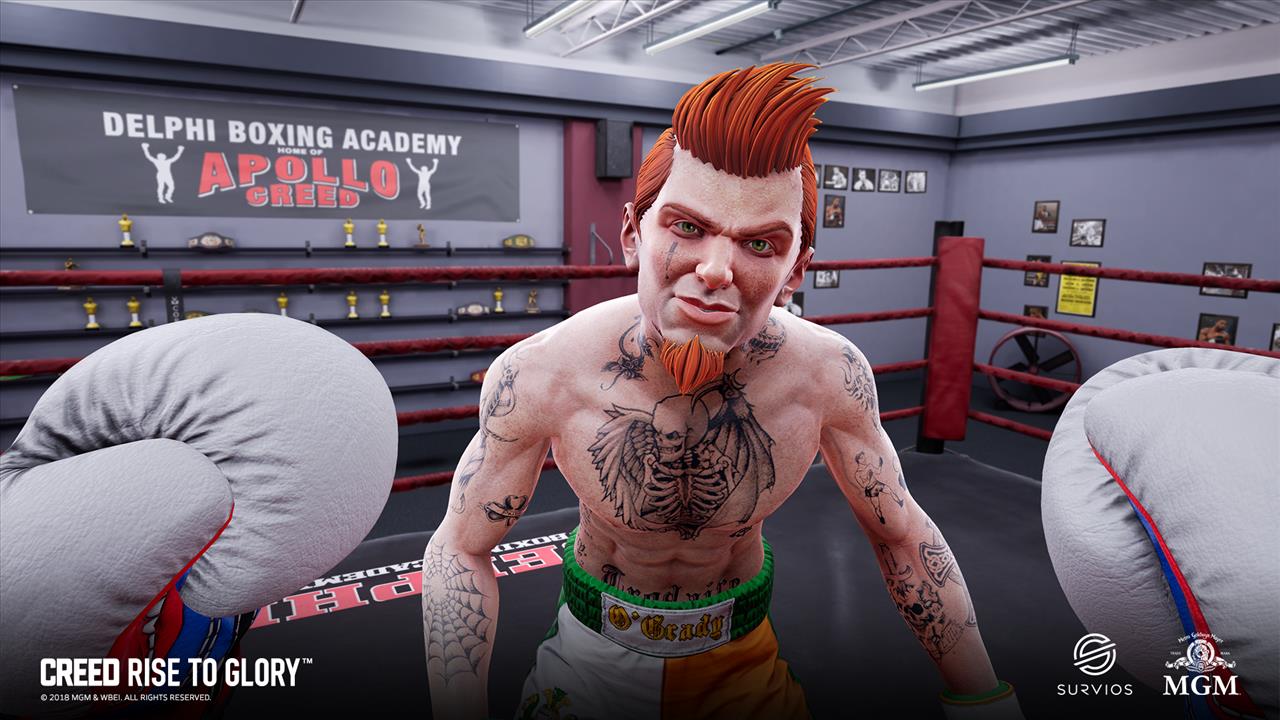 While there have been PlayStation VR games that have made me sore before (I’m looking at you, Blasters of the Universe), Creed is the first game that has actually lit me up to the point that I’ve had trouble getting out of bed the next morning. The day after playing Creed for the first time, I became aware of muscles in my back and neck that I didn’t even know existed. And still, when my son asked me to try the game out that night, I eagerly pulled the headset back on to demonstrate, and didn’t stop until I needed a shower. Playing Creed is a workout, and for the first time in my life, it makes me feel like playing a game is actually good for me.

That’s not to mention the psychological benefits. It feels amazing to an older guy like me to step into a ring and just unload a day’s worth of stress and angst into some dude’s face. I’m not a violent guy (at all), but I have been in enough involuntary fights in my youth to not be intimidated when faced with a larger opponent, and to understand the pleasures of kicking the crap out of someone that has underestimated me and forced me into a corner. Perhaps I’m going too deep here, but all I’m saying is that getting into the ring with an intimidating opponent and punching them in the face is fun. And liberating. And damn it, it just feels good in a caveman sort of way. 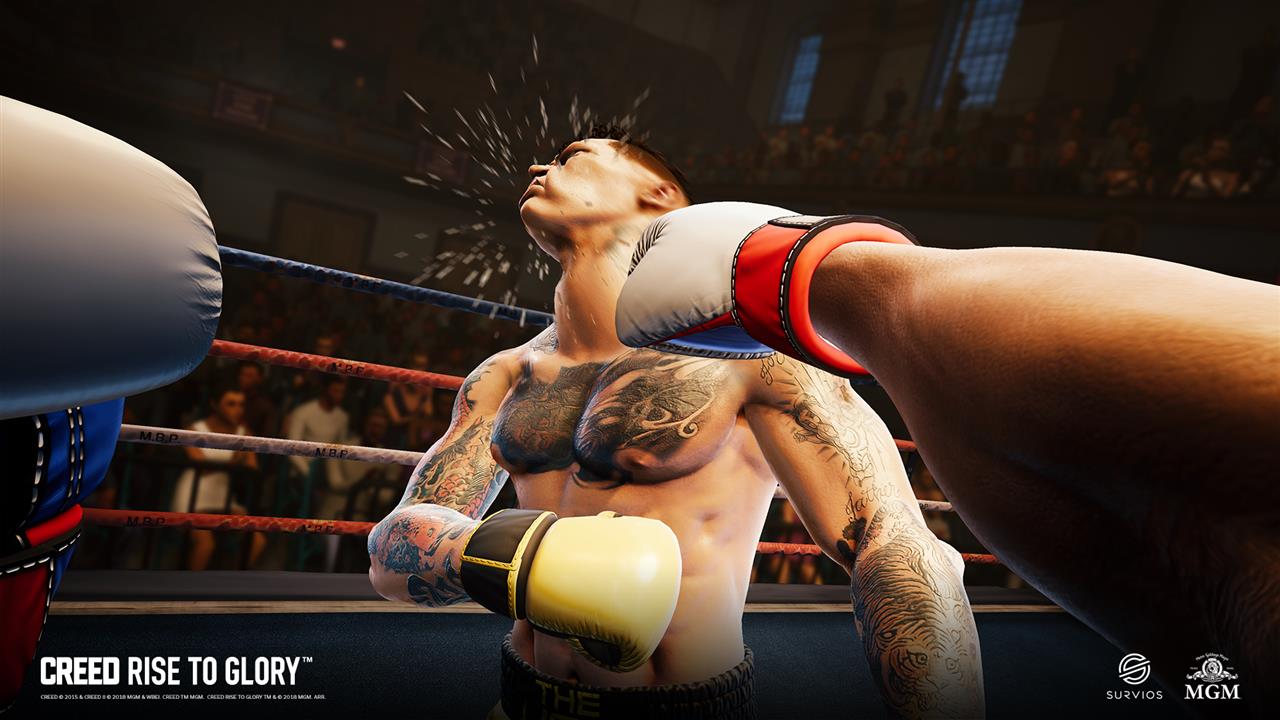 Creed gives players a number of ways to indulge this dinosaur-clubbing instinct. There is the Career Mode, a series of training activities and fights that (very) loosely follows the plot of the first Creed film. Career mode is not overly long (maybe 90 minutes to two hours), but for sheer showmanship and fun, it can’t be beat. When you are fighting a guy that seems to be twice your size, and things aren’t going well, and that soaring Rocky theme kicks in, you can feel the blood swell in your body and something clicks in your brain to unleash your second wind. The effect is astounding. My wife laughed at me at one point because I actually punched my hands together and roared at my opponent. The game creates these moments in clever and convincing ways, and it is easy to feel like a boxing superhero after surging back from behind to win a match. 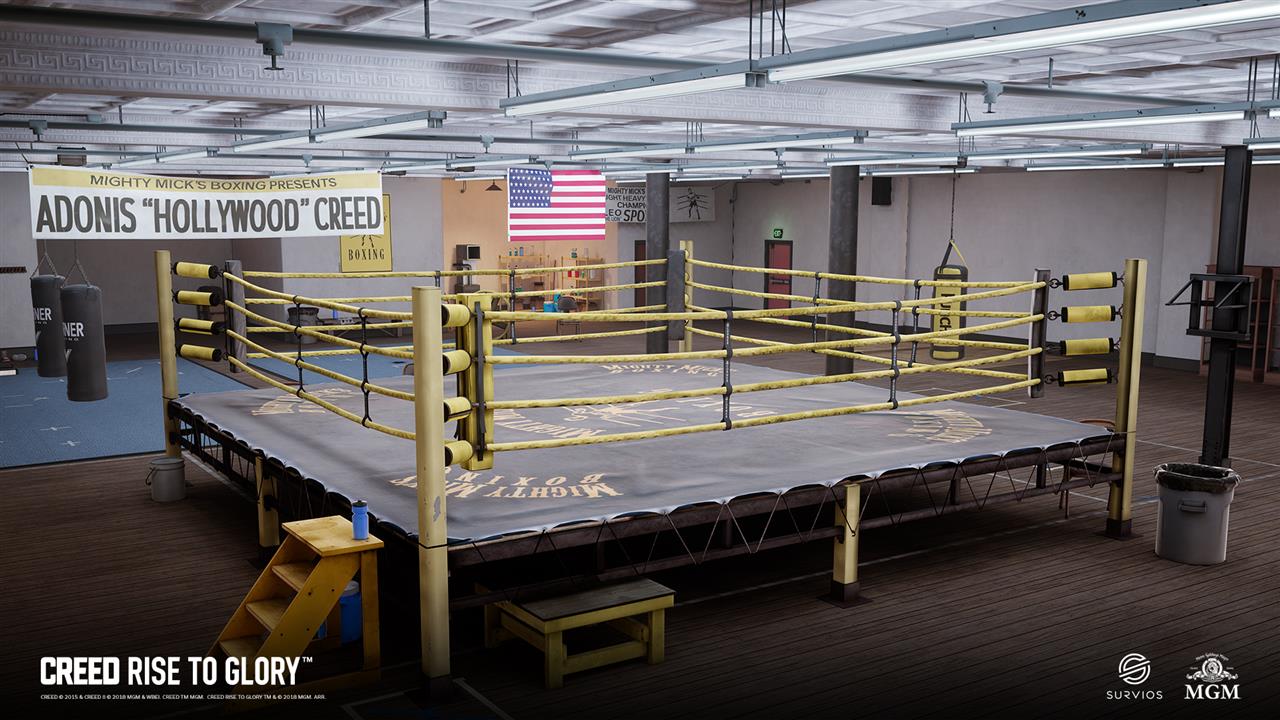 For those that just want to experience the story, there is a rookie difficulty setting, but I suspect that after beating it most players will want to ramp up the difficulty. The more challenging fights are more fun, and the feeling of satisfaction in beating them is fantastic.

Creed also offers a Quick Match mode, allowing players to select from the game’s stable of opponents and fight them in any of the finely rendered environments from Career Mode. This mode is a great way to practice against opponents before taking them on during a higher difficulty run at the campaign. There is also a special treat hidden in this menu, which allows players to take on the Italian Stallion himself. A word of advice: don’t try to fight Rocky when you are tired.

And then of course there is the PVP. Much like the recent Firewall: Zero Hour, people are actually playing this game. I was able to get into matches in a matter of moments, and the opponents I found were generally very friendly and happy to be playing. For a game this visceral, I was surprised to find that smack talk was kept a level of friendly banter, and no one was acting too crazy. I’m not saying that there aren’t lunatics out there playing Creed, I’m just saying that I haven’t run into any. 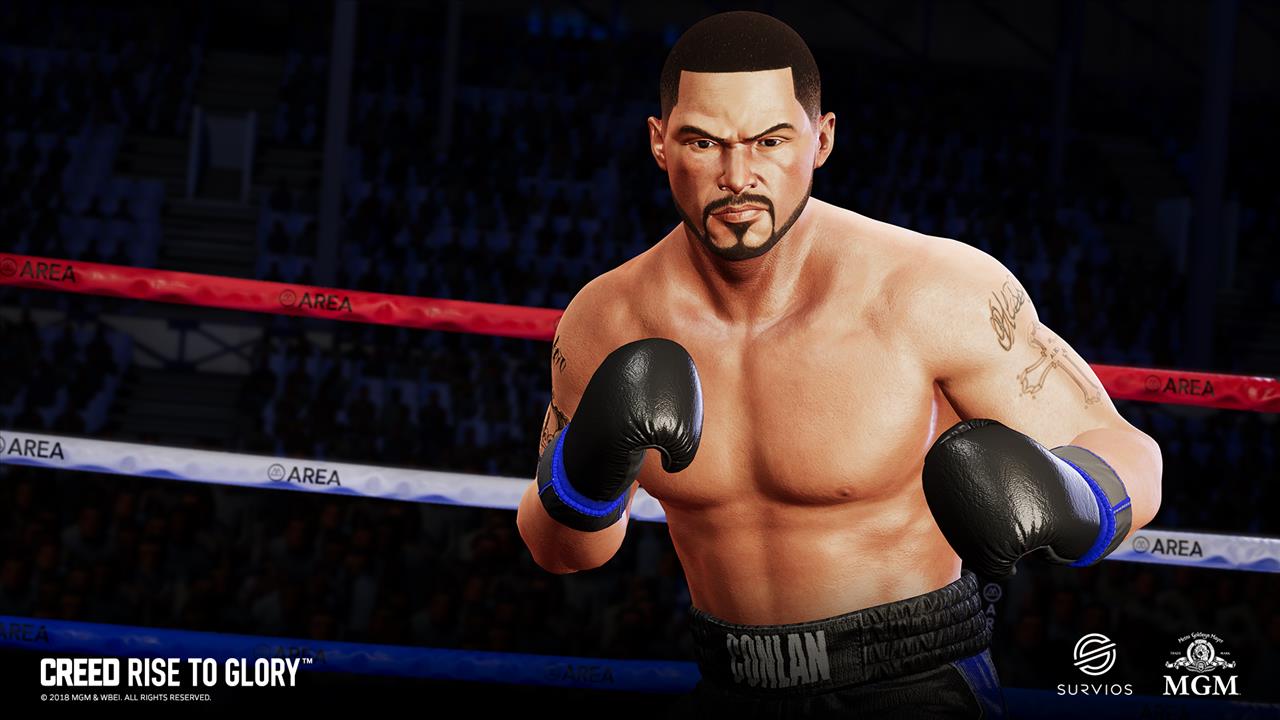 PVP is pretty bare bones right now, but that doesn’t make it any less fun. There is no real progression in place, so no unlockable fighters or skins. But while I know that it motivates a segment of the gaming public, that cosmetic stuff never captures my interest very much. What does toot my horn is the ability to get into the ring against a real person, not relying on AI to fight back against me. And in that, Creed greatly succeeds. Sure, the animations get a little jank while they try to keep up with the gyrations of a real person, and the hit detection might be a little off (let's call it an eight out of ten). But nonetheless, getting into the ring with another real person brings a visceral fear and excitement that I’ve simply never experienced before in gaming. The unpredictability of a human opponent elevates the whole game into something that the AI (as fun as it is) simply can’t deliver.

In addition to fights, there are a ton of training minigames, each with their own leaderboards. While it isn’t a must that you engage with these activities (though the campaign does run you through the paces a few times), it is well worth the time. The investment you put into these side games actually pays off once you get in the ring, teaching your body how hard and fast you have to punch when you are facing an opponent. You literally develop muscle memory if you spend enough time in these trainings, and if you are paying attention, you can feel your body responding in actual fights. This is the first time I have ever had a game cross the line between “tutorial” and actual “training”, which is a remarkable achievement.

As I wrote in a recent news post, Creed: Rise to Glory seems ripe for some DLC content. I’m hoping that Servios have another campaign up their sleeves to go along with the new film. I would also happily toss them a few bucks to have the chance to get in the ring with Mr. T’s Clubber Lang or Dolph Lundgren’s Ivan Drago. It would also be nice to have an older Rocky skin, and who wouldn’t want to participate in a fantasy fight between Apollo and Adonis Creed with both men in their primes? While Creed is a complete game, and well worth your time, it also feels like there is room for this platform to send out its tendrils into earlier franchise entries.

To me, the true magic of the Rocky movies is that they can take a topic that I have almost zero interest in – boxing – and embed an emotional human story within that framework. I have always found myself swept up in the moment with these films, and when watched from beginning to end, they never fail to thrill me. Maybe the extreme pleasure I got while playing Creed is just run-off from my lifelong engagement with the film series, but I don’t think so. Even without the Creed/Rocky connection, this is an extremely well-made and fun game. But if you take this solid gameplay, and you throw in Mick’s gym, and that amazing soundtrack, and all the other trimmings of the franchise, you have the recipe for magic. And like the characters from the films, I’m willing to sacrifice my body to be part of the moment.

By taking a fun and exhilarating boxing framework and painting it with the glorious trappings of the Creed/Rocky franchise, Servios has delivered a game that is simply magical. Sure, the campaign is a little short and the hit detection might feel a bit wonky, but in the heat of the moment none of that matters. Whether fighting AI opponents or engaging in the more challenging fights against real-life players, you will find yourself bouncing in place, floating and stinging with the best of them. This is a game that will leave you sweaty and proud. How many other games can say that?