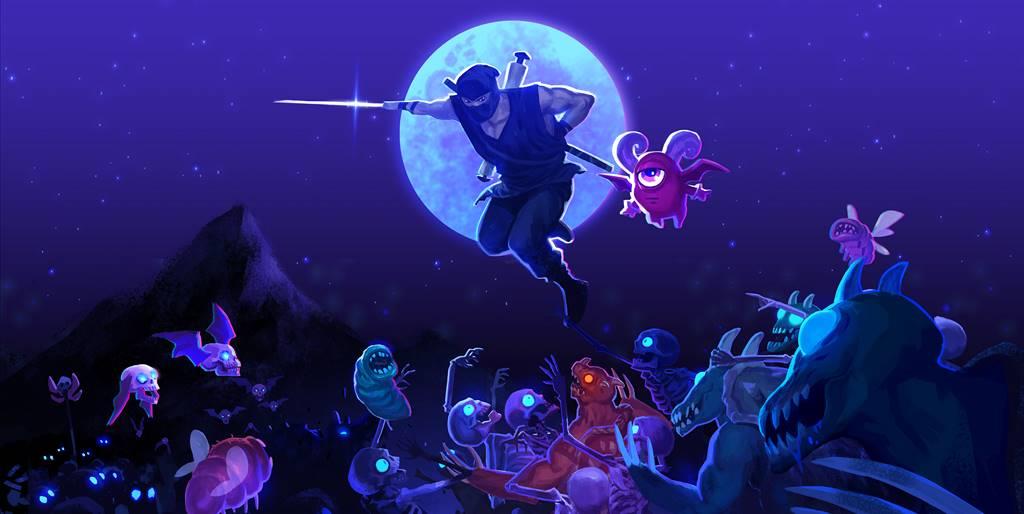 The Messenger is a special game. And I don’t mean in the self-important way, the “Very Special Episode after school special” kind of way. The Messenger doesn’t purport to push any kind of message or cause. It doesn’t shove its political opinions in your face or condescend. At very surface level, The Messenger appears to be yet another thinly-veiled, pixel-art platformer masquerading as 8-bit nostalgia. But as you spend time with The Messenger it unwinds a labyrinthine web of interconnected game design, wry, biting humor and a masterful story. Like Undertale it’s a game about video games but it’s far less heavy-handed and far more cleverly sarcastic about how it gets its many points across. The tricky part is that it’s hard for me to review The Messenger without utterly spoiling all of its brilliant plot and gameplay twists. But I’m going to try my best.

The Messenger begins ostensibly as a fairly unimaginative but earnest and competently-constructed Ninja Gaiden tribute. You play as a somewhat lazy, chronically-late young ninja, who is training with several other young warriors to protect their village from the Demon King. Prophecy speaks of a mystical “Western Hero” who will appear at the right time to help the ninjas defeat the Demon King for good. On a morning like any other, with our young ninja late for class yet again, the Demon King invades and catches the village by surprise. The Western Hero appears, but simply hands the young ninja a scroll and commands him to deliver it to the top of a nearby mountain. This will supposedly stop the Demon King.

The first level plays a lot like a Ninja Gaiden clone as well, albeit with a much smoother difficulty curve. The Messenger takes the Miyamoto approach and plays like an elementary school class. It teaches you basic techniques like the Cloud Step—strike an enemy or object mid-air to gain a second jump—and then incentivizes you to practice that technique early on until you’ve mastered it. It tests all of the skills you’ve learned at the end of a level with a boss or platforming challenge. Pretty rudimentary game design so far, but by the second level I had the suspicion that this game was a lot more than it was letting on. 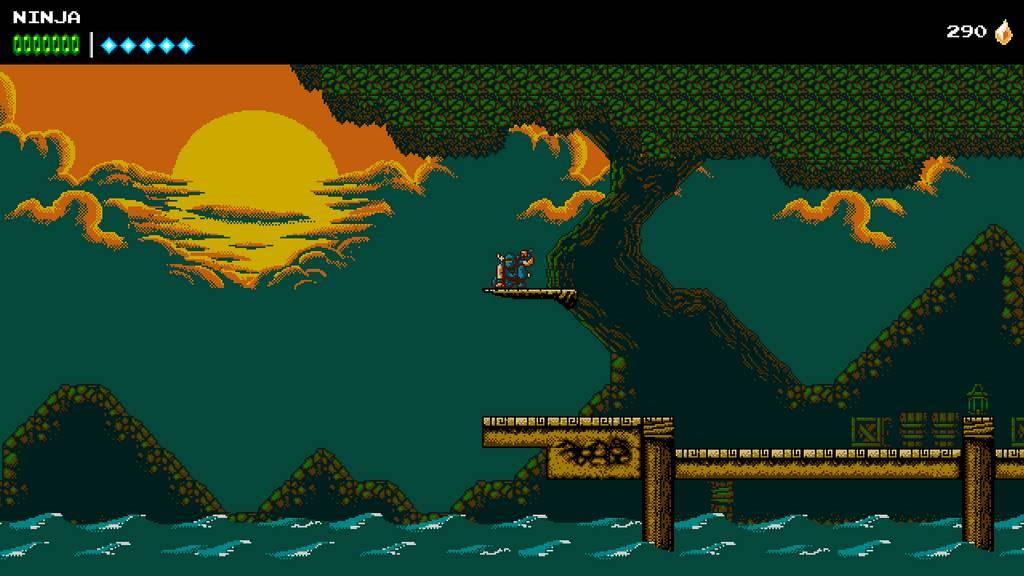 Throughout the first level you hear about how you’re headed to the Forlorn Temple next, and how you should really get ready for all the tough challenges and traps the Demon King has in store in the temple. After you beat the first boss you venture out into the forest with a typical NES-style level transition, announcing that you have entered the Forlorn Temple. Right as you’re about to jump into the temple, the ground gives way and you plummet down into the Catacombs, complete with a hasty level transition screen that even shows you falling down through a pit. Bait-and-switch transitions like this are nothing new, but The Messenger is the best example of this mechanic since the original Prince of Persia Sands of Time. It’s almost like the game made a mistake, it knows it made a mistake and is frantically trying to cover for it. This “freeze-frame, record scratch” moment had me and my wife rolling with laughter the first time we saw it and it indicates just what the rest of the game has in store.

The game’s upgrade mechanic is also tongue-in-cheek but also surprisingly smart. You can access an interdimensional upgrade shop at checkpoint saves and buy new abilities with the time shards—the game’s ubiquitous collectible--you’ve gathered along the way. The sardonic hooded shopkeeper seems like he’s been there a long time, and he’s particularly long winded; when my ninja commented about the size of his text boxes, I groaned inwardly. “Great,” I thought, “here’s another game trying to awkwardly break the fourth wall. Like I haven’t seen that before.” But as you keep playing, the shopkeeper’s self-referential humor gets much sharper and his stories are actually quite funny; I’ve never found myself digging into flavor text like this before unless I really liked the game (ahem, Deus Ex). 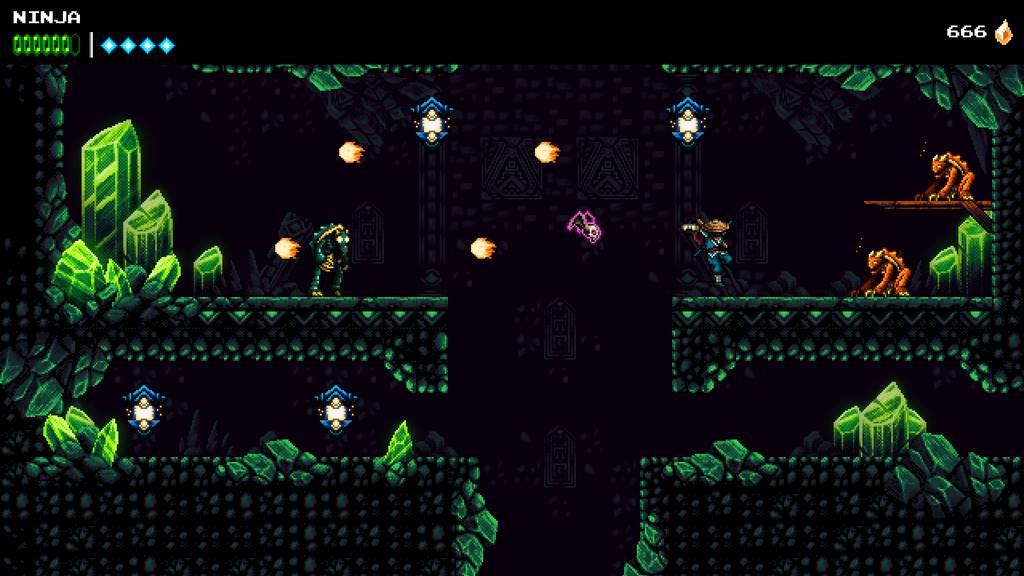 Several of the upgrades seem like helpful but somewhat superfluous bonuses at first; just the thing you’d expect from an 8-bit tribute game’s ham-fisted attempt to cram an obligatory modern game mechanic into a retro format where it really has no business being there. After all, the Cloud-Step is easy to pull off and you get by just fine with it. But as you keep playing you discover that you can combine the various upgrades like the wingsuit, down-slash, rope-dart and climbing claws with the Cloud-Step to pull off some impressive aerial maneuvers. The game also has cleverly-constructed rooms with just-out-of-reach bonuses that encourage you to learn each upgrade’s subtleties. This way, you have organically mastered many of the game’s advanced movement techniques by the halfway mark.

This goes hand-in-hand with how The Messenger handles death. You’re going to die in this game, a lot, but it never feels like a particularly crushing failure. When you run out of health or fall to your death, an annoying demon named Quarble will save you at the last minute and return you to the nearest checkpoint, but he charges a fee. Quarble will float nearby, snapping up any new time shards you collect until he has balanced the ledger or he “gets bored.” Since checkpoints are frequent you really aren’t punished too badly for dying, and since Quarble only takes the money you collect after you die instead of taking a chunk out of your accumulated funds, this keeps you from amassing a vast balance-breaking fortune. This game isn’t Meat Boy or I Wanna Be The Guy; it isn’t controller-snapping hard just for the sake of being difficult. Rather, it challenges you to develop skill with the upgrades you’ve already earned so that they feel more worthwhile. 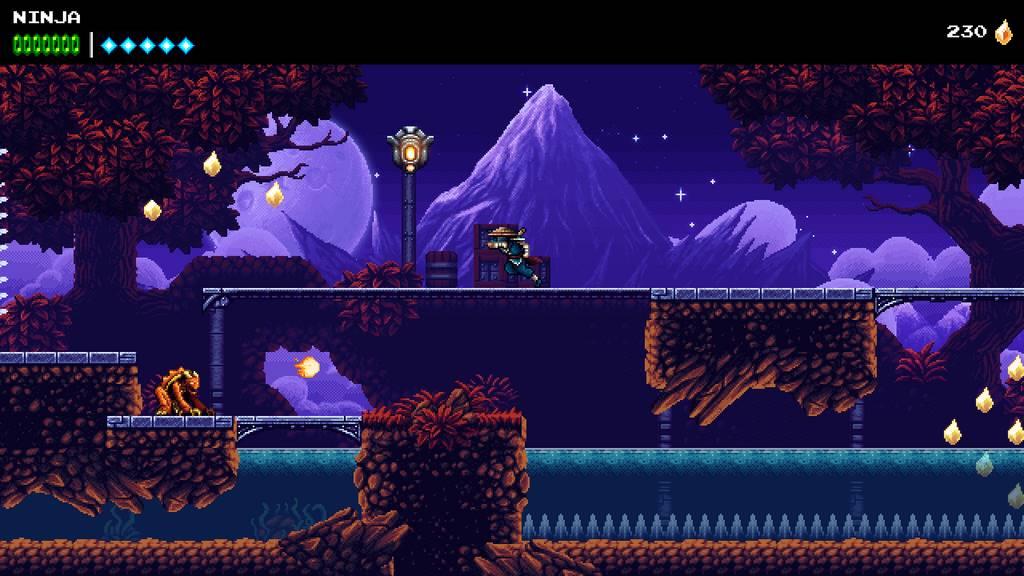 And…now comes the part in the review where I try to describe the rest of the game without horribly spoiling it. Without getting too specific, The Messenger’s main gameplay conceit hinges on time travel, and the way the game portrays this is genius. The game starts with an 8-bit color palette and sound font, but once you gain the ability to travel into the future, this “future” is portrayed with a 16-bit aesthetic. Later in the game you can travel back and forth at will through time portals and the transition is handled beautifully; the colors get richer, the music fleshes out and the whole thing feels seamless and somehow nostalgic. This mechanic also works in some particularly clever puzzles, as you revisit previous areas in a different time period, and then again both within the same screen as you pass back and forth between past and present with a time portal.

As the gameplay deepens with this mechanic, so does the story. The Messenger doesn’t just throw several incredibly clever twists at you, but also plays with the clichés of retro gaming in some surprising ways. The way it handles a couple bosses had my jaw on the floor, and the humor gets some well-deserved digs in at game writing conventions. Nothing is wasted here; characters will make apparent throwaway jokes and comments that take on deeper meaning when you least expect it. Some of it is funny, some of it is poignant, but in any case you will need a healthy sense of irony and the ability to laugh at yourself to get the most out of this game. The Messenger seems to want to say “hey, isn’t it weird that this is always how we’ve done things?” but it doesn’t bludgeon you with the subverted expectations and guilty feelings the way Undertale does. People who take themselves and video games as an art form too seriously probably won’t enjoy The Messenger, but if you like nuance in your humor, this is the game for you.

It's difficult to expound more, and believe me I could extoll this game for days, but suffice to say The Messenger is going to become one of those cult hit indie games that just about everyone loves. If you’ve been playing video games for a long time like I have, you’ll appreciate this game’s smartly written perspective on the medium. Mechanically it’s also one of the best fusions of not just disparate art styles, but also entire genres of gameplay…and that’s all I’m going to say on that. All I can do is whole-heartedly recommend The Messenger. It’s a breathtakingly clever example of both game design and game writing, and Switch owners should feel lucky that for the moment, they have it console-exclusive on Nintendo’s hardware. Steam users might be able to enjoy The Messenger, but if you have a Switch, you can take this game wherever you go.

Packed with clever story surprises and dynamic, richly-constructed gameplay, The Messenger is both a tribute to and affectionate pastiche of 8 and 16-bit game design, storytelling and nostalgia. It belongs in every Switch owner’s eShop library.