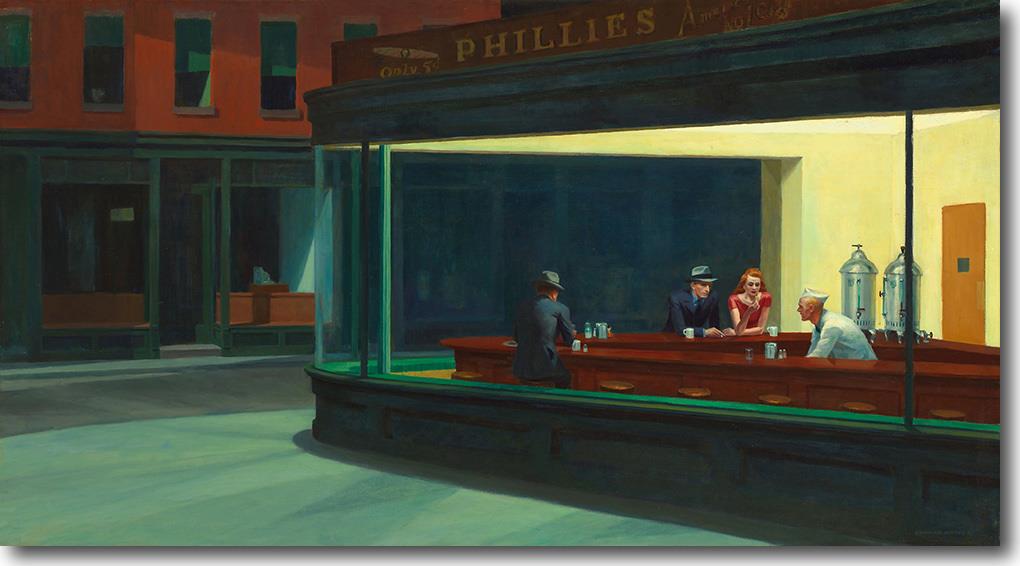 The makers of the adventure title Earthworms, newly released on Switch, have stated that one of their primary inspirations for the game was the art work of 20th century realist painter Edward Hopper. If you aren’t familiar with Hopper, you might find some of his cityscapes familiar. I remember seeing some of his works at the Toledo Museum of Art as a kid, and they always struck me as sort of melancholy.

However, it wasn’t until I took a look at some of Hopper’s more pastoral works that I really started seeing the influence as it manifests in Earthworms. The stark scenes of barren villages and abandoned buildings in Earthworms are very reminiscent of Hopper’s style. 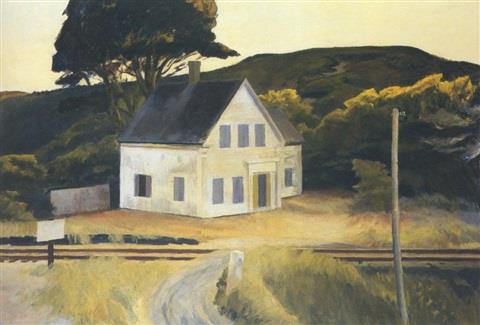 But in addition my understanding of the influence of Hopper, the entire time I was playing Earthworms, there was a nagging feeling in the back of my mind that it was reminding me of something else. There was a mood to the game, a creeping oddness tickling my brain that I could not quite place. Only after receiving the negative ending (and allowing aliens to destroy all vegetation on Earth) did it hit me. Earthworms reminds me of the early ‘70s nightmare-fuel animated film Fantastic Planet.

I quickly fired up the above trailer and was immediately reassured that I was 100% on point with my realization. Even the musical cue at the 1:32 mark is remarkably close to one of the main musical themes in Earthworms. If the development team at All Those Moments weren’t aware that they were channeling one of the strangest films of the 1970s, then perhaps some earthworm-shaped tentacles have crept into their minds and altered their thoughts.

So, yes, Earthworms has a particular look and feel to it. To call it stylized would not be doing justice to the off-kilter strangeness of this game. Earthworms begins oddly, takes some strange turns, then goes barreling down the chute into bizarre-o territory. I kind of loved it, even as it creeped my out with its uncanny stillness.

Iif you are looking for a detailed, nuanced story, this is not the place to look. And if you are seeking scintillating gameplay, you might want to seek elsewhere. But Earthworms has mood and presence in spades, from its tinkling, pulsing soundtrack to its meandering, yoga-loving main character.

Earthworms begins in the office of detective Daniel White, who is visited in his place of work by a man dressed as a tree. The tree-man requests that Daniel White come to visit a nearby island, where a young woman named Lydia has gone missing. Completely nonplussed by the fact that this guy is dressed as a tree, White complies, and soon he is wandering the pastoral (nearly abandoned) island looking for clues. 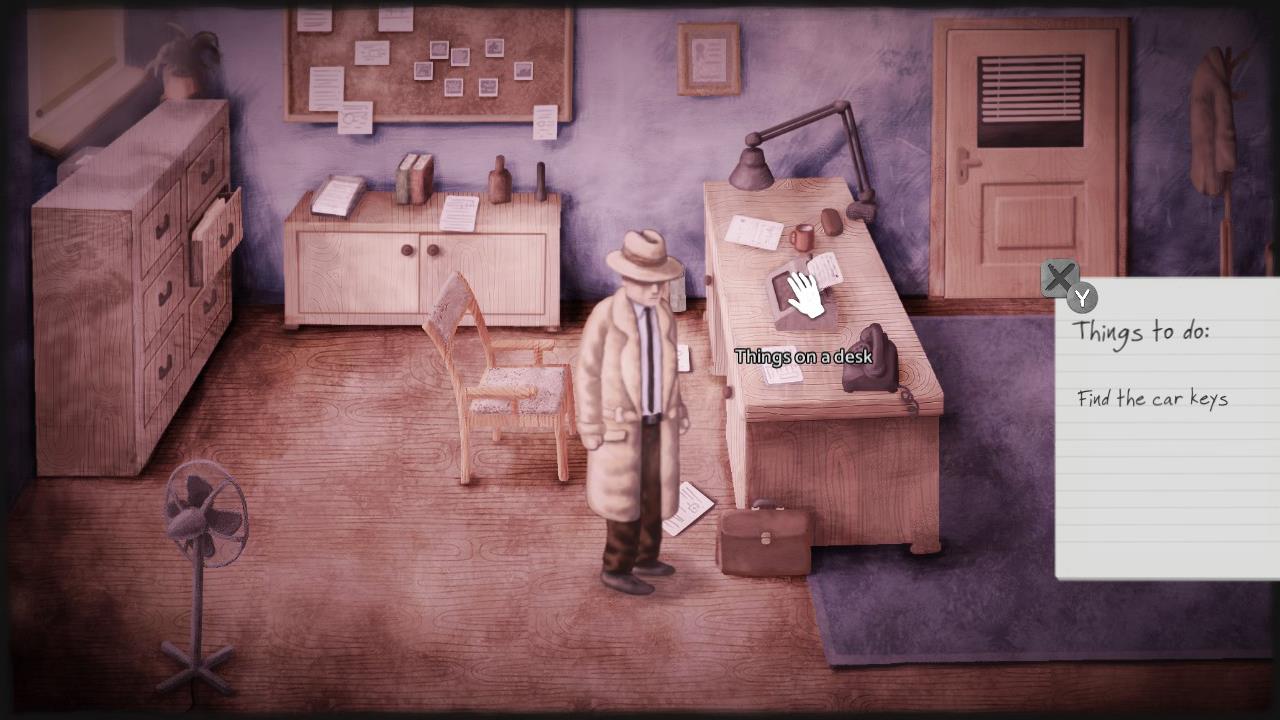 White quickly discovers that things have gone uncannily awry on the island, with large earthworms growing among the vegetation in the main village and the nearby forest. The few people on the island are behaving strangely, and everyone seems a little confused (and not nearly concerned enough about the encroaching tentacle-like earthworms).

Before long, White has discovered a portal that teleports him to another world (dimension? galaxy?), where he continues digging into the case of the missing Lydia and the origins of the earthworms. And this is the point where the game takes a turn from the surreal into the downright weird. Strange elements come into play, with shamen, sentient robots, skull caves, one legged-giants, banjo playing tree dwellers, mustachioed military leaders and more drifting in and out of the dreamlike story. 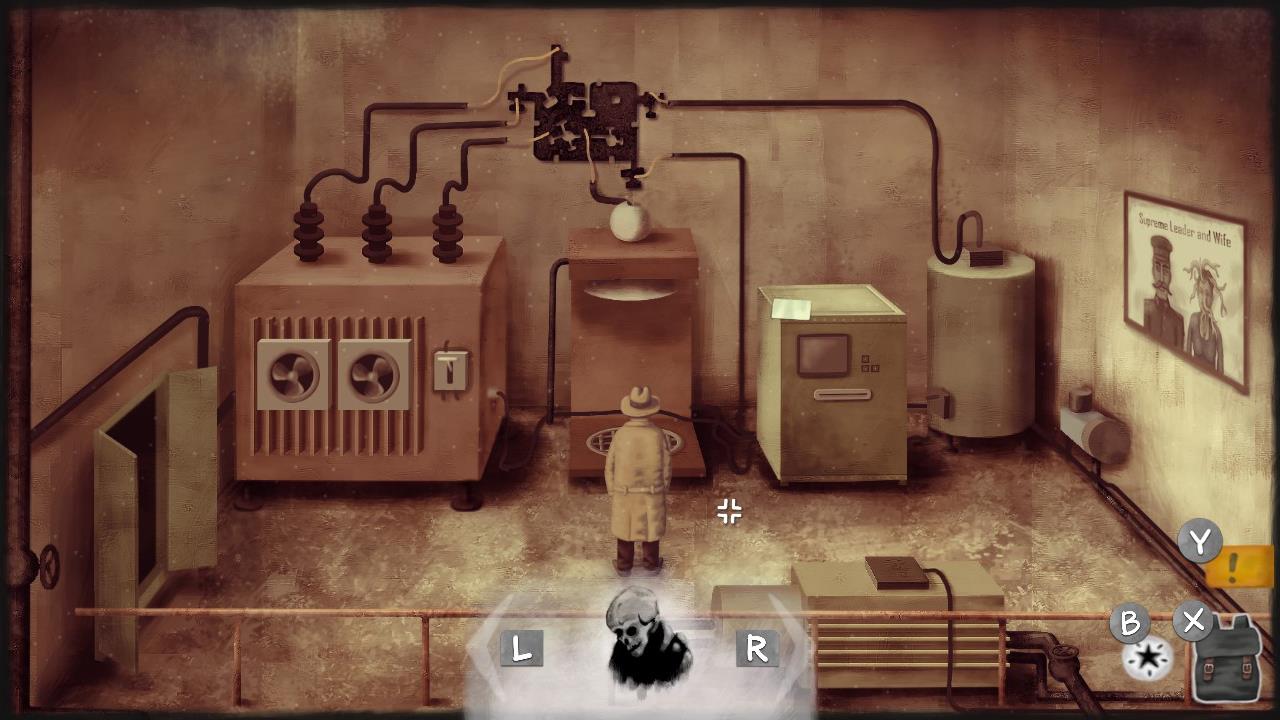 Earthworms is an old school point and click adventure, with controls that have been modernized to the point where the game plays very easily on the Switch. Moving Daniel about is as easy as pointing and clicking where you want him to walk. The cursor has a sticky magnetism that draws it towards interactive objects, easing the need to scour the screen for small objects. Items that can be taken are automatically added to your inventory, which can be opened with a click of a button. Clicking on an item and dragging it to interact with an area of the screen is also easy and intuitive. However, not being a regular adventure game player, knowing what I should be doing next became something of an issue for me.

There are two types of puzzles in Earthworms, which I came to think of as “mechanical” and “environmental”. Mechanical puzzles usually involved some sort of device or interface that Daniel encounters in the world. These generally involve entering a code, pushing buttons and turning knobs. For the most part, this sort of puzzle didn’t give me any problem at all, and I was able to overcome most of them in five minutes or less. The environmental puzzles, on the other hand, had me wandering in circles for hours. These were the sort of puzzles that involved “taking that thing that you found five screens ago, combining it with that other thing you found three screens ago, and giving it to that dude that is standing there silently”. This type of puzzle tends to leave me stumped and wandering in circles. When I have eight objects in my inventory, and twenty objects on screen to interact with, I tend to just wander around trying to slap objects with other objects instead of thinking about what the logical next step would be. And in a game as esoteric and odd as Earthworms, the “logical next step” is often not logical at all, exacerbating my issues. As a result, my playtime in Earthworms was about six hours, but I’m pretty sure that someone more practiced at this sort of thing could probably reach the end in a couple of hours. 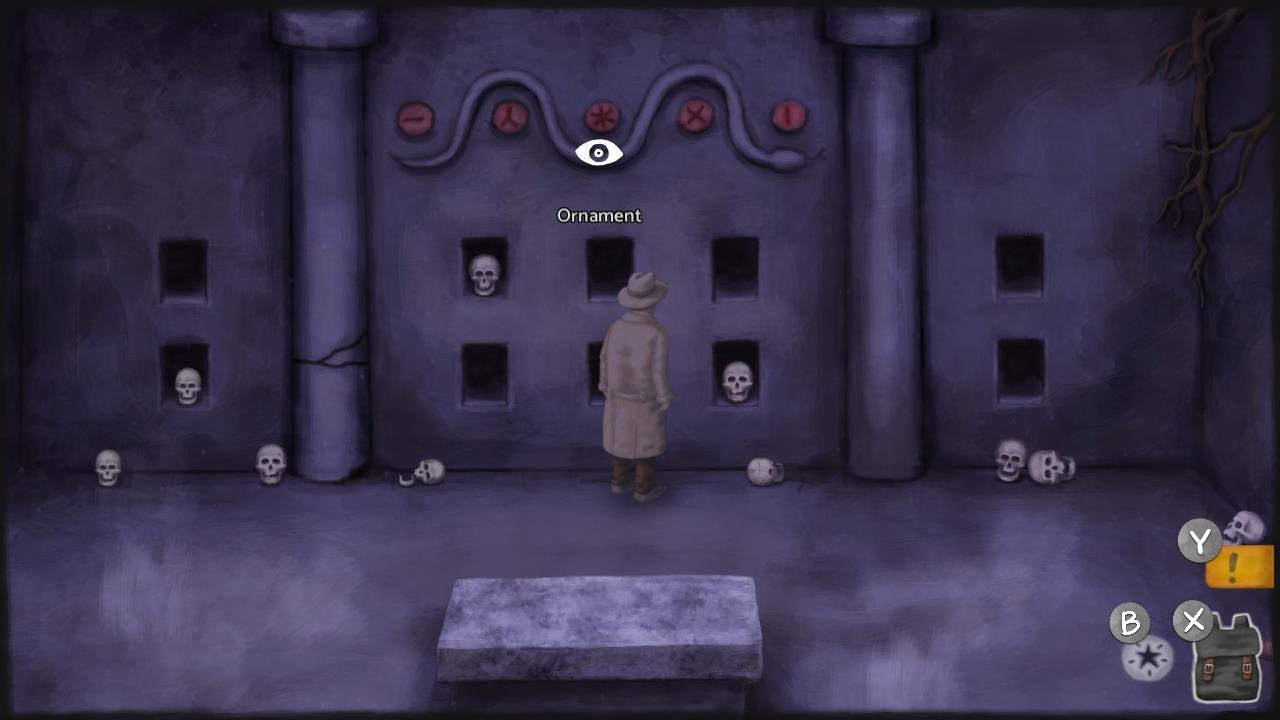 There were a few other elements in the game that didn’t quite pull together for me. One mechanic that had me stumped was the “visions” that Daniel has from time to time when he encounters new things. They manifest in the game as images that appear floating in clouds above certain items. After looking at them for a moment, you can add them to a “vision inventory” for later consultation, but I didn’t really understand what the point was. In the moment, they sometimes offer vague tips for the path forward, but for the most part they just seemed like another element of the general weirdness, not doing much to push the gameplay or narrative forward.

I was also a little stumped at the lack of an autosave system, which just seems to be standard procedure these days. To be fair, the game regularly prompts players to save during load screens, but I’m a dummy. I tend to use the same save file over and over, rewriting the previous save with the new one. For players like me, the ability to backtrack further into the game is eliminated by our own shortsightedness. Not really the game’s fault, I suppose, but I do think that steps could be taken to protect doofuses like me from screwing ourselves. 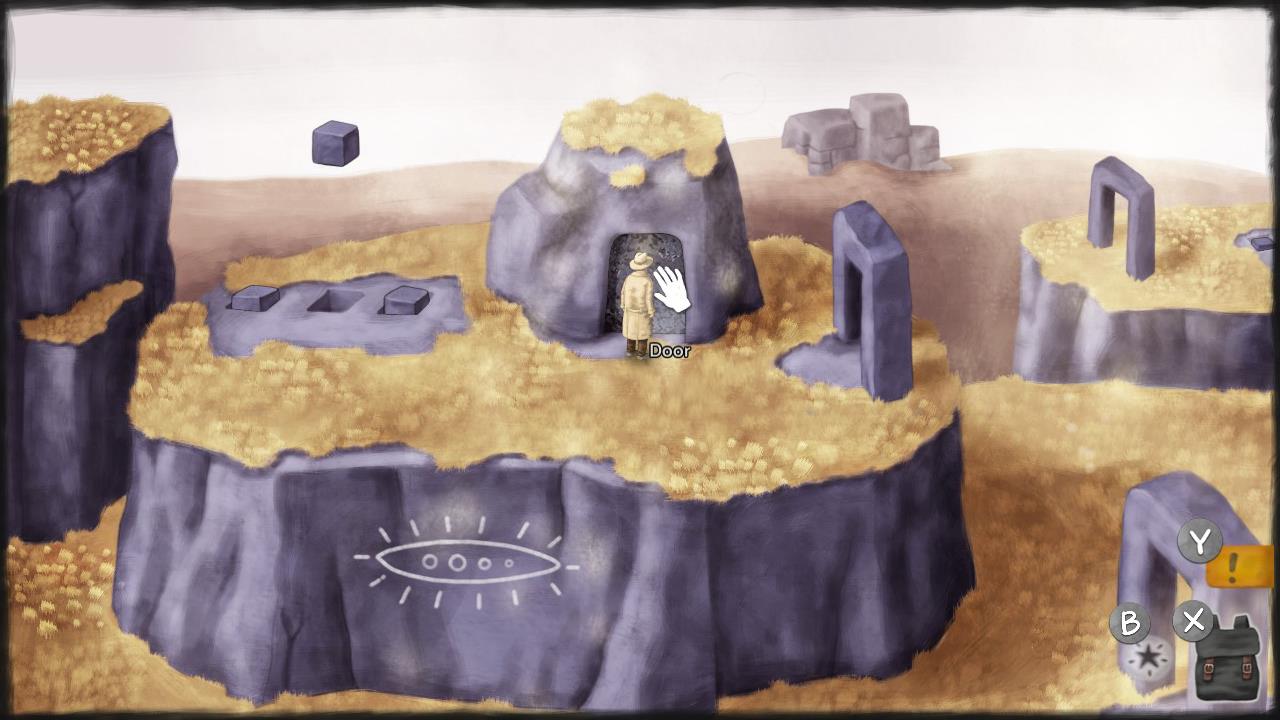 But these issues aside, Earthworms is a solid adventure title that reminded me a lot of games that I used to spend hours on in the ‘90s. Adventure titles are funny. The genre seems to always persist in the background of gaming, with a steady and devoted fanbase keeping it alive. Earthworms is not the sort of groundbreaking title that will break out in the general gaming community’s consciousness. But for fans of the adventure game genre, the strange moodiness of Earthworms makes it a game well worth checking out.

Earthworms is, mechanically, a standard point and click adventure game with decent controls and a quality UI. But it is the general vibe of the game that makes it stand out from the crowd of other adventure titles making their way to the Switch. Non-adventure fans might want to check out the demo, to see if the story’s strangeness resonates with them, but fans of the genre should go ahead and just take the leap. While the unconventional story is meandering and sometimes obtuse, it is also bizarre and unique, making Earthworms an off-kilter game that adventure enthusiasts will probably enjoy.