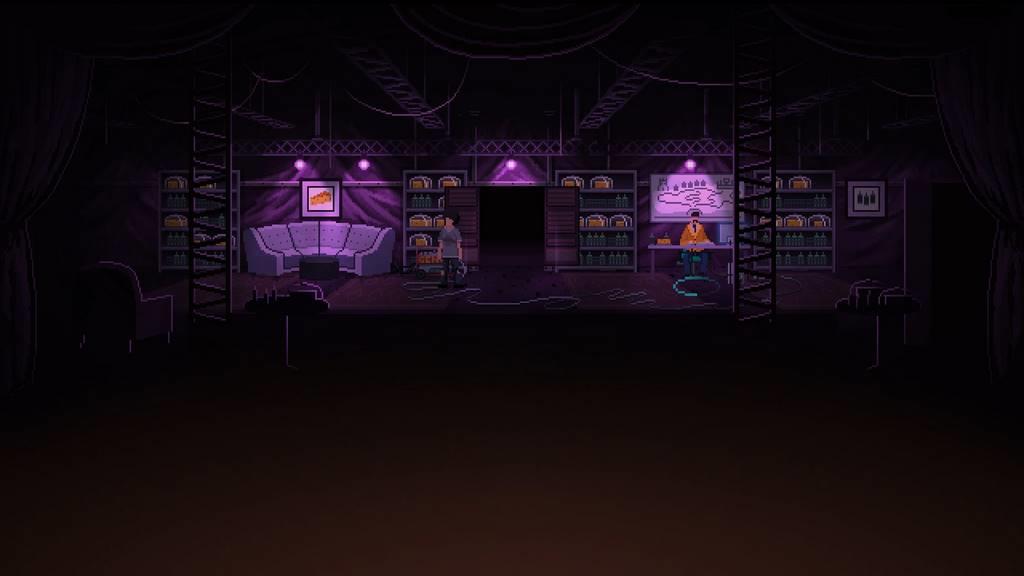 I’ve never really been one for the club scene, but my review of Not Tonight thrust me into the party scene—well, rather, in front of it, because I don’t have enough money to go clubbing. I don’t really have money for anything. I’m a so-called “Euro” in the United Kingdom, and this game throws me into a heavily satirical post-Brexit world where I am constantly threatened with deportation, grossly overcharged for medical bills and unnecessary procedures, forced to uphold prejudiced rules against my “fellow Euros,” and constantly having to scrape the bottom of the barrel to make ends meet.

“But wait,” you say. “I thought you said this was heavily satirical. I know lots of people with those problems today.”

Well, it’s supposed to be. Thing is, while the game hits the nail on the head a lot, it also misses a lot, taking the label “satirical commentary” and slapping it on some situations that are very real for a lot of people. Don’t get me wrong, I enjoyed the game; the recurring characters were endearing (or pleasantly infuriating), the pixel art was gorgeous and telling, and the music—muffled, but swelling to full force whenever the club doors opened—was perfectly captured. However, for what the game is meant to be—social commentary—it could be argued that it isn’t enough.

Let’s break that down quickly, before we dive into the meat of what does make this game work. The game puts you in assigned housing that’s, frankly, dilapidated, and while I was frustrated that my character never picked up her own trash from the ground there was virtually nothing else that she could do about her situation. She worked every day she could, barely spent any money on personal enjoyment, kept her image clean (she could have sold drugs for some extra cash, but chose not to) and still, month after mind-numbingly repetitive month, she found herself barely able to pay rent, and couldn’t make any improvements or advancements in her employment and living situations. 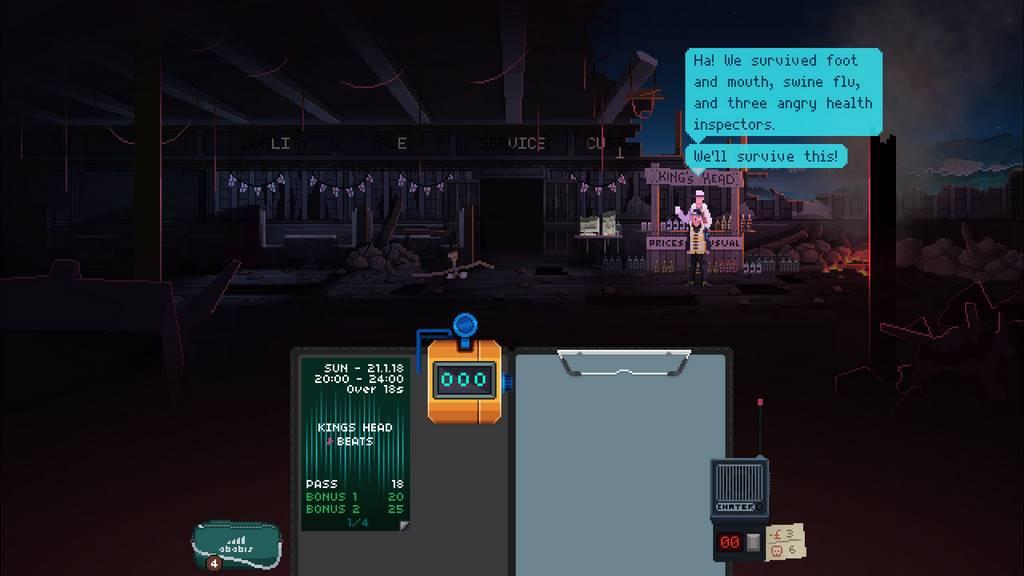 This is not satire. This is real life for millions of people all around the world. For this game to have been fully satirical, it would have to have been so much more. Granted, the revolutionaries sneaking out from behind my toilet while I was in the bath was pretty on par, which I appreciated, but the person obsessively bent on my removal from within the borders is just...normal. I think this game could have had some truly biting, funny, and great satire on the implications of Brexit, but as it stands the satire is more of a reflection than imagination.

That said, there are some aspects of the game that really make it shine; they just don’t have much to do with the commentary. Not Tonight is a management sim a la Papers Please in which you, a bouncer, are given documents (IDs, tickets, passwords, guest lists, et cetera) and get to decide who to let into the various clubs, events, and even borders based on how valid their documents are. If you miss someone, you’re called out. If you miss too many people, you fail. I’m not going to harp on and on about Papers Please, because if you’ve played it you will see the similarities. We all know they’re similar. It’s not super important for anything other than explanatory purposes.

The management and decision aspect of the game, which is its primary mechanic, is solid. The jobs you take as a bouncer aren’t worth much money, but if you successfully work three nights then you become the head bouncer and earn double pay. It’s still not a lot in the grand scheme of things, even if you work every day—and you can absolutely choose to skip work one day, though it doesn’t really do anything other than advance the calendar. The higher the pay, the harder the nights. You can take bribes throughout—but it costs you. Not only does it lower your reputability, but it also gives you a penalty for that night, and you fail if you get too many penalties. So pocket that cash if you really want to let that 17 year-old in, but the owners of the clubs will find out. They always do. There’s a balanced system of give and take going on behind the scenes. 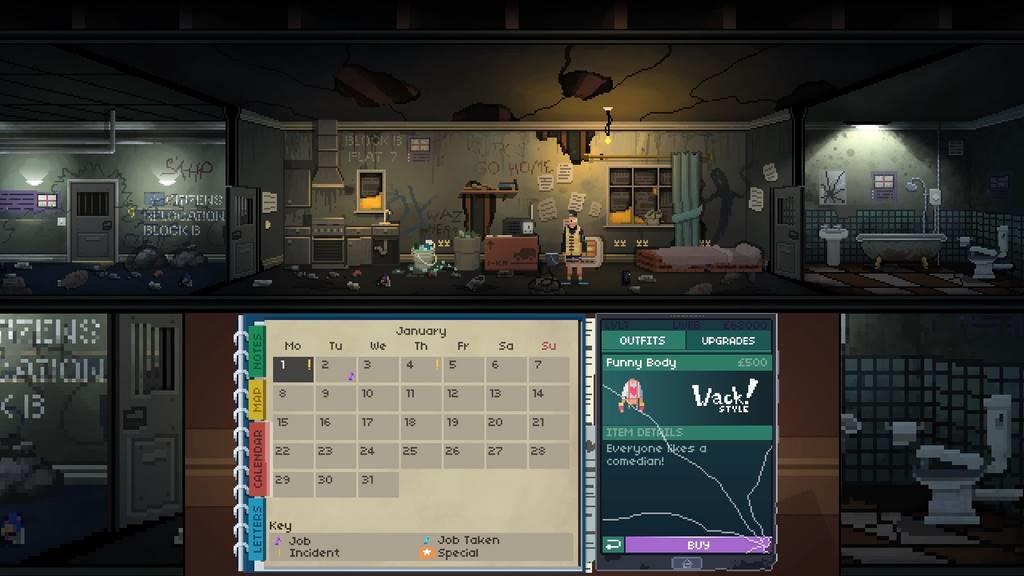 Even though your character rarely moves throughout the course of each level—which is mostly spent looking at the bottom half of your screen, where your clipboard, clicker, and camera feeds are located—it’s pretty easy to find yourself settling into the flow of checking IDs and turning away minors or fakers. Not Tonight has the signature pleasure-in-routine aspect of this kind of management game, supplemented by a good learning curve, and if it’s not incredibly remarkable then at least it’s good. I wish it had been a bit more unique, that they had taken that risk, but at the end of the day they stuck to what they knew would work and ended up with a solid product.

The storyline itself, disregarding my aforementioned gripes with the commentary, had a lot of potential, and I feel like it checked most of my boxes. The characters and their personalities were memorable, whether it was Officer Jupp’s abject hatred of “Euros,” King’s Head Dave’s ditziness, or Shannon’s poor underage attempts at bar-invading. There were also brief news articles that would pop up frequently on my on-screen phone, giving insight into the in-game political and social machinations. I definitely felt more drawn to the individual storylines, with the actual people that would drop by my apartment at various times and introduce little tidbits of information that, gradually over the course of the game, gave me more insight into what the developers wanted this game’s commentary to be. The articles and broader story arcs (especially those concerning Albion First, the primary proponent and enforcer of Brexit policies) weren’t interesting to the same degree, and felt more like background information than something I should really be interested in as the main conflict of the game.

I thought about this for a while, but I feel like I’m comfortable saying that this game’s crown jewel is its environment. It doesn’t include sweeping landscapes in motion, pixels dancing around almost as fluidly as actual movement, but then again it’s not trying to. It succeeds in the details, the nuances of the streets and the backgrounds. It succeeds in the graffiti beside the clubs, in the trash scattered across the sidewalk, in the flickering neon signs, in the color pallets for each location. It succeeds in the music, differing between clubs - muffled when the door is closed, but sharpening when it’s opened to admit a patron. It succeeds in the feeling that it evokes: standing in front of a club, managing the lines, experiencing both the club behind you and the street in front of you.

Not Tonight is a good, solid game. The mechanics are fun, the characters are memorable, and the setting is well executed. However, for its satirical approach, it should have gone a few steps further, and taken the risk in order to become the truly biting, funny, and meaningful social commentary that it wants to be.