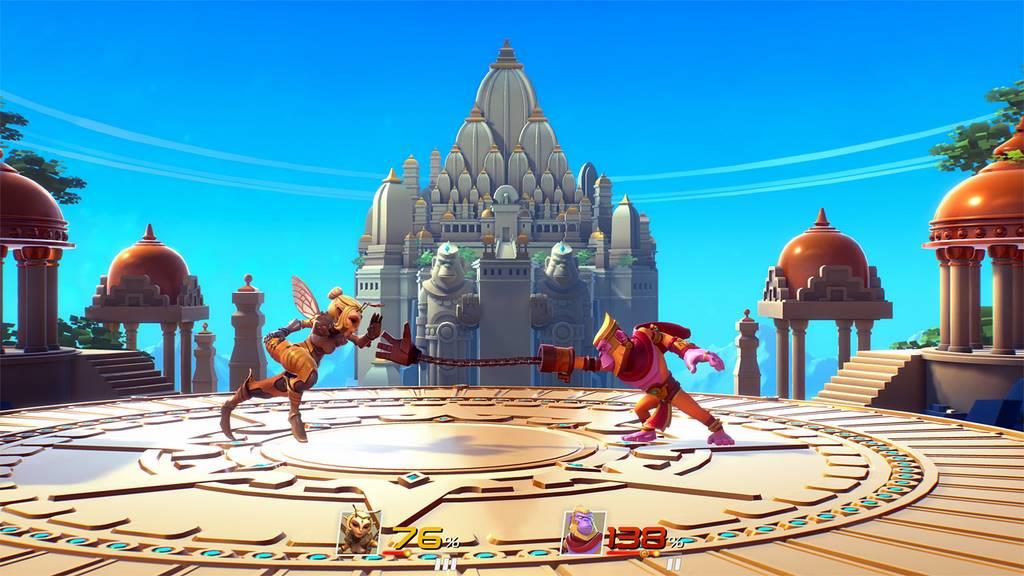 With the success of the Super Smash Bros. series, similar games have popped up over the years including PlayStation All-Stars Battle Royale, Brawlhalla, and others. Then again these kinds of multiplayer games, or at least multiplayer options, have been around before Smash Bros., but its easy to see the influence that Nintendo’s popular franchise has had in recent years. Sometimes the games are pretty darn close to Smash Bros. while others make some changes here and there but still retain the overall concept. Last year saw Brawlout hit Early Access on Steam and see a full release on the Nintendo Switch a few months ago. Just recently, though, the game has come out of Early Access on Steam and also saw a release on the Xbox One and PS4. So today I’m taking a look at Brawlout on Steam.

The mechanics of Brawlout are easy to pick up on but can take some time to master. There is a tutorial mode in the single-player option and you can do beginner and advanced tutorials. If you’ve never played Brawlout before I highly suggest checking out the tutorials. You can use either a keyboard or a controller, but I really don’t want to try and play any fighting game on a keyboard, so I used an Xbox 360 wired controller and the response is perfect; I had absolutely no issues playing on the controller outside of my own skill or lack thereof. Each character can perform basic and special attacks as well as charged attacks by hitting the basic attack button just after moving the analog stick, similar to smash attacks in Smash Bros. You can also use the shoulder or bumper buttons to dodge your opponents, but one thing you’ll find that doesn’t exist in this game is a block button. Brawlout is faster paced than other games of this style and doesn’t give the option to block. I was taken aback by this at first but once you get used to it, you’ll not even think about needing to block.

A player’s HUD will consist of a percentage amount that shows how much damage they’ve taken as well as a rage meter. As with other games of this style, the goal is to knock your opponent off the stage far enough that they’ll lose a stock. The higher their percentage amount is, the farther they’ll fly when you hit them with your attacks, especially your charged attacks. What’s unique here, though, is the rage meter. As you deal damage to your opponent it’ll start to fill up. When it’s half-way filled you can hit both shoulder/bumper buttons to kind of blast back your opponent a bit. This empties your rage meter no matter where it was after the half-way mark, but it can also interrupt an opponent’s combo and give you a bit of breathing room. Hitting the bumper/shoulder buttons when the meter is full will give you a power increase for a limited time, making your attacks hit harder and also making it easier to send your opponents flying. There is one small catch to the meter though: using your special attack will use a small bit of it. However, if you’re in the middle of a combo you’re basically netting what you lose if you use a special attack to finish the combo. 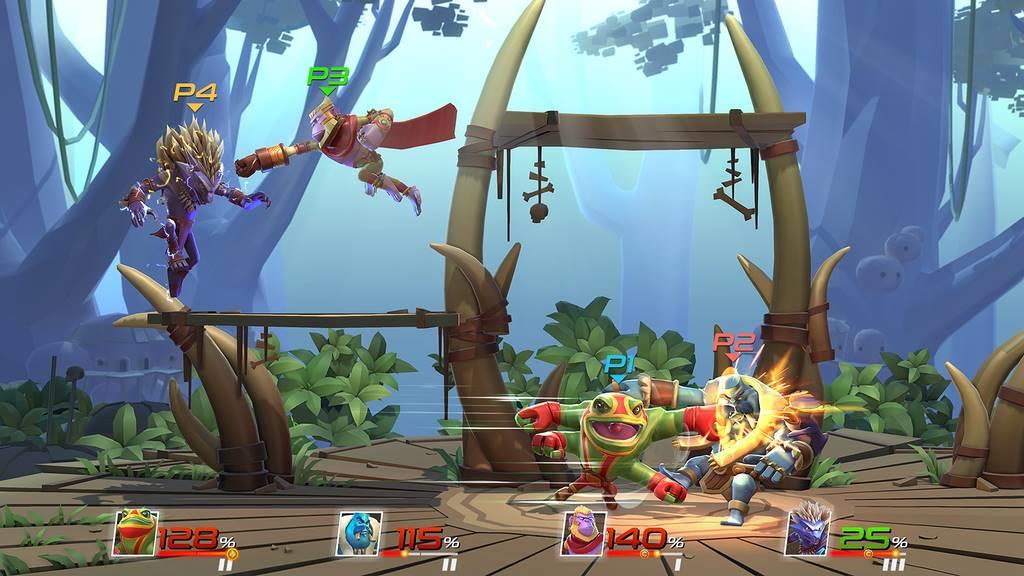 On the main menu you have several options you can choose from, including various objectives you can complete for rewards such as gold, your typical single player and multi-player options, online play, a store, Touranments (which lets you look at upcoming tournaments via smash.gg), and Brawlout TV where you can watch some online matches. Single player lets you do a quick match against up to three CPU opponents (on teams or free-for-all and either timed, using stocks, or both), practice with any unlocked fighter, go through the tutorials, or take on the arcade mode. Surprisingly, arcade mode plays more like Mortal Kombat in a way. You have three difficulties of towers to challenge and as you clear a stage you’ll move onto the next one until the final boss of that tower. The difficulty differences aren’t just in how difficult the opponents are, but how many you’ll face. On Easy you’ll just have one opponent, on Medium two, and on Hard three, and it’s not a free-for-all, but a two-on-one or a three-on-one match. You do have some breathing room though as you’ll only start with one opponent and the next will join the fray after thirty seconds have passed. Any opponent that loses a stock will also have to wait thirty seconds to rejoin the fight. Clearing each stage, as well as the tower in general, will lead to various prizes, usually gold and piñatas. Wait…piñatas?

So that store I mentioned. Brawlout has a lot of unlockables and there are two ways to unlock them. Most of them are by spending gold on piñatas and breaking them open. A lot of these are cosmetic items. However, you can also unlock more fighters by playing as certain characters and leveling up their mastery. Each victory with a character will give them experience and at certain mastery levels you’ll unlock something for that character. Around mastery levels three, four, and five you’ll unlock one or two new fighters…but the catch is that they’re alternate versions of the fighter you used to unlock them. For instance, after leveling King Apu a few levels I unlocked Apucalypse who fights very much the same way with a couple of differences in his moves. Now granted I haven’t unlocked everyone yet so maybe a few alternates are more different from their original counterpart, but having only nine characters to start with (and only six of them being original to Brawlout, the other three are guests from other games), I wouldn’t have minded a few more original characters that what seemingly amounts to the equivalent of having Mario and Dr. Mario in Smash Bros.: they look different and play a bit different, but more original characters would have been nice. 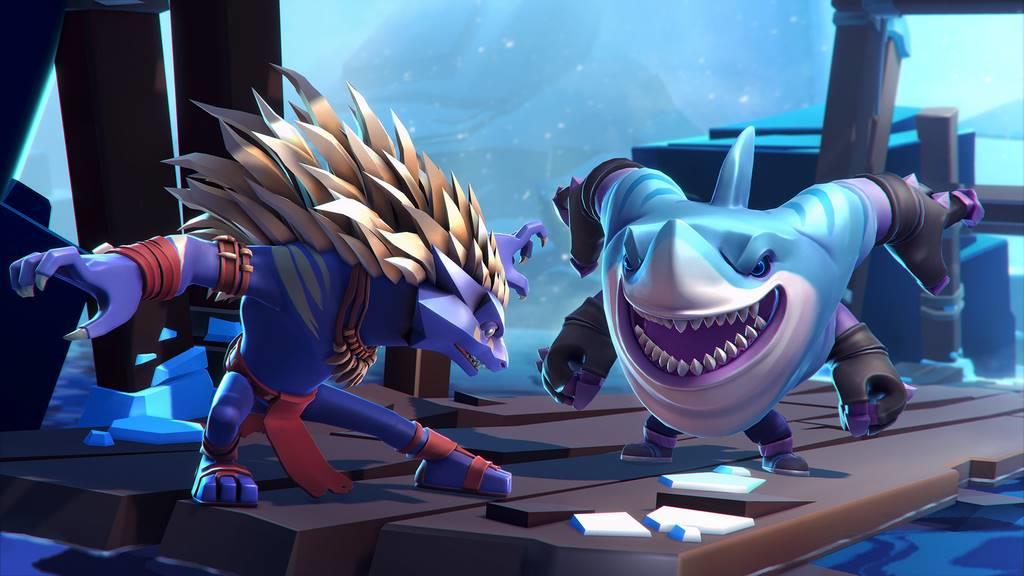 Finally there’s multiplayer and Tournaments. Couch Multiplayer is what is says: you and up to three friends can battle it out in either free-for-all matches or in teams. You can also play one-on-one matches online either in private lobbies or via matchmaking, and either ranked or non-ranked. However, unless I’m missing something, you can ONLY do one-on-one matches; there’s no option for three or four person free-for-alls or teams. If you choose to do matchmaking you can choose where to look for a match based on your region (after the first time, you can change your region in the settings), but then it’s just waiting for a match to be found, though you can go back and do CPU matches while you wait. However, either there just aren’t a lot of people playing yet or the matchmaking system was having some issues because a few times I waited nearly five minutes and a matchup was never found, so unfortunately I couldn’t test out the online play for this review. However, once I’m able to I’ll post a follow up comment with my thoughts on it.

You can also do ranked matches, but you have to reach level three mastery with at least four fighters to even unlock that option. That I kind of understand; they want to make sure you’re prepared for the challenges you’ll face in ranked competition, and to do so they want you to get familiar with a few characters first. As for private lobbies, this is where you can play with friends online and I’m happy to say that you can choose either free-for-all or teams here, just like in Couch Multiplayer. Maybe with the matchmaking they tried testing three and four player matches, but the servers just couldn’t handle it that well…but then why can you do just that with the private lobbies? 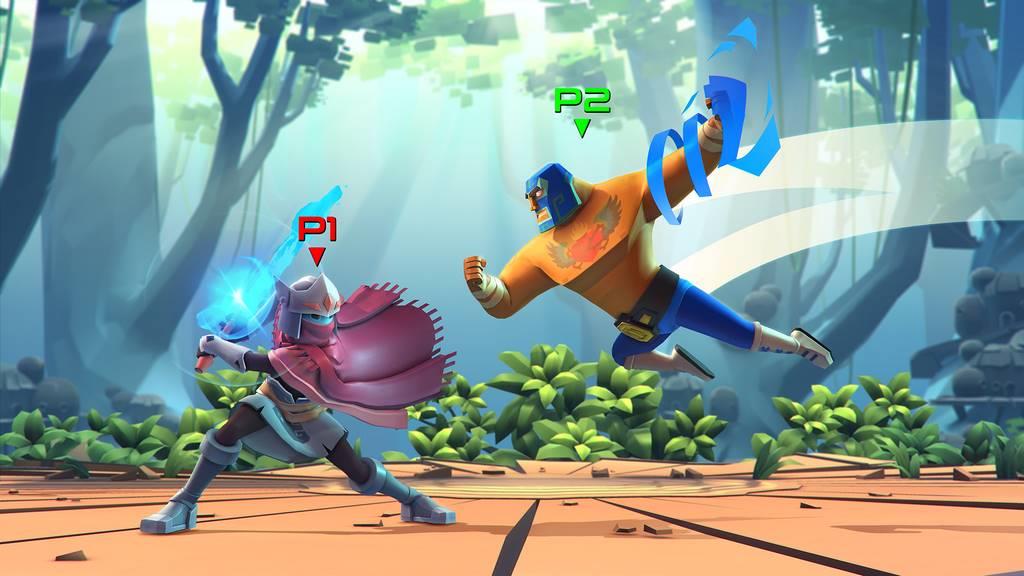 My initial response to Brawlout was that of a more faster-paced and difficult Super Smash Bros.. My reaction is still the same, but I was surprised how quickly I began to adapt to the mechanics. While the roster is small, each fighter has their own unique moves and strengths. The faster pacing does take some getting used to, but it’s not to hard to adapt after a few matches. I will say though that Arcade Mode can be quite the challenge, even on Easy difficulty as the final challenge of that tower…well, I won’t spoil it but it was definitely more difficult than I originally thought. My only other issues are that, aside from the lack of getting into matches online, I really wish you could do more online than just one-on-one matches. Beyond that the game is essentially Smash Bros. with a lot fewer characters (not counting alternate skins) and a few different mechanics. Overall though, Brawlout is a lot of fun to play and one I’d love to get my friends to join in on at some point.

Brawlout is a pretty fun Smash Bros.-esque fighter that’s quite a bit more fast paced.  While the roster selection is small, and the unlockable characters are similar or just alternate versions of the original lineup, the fast-paced action and unique moves for each character make this a pretty fun game to play with friends, either at home or online.