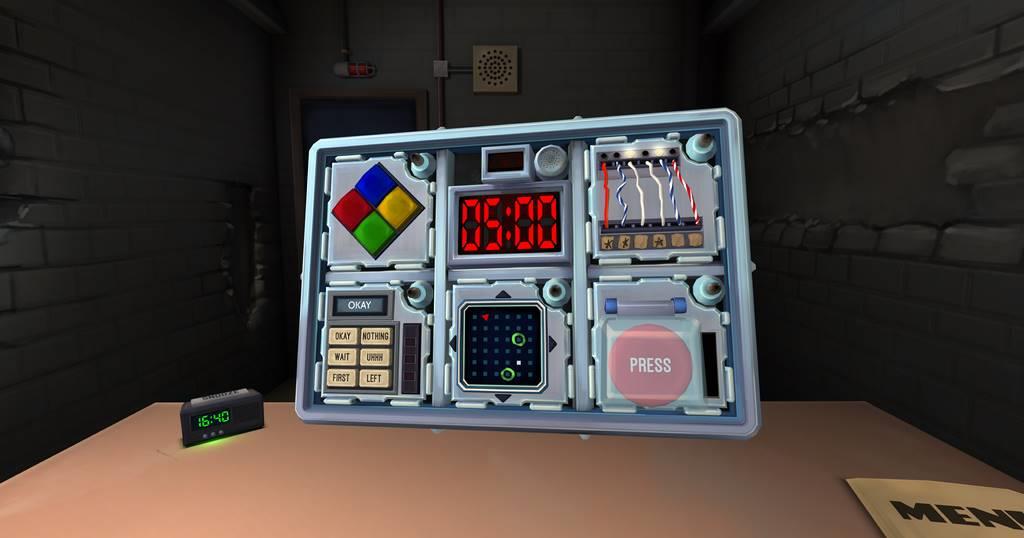 Keep Talking and Nobody Explodes

Written by Sean Colleli on 9/28/2018 for SWI
More On: Keep Talking and Nobody Explodes

As a rule, I am not a fan of multiplayer-only games. They usually have a boorish competitive aspect that just isn’t my cup of tea; a spirited Mario Kart match or GoldenEye duel between friends is great, but I’ve never set foot in Overwatch. I prefer creative cooperative experiences like Portal 2 or the mad chaos of Mario 3D World; I even get a chuckle out of the groan-inducing prat-deaths of Death Squared. That said, Keep Talking and Nobody Explodes is about the most unique co-op game I’ve ever encountered. I’d seen click-baity playthroughs of the Steam version before, but actually playing the game is something else entirely.

Our EIC Chuck advised me that this is a really good couple game, so I broached the subject with my wife and she was eager to help out. The game has a premise that is all but guaranteed to produce laughs: one player is defusing a bomb, while their partner, the “expert,” reads them incredibly convoluted instructions on how to disarm said bomb. On Switch, this is achieved practically with the defuser looking at and interacting with the bomb on the Switch in handheld mode, while their partner reads the instructions on a smartphone, tablet, laptop or even a printout.

Each “run” has unique instructions, generated by a seed that the game gives you at the start. You plug this value into the official Keep Talking and Nobody Explodes bombmanual.com website and it spits out instructions tailored to that unique seed. This cuts down on cheating; every run is a little different from the rest and the procedural instructions reflect this. The instructions themselves are hilariously convoluted—lots of meandering if-then-else logic paths—and the presentation is comically clinical. It looks like a grainy third-generation Xerox replete with black and white diagrams and too-tiny type, like it was punched up by a detached government employee at the end of his shift. 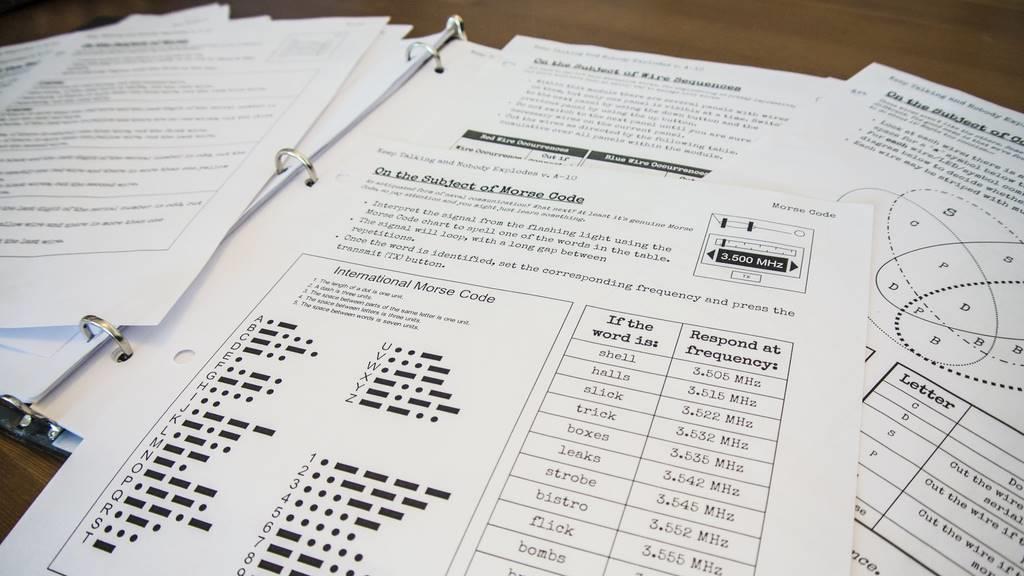 The view for the defuser is no less entertaining. Each bomb has several modules—up to 6—that represent stereotypical bomb components such as a keypad, a giant button, a Morse code reader, and the obligatory colored wires. Each module can be tackled in any order, but they must all be disarmed to defuse the bomb. As the game progresses in difficulty it will add sillier but more complicated modules including a color-coded Simon memory game, and even a game of who’s on first. There is also always a big, red, distracting countdown timer, which also records your error “strikes” above it: get 3 strikes or let the timer hit zero and kablammo. Smaller, “needy” modules also show up occasionally. These can’t be permanently disarmed but have their own nagging countdown timers, and give the defuser distracting, simple or repetitive tasks must be dealt with periodically while he or she is working on the other modules. The environment you play in is also amusing and devious. The bomb is inside a dilapidated, sealed room, with distractions such as a beeping alarm clock or the occasional intruder pounding on the locked door.

As you can imagine, Keep Talking and Nobody Explodes requires incredibly strong and detail-oriented communication skills. No detail is too innocuous; the defuser must relay not only the types of modules, but also whether the bomb has batteries or connectors on its casing, and what type. Furthermore the instructions are completely in black and white, making the expert effectively colorblind, and the colors of wires and buttons is always vital to defusing those modules. 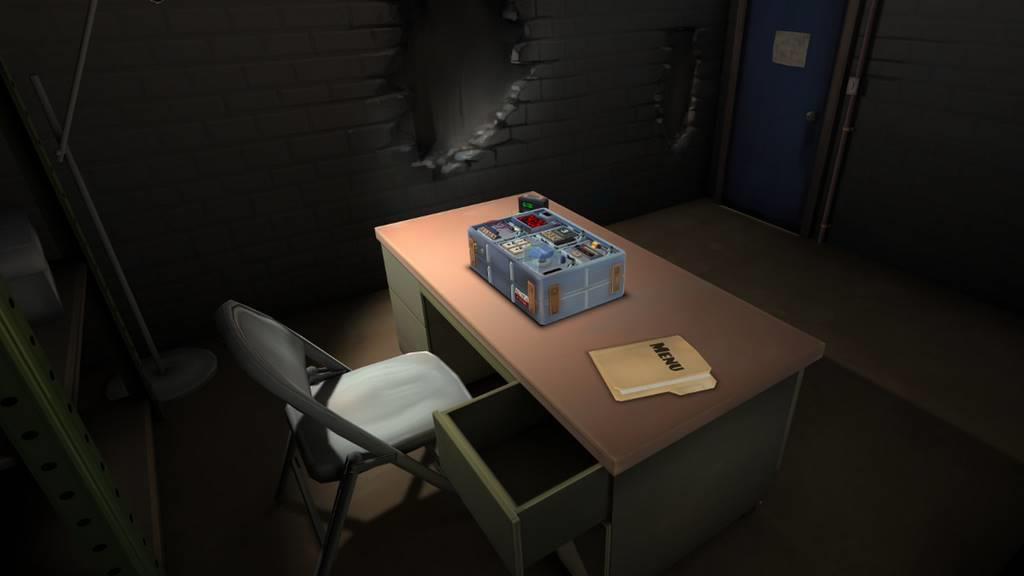 On the other hand, the expert has to be extremely specific and really know what the heck they are talking about. “If there are more than 2 batteries on the bomb and there is a lit indicator with label FRK, press and immediately release the button” is one of the simpler instructions. It gets really nasty when the bomb presents you with multicolored striped wires. The instructions include a complicated Venn diagram with different letters that refer to a chart where each letter corresponds to a different instruction and the line quality of each Venn oval represents the various wire colors. Yowza.

As you might imagine, this game is not for everyone. It might be great at parties where everyone is a little silly and the fun is really about who can survive the longest or impart the clearest instructions through a haze of alcohol. It’s also a sure winner with people who love cooperative brain-teasers or just language puzzles in general. But Keep Talking and Nobody Explodes can also be incredibly frustrating if you aren’t in the right frame of mind to play it, or if you (or your partner) are feeling impatient at the moment, so keep that in mind.

The again, now I know what Chuck was talking about. Much like the programming trick where a stumped coder will explain his work to a rubber duck until the lightbulb goes off, Keep Talking and Nobody Explodes teaches you to really slow down and listen, to both yourself and your partner, and then impart what you say as clearly and deliberately as possible. I’m not going to promise that this game can substitute for marriage counseling, but if you and your significant other sometimes find each other talking past each other, Keep Talking and Nobody Explodes can be a trying, but rewarding, team effort in meaningful communication.

Keep Talking and Nobody Explodes is the most unique co-op game I’ve ever played, but it’s also a brilliant idea that is well executed, and it suits the Nintendo Switch particularly well.