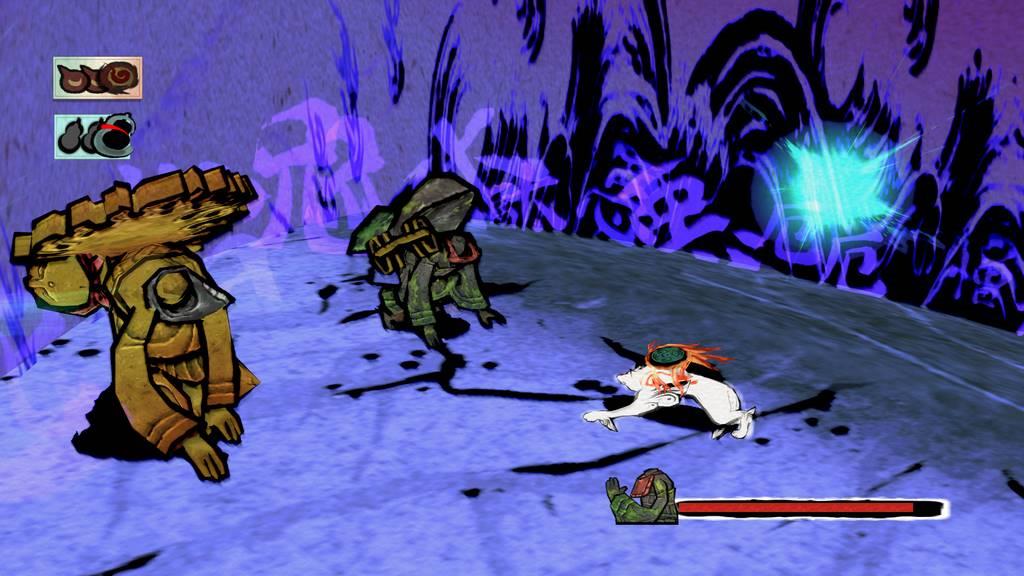 When Okami it came out in 2006 on the PlayStation 2, it was met with critical acclaim, and between the cel-shaded art style and the unique Celestial Brush mechanic it’s not hard to see why.  Two years later the game was released for the Nintendo Wii which, again, received positive reviews outside of the motion controls for the brush which was said to have received mixed responses.  Over the next ten years an HD remaster of Okami would see releases on the PlayStation 3, PlayStation 4, Xbox 360, Xbox One, and Windows PC, before hitting the Nintendo Switch on August 10th.  With the Switch utilizing both motion controls and a touch screen, and having never played the game when it first came out…or any of the re-releases for that matter, let’s see if Okami HD on the Nintendo Switch deserves more critical acclaim.

A long time ago in a far away land, legend told of a horrible beast that threatened the land.  However, a white wolf named Shiranui and the swordsman Nagi would defeated the beast known as Orochi and protect the tiny village of Kamiki.  Now one hundred years later, Nagi’s descendant Susano, the self-proclaimed “greatest warrior”, refuses to believe the story about Nagi and releases Orochi who then curses the land, draining all of the life and color from it.  Sakuya, he guardian of Kamiki Village, summons forth the Sun Goddess Amaterasu, known to the villagers as the reincarnation of Shiranui, and asks her and the tiny artist Issun to remove the curse and restore the land to what it once was.

The main mechanic of the game is the Celestial Brush which you can use not only in combat to help defeat enemies, but also while out in the field to repair broken bridges, create lily pads in the water, draw a sun in the sky to shine light on various darkened objects, and more.  Throughout the game you’ll come across some incomplete constellations up in the sky and you’ll use the brush to complete them, thus earning you new types of brush strokes and, along with it, new abilities to help rid the land of darkness.  You also have other items to help you out in combat such as Reflectors that you can equip as primary or secondary weapons.  The primary weapon is typically a straight up melee attack while equipping them as secondary weapons can have various effects such as a rapid fire attack or a shield.  You can also power these up along your journey so it’s nice to be able to mix and match to see what suits your play style. 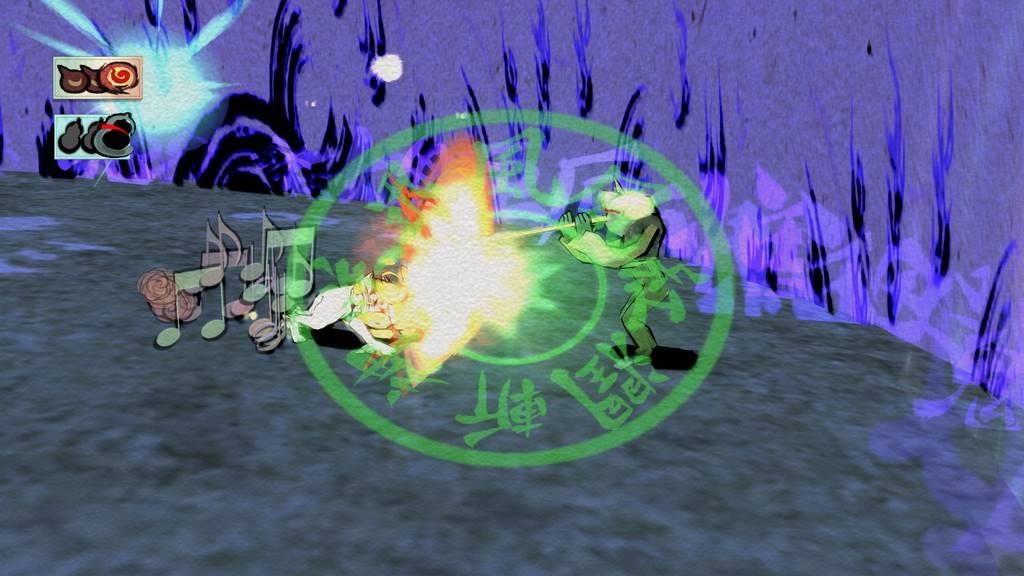 The game recommends using the Joy-Cons detached from the Switch whether you’re in docked or tabletop mode, but what about when you’re on the go and just want to play in portable mode with the Joy-Cons attached to the Switch?  Thankfully you can actually just draw on the touch screen itself.  As soon as you touch the screen the Celestial Brush becomes active (as opposed to holding L on the left Joy-Con) and you can accurately draw what you need to, and since all action stops when you’re drawing you don’t have to worry about having to perform other actions while drawing, meaning you can make sure what you’re drawing is accurate the first time.  This is especially useful during various cut-scenes where you have to draw at certain points during the scene but you have a limited amount of time to properly draw what you need to before you fail and have to start the scene over.  Just remember to turn off the motion controls in the menu if you’re playing like this because otherwise you’ll start to wonder why your brush is moving all over the place as you’re trying to draw on the touch screen with the Joy-Cons attached. 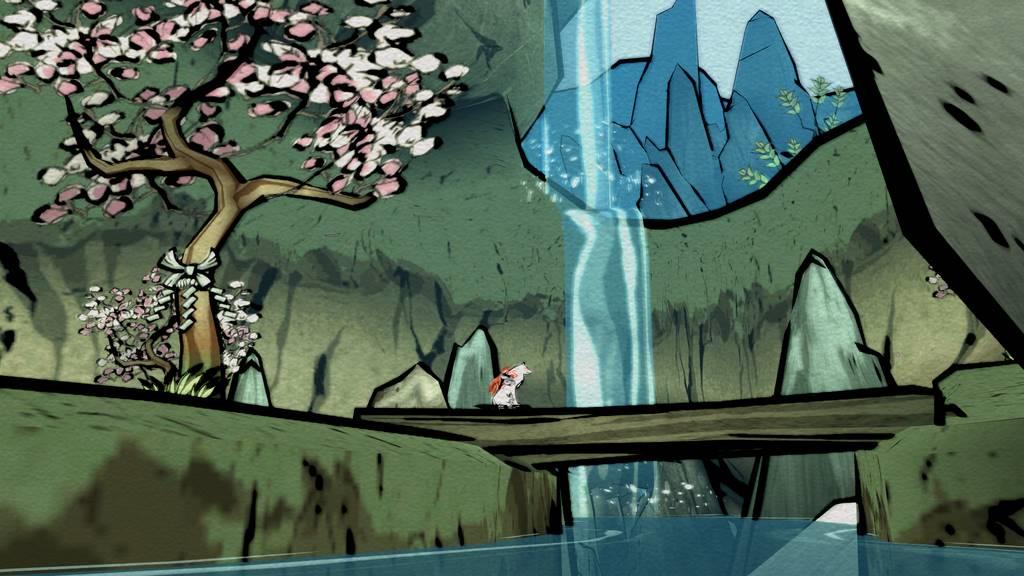 Ammy and Issun’s journey is more than just finding some saplings and bringing them back to life with some ink; you can actually take on some side quests here and there.  These include things like digging up turnips while some old lady chases you, taking out specific monsters on someone’s hit list, entering various shrines to take out the enemies within and lift the darkness in that area, and so on.  A lot of these will earn you money and praise as well as other items.  The money can be used to buy items from the merchant that you see now and then while praise is used to increase the maximum capacity of either your life energy (called solar energy in the game), your ink, your coin purse, or your food bag which, when filled up with food you find lying around, can revive Ammy when her solar energy runs out.  Early on the game is kind of simple due to its nature so I spent a bit of praise raising my energy and ink and didn’t bother touching anything else until my purse was almost full.

As for the nature of the game, Okami does have combat where you’ll deal with various imps within a confined combat area as well as bosses here and there, but a lot of the game is based around exploration of the areas you’re in.  A lot of it actually reminds me of The Legend of Zelda, especially when you reach the first major boss as it really has an Ocarina of Time/Wind Waker feel to it not only with the boss itself, but in how you have to beat it: taking something you just learned and applying it to the boss, possibly even doing a bit of sequence breaking in the process with the fight itself.  The cel-shaded art style is absolutely incredible and the music is nice and relaxing while you’re out exploring and ramps up during combat and boss fights.  In fact, if there’s anything I’d have an issue with here, it’s that the non-boss fights are a bit on the easy side.  Besides having a god level that can shield you from an attack or two that you can build up with combos, a lot of the enemy attacks are easy to avoid in the basic imp fights.  The bosses and unique battles can be a challenge at times but beyond that, nothing incredibly difficult.

I really regret not playing Okami when it first came out, but at the same time I’m glad the Switch version was my first experience.  While the motion controls aren’t perfect and there are times where using the analog stick to use the Celestial Brush works better, I can’t imagine trying to draw everything with the analog sticks.  Then again for those who played the game back with it first came out on the PS2, you’ve probably become much more accustomed to it than I did since I had three ways to use the brush while PS2 players only had one.  Whether you played through the original or have never picked up the game before, Okami HD is a great addition to the Nintendo Switch library.

Okami HD is a beautiful and enjoyable game and I’m glad I finally got the chance to play through it.  You now have three ways to use the Celestial Brush and each way has certain instances where it might work better than the other two.  Between the great cel-shaded graphics and relaxing music and atmosphere, Okami HD is an amazing game that fans and newcomers to the game should check out.