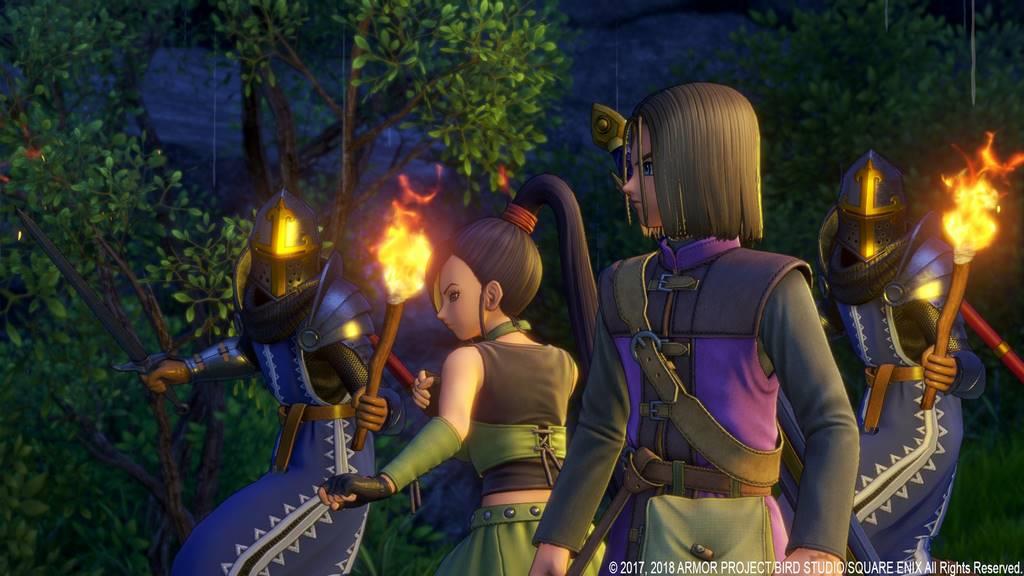 I recall how I got my copy of the original Dragon Quest (called Dragon Warrior) on the NES when I was a kid. It was bundled with my subscription to Nintendo Power. Six year old me couldn’t quite grok the concept of equipping armor and weapons and saves at the time, but I always enjoyed pushing to see how far I could go before ultimately dying. It wasn’t until over 15 years later with Dragon Quest VIII on the PS2 would I appreciate the series for what it was, but again, I was swayed with the purchase of a bonus, the demo for the forthcoming Final Fantasy XII. I wasn’t really interested in purchasing a Dragon Quest game on its own merits until Dragon Quest IX in 2009, which was the perfect game for the Nintendo DS at the time, it also just happened to come out on my birthday. But what does this have to do with Dragon Quest XI? The latest in the Yuji Horii created franchise that birthed the JRPG as we know it, Dragon Quest XI proves that 32 years since its inception that it is still a premier franchise in the gaming landscape that wears its history like a proud badge of honor.

The story of Dragon Quest XI tells of the World Tree, Yggdrasil, and it’s avatar, the Luminary, a special being born of its boughs, that will be the one to fight the coming Shadow Lord. Unbeknownst to me at the outset of the journey, would be the twists and revelations tied to my birthright and powers. I spent much of the game persecuted, dubbed the Dark Spawn, running from town to town, dogged by pursuers, the royal guard of the kingdom of Heliodor while fighting to clear my name. I encountered plenty of interesting people, friend and foe alike, as I traveled from the combat arena of Octogonia, to the fallen kingdom of Dundrasil, to the World Tree itself as my fight against the Shadow Lord drew ever closer. Given that this is a Dragon Quest game, expect to put a bare minimum of 60 hours in to see this game to completion, and even then that’s not going to feel satisfying, so, make sure you stick around after the credits. Overall this experience has felt very similar to some older RPGs, like Final Fantasy X, in that it’s pretty straightforward and rather cinematic. While there’s plenty of side-story fluff, the main story beats feel concise and to the point, and this game doesn’t really do anything to waste the player’s time for the sake of padding out the game clock.

So who’s coming along with us on this rag-tag adventure to save the world? Erik is the first companion who joins the cause, after a brief encounter with the Luminary in prison, his thieving skills are a definite help on the battlefield. There’s the pint-sized mage, Veronica, who’s got a mouth to go with her temper and penchant for casting explosive spells. Serena is your devout healer who keeps everyone hale and healthy. Sylvando is the star of a circus troupe who steals the show everywhere he goes, seriously he is a delight and one of my favorite characters. The duo of Rab and Jade is a curious one, why is this old man partnered up with this femme-fatale who is extremely capable in combat? Everyone’s got their reasons for tagging along, and it makes for an interesting party dynamic. The characters are well written and the voice acting for them is excellent, although, as the main character, it felt like I was more mute than usual. I get the whole silent protagonist angle, but it would have been nice if in a few instances of interaction if they injected a little more personality, I mean, if I’m saving the world, I don’t think I’d be so quiet about it. In general the voice acting throughout the game is pretty strong. There’s a wide variety of accents, and while some of it gets a little ‘hammy,’ it’s never much of a detractor from the experience. I’m kind of bummed that there isn’t a Japanese voice track to go along with this release though. 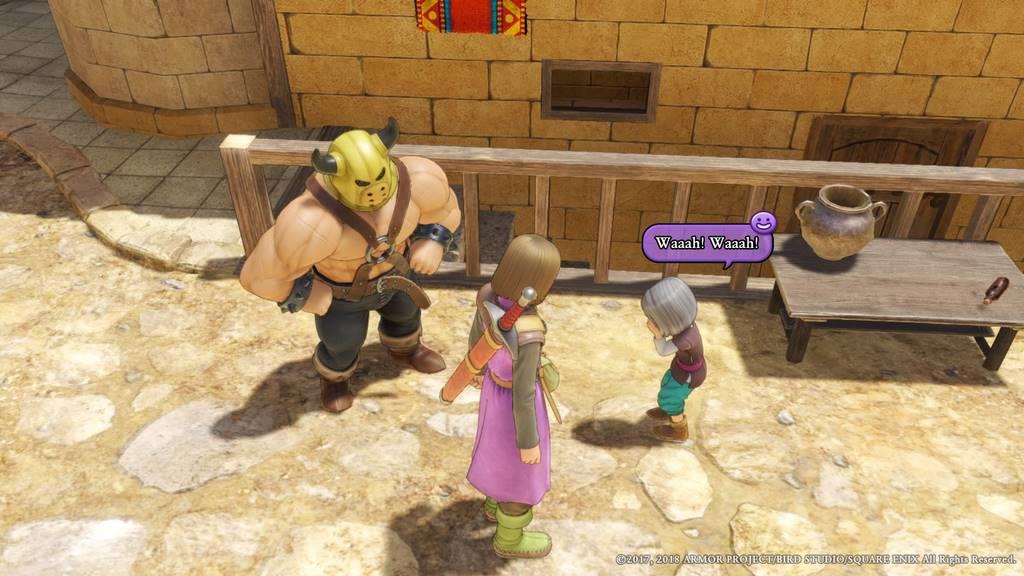 Visually, I’m gushing about how good this game looks on a PS4 Pro. The Unreal Engine does a spectacular job of bring Akira Toriyama’s iconic designs to life, unfortunately this just makes me demand a remake of Chrono Trigger in this engine, or some kind of proper sequel. There’s a boisterousness to the characters and their movements, both in combat and in the world proper that feels like a love letter to the previous entries of the franchise, from the static 2D sprites of yesteryear to these fantastic models, this game is gorgeous from top to bottom. There is some occasional frame-rate hitching, even on the PS4 Pro, but it’s got to be a particularly busy scene for it to crop up and thankfully the cinematic moments aren’t bothered by this issue. The soundtrack might be a point of division between me and some people. While I think that Koichi Sugiyama and the Tokyo Metropolitan Symphony Orchestra do some great work together, I wasn’t all that jazzed on this soundtrack. The Dragon Quest theme is without a doubt iconic, and the reuse of classic themes is welcomed. But the music in towns, battle, and the overworld is just a touch too short between repetitions. Coupled with the fact that the town theme rarely gets any variation, and the battle theme never really changes. It’s not something I bemoan for a lack of quality, but it’s the frequency of repetition that got to me after just a few short hours. One thing I totally appreciate though is how much the audio team reuses some of the classic sound effects from the NES era, like the sound when transitioning between areas, and the little squeal of attack initiations, these little details were really doing it for me.

There’s been enough RPGs out there with design philosophies that were able to eschew random battles, and I’m happy to see that Dragon Quest XI is without them as well (within specific circumstance). Random battles have grown old and tired and thankfully this game doesn’t waste time by forcing them down player’s throats. However this does lead to a couple of situations where I might have been underleveled, and I can think of one in particular where after grinding away one more level I learned a skill that made a fight significantly easier. That’s not to say that the combat is particularly difficult, it can definitely be a challenge at times, but I’ve never felt like I was clearly outmatched (unless it was for the sake of story). The ‘Pep’ system also adds an interesting new twist on battle. Think of it as the Dragon Quest equivalent to the Limit Break system or Trance system of old Final Fantasy games. But when multiple characters are in their ‘Pepped up’ state, they can combine their powers to make some truly devastating attacks. The game is also quite generous with the auto-battle capabilities this time around. Don’t really feel like dealing with all the menu navigation of combat? Have something else you want to do while grinding some levels? Just set the tactics to ‘Fight Wisely’ and the game will do a fantastic job of handling battles in an efficient manner. 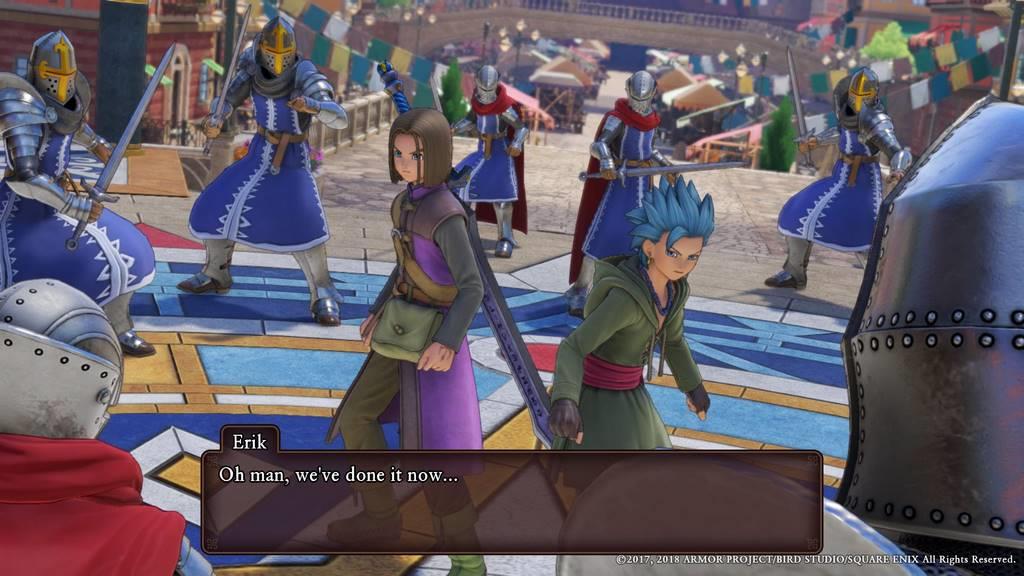 Outside of combat there’s plenty of exploring to do, whether it’s to find Mini Medals, gamble at the casino, or farm crafting materials, there’s plenty to do. I am love with the crafting system this time around. The crafting mini-game using the mini-forge at camps is one of the most funs things in the game to me, and finding the recipe books always gets me excited for the next stop at camp to see what kind of stuff I could whip up, and drop me to turn random stranger’s homes topsy-turvy as I searched for recipe books. Money always feels tight in Dragon Quest games, so having the option to make my own gear is always a plus. There are plenty of side-quests to partake in as well, a lot of which offer crafting recipes as a reward so I highly recommend making the effort to get some of them done.

Dragon Quest XI is the dose of classic JRPG that does a great job of striking a balance between being modern and nostalgic. The story is a proper epic, with a ton of likeable characters full of personality and humor (like Rab and his ‘hobby’), but at the same time serious enough to be aware of what’s at stake. The game is a visual gem, and even with my misgivings, has a soundtrack to match the epic tone of the story. The combat is functional and fun, giving access to all players regardless of skill level, and for those seeking a major challenge there is the new ‘Draconian Quest’ which offers a wide variety of modifiers that can make enemies stronger, or prevent fleeing from battle. It’s been a little over nine years since the last Dragon Quest game was available on US shores. Since we didn’t get Dragon Quest X, I’ve been holding out hope that Dragon Quest XI would be something special, and without a doubt it is. Whether it’s your first time with a JRPG or you’re a seasoned pro, this game is a fantastic experience from start to finish.

Dragon Quest XI is the perfect game to kick off the annual Fall glut of games, simply based on the merits of it being a massive sprawling JRPG that could easily carry you into the Winter months if you want it to. There's so much to do and it's so easily to get lost for hours just exploring the world trying to find the right materials to craft some better gear, or to finish up that side-quest that you picked up in Puerto Valor, or maybe the casino is more your style? Dragon Quest XI is easily one of the best JRPGs this generation, and it would be a shame if you missed it.