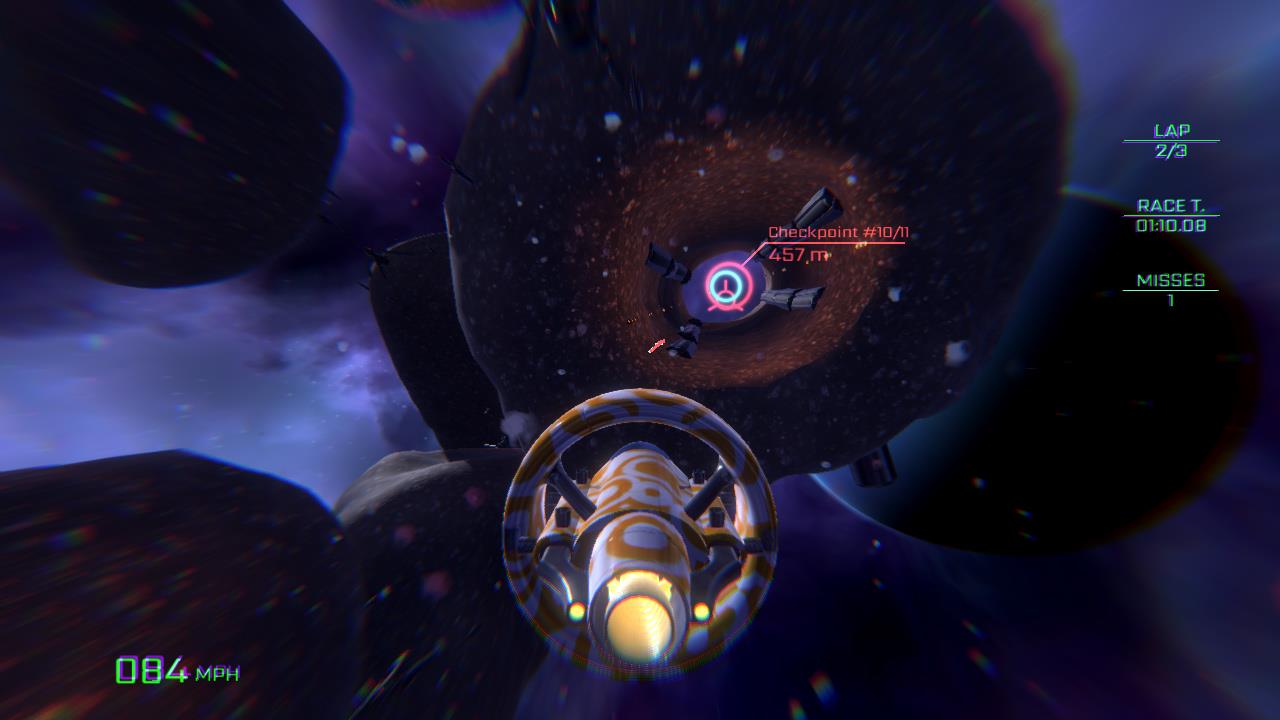 In 1986, Activision released Aliens: The Game for the Commodore 64. An adaptation of the action film classic, the Aliens game featured some pretty high-end visuals (for the time) in what was essentially a smattering of minigames strung together to loosely follow the plot of the film. In order to move on to the next section, players had to beat the section before. If you could not master each mini-game, you were hosed, and you would never reach the climactic battle with the alien queen.

One of these mini-games involved piloting the space marines’ dropship through the “pipe” (a pre-determined optimal rote through the atmosphere) to the surface of the planet. This was represented in C64 term by a series of circles that the player had to fly through, Pilotwings-style. This dropship mini-game was wildly difficult, and I wore blisters on my hands trying it again and again until I finally had it mastered. The secret was this: you had to start aiming for the next circle before you were through the current circle. You had to think ahead of the game by several moves in order to be successful. And of course, since this was the age before save files, I ended up flying through the pipe hundreds of times in my attempt to beat Aliens. It never really got any easier, even after I knew the secret. One wrong move and it was back to the beginning.

VSR: Void Space Racing is a racing game that feels like no other I’ve ever played. That’s because, due to the fact that races take place in space (duh), things like gravity and friction no longer have any bearing on the physics involved. They have been replaced by physics concepts like speed and inertia. If you aim in a certain direction and press the “go” button, your ship is going to go. And it will never stop until you change its direction or it rams into something. 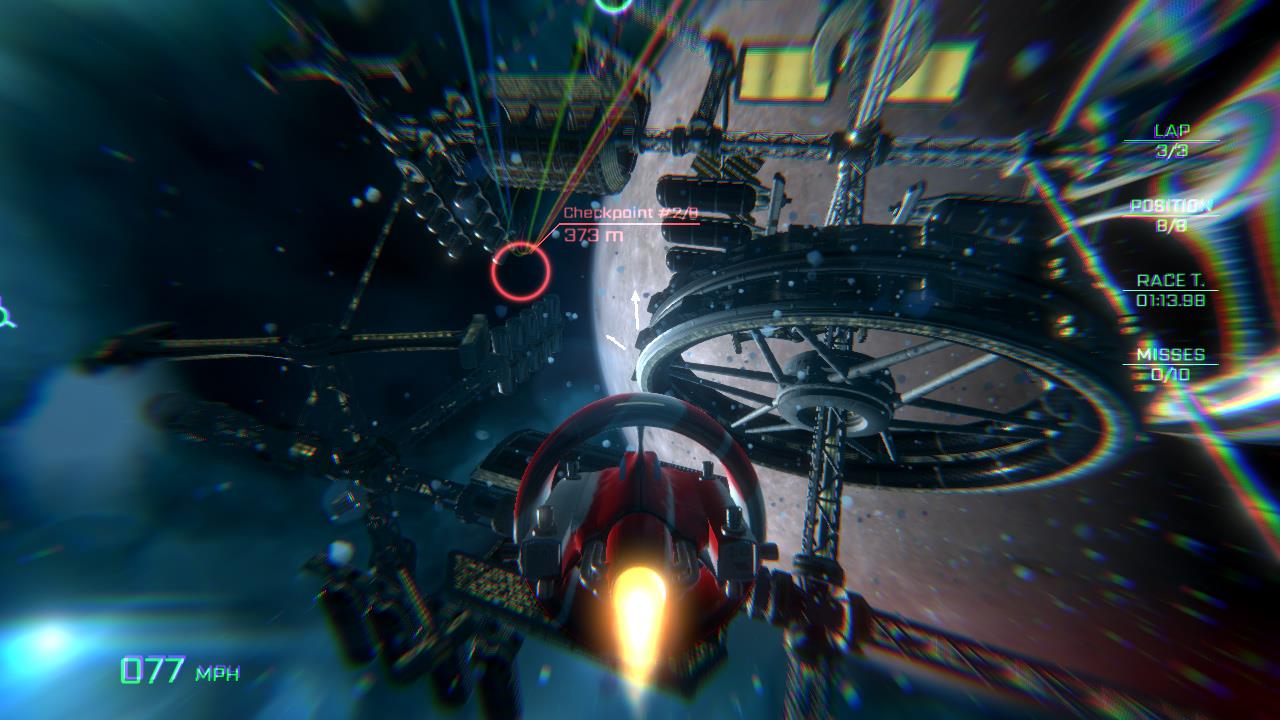 In practical terms, this means that in order to have even a small amount of success with VSR, you have to throw all of your expectations about how the game will control out the window. Most space-flyers use the Star Wars physics model, pretending there is an atmosphere present for ships to swoop around in. VSR makes a concerted effort to get things right, physics-wise. As a result, the first time you pick up the controller, the handling feels wild and unpredictable.

Each race begins at a starting line with 7 other racers, all of whom are experts at space flight. The entire group is flying through the same ringed course, and your opponents leave a colored trail in their wake to show you which direction they flew off in. It’s a good thing, too, because at the beginning of the game, it is incredibly easy to over-compensate while turning and get completely turned around. You will need that rainbow of color left by the other racers to get back on course. The first ten times or so I tried the opening race, I ended up spinning through space with no sense of direction, bouncing off stuff like a superball. The learning curve in VSR is incredibly high. 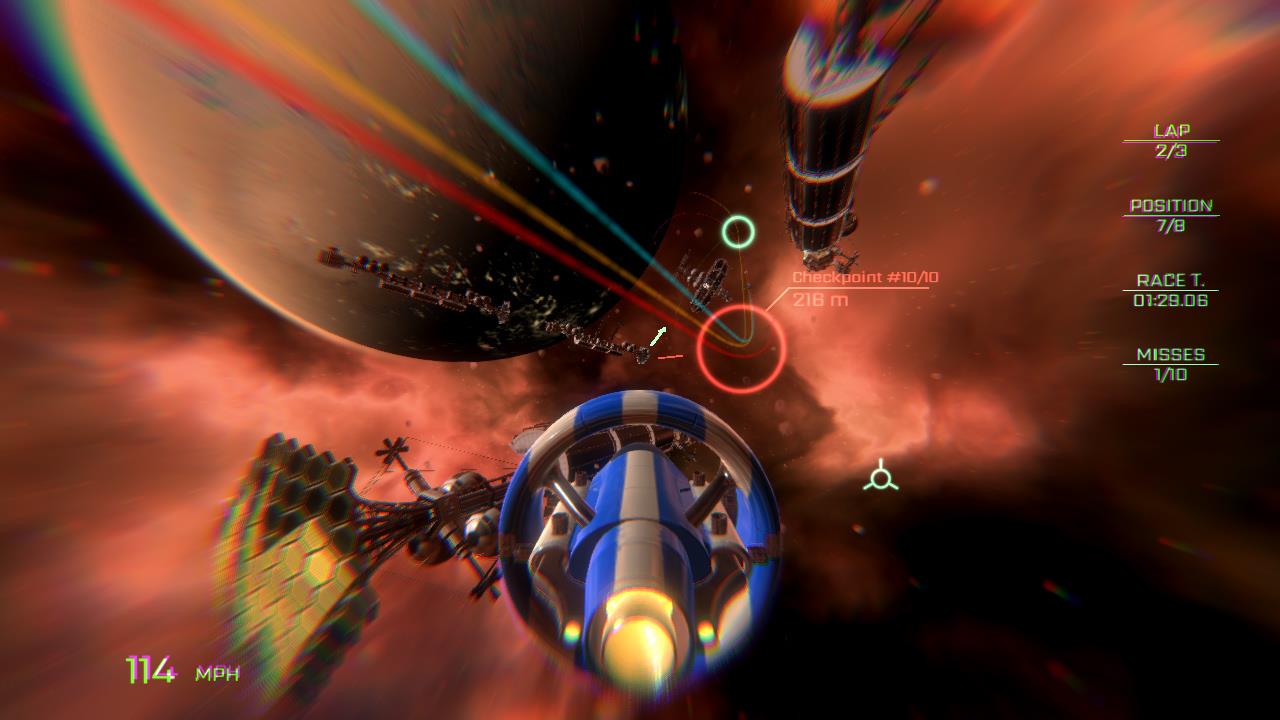 There is an open tutorial section included in the game, and new players can plan to spend at least an hour flailing about the tutorial track in order to get their bearings. The controls are simple (accelerate, brake, steer, tilt left and right), but getting your head around how your ship responds is difficult, to say the least.

Even after a good amount of time in the tutorial, expect to get dusted by your competition in the first race, even on easy mode. The tracks are unforgiving, twisting and turning among space-based scenery, and the other racers are all experts. The good news: stiff competition will make you better. The bad news: you have to take first place in every race to move on to the next one. Frankly, I would expect that at least half of the players that attempt this game will never see the second race, as the first is so difficult that they will give up long before beating it.

I was eventually able to fumble my way through by modifying my Aliens tactics to compensate for the momentum my ship carried. But I will never claim that I am good at VSR: Void Space Racing. The best strategy is to always know where you are going next, and plan three steps ahead. Course correction is a dangerous prospect, so making unnecessary adjustments is best avoided. Due to the fact that you are in space, speed and momentum are hard to gauge until you turn, making the brake button your new best friend.

The overall content included in VSR is a little light, but this is a budget title, so the volume of content feels appropriate to the cost. There are 8 courses, each of which can be raced on three difficulty levels. You start with one ship which can be reskinned with a few cool skins, and eventually there are two more ships to unlock. That’s about it. There is a split screen two-player mode, but good luck finding a friend masochistic enough to race against you once you have acquired rudimentary skills. Basically, two-player is an invitation to laugh at your friends while they spin out of control and curse. There is no story mode to speak of, and no online play beyond some leaderboards that I will never have a hope of topping. 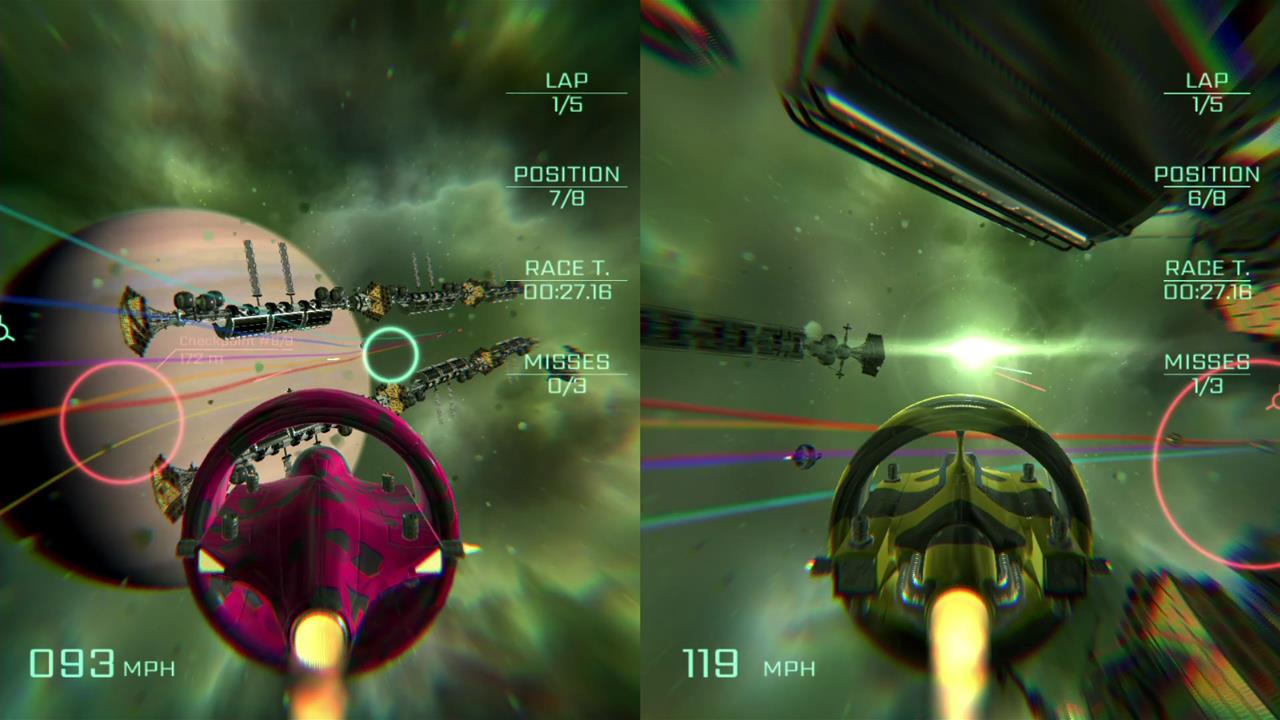 Regardless of the lack of supplemental content, all of this blazing difficulty comes in a an extremely beautiful package. VSR absolutely shines visually, making it one of the best looking games I have played on Switch. The vibrant color palate and cool motion effects give space a "pop" that I haven't seen in a lot of other games. In handheld mode, the game looks sharp and crisp. But when docked, Void Space Racing comes to life, with all of the care and detail the devs put into the space scenery coming to life at a solid 60 FPS framerate. While the ship designs are cool, they are all pretty similar, and are ultimately nothing to write home about. But the courses pack enough eye-candy in to make unlocking each new one a treat. The sound design is about what you might expect, with some techno tracks pulsing in the background. I turned them down a bit to hear the sound effects better, but preferences will vary.

Regardless of my personal results with the game, I feel like VSR’s developers deserve some credit for making something very new. With years (and countless hours) of videogaming under my belt, I have often wondered what it must feel like for a gaming neophyte to pick up a controller for the first time and try to play a game. I have watched non-gaming friends struggle with racing games, crashing into walls over and over, spinning out of control, not understanding the core basics of how the controls work, or how the buttons affect what is happening on the screen. Now I know how that feels. 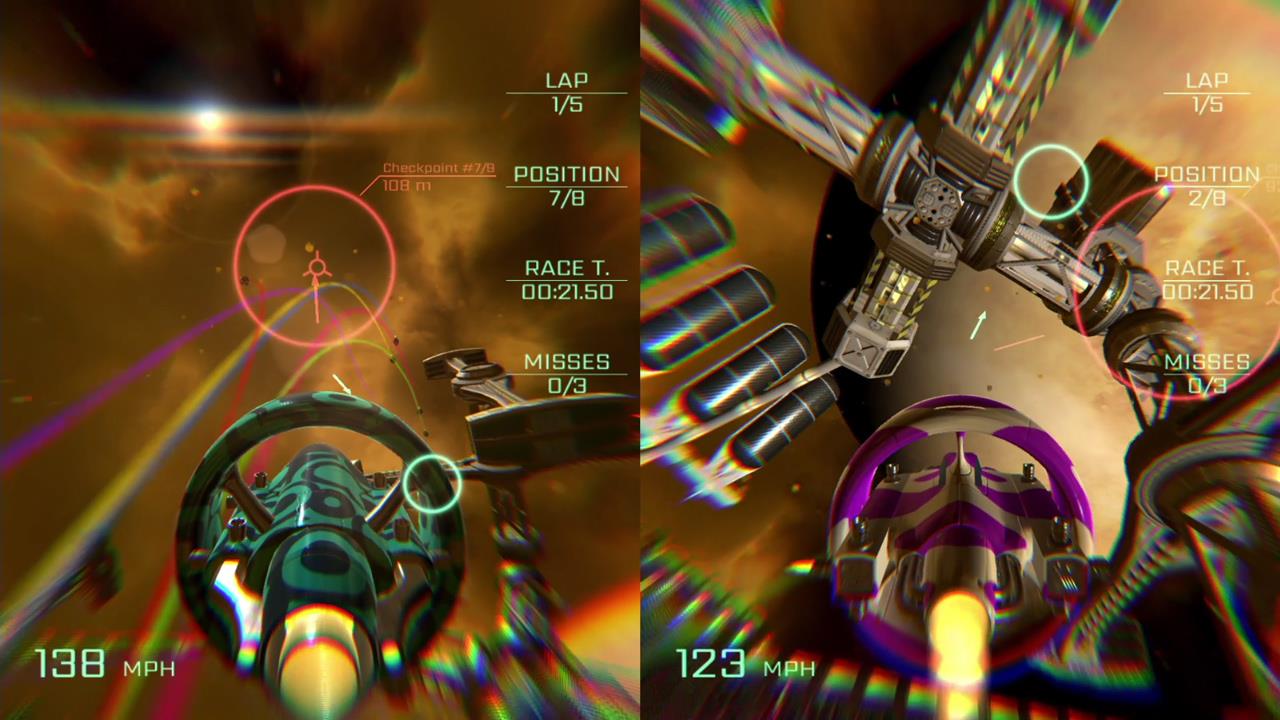 In space, no one can hear you scream. But in your living room, everyone can hear you curse. VSR: Void Space Racing is one tough game. If you do decide to give VSR a shot, I hope you are okay with losing. Prepare to spend a lot of time frustrated while you learn how to handle yourself in zero-g, and understand that there are not a lot of prizes for learning the game, beyond learning the game.

Smooth and beautiful to look at, VSR: Void Space Racing packs a difficulty curve the likes of which I have never experienced in a racing game. It is best to go into VSR with the mindset that you will not be playing a racer, but a whole new genre. Even with that in mind, I would expect a large percentage of players to bounce off of VSR the same way that my racing ship bounces off of space debris. This is a game for dedicated, patient players.