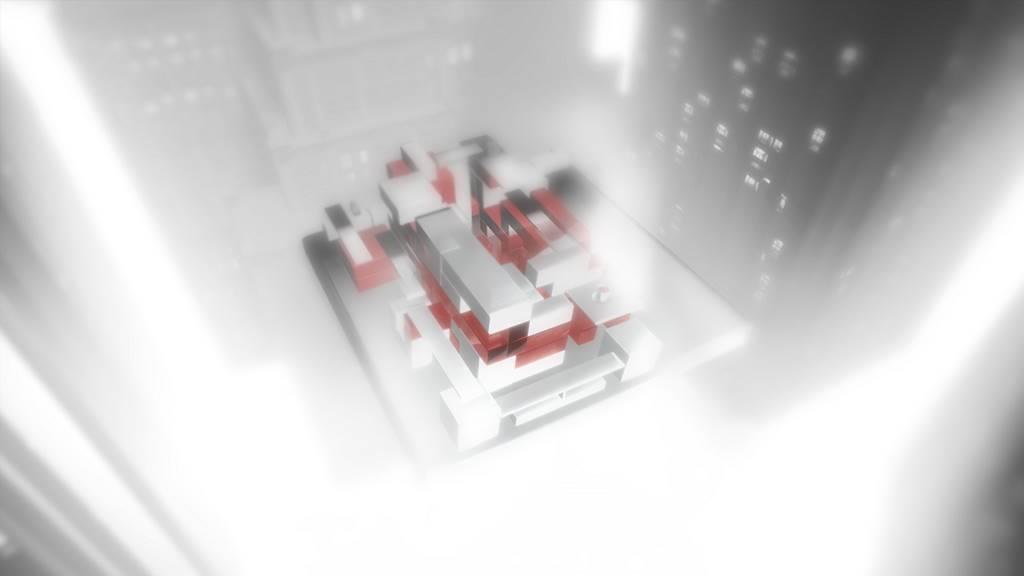 At its core, Salary Man Escape is a puzzle game, where players manipulate blocks in order to clear a path for a little guy to move from Point A to Point B. But this simple concept is wrapped in a package that is so surreal that it borders on dreamlike.

The little guy you are attempting to guide through this labyrinth of blocks and puzzles is a “Salary Man”, a guy that works at a 9 to 5 office job. He stands passively, clutching his briefcase and ready to flee, until a route is laid out for him, at which point he moves forward to his goal.  In Salary Man Escape, a 9 to 5 job is presented as something akin to a dystopian nightmare, soul-crushing and awful, enough to fill a worker with dread and despair. As the player solves puzzles and move forward in the game, they are steadily presented with a series of notes from “the office”, taunting them for their failure to advance and mocking their petty ambitions. The entire time, the same five or six 80’s Japanese pop songs chatter merrily away in the background, on a desperate, hopeless cycle.

The puzzles, constructed with blocks (and eventually other contraptions), appear to be hovering in midair in the midst of a shifting, surreal office. Since Salary Man Escape is a VR game, this gives the player the impression that they are trapped in an art-deco office hellscape, with giant keyboards below and other gargantuan office accoutrement hovering ominously in the air around them. The color palate is primarily black, white and red, instantly bringing the opening credits of Mad Men to mind. And like the dashing Don Draper, Salary Man Escape is a construct that is all gloss and success on the surface. But careful examination reveals that this piece of out-of-time desperation pop art is held together by spit and glue, and taken as a whole, Salary Man Escape ultimately feels a little empty. 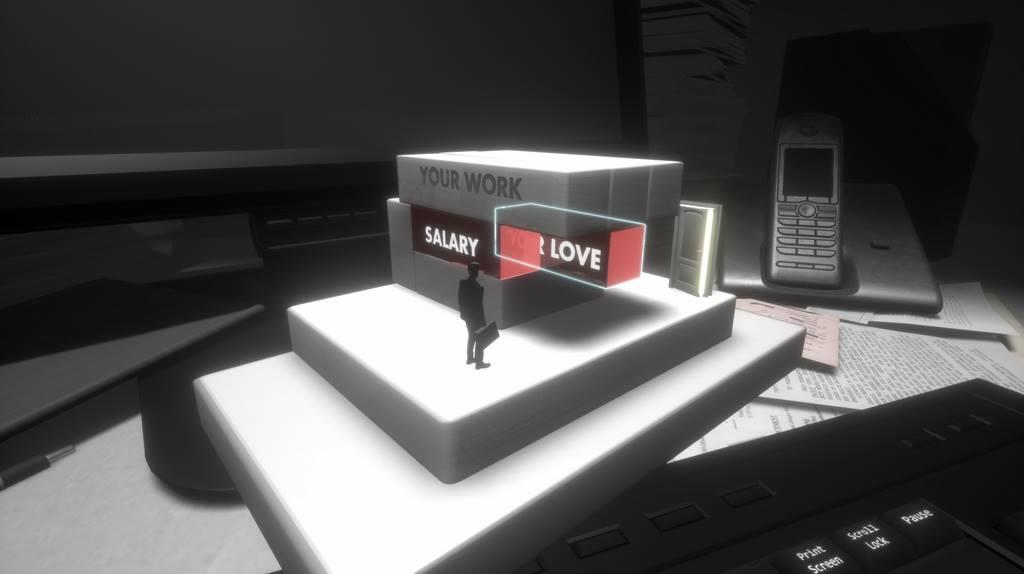 The puzzle design is fine. Inspired, even. Players are faced with a pile of carefully arranged blocks. Perched atop this Jenga-like pile on one end is the Salary Man, faceless and still. On the other end is a door. Several of the blocks used to build the puzzle are red (maybe 1/5 of them or so), the rest are white.

The player’s goal is to carefully manipulate the red blocks by pushing or pulling them out of (or around) the puzzle, causing the while blocks to fall in such a way that a clear path to the door is revealed for the Salary Man. Once the way forward is evident, the Salary Man comes to life and moves toward the door. If he makes it to the door, the player is able to move forward to the next puzzle. A timer counts down while the puzzle is examined and manipulated. If it reaches zero, the puzzle is considered failed and the player must start over.

Various wrinkles are added to this basic format as new mechanics and sub-goals are introduced. Picking up cups of coffee will extend your timer. The addition of scales adds an element of weight physics, allowing players to remove blocks to tip the scales in the desired direction. Treadmills send blocks careening in various directions, complicating the physics in unpredictable ways. Breakable blocks force the player to look at puzzles in a new way, to determine how other blocks will react when some are suddenly gone. And some puzzles have optional coin pickups that can be difficult to reach, but can be used to unlock advanced puzzles. 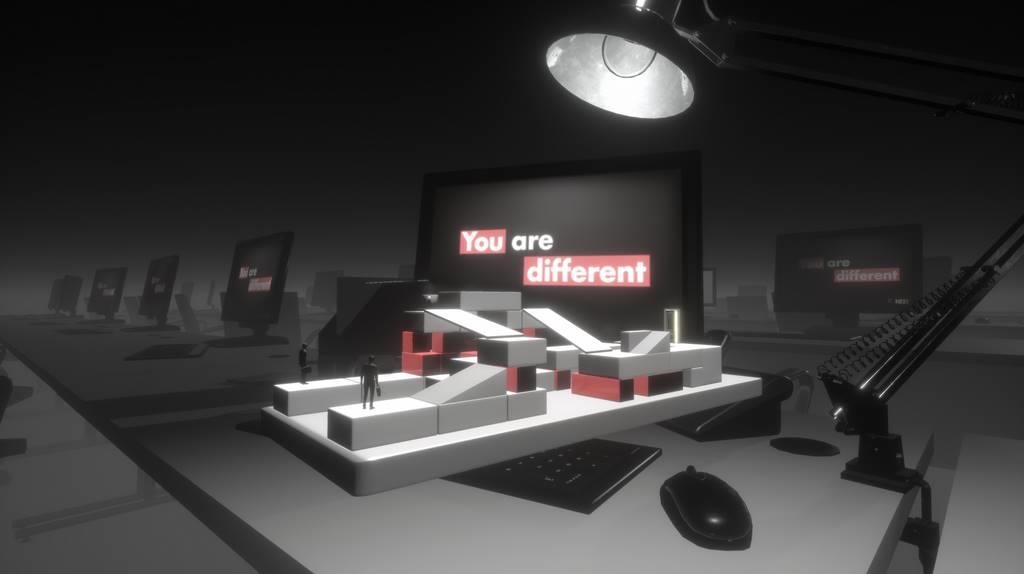 The game is divided into six chapters, each with ten primary puzzles and a number of optional puzzles, making this a pretty meaty game for the money. There must be at least 80 or 90 puzzles to solve. Some can be solved in moments, but as the chapters advance, the puzzles take on Rube Goldberg-ian levels of complexity. Towards the end of Salary Man Escape, I found myself gasping in a mixture of horror and admiration as giant, diabolically complex puzzles were revealed. Eventually, all of the mechanics in the game are combined to create brick monstrosities. Defeating these puzzles brought cheers of triumph from me and my son (who often helps me with puzzle games; two minds are better than one). There was a sense of deep satisfaction when bricks slid into place and the Salary Man was able to move forward.

It must sound like I really dug Salary Man (and conceptually, I did). But I have some pretty major reservations that prevent me from fully recommending this game. Mechanically, Salary Man Escape just doesn’t work that well. 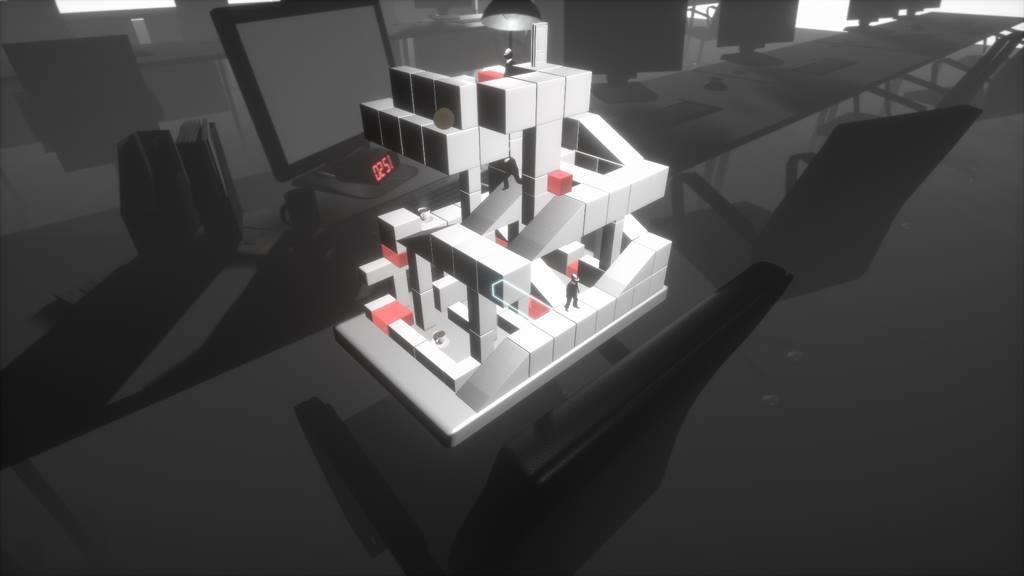 Players can use either one Move Controller or a Duel Shock to play Salary Man Escape, but both methods leave a bit to be desired. The Duel Shock just felt clunky, and manipulating the angle at which I could view the puzzle with a thumb-stick never felt precise. I ended up going with the Move Controller, but that wasn’t too great either. With the Move Controller, players can press the thumb button to grab and spin the entire puzzle to examine it from different angles. But somehow, it just never seemed to end up where I wanted it. I found myself standing up and physically moving to get the angle I needed, which felt unnecessary.

Further, the act of grabbing a red block and moving it is imprecise and inconsistent. Often. The blocks would lock in place, or slide in unexpected ways, causing a fail-state that felt unfair. I was forced to do each puzzle several times when the game behaved in ways that felt…wrong. There were times that, to solve a puzzle, red blocks would have to be manipulated around the edge of a puzzle and placed elsewhere, but each time I tried, gravity would grab the block and slowly pull it into the abyss, resulting is a frustrating loss. It seemed that, in order to get the puzzles to work correctly, the developers needed to have certain physics properties at work, but as a result the red blocks are subject to the same physics, which ruins everything. Oftentimes, that feeling of triumph that I mentioned above came at the moment that I finally wrestled a block into place, as opposed to the “Aha!” moment when I realized how to solve a puzzle. There is no way that a puzzle game should be this difficult to manipulate. I found myself wondering why this game is in VR, when it might have been a smoother and less frustrating experience if it had been conceived as a standard format game. 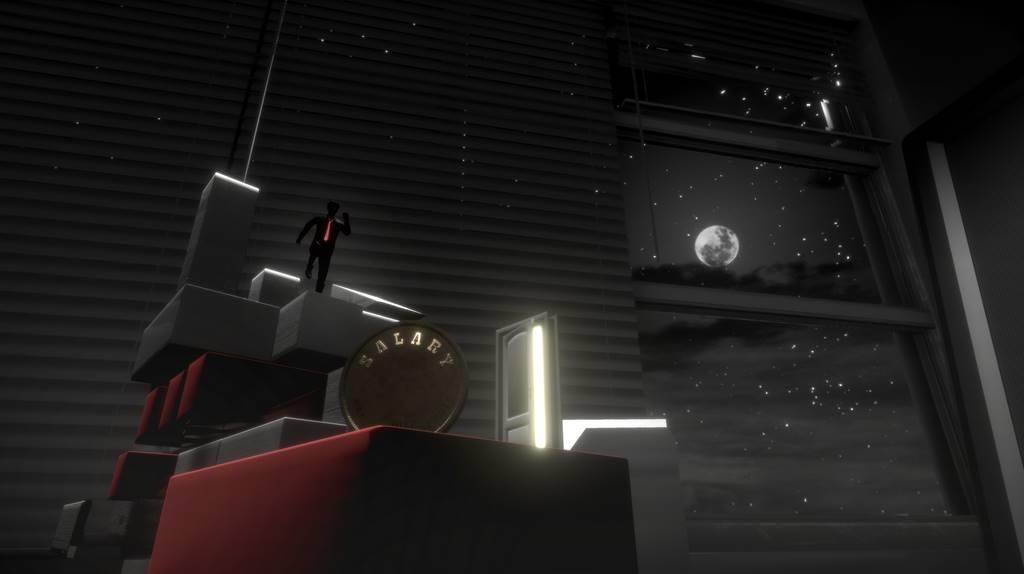 I also hated the timer. When the player can simply pause the game to examine the puzzle, what is the point? Beyond getting on my nerves and ramping up the frustration level, that is. And that chirpy music? Fun for a while, abysmal when the irritation level starts rising.

Salary Man Escape is worth a look for its weird and unique aesthetic choices, and its cool puzzle design. As I mentioned, the puzzles themselves are really well done, and they tickle the brain in new and interesting ways. Just go in with your eyes open, understanding that mechanically, this is a game that simply does not function in the way you might expect it to function. And ultimately, that lack of polish wears down on the nerves, resulting in Salary Man Escape feeling like work instead of fun.

With a unique presentation unlike anything I’ve seen before in gaming, Salary Man Escape creates its own singular vision of workplace hell. But with frustrating controls and a bordering-on-broken physics model, the stellar puzzle design is lost in a mire of irritation and exasperation. If I wanted to feel stressed, I would just go to work.