Written by Eric Hauter on 7/23/2018 for SWI
More On: Wolfenstein II: The New Colossus

I wasn’t quite sure what to expect when I clicked the Start button on Wolfenstein II. I went into Wolfenstein II: The New Colossus cold, having never played a Wolfenstein title. Sure, I purchased the first modern Wolfenstein title on sale for five bucks a few years ago, but I never actually played the thing. Come on. Play the games I purchase? Who are we kidding here?

So, my excursion into the alternate-universe Nazi-occupied America on the Nintendo Switch was my first real experience walking in the shoes of series hero B.J. Blazkowicz. What did I think? I’m going to cut right to the chase here. 1) Wolfenstein is crazy fun. 2) B.J. Blazkowicz is an awesome lead character. 3) I can’t believe the Switch is capable of running this thing. Wolfenstein II is a sprawling epic of a game, with a campaign that can easily take 25 to 30 hours for pokey players like me. Jamming this whole thing onto the Switch is a major achievement.

I wasn’t initially sold on Wolfenstein II. I’m not a big first-person shooter guy, and I can count the number of FPS campaigns that I’ve actually beaten on the fingers of one hand. The initial levels, which have Blazkowicz stomping around in the bowels of various airships and submersibles, did not do a lot to draw me in. Running down same-y-looking industrial corridors, crawling through ventilation shafts, shooting Nazis with some pretty run-of-the-mill weaponry, all of this had me itching to put down the controller and play something else. Sure, the cutscenes were nuts (more on this in a bit), but the gameplay seemed so…standard. And I really didn’t have any emotional connection to the series’ characters, so beyond the audacity with which some of them are handled in the game’s opening hours, I was essentially just watching the continuing adventures of strangers. It was like sitting down to watch the third season of Breaking Bad, having never watched the first two. I understood that the events I was witnessing were important, but I lacked the context as to why.

But a few hours into The New Colossus, when Blazkowicz heads to a bombed-out New York City in an attempt to make contact between his group and a resistance cell there, the game completely opened up to me and things started clicking in a big, big way. I realized that I had gained the character knowledge I needed through cut scenes and emergent storytelling, I had a good grasp on the major characters, and I was suddenly invested in the outcome of B.J.’s mission. The combat level design opened up some, I was able to start modding my weapons, the environments were more interesting, everything about the game just slid into place and started propelling me forward. It was like cresting the first big hill on a roller coaster and realizing that you were going over the edge now, so you might as well sit back and enjoy it. It didn’t hurt that the post-nuclear version of New York in Wolfenstein II is strongly reminiscent of the apocalyptic wastes of the Fallout series, which is pretty much catnip for my brain. 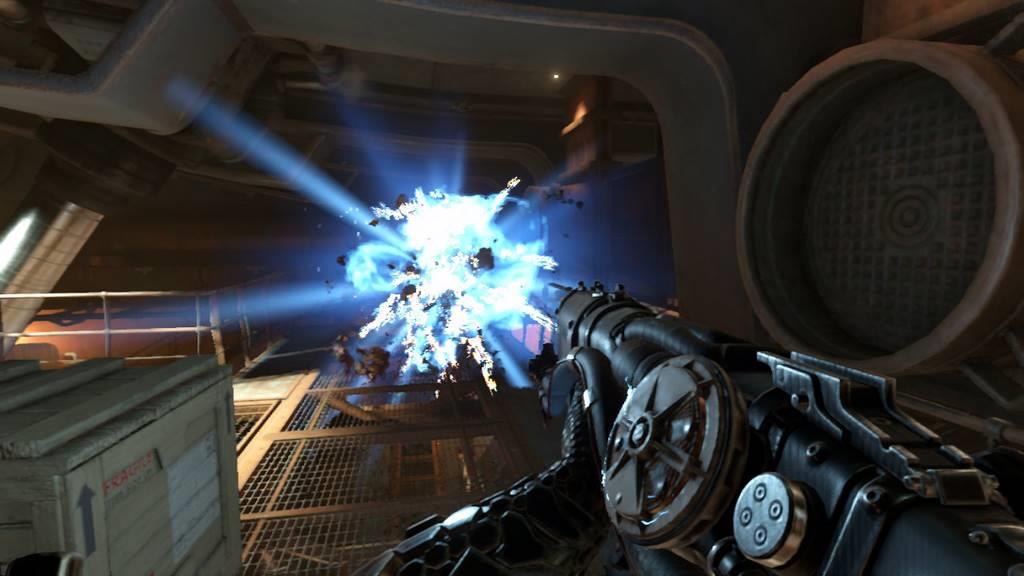 From that point on, I was all in. As the game moved from New York City into America’s post-war South, I found myself gasping at the boldness of the storytelling. This is not a game that shies away from the uglier side of the United States, somehow finding a way to contrast the seedy underbelly of our collective history with the parts of our mythos that still strike brave and true. While I have seen a lot of chances taken in this regard in recent years (Mafia III comes to mind), I was still in awe at the ballsy-ness on display in Wolfenstein (as well as a hilarious takedown of the time-honored American practice of referring to things that are tough as “ballsy”).

The cut scenes that deliver the major story beats are nothing short of extraordinary. At first, I thought that I was watching scenes that were staged and filmed as well as any Hollywood film. But then, after I reached a point in the story that included many of Wolfenstein’s supporting characters, I realized that I was seeing dialogue delivered in a naturalistic manner that was superior to most major films. The way these characters speak, move, and inhabit the space they are in lends a realism to the game that only serves to raise the stakes and sell the Wolfenstein universe.

So yes, I agree with the rest of gaming culture, this bombastic game is great fun to play. Being a Wolfenstein noob, I started out on the easiest difficulty setting. This had me running around like Superman, with bullets bouncing harmlessly off me as I ran headlong into rooms of enemies, carelessly spraying lead in every direction. Before long, this dynamic seemed at odds with Blazkowicz’s constant mutterings about how he feels like he “ain’t gonna make it,” so I cranked the difficulty up to normal, which felt about right. For a time, I ran around trying to dispatch every enemy I came across with melee takedowns, but running headlong into one of Wolfenstein’s robotic bosses rid me of that lunatic idea. 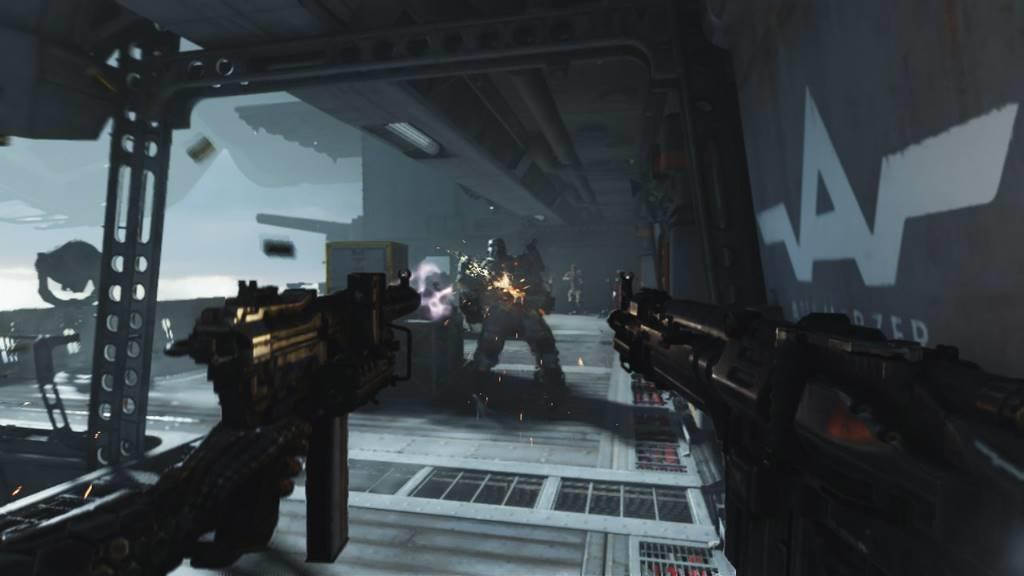 I did enjoy the way the game delivers skill boosts to players based on how they are playing. Rather than giving players a skill tree to deposit points into, Wolfenstein II simply notices the way you are playing, and then delivers appropriate perks and buffs. During my hatchet-murder marathon, for example, the game gave me specific permanent buffs based on how many enemies I killed in that manner. Killing a bunch of dudes while duel-wielding, for example, gains you additional ammo carrying capacity. Smart and easy, this dynamic subtly encourages players to try out new combat techniques that they might have otherwise ignored.

The weapon variety expands pretty quickly after those opening hours, and I had a grand time experimenting with different combinations. I also got a kick out of how you can pick up heavy weapons from defeated bosses and run around wrecking shop with laser beams and flame throwers. Combat in Wolfenstein is just flat-out fun, and I spent most of my play time sadistically cackling to myself about the horrible pain I was unleashing on the Nazi horde.

As I mentioned above, I have never played a Wolfenstein title, so I’m not particularly qualified to speak to how well the game plays on Switch compared to some of the system’s beefier contemporaries. But even without a point of comparison, I can say that Wolfenstein II: The New Colossus runs smooth like butter on the Nintendo Switch. However, the experience is not without its hiccups. There are tradeoffs, depending on whether you want to play the game in handheld or docked. Both modes have their perks, but neither is perfect. 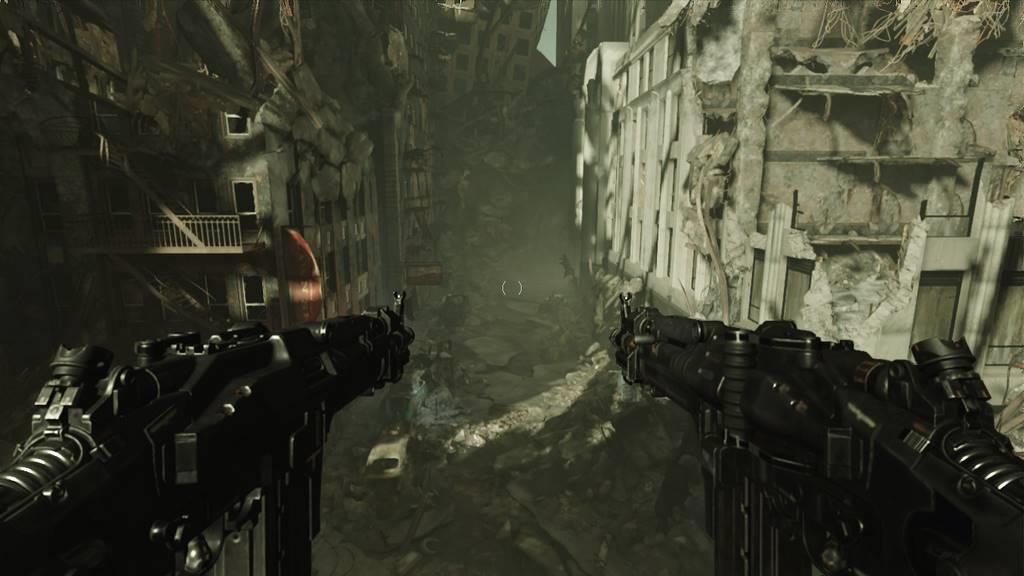 In handheld mode, you obviously gain the ability to take this fantastic game on the go. Wolfenstein II looks crisp and sharp, but having everything packed onto the tiny Switch screen, you do miss out on quite a bit of the detail that is packed into the game. Additionally, it is far easier to slide right past pickups and ammo when they are represented by tiny icons on the screen. I also want to take a moment and issue an official grievance with game developers regarding font size on the Switch. A font that is perfectly acceptable on a 55” 4K television can be absolutely illegible on a Switch in handheld mode. That’s all well and good when the dialog is in English, but when people start spouting off in German and I can’t read the subtitles, we have a problem. Come on, guys. Give my old-man eyes a break.

In docked mode, Wolfenstein II looks fantastic, with a solid framerate and smooth animations. It was only after playing for a while that I noticed that the textures looked a little fuzzy. I want to clearly state that this is not a deal breaker by any means, but for those that are really picky about their visuals, it is worth noting. A small amount of visual fidelity seems to have been traded for the smooth framerate, which I consider to be absolutely acceptable. Overall, the game looks great, far better than I would have thought Nintendo’s little system was capable of. Panic Button, the company that handled the port, have some serious tricks up their sleeves.

Whether played in handheld mode or docked, Wolfenstein II is a wild ride through a fantastic science-fiction alternate universe, delivering thrills and laughs, while still not being afraid to kick your legs out from underneath you with a sudden emotional moment. Listening to resistance leader Grace Walker’s first-hand account of the nuclear attack on New York City, I was caught totally of guard when I realized that I was having an bona-fide emotional response the likes of which I haven’t experienced since Spec Ops: The Line. With gonzo combat, amazing enemy and level design, and an engaging story, Wolfenstein II is worth sticking with through its slower opening hours. Of course, series veterans already know this, but newcomers like myself should not be discouraged from launching into this newer game without having played the first. Speaking of which, I have that first game downloading as I write this. It’s going to be a rainy day, and I’ve got a bit of catching up to do.

Wolfenstein II: The New Colossus plays great on the Nintendo Switch, though if you have a chance to play the game docked, it is definitely the way to go. But either way, New Colossus is an amazing game, with a rich universe, gonzo cinematic storytelling, and great-feeling combat. Not having played the first title is no reason not to jump into Wolfenstein II, and the Switch is a completely viable way to experience the touching lunacy of this series. Highly recommended.