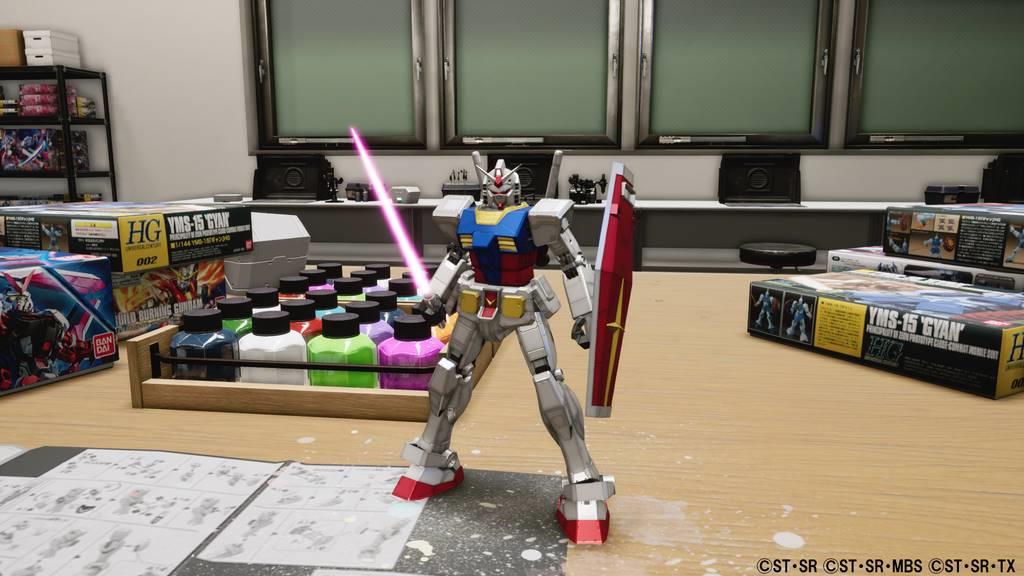 It is rare that I am at a loss for words when it comes to describing a game.

But in its hollow emptiness, New Gundam Breaker has left my mind a void – an echo chamber of Japanese butt-pop, blinding but meaningless special effects, and 1998 demo-disc graphics. Playing New Gundam Breaker, I simply cannot comprehend what I am looking at. What is this game? Is it even a game at all? What is it supposed to be? How did a concept as awesome as “build robots and take them into battle against each other” go so horribly, dramatically wrong?

Right out of the gate, I could see that something was utterly wrong with New Gundam Breaker. Attempting to muddle through the start of the single player campaign, I noticed that the edges of the screen were cut off. The lines of text and UI bits around the borders of the image were severed, rendering many of the options and UI prompts incomprehensible. This is not unusual when starting a new game. A simple trip to the options menu to adjust the image parameters typically clears things up. But I was stunned to find that there was no options menu in the pause screen. For a time, I was actually unable to pause the game at all. In fact, players actually have to leave the campaign completely and exit to the starting menu to reach an options screen, and after 10 minutes of disbelieving fiddling, I was forced to concede that there simply is no option in the game to adjust the image ratio. The only way to play New Gundam Breaker is with the video feed cut off on all sides. This is exacerbated by the fact that the font used in the game is tiny, so entire lines of text and prompts could be missing, and players would never know. In fact, I don’t know what I don’t know, if that makes any sense.

This issue is minimally distracting during battle missions, but a large focus of the game is the creation, editing and coloring of your Gunpla, which is accomplished via a very complicated and unintuitive system of menus. In this menu system, having the top and side edges cut off of the image takes a complex UI and renders it outright bewildering. In a game heavily dependent on menus, New Gundam Breaker was already neck deep in problems, and I had barely begun. 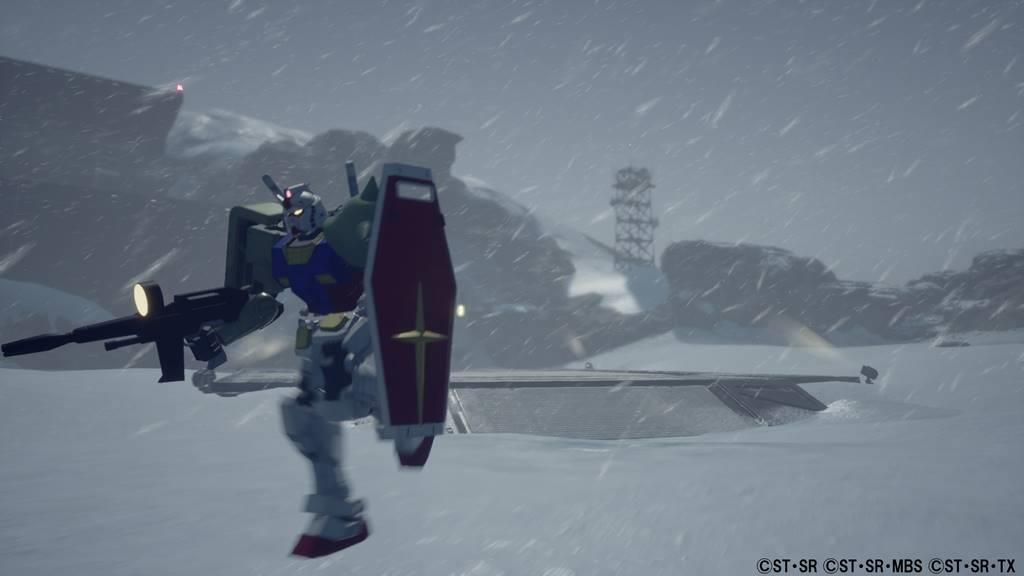 There is a story of sorts framing the gameplay of New Gundam Breaker. Players begin the story as a transfer student, newly arrived at a high school that seems to be totally committed to the building, refinement and battling of Gunpla (for the uninitiated, these are basically awesome Voltron-style robots). A basic visual-novel style story plays out between the player and the students at the school, but the storyline is primarily set dressing used to move the player from one battle to the next. As much as I abhor such behavior, I quickly found myself liberally smashing the “skip” button to get past the irritating and chatty story sections.

I don’t know why I was in a hurry to get to the action portion of the game though, because the battle system in New Gundam Breaker is absolutely incomprehensible. Matches are played in a 3 v 3 format with both teams (all characters besides you are controlled by the CPU) entering arenas dressed to look like areas of the school. In addition to the two teams, the floor is almost always littered with computer-controlled crap-bots (my term, not the game’s) that delight in chasing you down from behind and knocking you flat on your back, where you remain for 3 – 5 seconds. Crap-bots swarm you wherever you go, making moving about the battlefield virtually impossible. Whacking crap-bots causes Gunpla parts to fall off of them, which you can run around and collect (when the game notices that you are trying to pick them up). However, you do not get to keep these Gunpla parts to add them to your robot unless you break off from the flow of the battle and deposit them into a specific crate. Plot-twist: The crate moves randomly around the battlefield, and crap-bots can knock parts you have collected out of your hands. So, have fun with that. 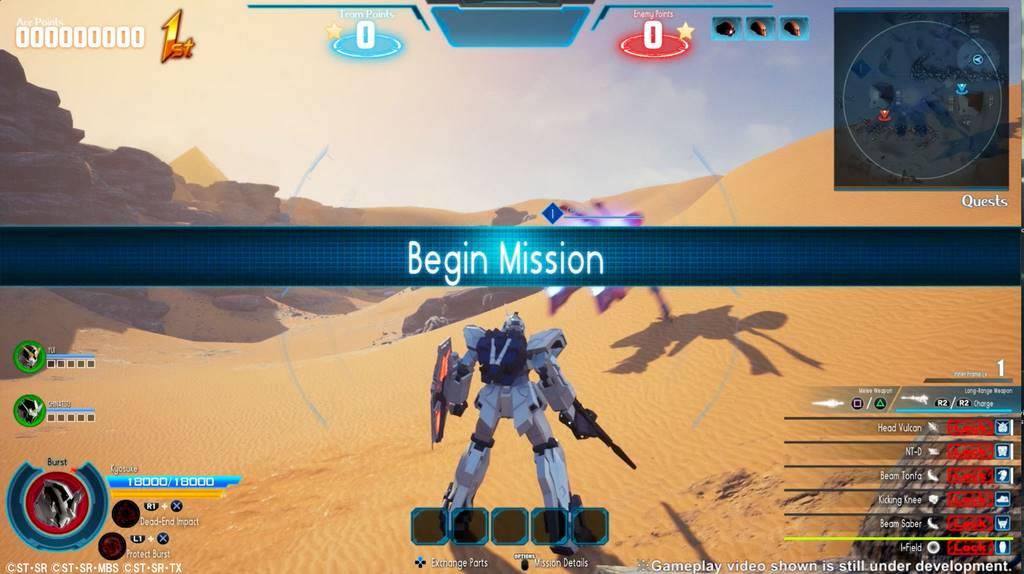 Instead of battling each other, teams are tasked with completing “quests”, which are little tasks that pop up during the course of the timed battle. Quests include such scintillating instructions as “break 10 containers”, “kill a dude”, and “collect this one specific piece of armor from a giant field literally covered in pieces of armor with no indication of which one it is and then get it to the stupid moving crate”. Any member of your team can complete a quest, so I found that quests came and went very quickly while I was busy laying on my back, swearing at the crap-bots.

All of this plays out in the most chaotic manner possible, with lighting effects whizzing around and turbo-boosters turbo-boosting in every direction. I often found myself completely turned around, trying to rid myself of the mosquito-like crap-bots while quests were announced and quickly accomplished by my computer team-mates. There is a lock-on that seems to randomly lock-on to crap-bots, removing your camera control and spinning you in whatever direction that enemy happens to be running. This all reminded me of the PS1 classic Demolition Derby, where any progress could be quickly thwarted by random attacks from the side, wild changes in camera angle, and sudden un-preventable death. Additionally, New Gundam Breaker’s visuals aren’t much better than that 1995 classic, and frankly, Demolition Derby was much more technically stable than New Gundam Breaker. Did I mention that the action freezes at least once a minute, with the framerate locking up for 2-3 seconds at a time? 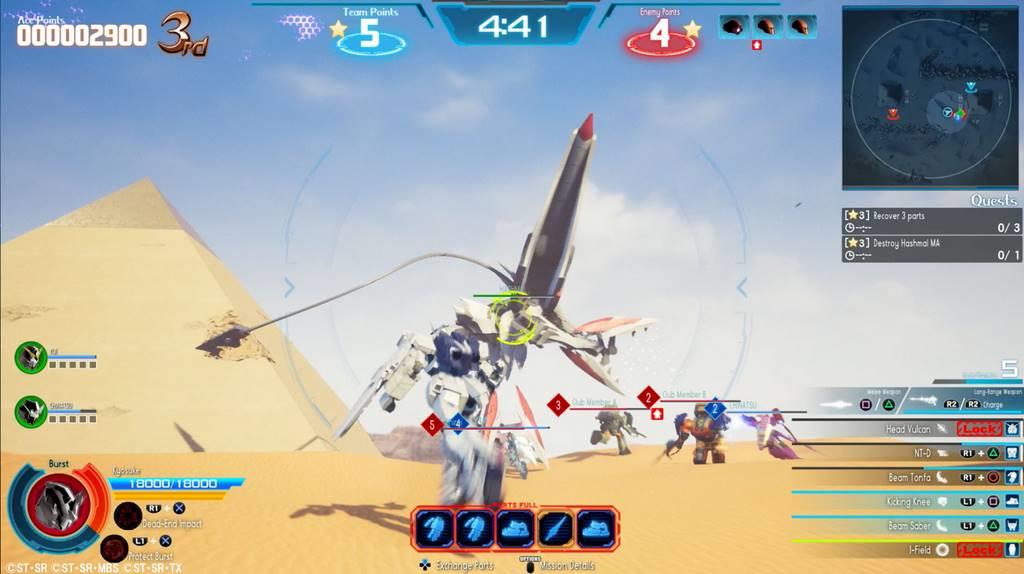 The one area of the game that I did enjoy on some level was the Gunpla-building interface, which allows you to take any parts that you manage to salvage in battle and use them to customize your robot. It took me a while to figure out how to get to this interface, though, as you have to quit story mode to enter editing mode, then reload story mode to see your changes reflected in the story battles. Clunk, clunk. While this editing interface was largely unintelligible, with large sections not visible due to the screen being cut off, I still managed to fumble about until I figured out how to customize my guy. I actually liked adding pieces to and painting my model, and there is a fun goofball feature called “Admire your Gunpla”, where you can take your robot and pose him in various action poses, superimposed over cruddy backgrounds. It is silly and fun.

Of course, editing the pieces of your robot alters a variety of stats, none of which have any sort of explanation in the game. This renders changes made largely meaningless, and I found myself defaulting to a “Higher numbers are better” system. Different Gunpla pieces also grant different special powers that can be unlocked in battle, but due to the uncontrollable nature of battle, I found these to be inconsequential as well. Trying to pull of special moves usually just sent me careening into a wall. 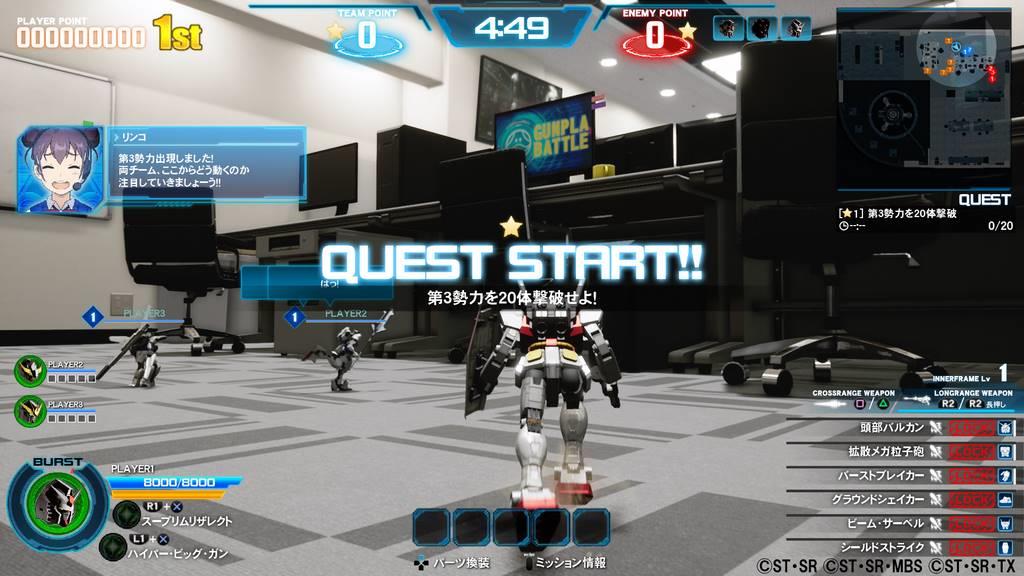 New Gundam Breaker also contains an online 3 v 3 co-op mode. But try as I might to get online during what I consider to be peak hours, I could not get into a battle. My 15-year-old routinely mocked me as I sat and watched the match-maker spin, making comments like “There are not even six people in the world that want to play this game!” At one point, I joined the team of some poor soul who had messaged “Plz help team for trophy!”. After sitting on his team of three for fifteen minutes waiting for a challenger to emerge, I sighed and bailed. Like everything else in New Gundam Breaker, online multiplayer is a complete loss.

I can’t imagine what sort of player might enjoy New Gundam Breaker. Even folks that are completely committed to the Gundam franchise will be at a loss as to how to get any pleasure from this swamp of a a game. I’m not even certain that it’s fair to call New Gundam Breaker a game. It is more a collection of random features that are glued together, like a Frankenstein body assembled from broken body parts that has never had electricity pumped into it. This would have been a bad game back in the PS2 era. In our current day and age, New Gundam Breaker is an aberration, an ugly mutant of a game, a squalling orc baby born with its organs outside its body. Fans and the franchise-curious alike should avoid this game at all costs. Avoid going into stores selling this game. Avoid entering cities where this game exists. Stay far, far away from this game.

New Gundam Breaker is such a bad game that it makes me feel bad for Gundam fans. I picture a 12-year-old Gundam fanatic that has saved up weeks’ worth of lawnmowing mowing money, sitting with a controller hanging loosely in her hand, staring at the screen and crying. This is a game that should never have come to market, regardless of how much hard work went into its creation. To ask anyone to pay money for New Gundam Breaker is outright offensive.