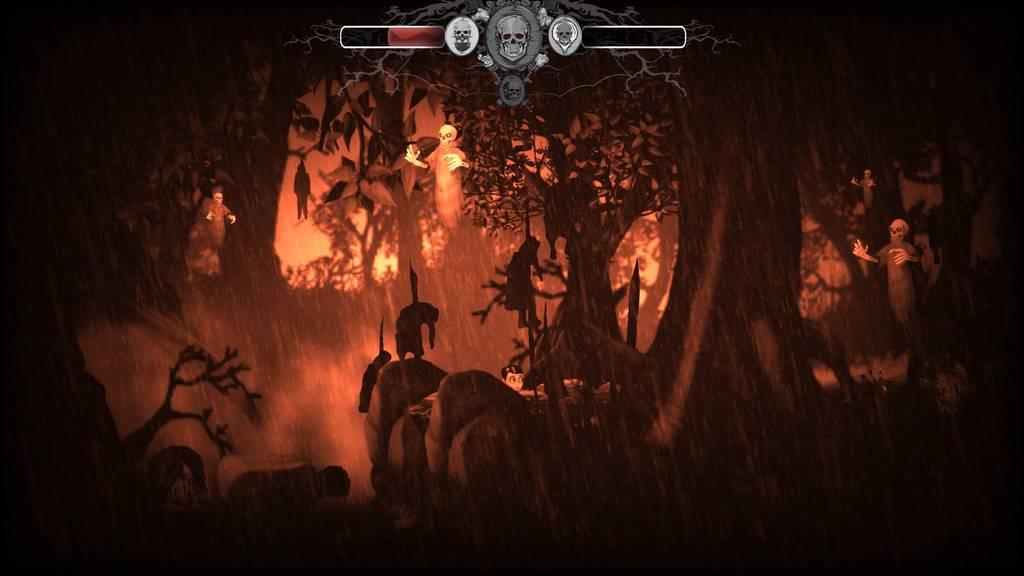 From the beginning, I was skeptical of what Dream Alone claimed to be—and honestly, skeptical of anything calling itself a horror platformer (though games like Inside are working to change my opinion). Platformers by nature require a great deal of focus on the platforming and movement itself, while horror games conversely require you to focus more on the experience and environment for major fear factor, or at least major creep-out factor. From the trailer, I was concerned about how the gameplay would execute itself, mainly because with all the foreground obstructions and obnoxiously dark filters I could barely see what was going on at times. Unfortunately, my concerns were justified; upon actually playing the game, I found my focus drawn to all the wrong places, which when paired with the odd mechanics and frustrating controls makes Dream Alone fall short of what it was trying to be.

The premise of the game, relayed to you by a very not-scary narrator, is that a town has fallen victim to a mysterious plague, and save for a single resident—a young boy—everyone has fallen into a coma. This young boy—who, by the way, absolutely sounds like a full-on teenager—must then go on a perilous journey to find Lady Death and beg her to restore his town. My first problem with this plot was that it was very basic, and basic plots are stupidly easy to overuse if you don’t add twists and unique elements to make it your own. This one was just “sole survivor, perilous journey, rescue everyone” and I didn’t even have to dig deep into what I was given to get to that realization. It’s just the entire premise of the game. Coming from a background of psychological horror and delightfully complication storylines, I felt almost let down that I got nothing more plotwise than I saw in the trailer.

The game itself looks like the trailer does, which isn’t great. I’d hoped that the flickering screen, constant obstructions, and oppressively dark edges were just to create a higher sense of horror in the compressed amount of time allowed by a trailer, and that the game itself would be easier to navigate. Unfortunately not. My affectionate name for this game while I was reviewing it was “Epilepsy Land” because, while not as severe as the effects in, say, Incredibles 2, the eye strain was real, and I’m genuinely glad that I do not suffer from epilepsy (though they did place a warning at the beginning of the game, which was a great move). The screen kept going black, as if someone was watching this boy from afar and blinking obnoxiously frequently, and the black edges of the screen just wouldn’t stay still. Not only was this distracting, it was impairing. (Not to mention the fact that, since the various settings in the game had much the same vibe, that this impairment continued across pretty much the whole game.) 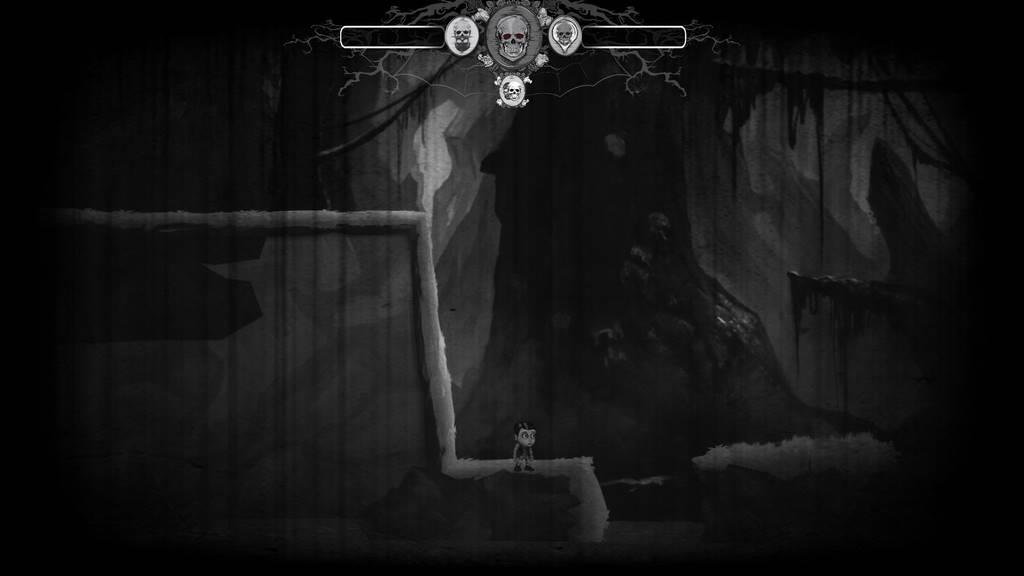 The various effects and foreground obstructions also affect gameplay itself on a programming level, and not just with user error. It’s incredibly difficult to see the traps on the ground (plain bear traps, oddly enough). It’s hard to time the enemies when they move behind trees, especially since they’re different sizes and you die if you miss the jump by 0.3 millimeters. And sometimes you can’t really tell if that dark thing in front of you is just ground or a pit filled with nasty spikes. The only way to tell is to jump it to be safe, and if you miss—which you do frequently, because the width of the hole is usually at the very end of the boy’s finicky jump range—then you know “Oh, hey, that thing is a pit.”

This issue with visibility is actually the main reason that I wouldn’t call it a horror game. I personally spent so much of my focus trying to see traps and enemies through all the distractions that I missed out on a lot of the ambience—soundtrack, background, and all that. I wasn’t able to experience the intended horror fully, mainly because I was required to devote too much of my energy toward seeing past what I can only describe as twelve creepy Snapchat filters layered on top of each other. The only time I really felt unnerved (not afraid, not horrified, but unnerved) was when I died, and that was only because I hadn’t seen it coming—not because I’d been ambushed or anything, but because I couldn’t see the bear trap hidden behind the grass and trees (and, since the game is mostly monochrome, it makes it even harder to see tiny traps). This, however, was a jumpscare. I want to take this moment to remind developers as a whole what many seem to have forgotten; jumpscares are not true horror, which has so many more complicated elements behind it. Jumpscares are just jumpscares. 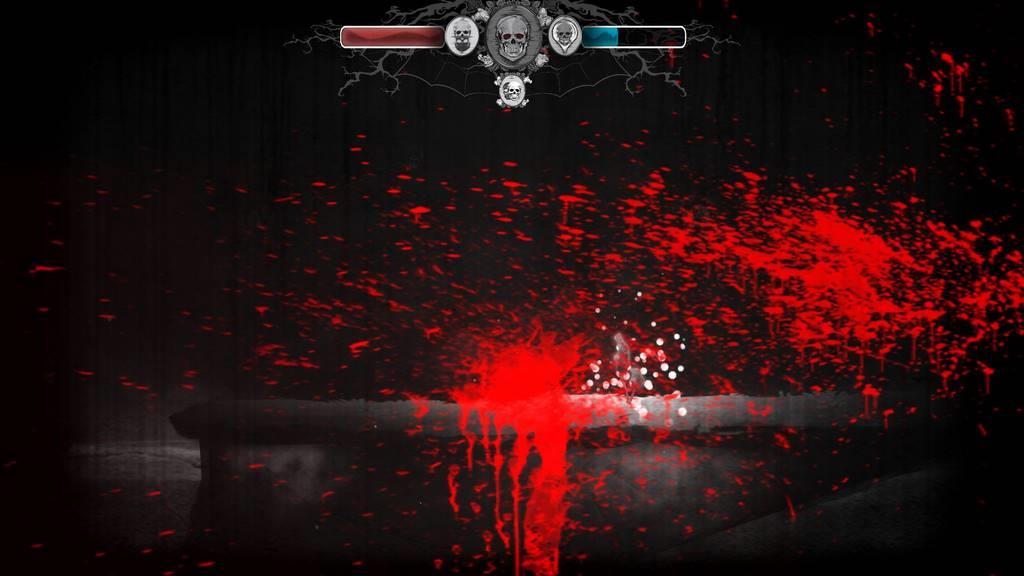 The mechanics themselves are…interesting, and though I didn’t like them as a whole it is here that the game’s most promising element lies. To get the rest out of the way, though, it bears mentioning that movement in this game is frustrating. You can’t keybind, and the default controls seem to combine WASD and arrow key movement sets (mainly with jumping) which, to me at least, is infuriating. Jumping sends you floating up into the air like a feather. Pushing objects is painfully slow, and not all the distances you have to push them are short. There are fairly long periods where you just do nothing other than run, which isn’t very fast in and of itself.

The game’s aforementioned most promising element wasn’t a success in and of itself, but it came very, very close. You find little vials of a mysterious liquid along his journey that, when consumed, fill up a little bar at the top. When you reach a dead end or an impassable obstacle, you may hit a button to cross over into a parallel dimension and pass where the obstacle used to be. In all ways, this dimension is scarier than the first one. The ambience changes to sepia. The screen shakes. You hear a constant, dull roar. Gnarled hands are frozen in the act of clawing their way up through the earth. You’re on a timetable, because when your meter at the top runs out you’re forced back into the first dimension whether you like it or not, which more often than not results in a gruesome death. 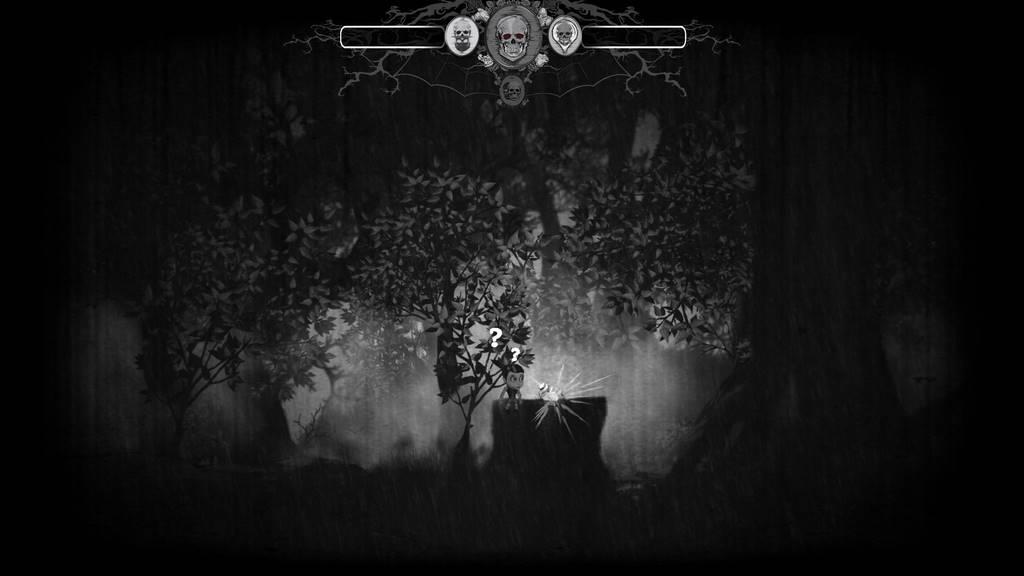 This dimension-switching was, unfortunately, bogged down by some crippling flaws. First, it’s sometimes difficult to tell when you’re meant to switch over. The game’s placement of those vials is pretty good about hinting to you that a switch is coming up, which I enjoyed. However, in some places I was unclear about where I was meant to be when performing the switch (primarily in areas with vertical travel) which led to a lot of quickly switching back and forth between dimensions and hoping that I would see the opening. This, of course, drains my meter, so by the time I actually figure out what I’m meant to do I barely have any juice left—and this game is very unforgiving with the interdimensional juice, as I came to call it. If you run out right before you need to use it again, tough. Most times you aren’t able to go back to where you got them because that journey involved dimension-switching, and even if you could the vials don’t respawn. This guesswork is frustrating in and of itself, but it can also undermine the entire foundation of the game.

I can tell that this game is meant to be a horror game. It has all the elements of the genre—darkness, difficult visibility, sudden deaths, blood, and monsters, to name a few. However, they aren’t executed in the right way. It’s too hard to see. The sudden deaths are unfair. The blood isn’t really unnerving. The monsters are frustrating, and even those meant to be the final boss of a level just involve three seconds of clever dodging and you’re through (where I was hoping for some sabotage—like, you would dodge at a crucial moment and it would stab itself or something). The game works a lot on the ambience (even though the best music was in the main menu), but it feels like it was slapped last minute into the platforming genre and as such misses out on a lot of the horror potential because it’s so hard to focus on both platforming and, you know, being terrified.

Dream Alone has a tired story, clunky controls, and flawed mechanics, and most of its problems can be traced to the near-fundamental incompatibility of this type of horror with this type of platforming. Its most promising aspect—multiple dimensions—is by far the creepiest part, which is enjoyable, but it seems to sabotage itself with a few key flaws that impact the entire game’s playability.