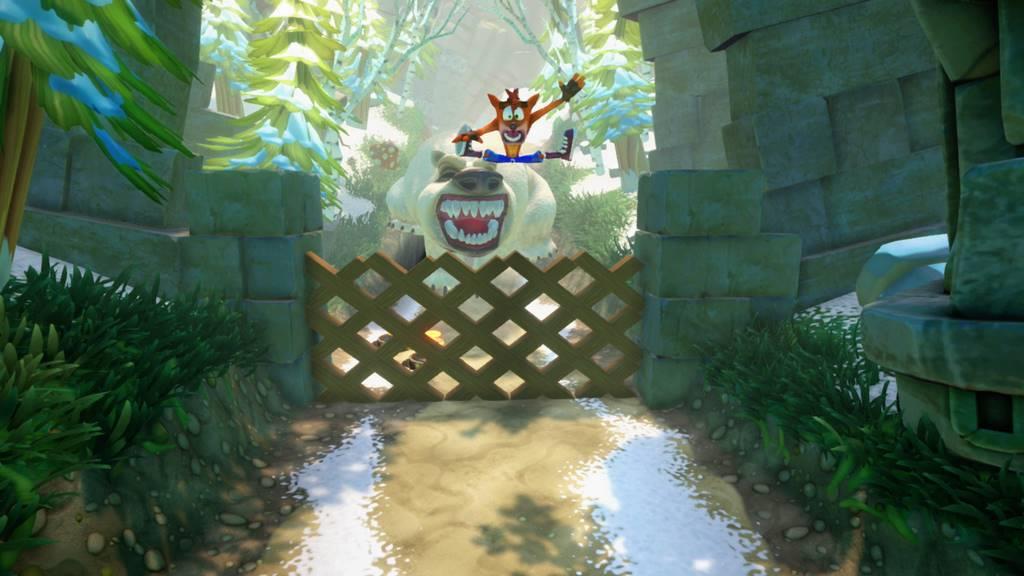 Written by Eric Hauter on 7/16/2018 for SWI
More On: Crash Bandicoot N.Sane Trilogy

I have been asking myself for two weeks how it would feel to pick up the Nintendo Switch and press “Start” on Crash Bandicoot for the first time, if I had never played the game before. What would Crash feel like to play if I were completely unfamiliar with the franchise? Or better still, what if the N Sane Trilogy were a brand new game created from scratch, rather than a painstaking remaster of a beloved trilogy from the PS One era? There are plenty of new platformers on the Switch. What if this were just some unknown game that I picked up for a few bucks as one of Switch’s weekly specials? How would the first Crash Bandicoot stand up if I were reviewing it cold?

I imagine that I would find the main character of the series to be a little charming, but I might be a bit put off by his strange bro-like ‘tude. I would probably be very impressed with the music and sound design, but irritated by the lack of a player-controlled camera. I would think that the level design was beautiful, if overly linear, but I would totally balk at the difficulty level. Crash Bandicoot games are crazy difficult. If I hadn’t played the games before, I might have bounced off of the first game in the series before I ever got to the far superior (and franchise-capping, in my opinion) second entry in the series.

But I’m not experiencing these titles for the first time, of course. I played and beat all three of the original Crash games during a mad sweep through the franchise with my oldest son in the early 2000’s. I went on to play the first couple of PS2 games too, just to be a freakshow completionist, though those were decidedly less than spectacular when compared to the original trilogy. Those load times are still memorable in their extravagance. Yikes. 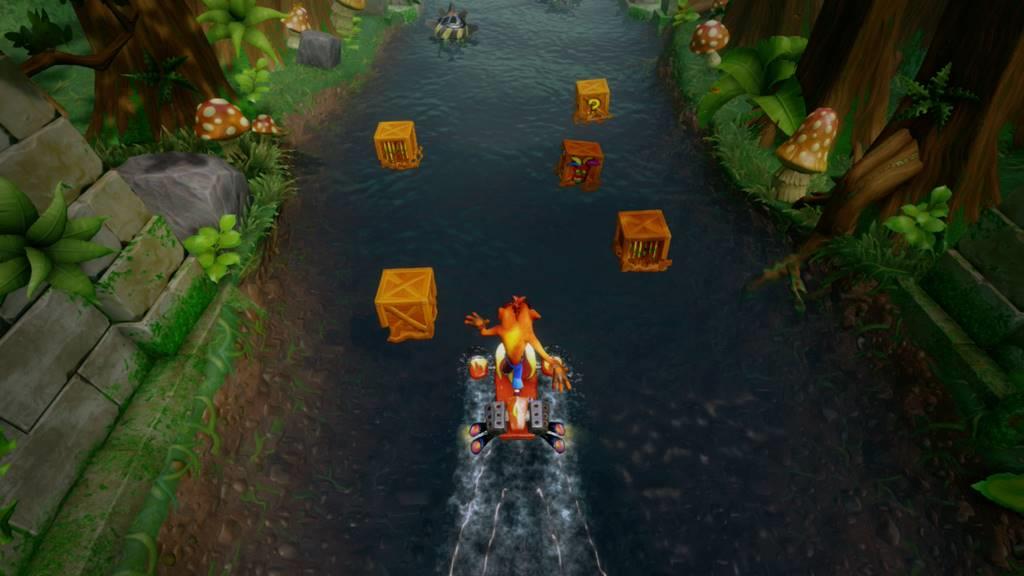 As a result of my marathon, I am all too familiar with the frustrations and joys of Crash, and I am happy to say that all of them are intact here on the Switch version of the N Sane Trilogy. Depth of field is still incredibly difficult to judge at first, but once you get your Crash-legs underneath you, things become a lot easier. Riding on the backs of animals is still wildly hard to control, and vehicles are insanely unpredictable. Luckily, muscle memory got me through quite a few of the challenges, but I must admit feeling some trepidation heading into certain levels. Jumping on that stupid motorized surfboard thing for the first time in Crash 2 was just flat-out nerve wracking. Stupid whirlpools.

For the uninitiated (there have to be a few out there), Crash games tend to alternate between several platforming dynamics. While Crash and his environments are rendered in 3D, there is no open-world exploration to speak of. Crash is usually either running away from or towards the camera through linear levels, jumping over obstacles, stomping on baddies, and breaking crates in search of goodies. Sometimes Crash runs from left to right along platforms, able to move forward and backwards slightly in depth, just to keep things interesting. Precision is the name of the game, and while the controls are tight once you are used to them, the challenge level in all of these games (especially the first one) is unforgiving. It is entirely possible to build up a bank of 10 or 20 lives, and then burn through them all attempting the same tough jump over and over again. Luckily, Crash has always had a fairly liberal checkpoint system, so you don’t lose all of your progress in the game when you hit the “Game Over” screen. You are typically just bumped back to the beginning of the level to try again with three new lives.

Every three or four levels, Crash runs up against a boss battle. Honestly, the bosses in Crash are often easier than the standard levels. Most of the time, defeating bosses simply comes down to picking up on what their pattern is, and then implementing a plan to beat them. 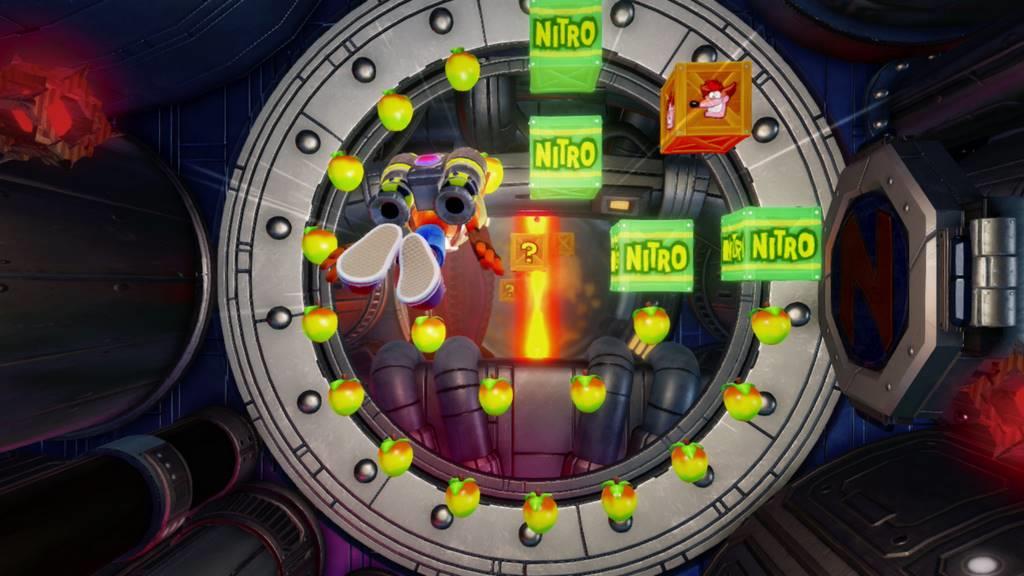 As you progress through the games, more dynamics come into play and the levels become more complicated. Animals and vehicles are introduced, and the levels take on a really great variety. As you master the controls, you find yourself pulling off almost inhuman jumps, cruising through levels that you recently thought impossible in a zen state of bliss. The learning curve is one of the most satisfying things about the Crash games.

I didn’t play the N Sane Trilogy on other systems, so I can’t compare the visuals on Switch to those presented on higher horse-power consoles. I can say that the game looks and performs like an idealized version of the way Crash exists in my memory. That is to say, it’s gorgeous. The graphics on the original games were revolutionary at the time, just stunningly good. In my memory, Crash exists as a great looking game, so when I play this version on the Switch and it looks great, that just feels correct. Crash is supposed to look good, so Crash looks good. The colors are brilliant, the animations are smooth, and the backgrounds are detailed. Never mind that the original Crash looks completely primitive by today’s standards. 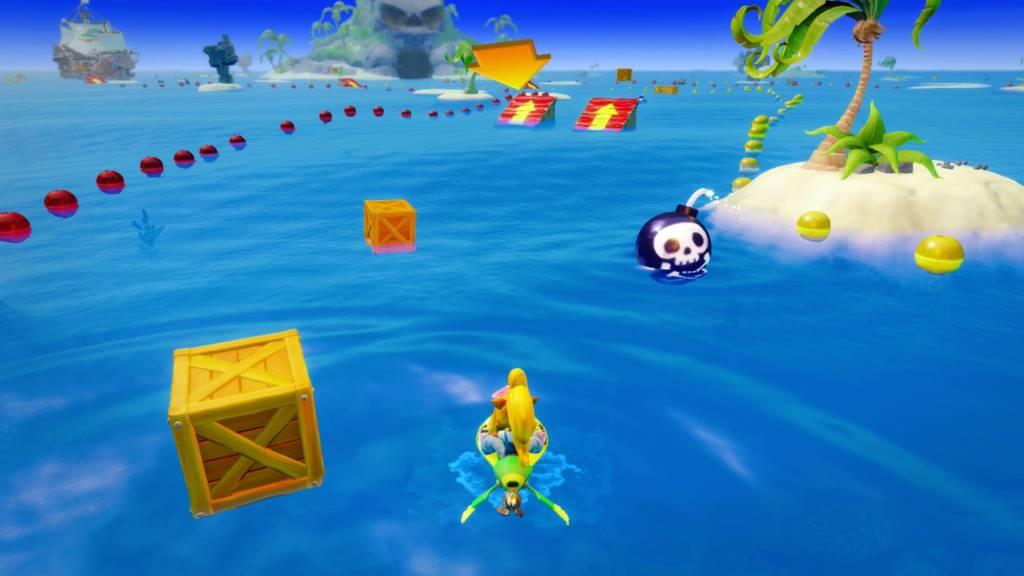 Looking back that the original versions of these games, the effect is kind of similar to what it feels like to go back and watch an early CG animated film. At the time it came out, the original Toy Story film looked amazing. And when Toy Story 3 came out years later, it looked amazing too, so when you think about the original film, you remember it looking as great as its sequels. But when you back and actually look at the thing, it looks barren and rudimentary compared to modern animated films. In the same way, the original Crash looks beautiful in my mind, so the new version looks the way my brain remembers Crash looking. Long story short – the developers did an amazing job remaking these games.

While it was a bit discordant to be playing Crash on a Nintendo system (he was, after all, the default Sony mascot for years), the game feels right at home on Switch. Being able to carry the entire Crash trilogy around with you is a great sensation. The levels in the game are all short enough to play in shorter sessions, so the game is primed for handheld gaming. The levels look great on the Switch’s built in screen, and the game plays well with the Joy Cons attached. 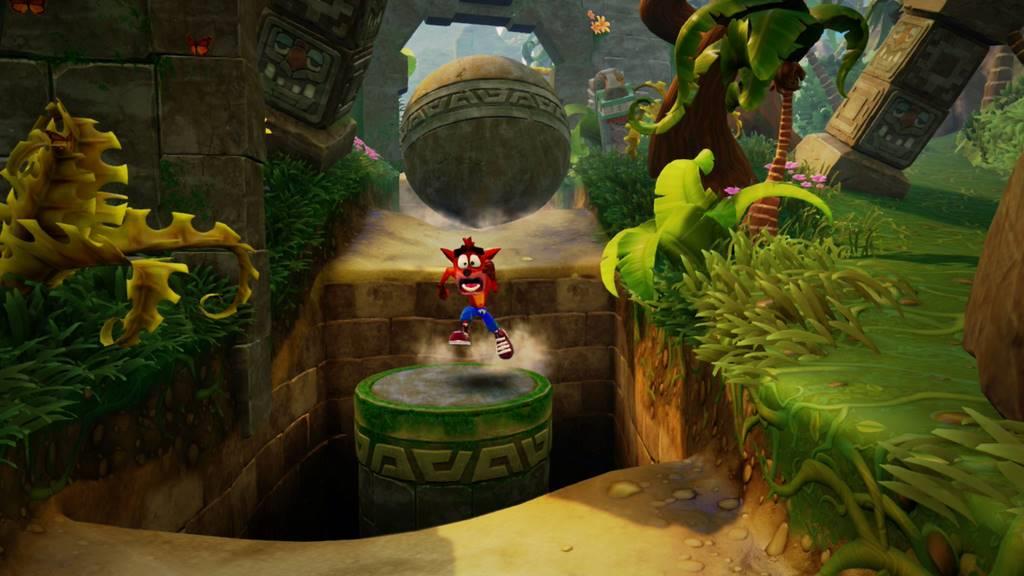 I did have one major issue with the N Sane Trilogy on Switch though and it might be a deal-breaker for some. When I docked the game to play it on my TV with a Pro Controller, I immediately noticed a bit of lag. Every move I made, every jump I attempted felt like it was happening maybe 1/8 of a second after I pressed the button. While this might not sound like a big deal, with a game that demands as much precision as Crash, this caused me a lot of grief. Before long, I noticed that the framerate seemed to be lower than it was in handheld mode, giving the game a slightly herky-jerky feeling. Needless to say, docked does not feel like the optimal way to play this game on the Switch. If you do pick it up, know that you are buying the game to play it in handheld mode.

But in handheld mode, Crash Bandicoot N Sane Trilogy is a resounding success. I am not a nostalgia gamer. I hoard my games, but I rarely go back and play through my older games in their entirety. But the beauty and challenge of Crash pulled me right back in, and for a little while there I felt like I had a lot less grey hair and I was sitting on the floor of my old apartment with my four-year-old son perched beside me, clamoring for his turn. I am so glad that I have this classic collection on a modern system. Everything about it just feels right, filling me with a warmth that I hadn’t realized I was missing.

Crash Bandicoot N Sane Trilogy give you a tremendous amount of bang for your buck. The three games contained within are long, detailed and beautiful, and they feel right at home on the Nintendo Switch. Just go in knowing that the modernization of Crash did nothing to scale back the games’ difficulty. These games will still wipe the floor with players, whittling away at their store of lives in no time. For those that played the Crash games back in the day, though, this is just part of the experience, and they will feel right at home taking Crash on his quest against the evil Cortex. While the game suffers in performance in docked mode, the pleasures gained in handheld mode more than make up for it. Even with the technical issues, this is a fine collection, and well worth the investment of both time and money.