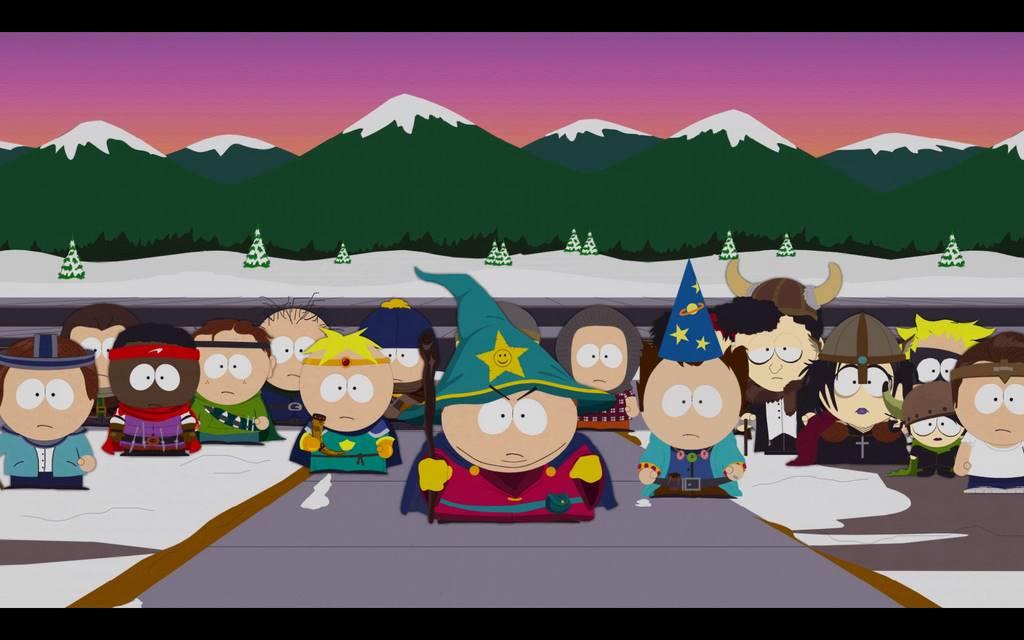 South Park: The Fractured But Whole

Written by Kevin O'Connell on 7/6/2018 for XBO
More On: South Park: The Fractured But Whole

South Park’s notoriety for their pushing-the-appropriate-envelope is well documented and with this game I believe they’ve actually toned it down a bit. Don’t get me wrong, the Fractured But Whole is still filled with enough disgusting innuendos and scenes that you’ll still keep the younger kiddies far from the screen, but Matt Stone and Trey Parker have kept their word on creating a game as much for the gameplay as the gag-play.

The game starts with you choosing your look and the difficulty. It doesn’t take long to see the first bit of ignorance as you have to choose your skin color to define the difficulty level – very white is easy, while very dark is impossible. From there it does become a rather good RPG game that you cannot help but get more out of than the previous game.

There is a plethora of class types available to you over the span of the game. You’ll start with one of three and then have the chance to dual and tri class by the time the game is half over. Herein lies the strategy that the player must contemplate. Do you take a bruiser and then add a long- distance fire class? Do you take a speed mogul and then opt for a mind control class? These differing classes become important when you start to get into the tougher fights because of the well-designed fight screen. Each class has 3 distinct (though sometimes too alike to other classes) attacks and a special attack. The three attacks have different directions that become useful in the grid. Some have area attacks that can hit all squares around you. Some hit everything in one row. These become more and more important as involved situational battles occur later in the game.

The player also gets to use almost the entire South Park cast as teammates by the time the game is over. You will almost always have 3 other characters at your side for battles and will be able to chose from a list of different sidekicks for each battle (eventually from the opposing faction as well). They are all there in costume form: Jimmy as "Fastpass", Kenny as "Mysterion", Kyle as the "Human Kite" to name a few. They all have fun-as-heck powers and their special attacks are not only devastating, but hysterically funny. Honestly, some of the best fights happen when you have to fight the other faction’s members. 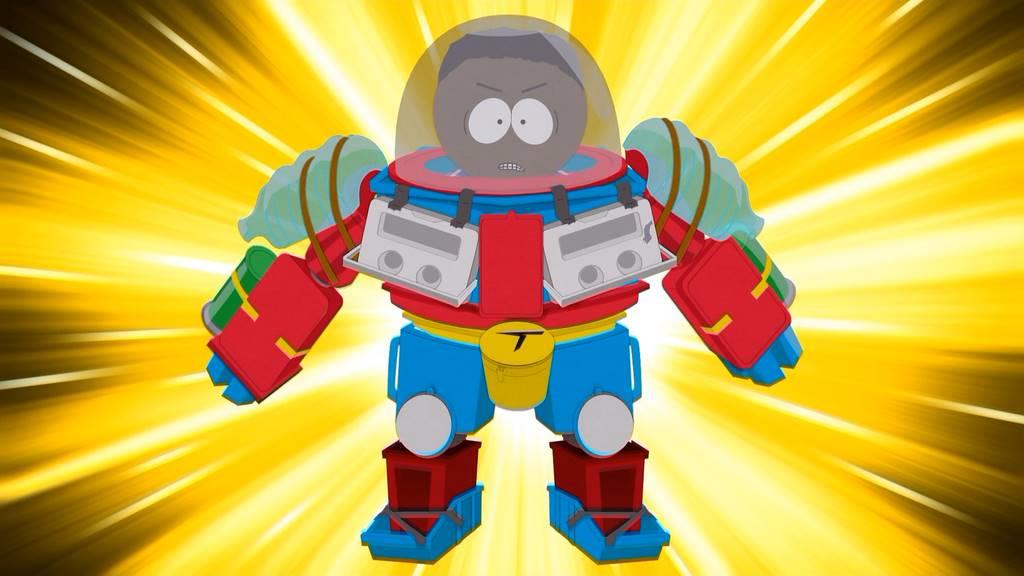 The fights happen either when you initialize a fight with a wandering group or when you reach  a storyline fight. The fight is typically 3v3 or 4v4 and most of the time starts with parties on both sides of the playing surface. The area is a 6x4 grid of squares that the player is able to move each team member around. The strategy becomes important when deciding how far to move, whether to defend, whether to get out of the way of an attack or even to retreat out of the way to heal. Some enemies have area attacks; some have long-distance; some have melee attacks and a few have a combination of these. Special attacks are available when the meter at the top of the screen reaches 100%. Each character and class have one special attack and they can affect everything from one enemy, to the entire board depending on which one is used. You can also decide which of your team gets to use it. Want the Coon’s (Cartman) claw attack that hurts every enemy and makes them bleed for further damage? Or rather have Super Craig’s hamster attack that does devastating damage to one enemy. You can do regular attacks with other teammates until you get to whichever team member's you want to use.

There is also a crafting system in which you are able to make consumables (healing), outfits, and artifacts. The junk that you pick up is unlike the last game where you just sold the stuff to the stores for money. Now you use the junk to craft all kinds of stuff. Healing takes the form of taco types of food and special drinks. Outfit recipes can be found, bought, or given. Artifacts take the most crafting and are pretty helpful. 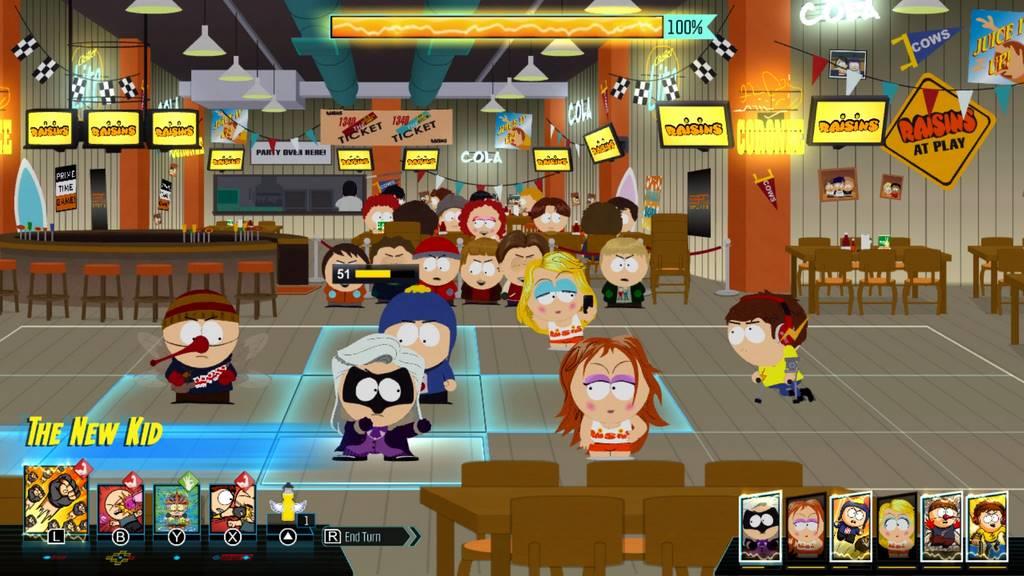 Artifacts are part of the biggest difference in battling from The Stick of Truth to this game. Like I’ve mentioned, they are found, given as a reward or can be bought from certain vendors. As the player levels up, they get a new artifact slot. You can get up to eight slots that can hold numbers from 30-100 points. The points are added together to give the total power rating of the player. Quests and enemies also carry the point totals to let you know if you are in the right place in the game. If you are a 435 and see a 600, you know you are either too far ahead or need to get better artifacts (maybe even forgot to apply them). I hardly ran into many enemies that were above my rating, but it did happen and I just stayed clear of that enemy group until later. One other slot is available and that is a DNA strand. This is a “boost” that adds a certain extra trait to the player. They can change one of five stats – brawn, brains, spunk, health, and move. Depending on which classes you choose, you can use these DNA strands to boost what you need most. They are given all thorough the game and there are some 15 of them to choose from.

Aside from the fighting, which is 100% more involved, there is a lot of run-and-fetch it involved in this game, and for me, is probably the biggest drawback. You eventually open the “fastpass” warp stations all over the town, but until then, you are just walking... not running, or sprinting, or even riding a bike. You WALK. It is slow, menial, and a complete waste of time. I cannot fathom why they decided to make this so depressingly slow, but there is a lot of traveling from all corners of the map, and after a while, you get fatigued from slowly trudging from place to place. 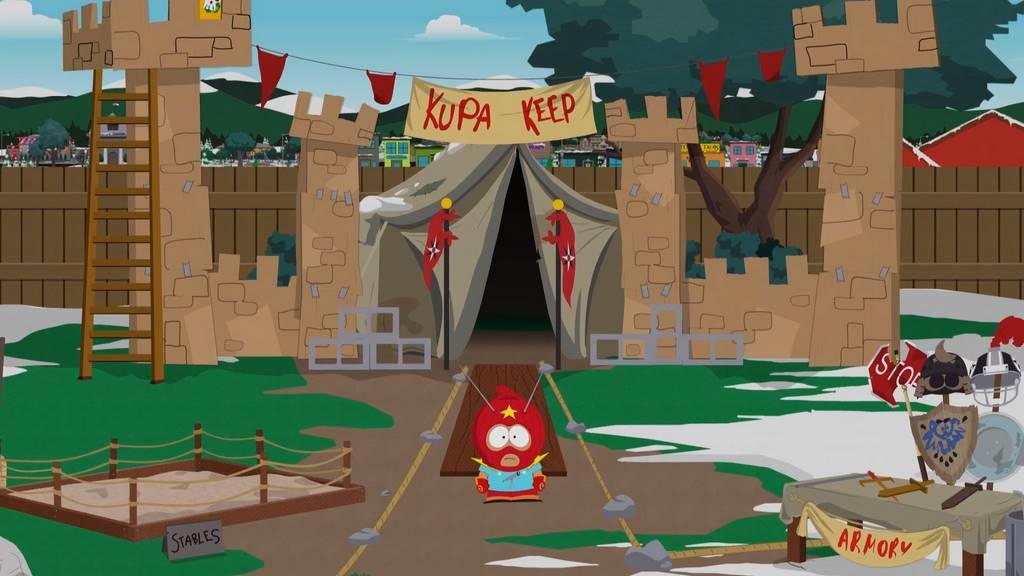 The one part of that game that I deemed "useless" was having to use Coonstagram. Cartman makes you use an Instagram-type of device to collect friends and pictures of townsfolk. Aside from some partially funny posts, the use and need of this was completely unnecessary and is thoroughly annoying at times. Cartman forces you to use it in the very beginning of the game and it just drags the first areas of exploring. It really isn’t funny, and it isn’t used but once in the game after the first 10 minutes or so. Definitely could be lost without hurting the game in the least.

Some other smaller issues include repetitive fights, too-similar attacks from one character class to another, and boss fights that are more frustrating than challenging. These, however, do not hardly ruin a game that is a heck of an RPG as you are going to find. The storyline is typical South Park fare and the characters are now some 20 years old, but I really wouldn’t miss this game unless you just despise the franchise.

The Fractured But Whole is a solidly good RPG game that incorporates the South Park attitude with a lot less “in-your-face” crudeness than The Stick of Truth. It has a better fighting setup, an easier-to- digest storyline, and is still laugh out loud funny at times. What else do you need from a South Park game?