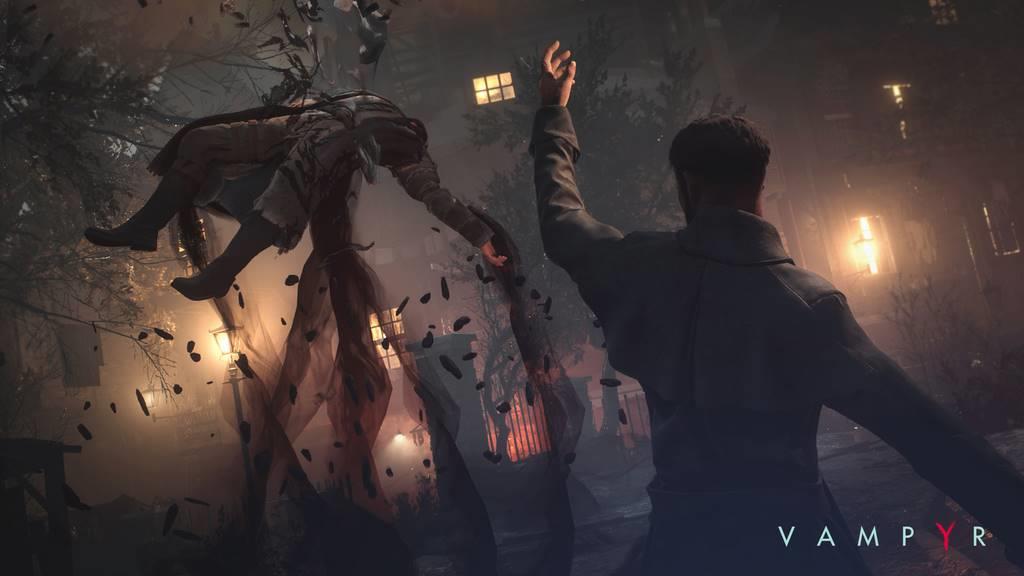 The ambition of Vampyr is evident from the, shall we say, lofty-sounding introduction sequence. A neo-gothic tale of vampires in London during the waning days of WWI, the title plays on the more restrictive elements of British high society, combined with the socially, psychologically, and physically destructive aspects of what it means to be a vampire.

A recent title from developer Dontnod Entertainment, the team behind the Life Is Strange series, Vampyr follows along the same lines of dialogue and action-driven gameplay that packs serious consequences, like, deathly consequences. If you think I’m being sarcastic (well, I kind of am), you should really pay attention to some of the dialogue in this game. Most of it is touching and heartfelt, and at times devastatingly human, but there are some points where it reminds me way too much of this one kid from a poetry workshop in senior year of undergrad that wrote a really bad emo poem and had an even worse excuse for what inspired them to do it. And I’ll get into why the dialogue reminds me of this and what I think it signifies in general, but I had to include that tangent because I think it speaks to what the game is trying to be, and what it actually ends up being (and you never know, the writers could have done that on purpose, and I’m just reading way too much into it, and the joke is on me).

Players control Jonathan Reid, a surgeon recently returned from WWI, and the dead. He’s a character, but he doesn’t have that much depth, and it’s the first aspect of the game that conflicted me. Jonathan Reid is not that much of a character, i.e. I really don’t know who he is. Part of that comes from this function that you make Jonathan who he is, but no matter what you do, he remains resoundingly hollow, and that’s not how he should come across. Reid is not Master Chief, he is a person who has had his life drastically changed by vampirism. I want to feel desperate, I want to feel depraved, but instead, I just feel a mix of sadness, guilt, and frustration. 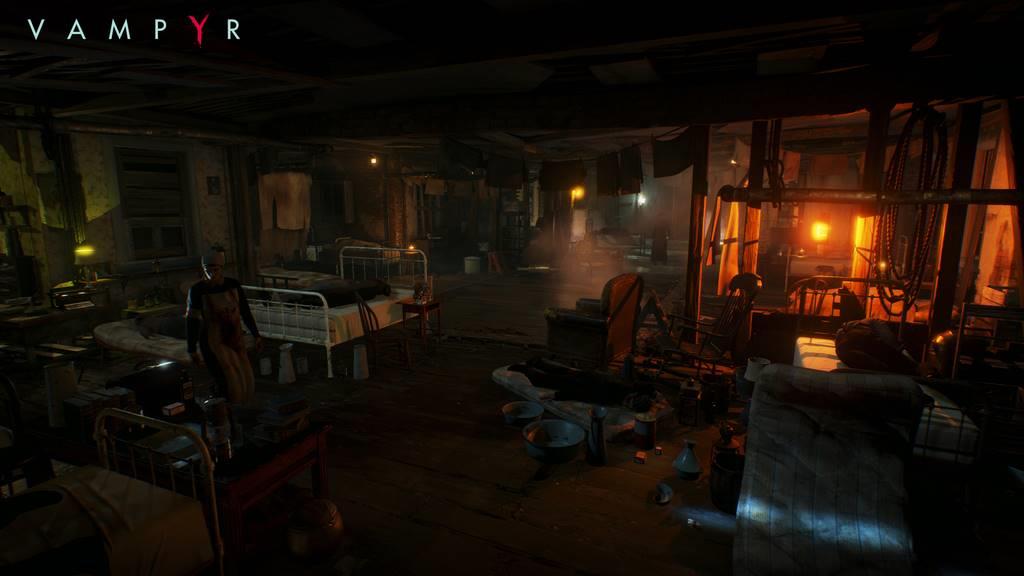 I say guilt and frustration because that is what I feel whenever I talk to the inhabitants of London. It is split into four districts (with subdivisions): Pembroke Hospital, which acts as the hub; Whitechapel, the poorest neighborhood, and a focus of much of the misery; the Docks, a neighborhood that is better off but still on the edge; and West End, generally a better place, based on the wealth. I make repeated mention of wealth because class divisions are such a prevalence in this game’s world. Correct me if I’m wrong, of course, but in Britain, there are literal, concrete layers of society. There are regular people, like you and me, which comprise the majority of the population, but then there are knights, dukes, princesses, and kings and queens. The thing that’s significant about this fact is that if someone has that honorific title, they are seen as being a level above everyone else. I mention this because in nearly every neighborhood Dr. Reid enters that is not at his socioeconomic standing, someone will casually mention how odd it is to see him there. Hard as it is to say, I think this is a really good showcase of how British society interacts with what it means to be a vampire. Dr. Reid, and the player, have immense power over these people, and the hardship that the voice actors and writers show these people going through can be heartbreaking. So it really disappoints me that there really isn’t much point in my taking their lives if it’s just for the sake of leveling up.

But before I get into the meat of this review, I will mention a few of the finer details that will surely get glossed over in the coming paragraphs. The multiple, actual gameplay systems mainly consist of combat, crafting, and dialogue. These all play into the macro systems of the game, but I’ll get into that later. The combat is nothing special, excepting the vampire abilities, of which there are a lot and are fun to use (you also need blood to use them). But otherwise you have melee, which uses stamina, and guns, which use bullets. The dialogue system serves to explore the side characters’ pretty consistently layered lives. You have to work hard to get at what makes them tic, and I mean hard. The crafting mostly plays into the health of Dr. Reid, and the citizens of the world. Each district has multiple tiers of health, and the sicker the inhabitants are, the worse off the neighborhood gets. It’s a mix of complex and simple systems that altogether elevate the game’s ambitions, while still using more traditional methods of execution. 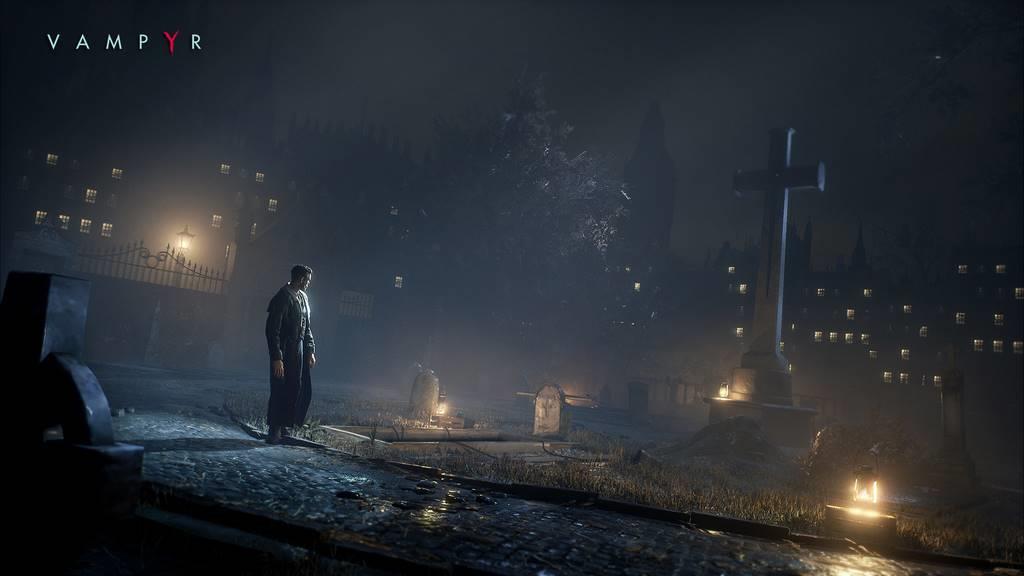 And, before I go further, I have to mention the music and tone. I describe the music with one word: awesome. It sets the tone so much better than the rest of the game, and is really just great. It gave me what I wanted from the rest of the game. Going on tone, I have to say that I am genuinely scared to walk the streets of London (at least in this game). The darkness, noise, and other in-game, marginalized aspects work in such a fashion that gives me a genuine fear to go out, not because I don't think I can beat enemies in combat, but because I'm afraid of what's around the corner.

This leads into my conflict with Vampyr, and what I see as Vampyr’s conflict with itself. I really admire this game for what it’s trying to be, but my issue lies with what it is. The game’s most important systems, i.e. the ones that have the most influence with how the world’s fate plays out, are the leveling and social systems. The social systems play into the stability of the neighborhoods, which are each headed by a Pillar of the Community. The leveling system interacts with the game’s combat and social systems curiously: citizens, or layered characters, give more experience when killed, than do enemy combatants. The game in no way answers why, so that is where my conjecture about British society comes back in. It makes sense that both the high-society types, like Reid, and the lower vampires (called Skals and Ekons) and other human combatants (called the Priwen Guard, they don’t like vampires i.e. you) would be more vapid and empty. They are the literal blood-suckers, harassing and making life hell for all the normal people (the vapidity and emptiness of the high society types is evident in the game (especially the dialogue in one scene), but I’ve seen met some astoundingly intelligent and wealthy (and vapid) people in my own life and admire how close the writers get it). 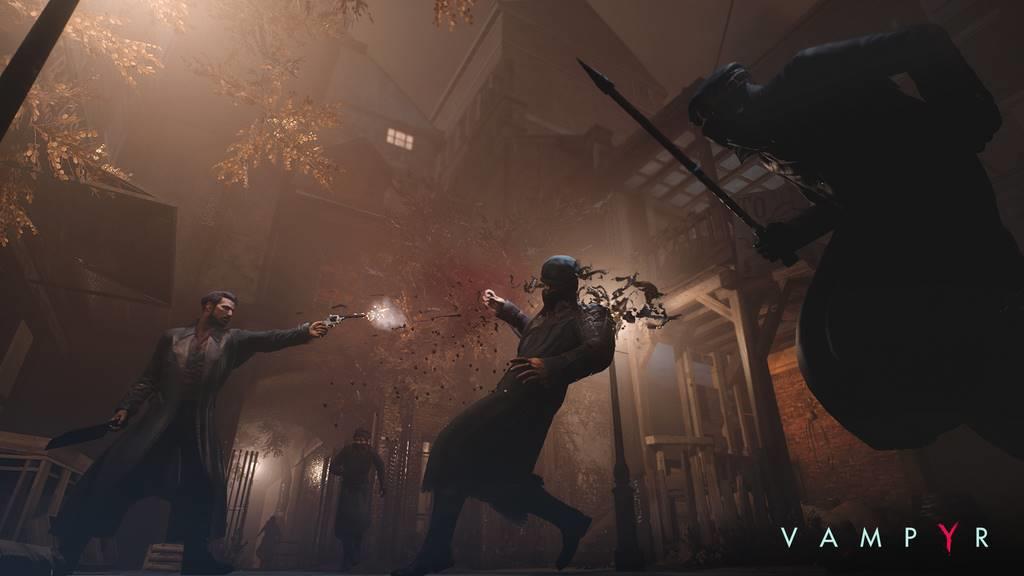 The issue I’m trying to get at here is that there are very few reasons for the player to take out the citizens, the exceptions being (and this of course depends on your disposition, I have a lot of sympathy for the “real people” because I have known so many of their struggles in my own life) the higher-society types or the criminals that make life worse for the normal citizens. I genuinely felt bad when I took some citizens’ lives just so I could take out a scripted story boss whose inclusion in the story didn’t have any change and wasn’t necessary (long story short, a dead person dies again. I know). Of course, a more patient player could have just tried to find the right strategy to beat said boss, but while that was a strategy I used for Unravel 2, it is not one I could employ here, because the game does not let me. To go back to my conflict one last time, it both does and does not make sense that civilians provide more XP than do combatants. You must work harder to get the civilians, and thus have to navigate a tricky social system, to get at them. If you do, it destabilizes the neighborhoods, but makes combat easier. It is the definition of a trade-off, and it is one that I admire, but also one that I feel strongly conflicted about. I don’t know if the game is trying to say something about the social stuff, or if that is just me reading way too much into the game (read: low-hanging fruit). I don’t know the answer to this question, but it is something that is admirable in its ambition, but clumsy in its execution. I love that I have to tiptoe to get the desired outcomes, because certain decisions that I’ve made have come back to bite me in the butt.

I've realized, in all this, that I have forgot to mention anything about the story. In short, you are trying to find out who turned Dr. Reid into a vampire. What's nice about it is that it's layered, and the decisions that you make in the different stages of the story intertwine with the gameplay, and that, I view, is a standard that many consequence-focused games should adhere to. 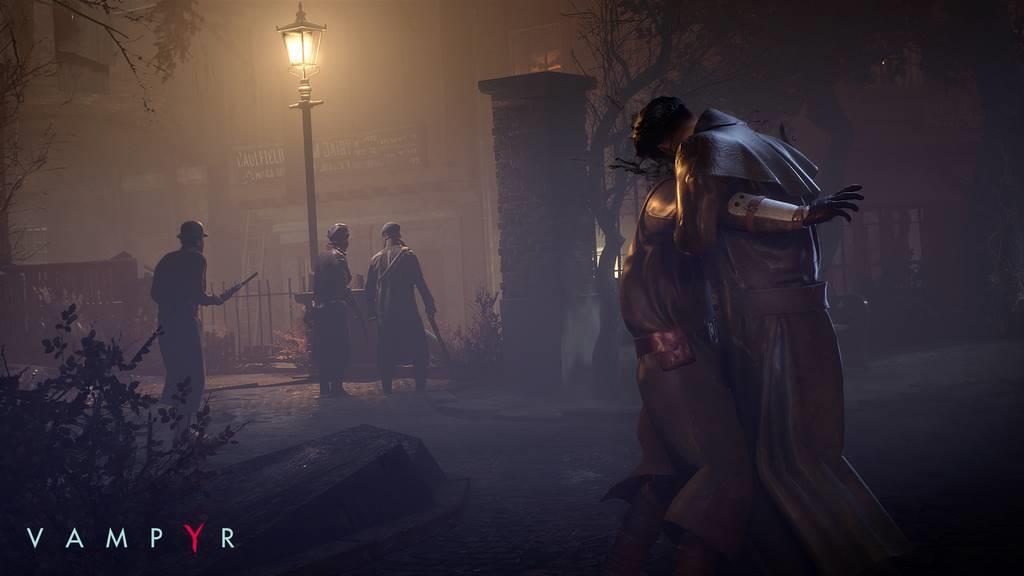 As a quick note, I mentioned a couple things about dialogue, and how that plays into the ambition of this game. This mostly has to do with the introductory sequence and the dialogue between Dr. Reid and various high-society characters. It’s ambitious, but ultimately hollow, when a writer pens that death is nothing but life without love (or something like that). A banal statement that is cliché in the ugliest way, without any thought put behind it (this is my literary snobbishness coming in).

I parallel that with the game as a whole. It tries to say something intriguing, but just ends up falling on its face. That doesn’t mean that it’s not good, because I’ve mentioned how it’s made an emotional impact on me. I will play this game again, because, beyond everything, it is ultimately an interesting and valuable ride.

I want to like this game, I really do. But it's holding me back from doing so. Reading into it, I find a lot of near-depth, but nothing that the game actually employs has much depth to it. There are a ton of amazing aspects that boost the game, but its larger ambitions lies just outside the reach of its execution. But it is worth a try, and an admirable achievement. In truth, I think this game is more a 7.8, but I feel the current rating it has adequately describes its qualities, while acknowledging its flaws.