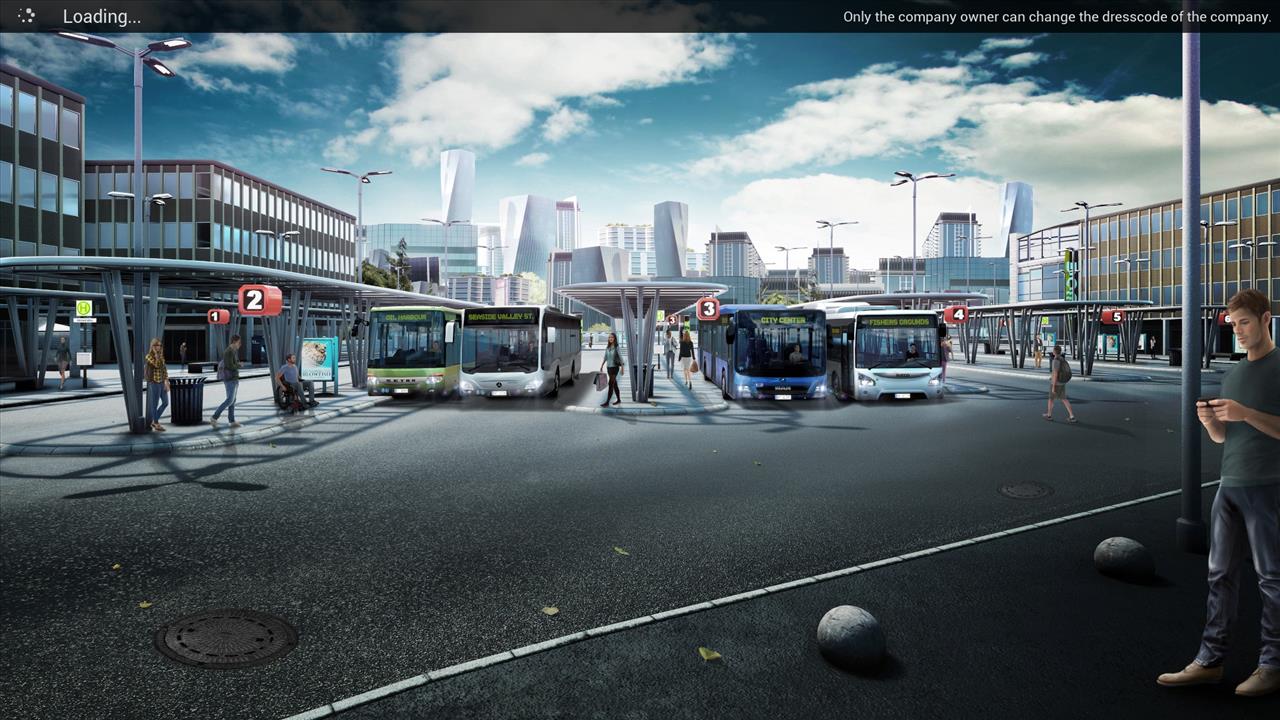 When I first saw Bus Simulator 18, it was in the form of their over-the-top multiplayer trailer, featuring four very excitable people having way too much fun driving buses around town. Given my own feelings about simulators as a genre, I was intrigued by this trailer. As someone who finds the idea of driving a bus in real life particularly un-fun, I was genuinely curious how a game could go about turning such a menial, job-like task into something interesting and replayable.

Bus Simulator 18 has a couple of different levels to its gameplay. At the lowest level, it’s about driving buses. No surprise there, it is there in the title of the game. You take the driver’s seat in a bus and drive it around town, picking up and dropping off passengers. You control pretty much everything on the bus, so you must dispense tickets, open and close the doors, and even extend the wheelchair ramp when required. The game throws a lot of curve balls at you while driving, such as fare dodgers, passengers listening to loud music, speeding cameras, and some absurdly placed potholes. At the end of the drive, you get paid out based on a pretty simple equation: all the good stuff you did minus all the bad stuff you did. Signaled before turning into the bus stop? Great! Hit the speed bump too fast? Not great. It’s a simple model, but it works effectively. Personally, I found myself focusing a lot more on being perfect because I didn’t want to compromise my earnings at the end of the route.

Overall, the actual driving of the bus was more good than bad. The bus moves responsively and more complicated maneuvers require thought and precision (like turning, roundabouts, etc.), and the challenges the game sets before you are easy enough to manage without getting overwhelmed. Every time you bump into something you shouldn’t, the game penalizes you, especially if it’s people (imagine that). Amidst all this, there was some bad. Occasionally, taking a turn too tight and bumping certain objects could phase the bus inside them, making it impossible to move or get out. It took me a while to figure out that there was a button in the menu to reset my bus to the road, which may serve as an indication of a bug the developers couldn’t quite work out. I don’t generally expect simulator games to use hyper-realistic traffic models, but the drivers in the fictional town of Seaside Valley appeared to have no idea how traffic is supposed to work, as they pretty much just do whatever they want. The good in this is that the game seems to prioritize your bus over all other traffic, so you generally don’t have to worry about sitting at a four-way stop for 10 minutes. Even so, that didn’t stop cars from almost plowing into me in the middle of intersections, which ends up being really frustrating. 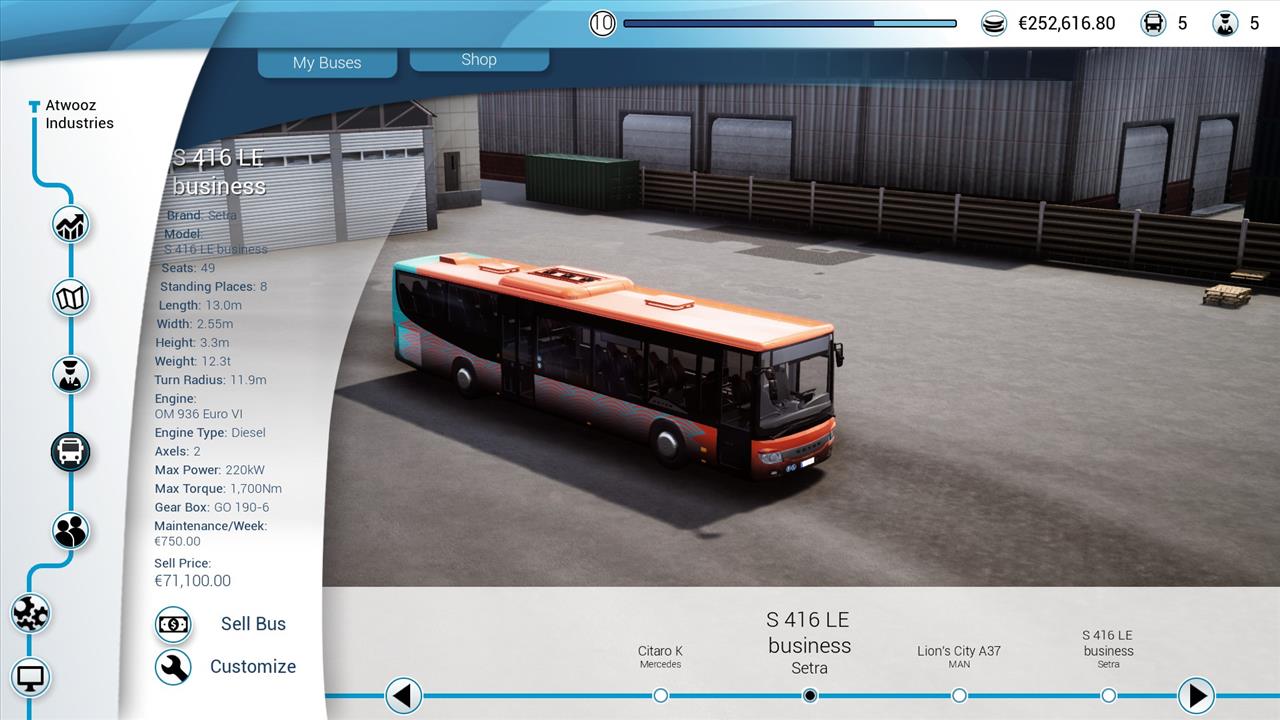 At the higher level of gameplay, the player acts as a manager for the entire bus company as it expands throughout Seaside Valley. This part is what got me excited, as I’m a big fan of economic systems in games and trying to make them as efficient as possible. So, at a high level, here’s how the management systems worked in Bus Simulator 18. As the manager, you create bus routes going through several stops, and then you drive the routes. After you’ve driven a route, the money you made on that route is extrapolated out for a week period, and you have earnings. You use this money to expand your bus empire in a variety of different ways.

First off, you can hire drivers. Each driver gets their own little info blurb, and costs the player a certain amount of money a week to maintain. The second thing you do with money is buy buses. As you level up, you get access to variety of different buses. Other than just looking different, buses can have different engine types, which will impact their maintenance costs each week. Each bus can be painted and customized to look as awesome as you want (which I probably sunk more time into than I should have). Once you have an extra bus and a driver, you can assign them to one of your created routes. Every time you drive a route, all your drivers will also generate income, allowing you to build your bus company up even quicker. The game holds your hand through the almost all of the company management, giving you challenges to fulfill certain criteria to keep unlocking different areas of the city. Certain challenges may require certain types of buses which you need more money to buy, like a CNG bus, so players need to grind routes for a bit to level up and get more money. 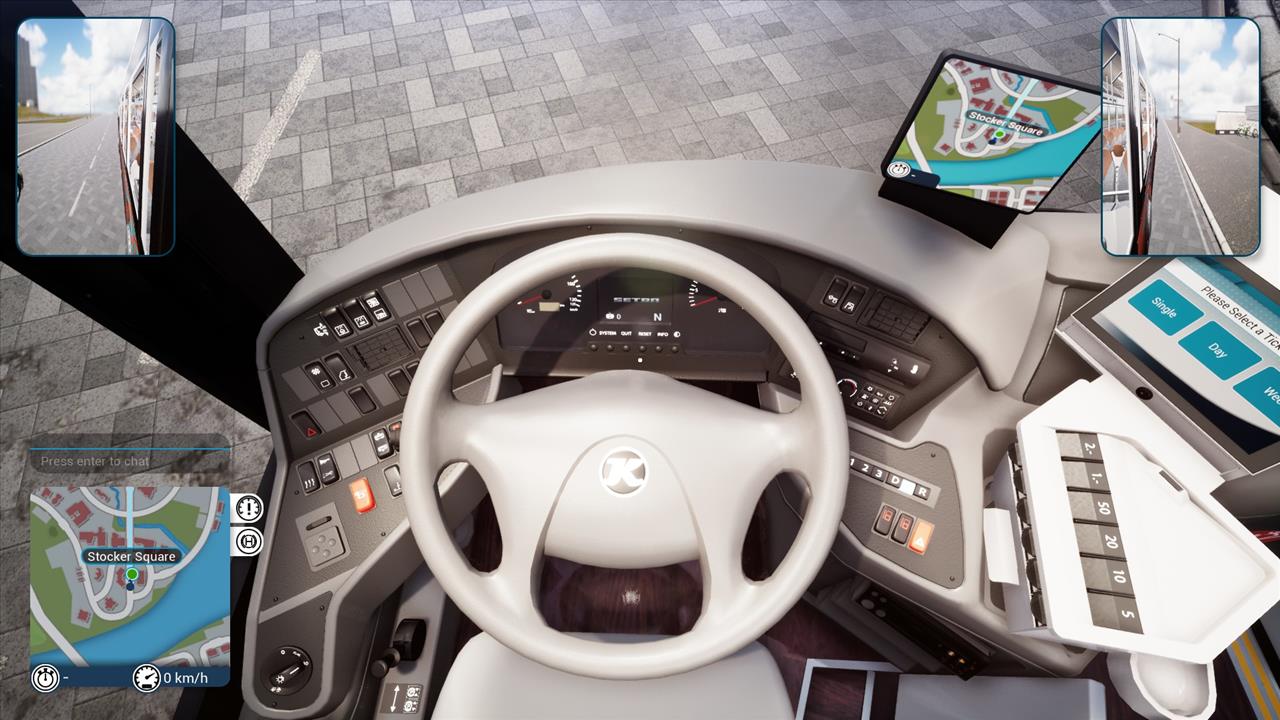 All in all, I found myself enjoying the economic side of the game. Apart from painting my buses, it was fun choosing drivers to hire and then matching them up with buses to start generating a lot of money. As I unlocked more parts of the city, I would be able to build new routes to fulfill new challenges. The gameplay loop here was downright enjoyable, and for me it trumped the menial job of just driving the buses around. In times where I was waiting on money, I would just create a short route and run it repeatedly to generate a lot of money through my employees who were driving the longer, more profitable routes. Benefits of being management, I guess. There’s a part of me that wishes there was more depth to this portion of the game, but in some sense, I think it’s a little too much to expect from this type of game.

The final piece of Bus Simulator 18 is multiplayer, which allows the player to bring in up to three friends to help run the bus company. I jumped into a multiplayer game with fellow Gaming Nexus writer, John Yan, to get an idea of how the multiplayer plays out. There are three multiplayer modes you can choose from when driving a route. The first is called Convoy, where each player rides in their own bus and travel together from stop to stop. The second is Tag Along, where both players occupy the same bus on its route. The last one is Fast Route, where one player has a selection of stops, and all the other players must visit all the stops.

Multiplayer was underwhelming. Convoy was interesting, but it’s just two people playing the game separately, but next to each other. Tag Along was fun, but it had problems in that the second player has really nothing to do except ask passengers over and over again if they have their tickets. Fast Route, the weirdest of the three, seems like it’s intended to have the buses bumping into each other a lot because their routes are moving at different rates, but it never really seemed to work out that way. When we did this mode, I just finished my route quickly while John had to keep visiting stops for much longer. Despite all that, Bus Simulator 18 fits the model of a game where you can ‘make your own fun’, and that was true of our time playing the Tag Along mode. There were plenty of laughter filled moments, but it’s hard to credit those exclusively to the game.

Bus Simulator 18, at its core, is a good simulator game with a whole lot of soul. It brings a lot of playability options to the table, whether you want to just drive a bus or manage the whole company. The driving is complex enough to keep the player involved, and the economic systems provide a respite for players tired of being behind the wheel. However, the game is hurt by some frustrating bugs and sub-par traffic systems. Additionally, the progression of the company is a little too linear, and leaves little room for the player to put their personality into the company’s growth. Multiplayer, while a great feature, doesn’t seem to give enough content to extend replayability past the first couple drives with your friends.