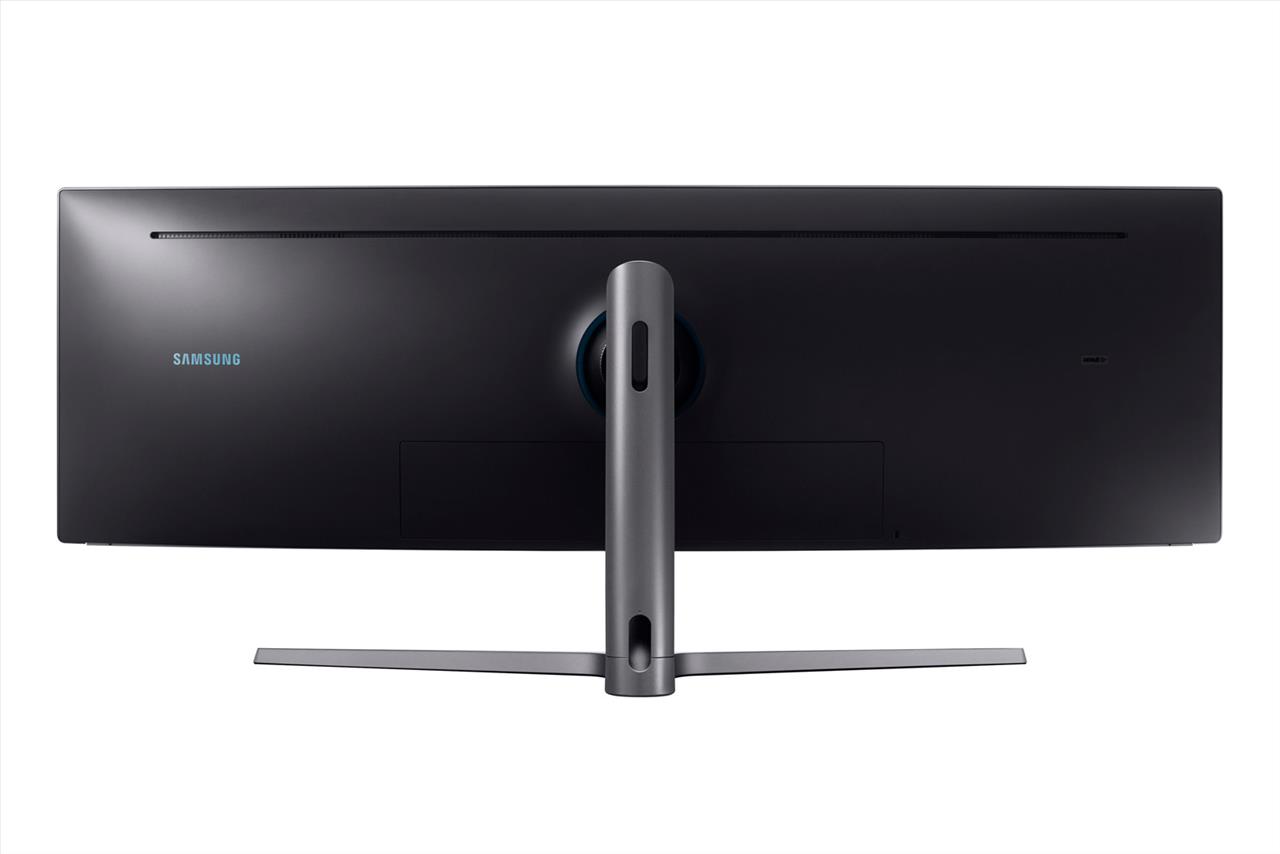 Repeat after me: Bigger is better. Bigger is better. Everyone got that? Good, because that’s going to be the theme of what you’re about to read. I remember years and years ago when playing on an oversized RGB monitor meant getting a 17” display that was flat and actually allowed S-Video if you were lucky. It was the holy grail in the mid-90s! Even console gamers remember the wonders of S-Video and how great it was. Nowadays, there are so many options as we evolved from S-Video to Component to DVI/HDMI to DisplayPort, PC gaming has never enjoyed so many options. 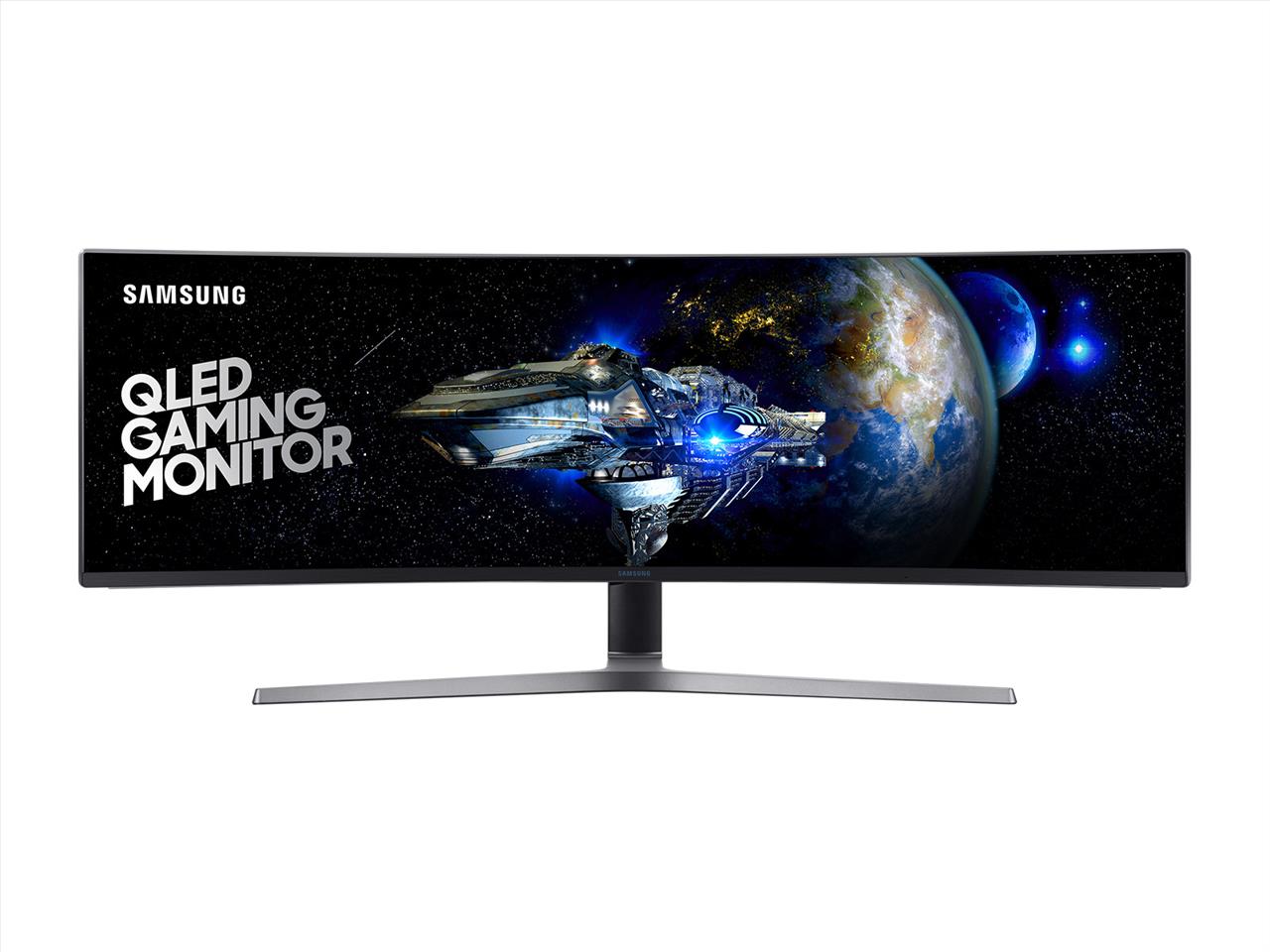 While connections have stabilized and we know that most everyone will be using DVI or DisplayPort, what hasn’t settled down is the battle for the best monitor. There are so many terms that can confuse new PC gamers. HDR, IPS, UHD, Full HD, 21:9, 32:9...and it goes on from there. Samsung, who have found themselves a mainstay in the monitor wars, decided to throw caution into the wind and basically asked themselves this question: What if we just cut a TV in half and made a monitor out of that? That’s what the Samsung 49” CHG90 feels like: A massive HDTV that was cut in half length-wise and framed up. This is not a bad thing, rest assured, as I’m here to tell you that ultra-wide is definitely the way to go.

As always with my accessory reviews, let’s start with the basics and get the specs out of the way.

Look, there are a lot more specs besides these, but these are the ones you care about. Forty-nine inches corner to corner in width. 3840x1080 resolution. A mouth-watering 32:9 aspect ratio! Even with the strong curvature of 1800R, the viewing angle still is 178 degrees. Samsung outdid themselves top to bottom, even though the hardest of hardcore gamers are going to ask why there isn’t a 4K resolution on this monster, but we’ll get to that later on in the review.

Here is what’s under the hood in my PC so you understand what I had in order to run this monitor without any issues:

This is your standard VR setup as I can run my Vive with no issues off of this tower. I had to upgrade the motherboard recently as I was running a compact setup with a Corsair 380T Mini ITX case.

Diving in with Far Cry 5
I’m not sure there’s a better way to test out a game than going through the nerve-wracking play of a Far Cry game. Let me tell you that having that ultra-wide aspect ratio helps in seeing that mountain lion come at you a second or two earlier than you’re used to. I wasn’t more than an hour into the game and was sneaking through the forest when I heard that familiar roar. Sure enough on the far right side of the monitor, I saw it and had enough time to blast it. If I had a regular monitor, chances are high I was lunch meat for a hungry lion. 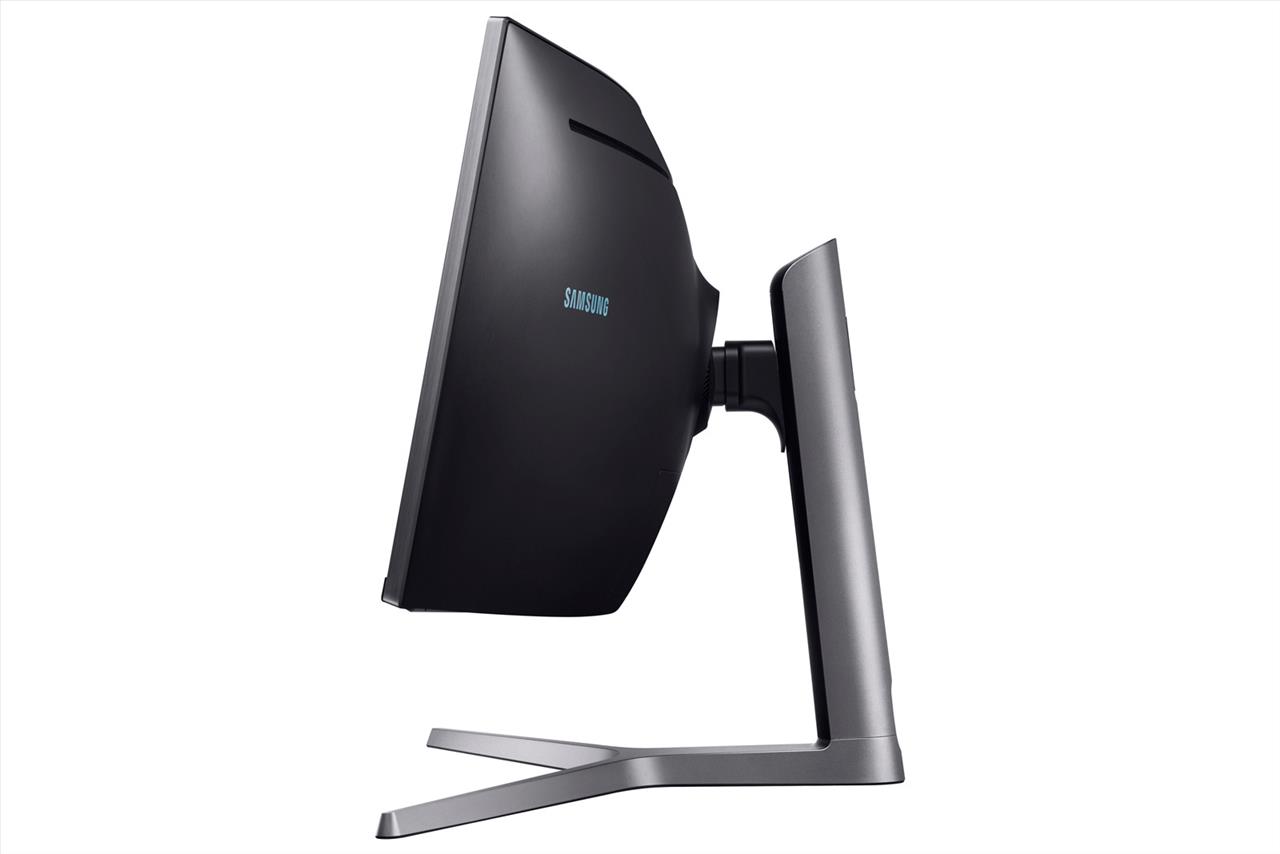 The CHG90 truly stood out in this game. That extra wide field allowed me to track more enemies than I could count when coming up on compounds, which is an invaluable advantage to have in these style of games. I never felt like the monitor lost anything when it came to framerate either, even when I’d have to bust ass into the forest if I was spotted by the enemy. My surroundings remained fluid and natural, never feeling like it suffered and especially when I’d have to whip around quick to see if anything was still chasing me. I cannot stress enough how great the width is when flying and getting into dogfights, though. It is not easy tracking enemy aircraft, especially since you’re in WWII style fighters that don’t have a functional radar for you to use. Having such a wide field of vision makes gameplay that much easier.

It might almost be TOO big for Rocket League, though…
I switched things up and fired up my addiction that is Rocket League, jumping straight into online mode to see how amazing it was to have almost a full 180 degree view. Honestly? This was the only time I didn’t like the monitor because it felt almost too big or too wide for this style of game. It wasn’t anything major, but having that extra field of vision when driving around and looking for the ball, teammates or enemies almost threw me off because I’d literally be turning my head to the right or left to do so.

Besides that little annoyance, the monitor performed magnificently as I expected. Rocket League might look amazing in 4K and using G-Sync, but I happily take the trade off to have that wide range and still have the game look beautiful while I’m trying to put an aerial ball into the net.

Shooting across the stars in Elite: Dangerous never looked so good.
Spoiler alert: Jumping to hyperspace in any game on any monitor is pretty damn cool.

Activating that Frame Shift Drive for the first time with this monitor made me have to step away for a moment to just appreciate what I saw. Besides the insane field of vision in the cockpit and feeling like I didn’t need my VR headset for the first time, my god was it beautiful to watch stars go by. I’m a huge advocate for VR gaming, especially for a game like Elite: Dangerous where the hardware is truly pushed, but I can sit here and tell you that a 32:9 aspect ratio is something special, and you don’t have the annoyance of having to lift up a visor in case you need to step away for a minute.

Entering and exiting space stations became a bit easier too, simply because there’s more to see with the wide angle view. Being able to see the interior of the large stations in such quality truly allowed the CHG90 to stand out.

Of course I was going to play FIFA 18, too.
I wrapped up my testing with FIFA 18 on the PC. I’ll be honest: The only reason I wanted to do this was to see how much of the field I could put onto the screen at once. Needless to say, that view is nothing short of spectacular, but it’s better to show you so here’s a video from YouTube channel Alkong using the CHG90. At the :58 mark, you get to see just how much view there is. It changes everything:

Imagine having that much view all the time? You can completely change how your offense runs because you can see them making the runs instead of having to guess by the radar at the bottom of the screen, which is suddenly no longer needed for that very reason. Again, it’s a game changer to have this much view for a game.

Wrap it up, Sean. Should I buy this thing or no?
You’ll notice that most of this article is me praising this monitor and giving you very few reasons not to pick it up. The reason is because this monitor is just a wonderful piece of technology, even without 4K resolution. The hardcore graphics people are going to look at that and scoff, given that the price tag is currently $999 on Samsung’s official site, but again: I’m okay with this trade off. The view is magnificent, works with almost every game in the last few years (Sorry, Skyrim fanatics: You’ll need third party software to get it to work) and never really seemed to falter in any way.

The price tag is a bit steep, yes. Also, you might need to pick up a bigger desk because this thing is going to swallow up smaller, lesser desks and ask for more. I have an Arozzi Gaming Desk and the only thing I didn’t like was that I couldn’t use my riser to get it up to eye level. Thankfully, the tilt up and down on the monitor was more than enough to compensate as I could “look down” on the monitor and not feel like I was straining my neck in any way. 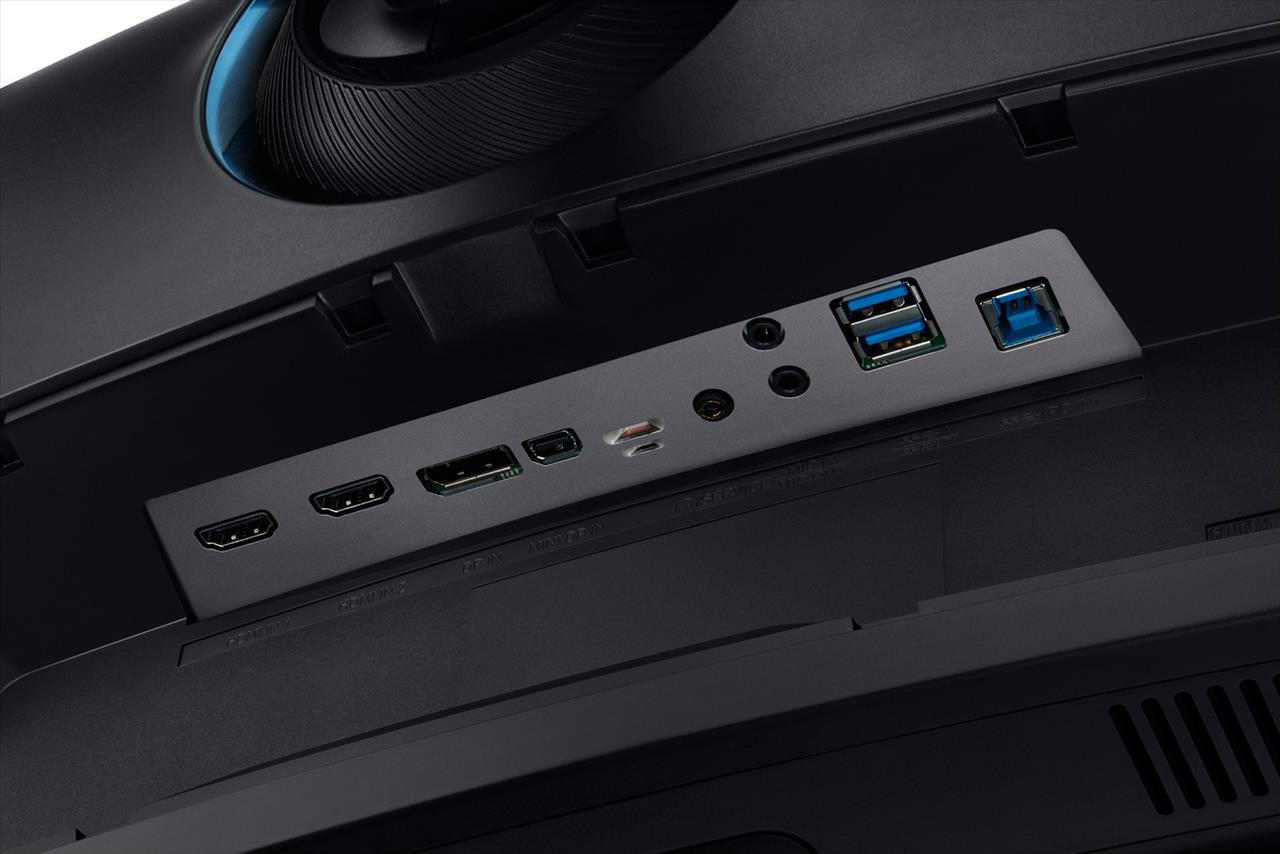 The CHG90 does not allow for G-Sync. Instead, it caters to the AMD crowd and works with the new FreeSync 2 technology. This will only help you out in dealing with any latency and truly take advantage of HDR content. Even though I’m rocking an Intel-based system, I still never felt like I was missing out on anything.

All in all, even with it being a 1080p monitor, it’s worth the price. I’ve never enjoyed gaming more than I have on a PC since I bought my HTC Vive, which I’ve used a bit less for regular gaming thanks to this monitor. Save up and go all out, if only to see the reactions of everyone you show it to and make them insanely jealous of your magnificent, god-like setup.

All in all, even with it being a 1080p monitor, it’s worth the price. I’ve never enjoyed gaming more than I have on a PC since I bought my HTC Vive, which I’ve used a bit less for regular gaming thanks to this monitor. Save up and go all out, if only to see the reactions of everyone you show it to and make them insanely jealous of your magnificent, god-like setup.