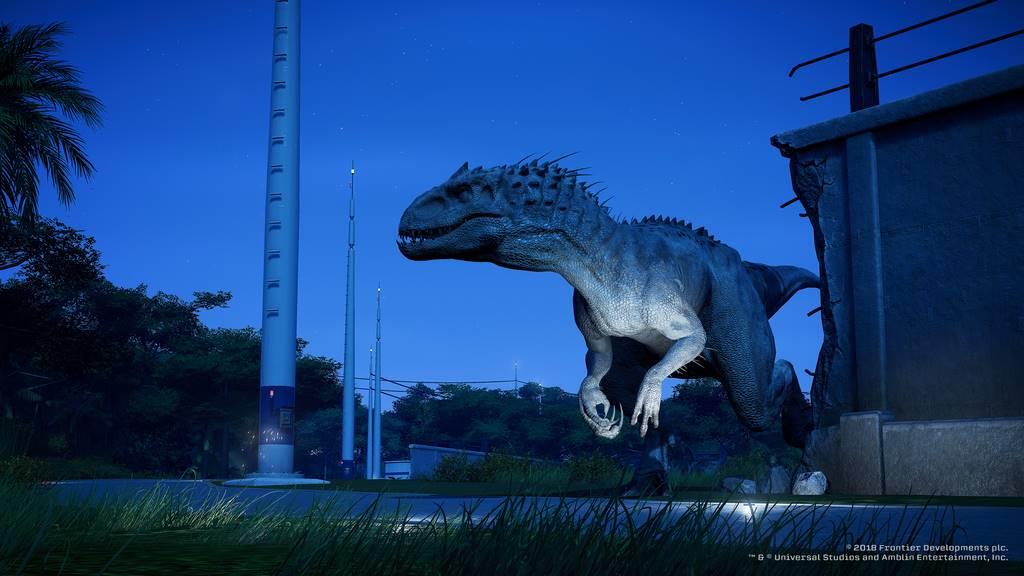 Written by Kevin O'Connell on 6/26/2018 for XBO
More On: Jurassic World Evolution

I remember the first time I watched Jurassic Park. It was a fantastic story with great actors such as Jeff Goldblum, Samuel L. Jackson, and Sam Neill. It had a soundtrack that gave me goosebumps. And above all it had that vibrating-glass-of-water thrill that made the movie a sensation. Jurassic World: Evolution as a video game, I thought, would be just as awe-inspiring and action packed as the movies. I was wrong.

The gameplay is as follows:

I can’t say that the game is much more than the above and when it does stray from this outline, it is either a minor contribution or not very good.

To start with, you have to build various buildings and enclosures over a set of five different islands. These are few in variety and are simplistic to build (saying you watch your budget). There are roads, power stations, and fences to build with these as well, but as more of secondary “waste-time” tasks than anything. The way that you build your park is up to you, but the building, enclosure, and scenery types are very limited, so it isn’t what you would call "personalized". The islands themselves are very underwhelming in design – with way too much of the same everything from one island to the next. You might expect some bigger variety, but it is all the same grass, tree, hill, ho-hum.

The dinosaurs is where this game should shine and unfortunately, it falls short. There are over 40 dinosaurs to create (none that can fly) and most can be a horrible span of time and effort to do so. There are varying steps of research, dig sites, and viable percentages that contribute to lengthy wait times and re-dos. These long-waited flubs also can cost hundreds of thousands of dollars. There isn’t anything overly exciting about the procedure and at the end of the creation, you get a mediocre cutscene of the dinosaur wandering about. I say mediocre because I don’t think the overall graphics of the dinos are very substantial. The grass, backgrounds, and textures are also rather meh quality. I can honestly say that the game looks more like 2008 than 2018. 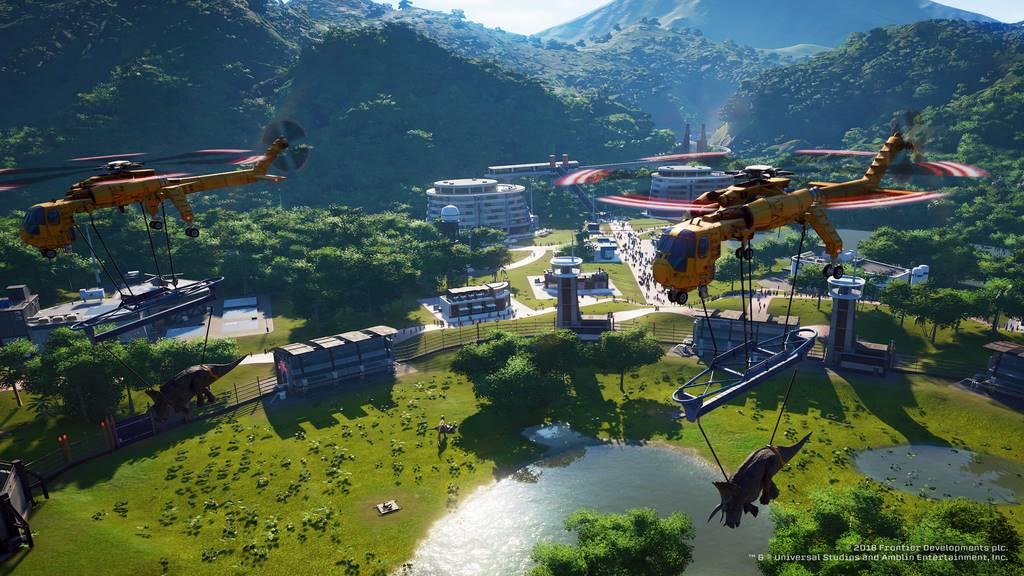 The overall directions for the game are rather low-quality as well. You have voice-overs from Goldblum, and B.D. Wong to help with what the next task is, but there is very little direction as to how this gets accomplished. Most of the time there is a trial-and-error feel to doing tasks and there are a few too many problems that can arise from this. An example would be building in an area where you cannot make a road after completion. You can demolish such mistakes, but at a huge cost. There are times where the game gives tasks that you have no idea how to achieve them. I had a few of these that became back-burner items until I could look them up later. 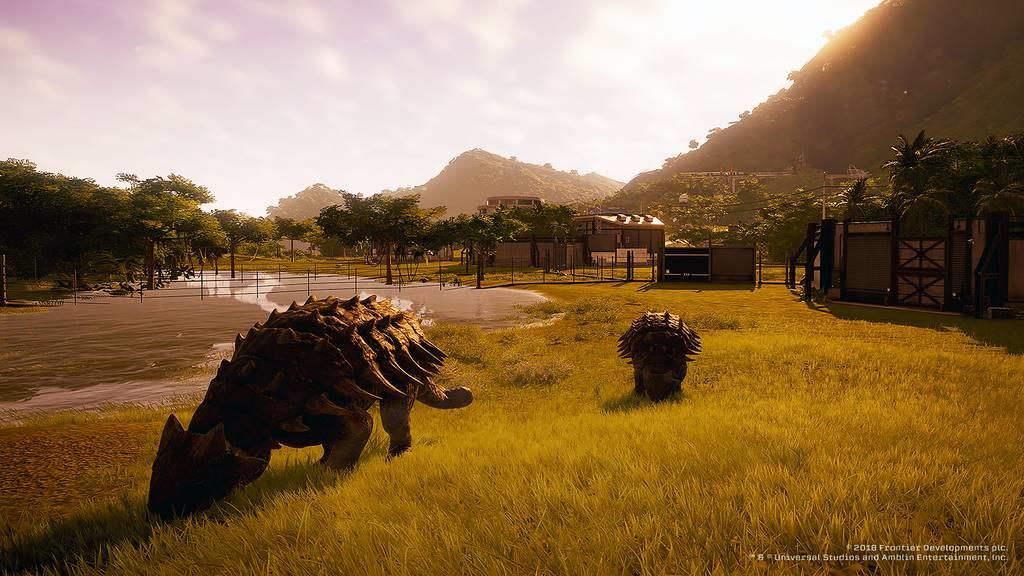 Then there is the tranquilizing dinosaurs for illnesses or rampaging. Do NOT get visions of a Call of Duty sniper mission. It is more like a horrible app where you press your finger on the screen and that’s it. There is no shooting from the back of a jeep at 60mph while getting chased by a way-over-pissed T-Rex. It is a simplistic problem with not a lot of terror and it makes the game more dull than it was already.

The music borrows from the movies and is still as magical as the day you first heard it. From the overture in the opening cutscene to the background ambiance music, the game’s most entertaining feature is the music. Sounds are quite good as well. Taking sound snippets from the movies and such, hearing a triceratops bellow for the first time is quite nice. Not overly good looking, but the sound helps with the realism more than the look does. 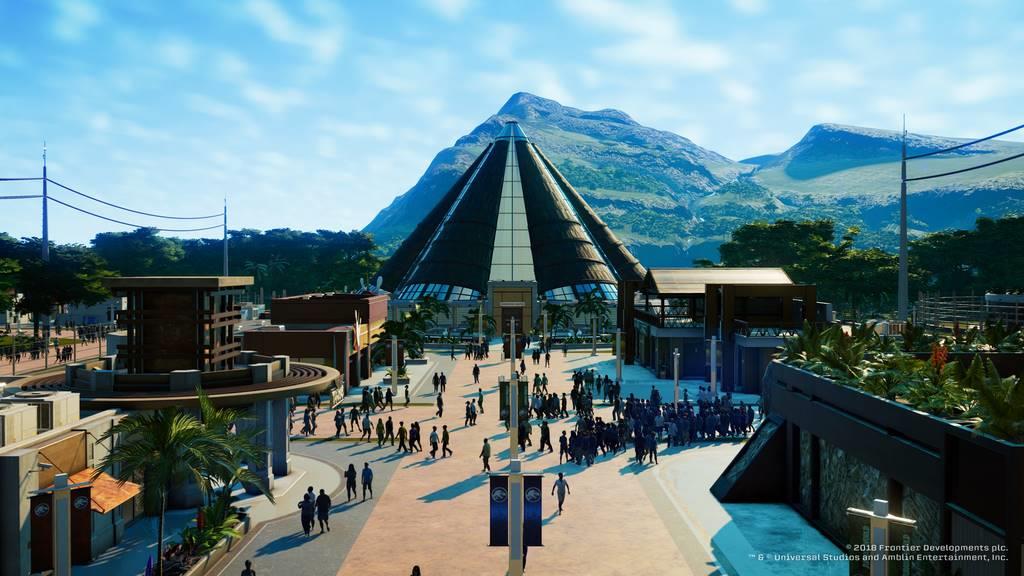 Then there is the actual park running itself. I have never seen such a debacle of a money-making sim game in my gaming life. I have played over a half dozen city building sim games (which were free apps, mind you) that had a better profit making scheme. How various shops and small venues have no effect on overall rating of the park is beyond me. What’s more, after the park starts to really shine, the smaller venues become worthless. Honestly, it isn’t like the customers care in the first place. There is no interaction with the customers in any way. I’ve seen basketball games with more emotion than the park goers in this game and they are supposed to be looking at a 70 million year old, 30 foot long, dinosaur.

And therein lies the biggest problem with Jurassic World: Evolution... emotion. There is no rush to the game. No real time restraints (besides waiting for everything). No "winning" the game, and for that matter, no losing the game. Kinda like Drew Cary in the TV show Whose Line is it Anyway? - "Everything is made up and the points don't matter."

Jurassic World: Evolution is an island-making sim where frustration and wait-times are scarier than any of the dinosaurs. The idea of creating 40 dinosaurs and their enclosures sounds like a real treat, but in this case, I’m sure Dr. Grant would have stayed at his dig site.