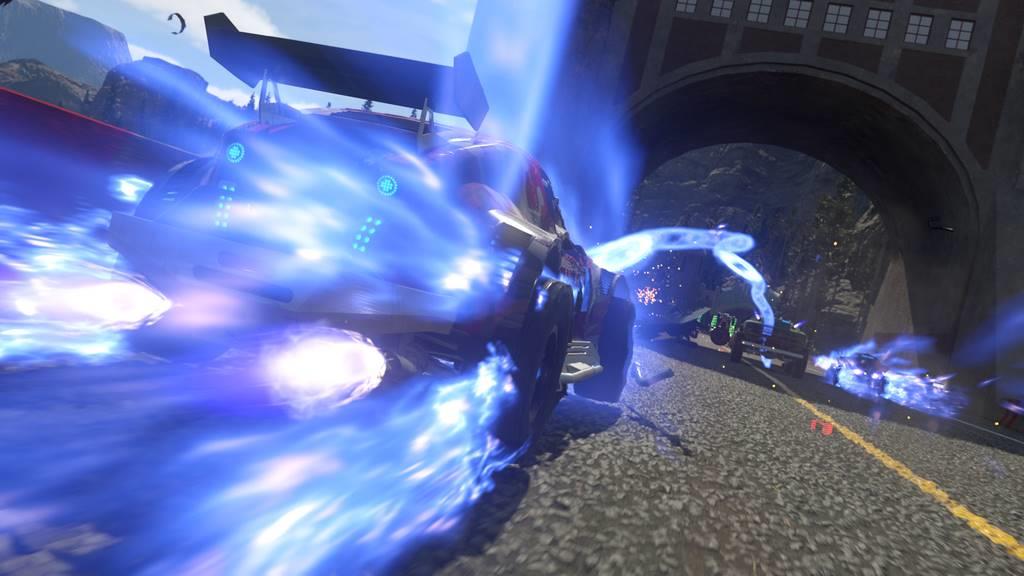 I have a slight disdain for games that do not have a full fledged single-player campaign. Swore up and down that multiplayer games are more fad than fantastic. Lately, however, I have been taken aback by a few games that have very little or no single player gaming. Games like Hawken, Killing Floor 2, and now Onrush. Onrush is a game with a single player campaign, but I have to say from hours of play… it is no match for multiplayer by a long shot.

Onrush is a driving, 7v7 competitive game that uses vehicle skills and driver tricks to win the matches rather than something as simple as crossing the finish line first. During the race, you will have to watch for larger vehicles, watch for vehicles “rushing” (more later), watch for environment hazards, and focus on the task at hand. If the game wants your team to drive through more gates than the opposing side, then you need to fight and push to that end. Takedowns and knockouts will happen on their own as you race for these tasks and because the game is very fluid, there won't be any spawn camping.

There are 8 different vehicles with dozens of differing shells to use. They range from motorcycles to large trucks. The motorcycles are faster and more maneuverable, while they are the most vulnerable and least effective for take-downs. The larger the vehicle, the better for holding ground and knockouts, but are almost useless for speed. The shells come in color rarity from green-to-blue-to-purple and can either be won in level-up crates or by purchasing them with the money collected. They can also change the shape of the body of the vehicle - though not the overall size. That means that each vehicle has 7 or so different body shells, so the customization is fairly deep. 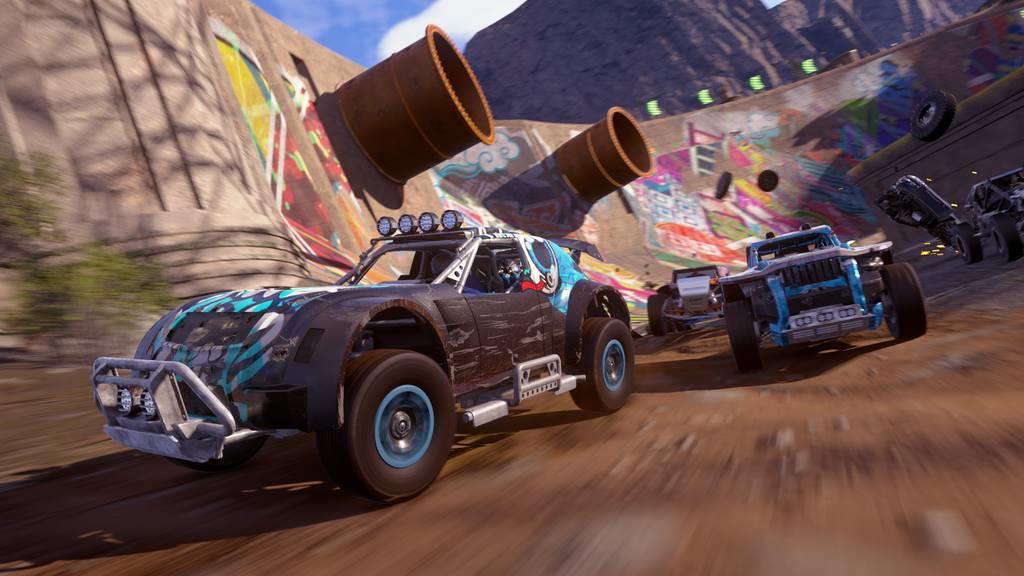 Like the vehicles, there are 12 different drivers to choose from. You can't customize the driver but the game gives just enough variety and then tacks on outfits, celebration dances, and bike tricks to make your character unique. There is no way to better your player in any way and they do not have any specializations for certain vehicles, so that is a miss too, but the game is more about your skill than the character’s.

Lastly, there are customizable tombstones. Onrush allows you to die and stay in the game, so tombstones that show where players have died make sense. These are all low-bit icons of varying types that will show up on the track where you last died. They are mostly for show, but some of the vehicle skills give powers to them – such as reduced visibility – after hitting them on the track. I think these are cute to see – especially when you see the spot you ran someone into a train a lap later, but the downside is that over 70% of the time, these markers are in places that would make the player die if you hit them.

Like most competitive multiplayer games, Onrush allows for MVPs of a given match and then awards four other players a place to celebrate for winning high score in a certain category – i.e. “longest time as a bike”, or “most takedowns”. The MVP will be an accumulation of all types of scoring that particular round, but not necessarily first in all of the categories. You may have won takedowns, but came in 3rd and 4th in two other categories – which still gave you a higher average than anyone else. The system works very well and adds to the excitement without being annoying. The MVP also gets a bigger boost in winnings, so it is coveted for more than just the “I’m the best” aspect. 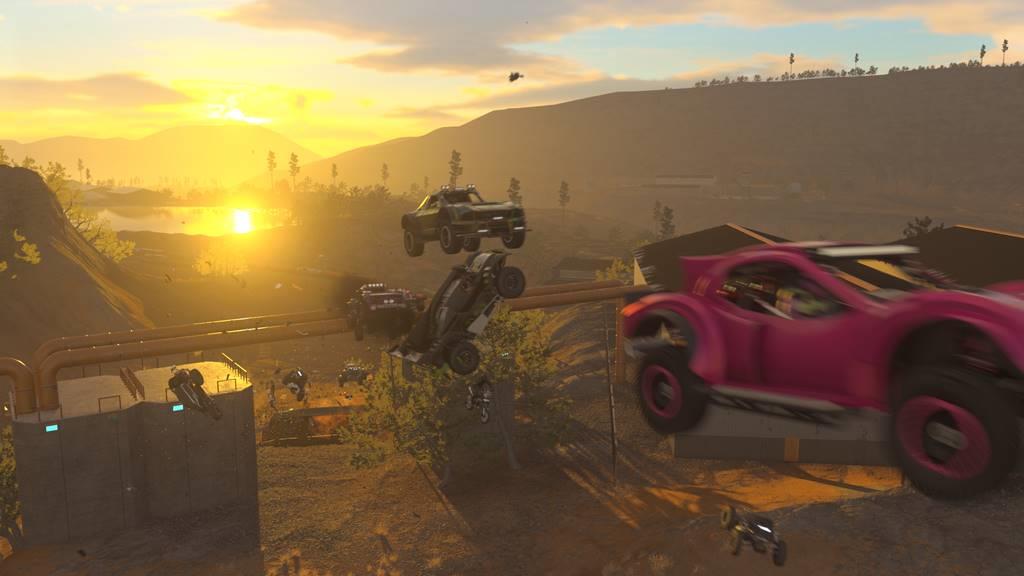 Now for the “rush”. Being able to “rush” comes from building up boost over time during a round and can be created from many different ways depending on which vehicle used. Once the boost gauge has hit 100%, the player is able to hit the “rush” button which sends whichever vehicle they are using into a frenzy of speed, strength, and defense that is hallmark to winning matches. For some of the “tank” vehicles, they are turned into rockets of mass destruction. For one of the bikes, you leave a trail of fire that decimates anything in its wake. As a tank, you build boost by high jumps and knocking out fodder and enemies. As bikes, tricks and backflips give rush to the pot. It is a simplistic system that is unforgiving if you do not follow the rules. Think tricks are stupid? No rush for you. Rather capture a zone than knock someone out? You’ll never catch it.

The single player campaign has you go after the same types of tasks as the multiplayer (capture a zone, race through gates, etc).  However, the computer vehicles are less exciting and 100% easier than going up against human counterparts. It isn’t that other games aren’t tougher against other players, it is that there is such a huge difference between the two for this game. After 3 hours of multiplayer, the single player campaign seemed like using water-wings in the pool after swimming the English Channel. 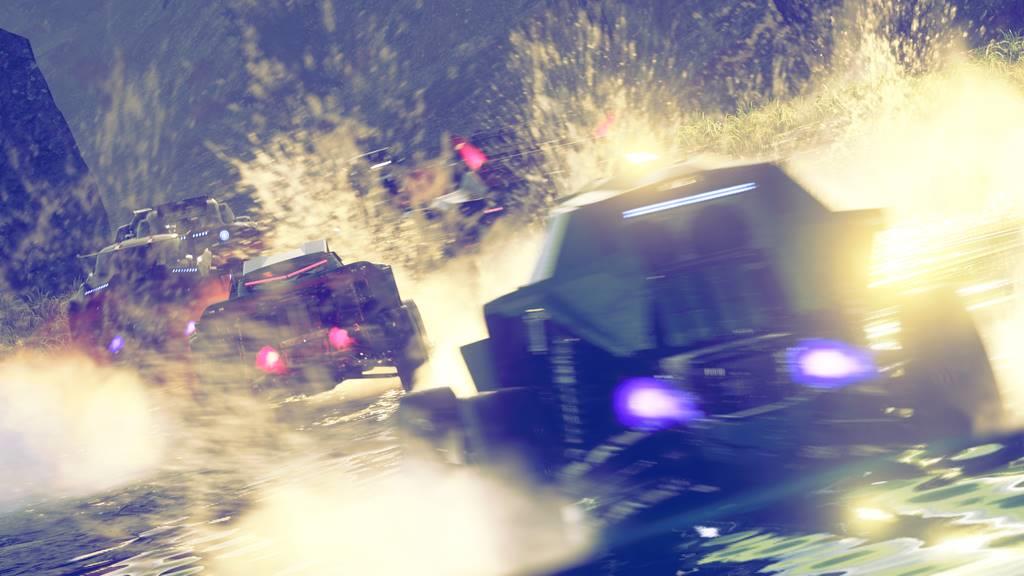 Other things I found wanting in the game weren't big problems but are worth mentioning. The bikes are a bit on the weak side. I realize that they are “bikes”, but the rounds where they are mixed with other vehicles were kinda lousy – both with knockouts and doing tricks. The tricks are cute (especially when you purchase new ones) but they can get tiresome quickly. Another drawback is that there are only 5 or so different types of challenges that you can do in multiplayer. They are still fun since there are multiple vehicles to use and almost a dozen different “tracks”, but after the 10th “run through the gates”, it’d be nice for something different.

It is nice to see a multiplayer game that is both entertaining, exciting, and doesn’t involve massive amounts of guns. Forza/Gran Turismo buffs will be a bit uneasy that there is no finish line or race for glory, but all of that goes away quickly. And even though the campaign is both too easy and a bit repetitive, you won’t mind as soon as a bunch of friends sign on. Then comes the real rush.

Onrush is one of the better multiplayer games on the market and is easily a game for all ages. The customization, competition, and teamwork all make for a heck of an afternoon of gaming. And where it is 7v7, you can’t possibly run out of spots for friends to come get some.