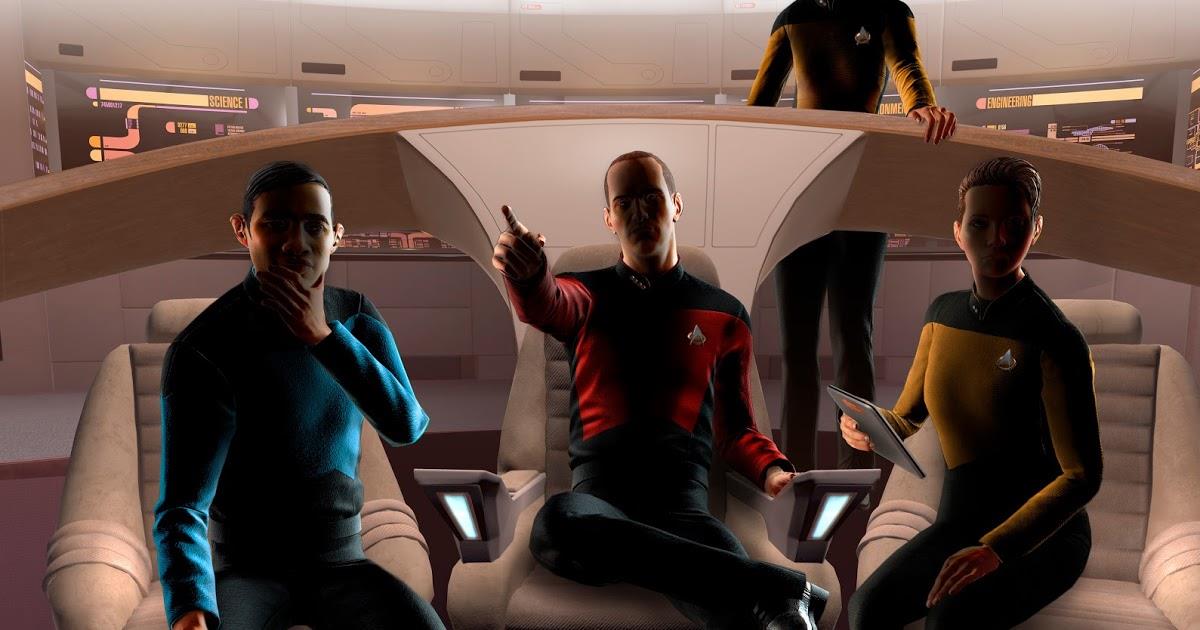 I was insanely excited when I learned of the new Star Trek: The Next Generation DLC, which was developed in secret and released last week as an add-on Star Trek Bridge Crew. As a life long Star Trek fan (my dad moved dinner away from the dining room table and into the living room so we could watch TOS in syndication for a few years of my childhood), Bridge Crew was already a geeky dream come true, giving players the ability to actually sit on the bridge of a Federation starship in VR, using teamwork to take the ship on a series of missions (and of course launch into battle). While I loved the base game, which took place in JJ Abrams’ alternate Trek Universe, I could not help but fantasize about what it would be like if developer Red Storm continued to add content to the game. What further adventures could be had in an expanded Trek universe? What wonders could be added to the base game if the developers supplemented the game with content from each iteration of the television series? The new Next Gen DLC, while not quite reaching the stellar heights of the original title, does help shed some light on what that reality might look like.

My son, whom I have raised (brainwashed) into being a Star Trek fan like myself joined me and a rotating cast of strangers on the shiny new bridge as we took the Enterprise E out of space dock and into the trench (the wild and untamed area that players explore in the base game, which is apparently still having issues 78 years later).

Over the course of our missions, we went on a randomized missions, doing routine patrols of a sector in space, escorting scientists from location to locations, and engaging in (and losing) no-holds-barred battles with the Borg. So, how does Star Trek Bridge Crew feel while playing the game with Next Generation trappings? Very much like playing Star Trek Bridge Crew (which isn’t really a bad thing).

The bridge of the Enterprise E, while beautifully modeled, is much smaller than one might assume from watching the TV show. Beyond the four command positions occupied by players, the only stations that are manned are the first office’s chair (a Vulcan who can’t be bothered to put out fires even though the bridge is burning down around him) and the counselor’s seat (a human woman, who strangely refused to look at me and spent the entire series of missions staring at the floor). The rest of the bridge is strangely abandoned. 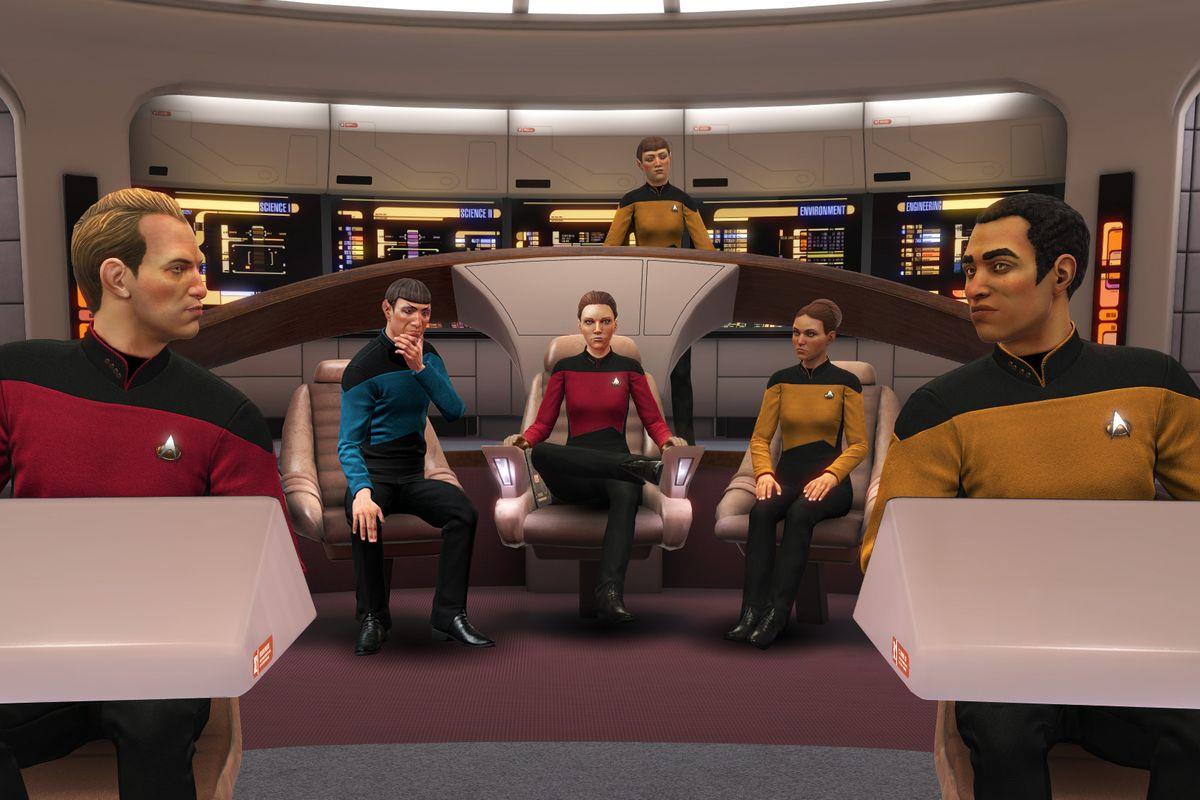 Tactical is now located behind the captain (the Worf position), with Helm on the front right and Operations on the front left (the Data seat). Tactical and Helm play much the same as they do in the base game, with a few differences. Tactical is no longer able to assist Engineering/Ops by using the transporter system, instead focusing strictly on weapons and scanners. And the entire DLC seems to be stripped of the function that allowed you to hack into opposing ships to disrupt their systems, making battles much more challenging. Not having the ability to shut down an opponent’s engines or weapons raises the stakes (and the challenge level) considerably. The captain’s position is largely the same, with the majority of the buttons remapped to a pad that the captain clutches in their right hand, making it difficult to pull off one of my favorite Bridge Crew maneuvers (throwing my hands in the air, and waving them like I just don’t care). 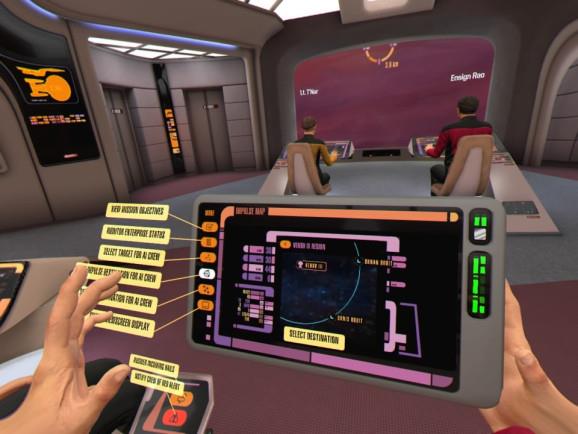 Operations is the position that has been changed the most dramatically, and it was entertaining to listen to whoever was playing that position totally freak out about it. In addition to the standard responsibilities (rerouting power and handling transporter duties) the Operations officer now has the additional challenge of directing workers to different areas of the ship to do maintenance and repairs on different systems. As there are not any additional training modules added to the game, players must take this position with no preparation, learning it on the fly. This leads to a fair amount of yelling a hilarity. “No, you clowns!” my son would yell while he tried to manipulate his Starfleet officers, as I sat safely behind him in the captains’ chair, making unreasonable demands. “Go the other way! Why won’t you move?” “More power to the phasers,” I would say. “I’M TRYING!” he would yell. Good fun. 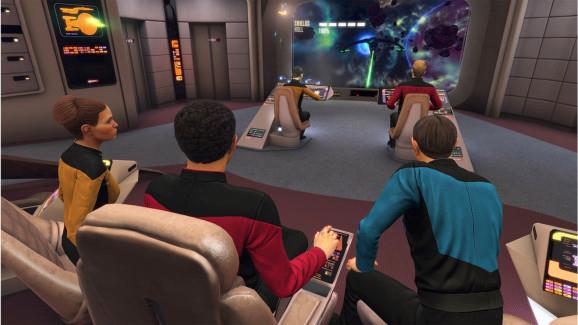 The missions feel a lot like they do in the base game, with a few new elements thrown in. While on patrol one time for example, my crew was menaced by a “space ribbon”, which would appear in the distance and slowly surge towards us, bringing destruction with it. The “space ribbon” looks for all the world like the Nexus, that misbegotten plot device that the poorly-written Trek villain Soren seeks to enter in Star Trek Generations. Whenever the ribbon showed up, we were forced to drop whatever we were doing and scramble to fire up the warp engines and get the heck out of there. There are several unexpected surprises like this sprinkled throughout the trench, waiting to randomly wreak havoc on your ship and crew. The addition of Romulan ships also throws a wrinkle in the proceedings, as they can cloak their ships in the midst of battle, making it a hassle to track them down and finish them off. 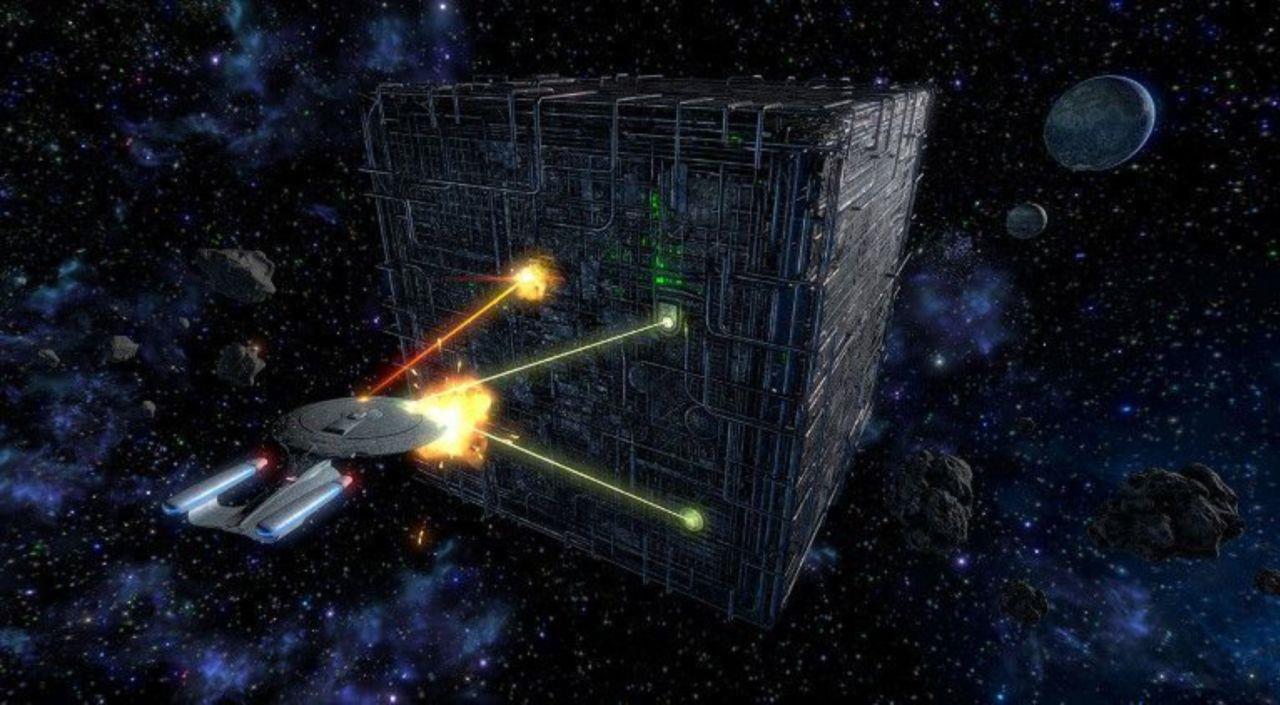 This difficulty with the Romulans came into to play when my crew took on the centerpiece of the new content, the Borg battle. During a battle with the Romulans, the Borg show up and do their usual song and dance routine, demanding surrender and stating that “Resistance is Futile”. If you attack the Borg, you can do enough damage to the cube that they will enter a brief period of repair. This hopefully allows your crew enough time to finish off the Romulans and pick up a piece of equipment you need to defeat the Borg. After that, you displace to a new sector, and the whole process starts again.

Over the course of the battle, you are constantly under the gun, with a timer counting down until the next time the Borg can begin their endless barrage of fire and death. When you reach a new area, you have a timer telling you how long you have until the Borg appear. When they are in repair mode, the timer counts down the seconds until the cube is fully functional, when it begins unleashing its insanely powerful weapons in your direction. With these timers in play, it is in your best interest to hustle through whatever you need to do to displace to the next area, which is why it is awful when one of those wretched Romulan ships cloaks and refuses to show its face. My crew spent precious minutes firing proximity torpedoes, trying to take out one last Romulan before we could move on, and the swearing was loud and raucous. When we finally did manage to displace, we were horrified to find another Romulan battle waiting for us, and when the Borg reappeared, they had adjusted to our tactics, making them that much harder to damage. We never did manage to take the cube down, but we were treated to several spectacular scenes of the  Enterprise E exploding in space, the saucer section drifting slightly away from the body of the ship as the whole thing disintegrates in flames. 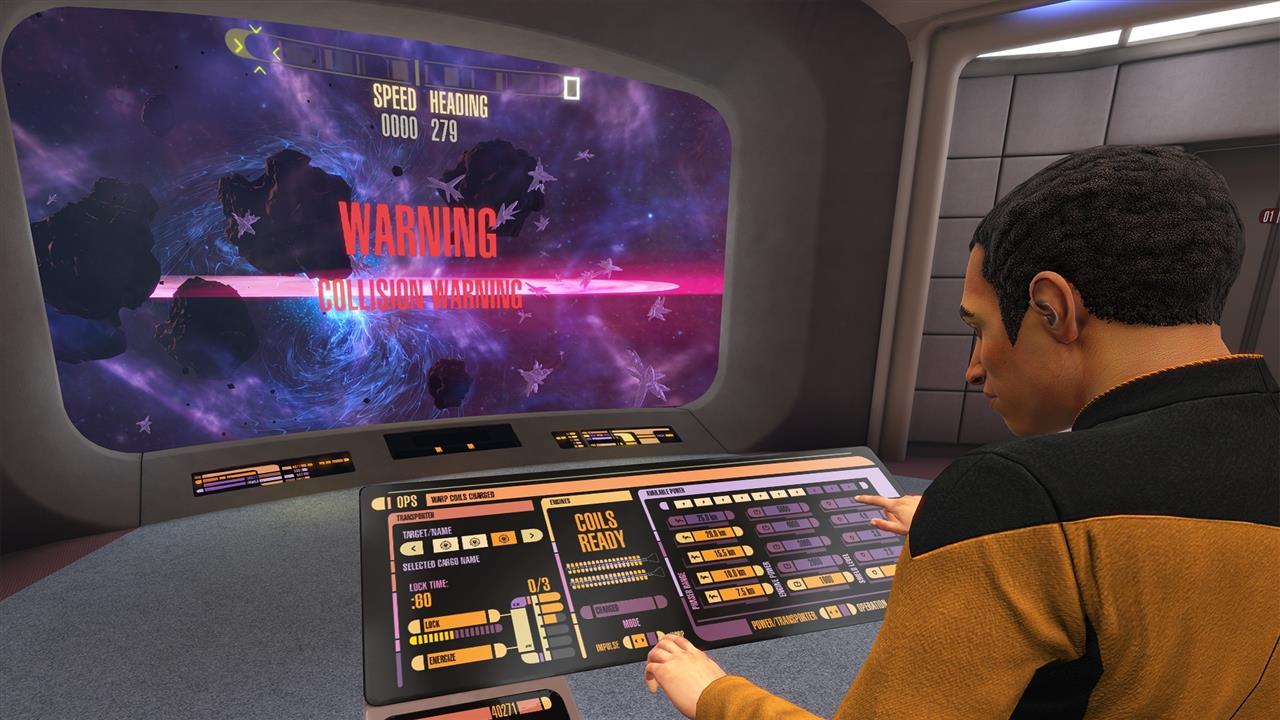 A funny side note, that has nothing to do with my impressions of the game: During one of my runs at the Borg battle, the person playing as my helmsman was clearly a teenager, who had been tasked with taking care of his younger siblings and had elected instead to play Star Trek Bridge Crew. During the tensest moments of the battle, my helmsman was torn between steering the Enterprise E and yelling his little brothers and sisters to turn down the hip-hop that they seemed determined to blare in the background. While battling with the Borg, I was also amused to watch this kid battle his siblings, who seemed intent on constantly reminding him that “Mommy told you to clean.” “I’ll clean later!” he would insist, while wrestling the ship around so that tactical could draw a bead on the Romulans. “But Mommy told you to clean yesterday, and you still haven’t cleaned.” An older Southern gentleman, who was playing Ops at the time, leaned over at one point and said “You should probably clean before your mother gets home.” “Fine,” the kid cried, “I’ll clean after to Borg Battle!”  And that’s why multiplayer VR is fun, folks. 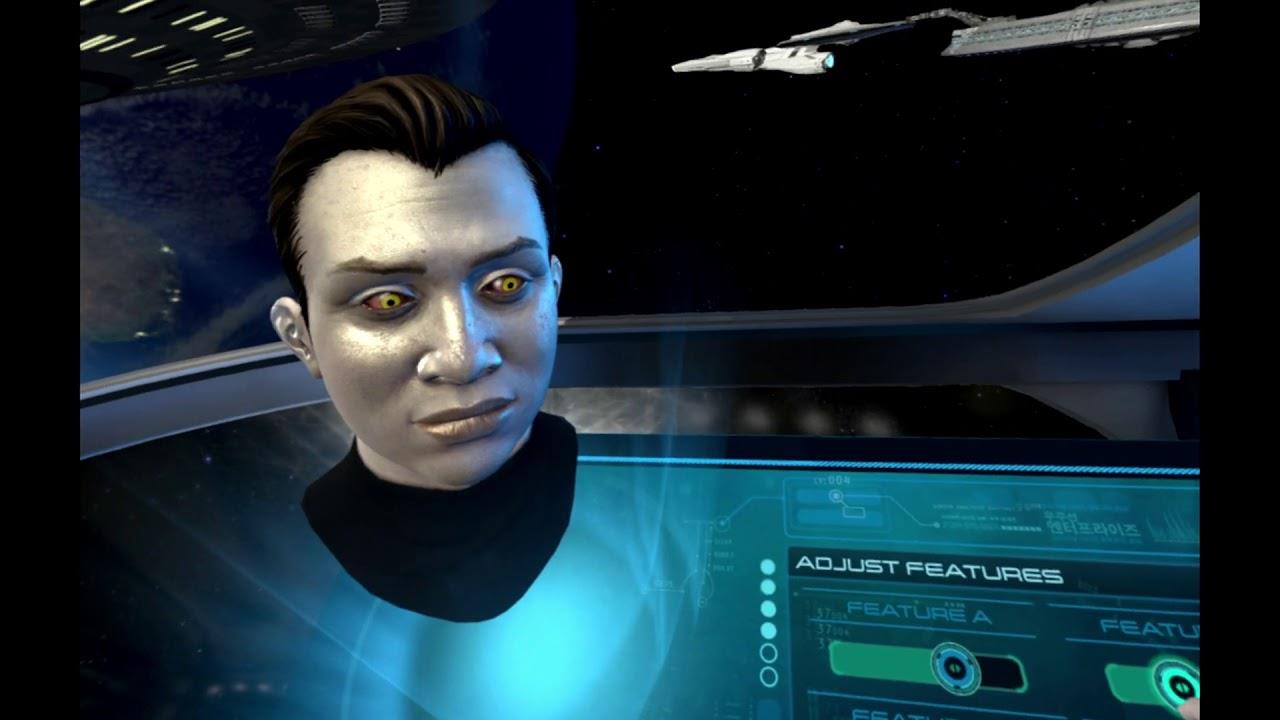 Beyond the new mission types, position parameters, and enemies (and the fact that you can now design and play as a Soongian android), there is not much else to the DLC. This is not a full new game, so there is no new campaign, nice though that would have been. The team at Red Storm added a lot of content to Star Trek Bridge Crew, but all that does is provoke my insatiable appetite for even more. It is a sad reality that providing fans with what they want just make fans demand even MORE of what they want. So, while The Next Gen is not a complete revelation, at $14.99, this DLC is a nice add-on to the base game. For those that enjoy Star Trek Bridge Crew, buying this should be no-brainer. Go ahead. Resistance is futile.

The new Star Trek: The Next Generation DLC for Star Trek: Bridge Crew offers even more of what made the base game fun: fantasy fulfilment and the chance to tool around the universe with some buddies on a Starfleet vessel. While there isn’t a ton that makes Bridge Crew feel different, it is fantastic to have some new enemies to fight, and fun to figure out how to navigate some new wrinkles in the bridge positions. After all is said and done, this DLC gives me more of what I love, and kudos to Red Storm for taking on that challenge when I thought they had abandoned the game and moved on. Now, can I get some Cardassians?