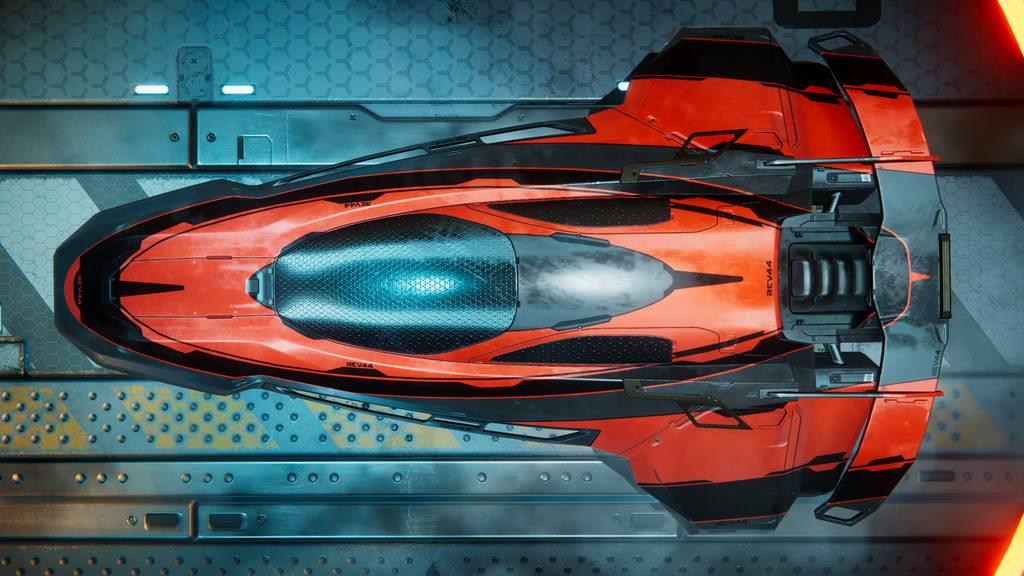 Written by Russell Archey on 6/14/2018 for PC
More On: Antigraviator

I consider myself somewhat decent at certain racing games.  While I’m terrible at more realistic games such as Forza and Project Gotham Racing, I’m pretty competent in games such as Mario Kart and Diddy Kong Racing.  Then you have the anti-gravity racers such as F-Zero where the goal to speed through each track as fast as possible without falling off, getting destroyed, or banging into every wall and barrier on the course.  I’m not going to lie, anti-gravity racers aren’t my best sub-genre, but I’m going to do my absolute best as I check out Antigaviator on Steam.

Antigraviator plays like other games in the genre such as F-Zero where you race against several AI opponents and try to outlast them.  There are a few different game modes with Campaign being the main mode so to speak.  Here you’ll race through eight leagues with four tracks each.  The game has thirty-one tracks including the practice track, but half of those are reverse versions of the tracks, so you basically have fifteen main tracks, fifteen reverse versions of those tracks, and the practice track.  Each of the four races in a league can be one of three different race types: Single, Countdown, and Deathrace.  Single Race is your standard three lap race, Countdown starts you off with a time limit and you can increase your remaining time by hitting various checkpoints scattered around the track, and Deathrace is similar to a standard race, but if your ship is destroyed the game ends.  Furthermore, after each lap the racer in last place is eliminated.

While it doesn’t matter where you place in each individual race, what does matter is where you place overall after all four races.  Placing anywhere from first through third will earn you credits which you can spend in a couple of ways.  However, to unlock the next league you must finish in first place overall.  This can actually be easier said than done.  Each track is full of twist and turns and for the most part the tracks do a pretty good job of forecasting upcoming turns and such, either by showing them on the horizon or having flashing arrows on the walls.  That doesn’t make things any easier though.  While flying through the tracks you can use the air brake to help take turns easier and you can also, I kid you not, do a barrel roll to help avoid traps and obstacles.

Antigraviator has traps which sounds like it would add a bit of Mario Kart to F-Zero…except that it doesn’t really work out that way.  At the top of the screen you’ll see a blue line that represents your position on the track and little blue ticks that represent traps.  As you approach a trap an icon will show up on your vehicle (which, by the way, is where your HUD is), you can hit a button to trigger it.  The traps are typically environmental hazards such as dropping rocks on the track or having lasers fire from the sky.  There is a catch to these though: only one racer can trigger a trap.  The racer who triggered the trap will get a temporary green shield that will shield their vehicle from damage, either by colliding with the walls, other racers, or any existing traps.  If you’re near a trap that was triggered you’ll see a red arrow near your vehicle that will show you where the trap roughly is so you can avoid it, but I’ve found that it really doesn’t help much and often times I’ll end up hitting the trap regardless as they’re scattered throughout the entire width of the track.  The traps are an interesting concept, but they kind of feel needless here with the high speeds that you’ll be racing with. 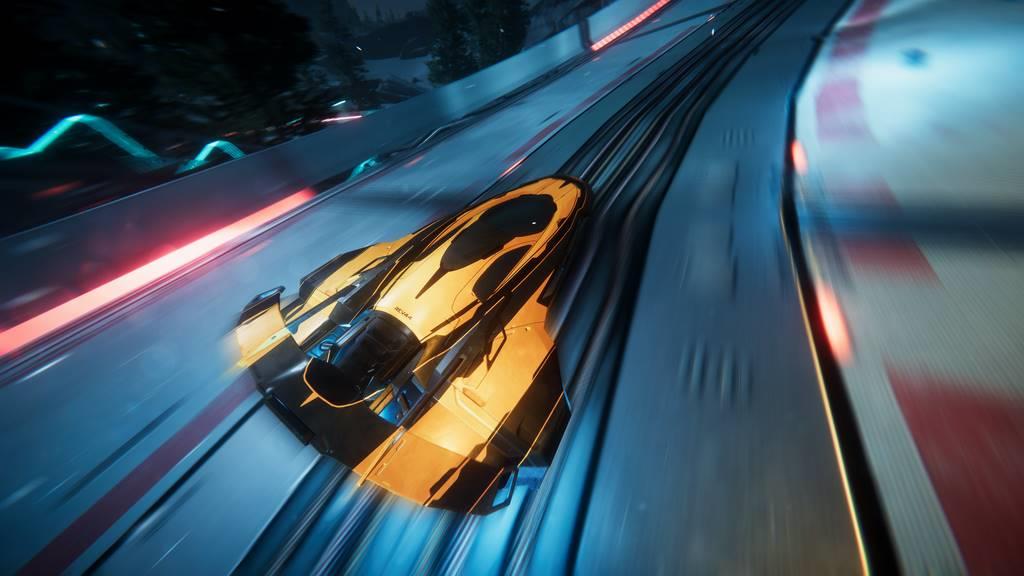 I mentioned earlier that you can earn credits by placing at least third overall in a league.  Those credits can be spent on parts in the Hanger to improve your vehicle.  Unfortunately, there aren’t a lot of options to choose from.  Thankfully you start out with about ten thousand credits so you can afford one of the smaller upgrades from the start.  I went with one that improved a couple of my stats, namely handling, without sacrificing too much else.  Needless to say it didn’t help all that much.  I was still constantly slamming into walls and while you can air brake to help navigate turns better, that also means you’re slowing down if you brake for too long.  I also had countless times where I tried turning, ended up in the wall, and even hitting the brake couldn’t pull me away from the wall, kind of like I was stuck there until I was almost stopped.  Grinding up against the wall, or actually having anything hit your vehicle, will damage it and the screen will start to flash red faster and faster.  If you don’t let up soon your vehicle will explode and you’ll respawn at that same spot, but it’ll cost you a few seconds.

The other use for credits comes with the leagues themselves in Campaign mode.  The first campaign is free to enter, which is nice as you have limited credits to start with.  However, leagues after that will require an entry fee…an entry fee that isn’t refunded if you don’t do very well…an entry fee that needs to be paid every time you wish to play that league.  This means that if you’re like me and have trouble getting good at the game (I’ll admit to my own faults in these situations), you might finally get first in the initial league, but then completely fail over and over again at the next, spending all of your credits (or blow them all on upgrades and not have many left for the league itself).  Since placing at least third in a league is the only way to earn credits to my knowledge, you might have to go back to the first league and play it a few more times just to get more credits to continue through the campaign. 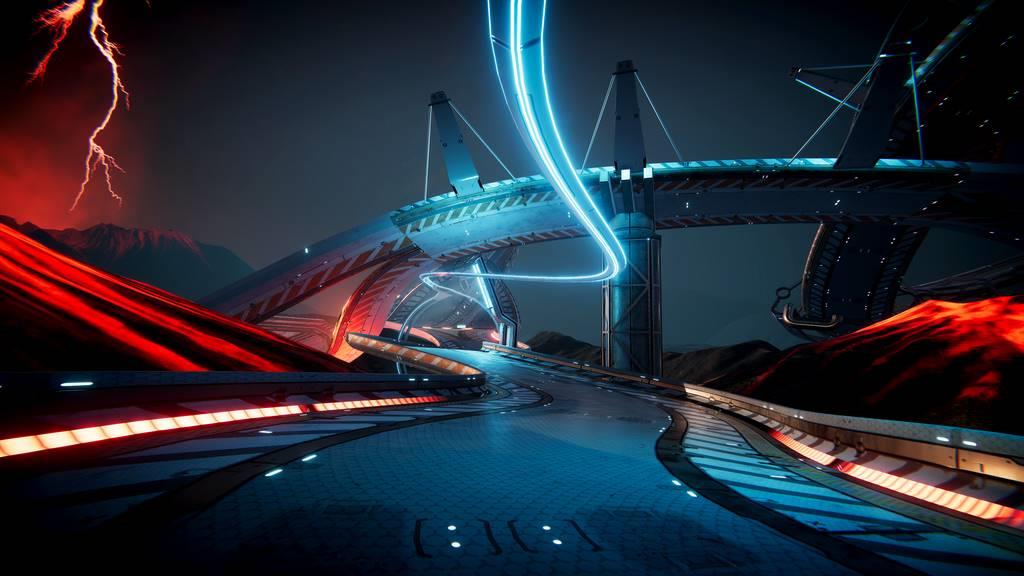 The other game modes include a quick race option where you can choose any of the thirty-one tracks to race on (including the practice track) with up to seven AI opponents and you can change their difficulty (you can also play with friends locally).  You can also do an online race against friends or random people, though I tend to have trouble getting into a race.  After about three minutes of searching for a ranked match, it’ll basically time out and prompt you to search again.  I tried this a few times on several occasions and rarely, if ever, got into an online match.

Antigraviator is a fun game once you get used to it, but there are a few things going against it.  The way credits work means that earning credits just to keep going in the campaign can get very tedious.  I don’t mind having to get first in a league to unlock the next, but I feel that the credits requirement can be a set back to people who might not be that good yet, but really don’t want to have to replay the first league several times over.  I can also do without the traps.  Items in games like Mario Kart and Diddy Kong Racing work really well because it’s you firing the items from your own kart and you can typically see some items placed on the track in time to try and avoid them.  Here though the traps are placed around the track and you might not even have the chance to trigger them before someone else does.  Plus they kind of bring the race to a screeching halt if you hit them, and in a game that plays similar to F-Zero, that’s not really a good thing.  If you like anti-gravity racers and don’t mind a few hiccups here and there, you’ll probably still like Antigraviator.  For me though, I’ll probably stick to F-Zero for my anti-gravity fix.

Antigraviator can be pretty challenging for those not familiar with anti-gravity racing games such as F-Zero.  There aren’t a lot of upgrades for your vehicle and requiring credits to attempt later leagues can be a bit detrimental as you might have to replay the first league multiple times just to grind credits.  The traps are also not really my cup of tea and I could do without those personally.  Beyond that though, Antigraviator is a solid game, but it’s not for everyone.