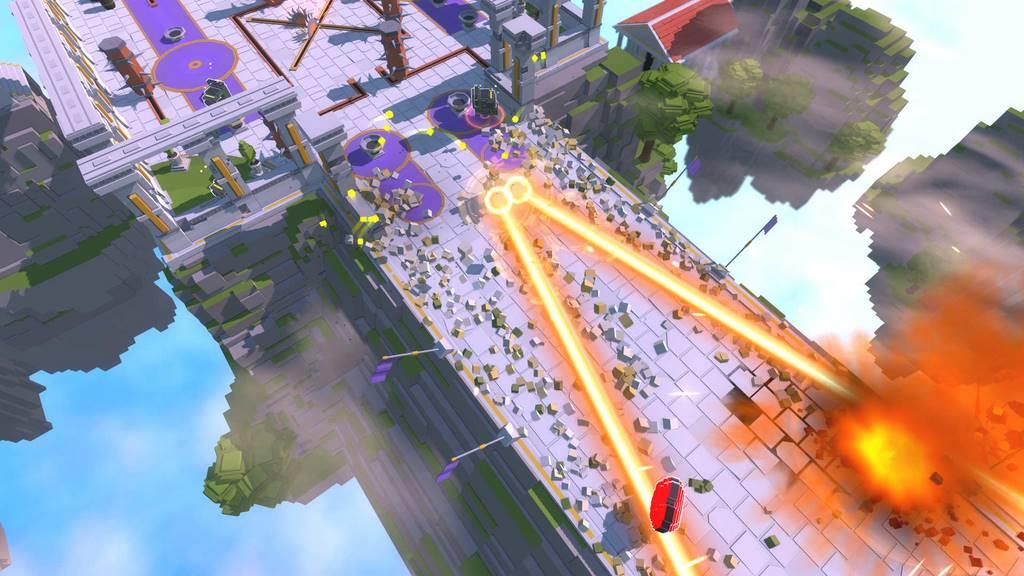 Written by Russell Archey on 6/29/2018 for PC
More On: I Hate Running Backwards

Shoot-em-ups have been around since the days of arcades.  Simple games that typically have you moving around at the bottom of the screen while firing upwards at anything that comes towards you.  Others are side-scrollers but retain the same concept.  Simple to play but usually difficult to master, shoot-em-ups are some of the best games out there…so leave it to the creators of Serious Sam to literally turn that idea on its head.  Today I’m going to take a look at what could be the start of a new genre with the shoot-em-down game I Hate Running Backwards.

The story of the game is simple.  It takes place in the Serious Sam universe and you play as one of twelve different characters, nine of them having to be unlocked throughout the course of playing, and hunt down one of Mental’s subordinates named Ugh-Zan which has been sent to the future to stop the heroes from fighting Mental.  Sam and the other heroes must travel through time to defeat Mental’s minions.  Most of the characters all come from other Digital Devolver properties and play differently from each other.  Characters have various starting life and power as well as other certain quirks such as different movement speed or ultimate attacks.

Gameplay takes the form of a top-down shooter where your character must move around and take out any enemies that come from the bottom of the screen.   All enemies have two primary weapons they can use (save for The Bullet from Enter the Gungeon which only has one) and you can swap between them at any time provided you have ammo for them.  Should you run out of ammo for both of them you’ll resort to a standard low-powered pistol.  You can also swing a hammer which will damage enemies and deflect most projectiles, but there’s a second of so recharge delay between swings.  You can use the hammer to open up the long chests you see in each stage to pick up special weapons.  There are thirty-four of these that you can find that range from a drone that fires shots every second or so, to ice grenades, to land mines.  Ammo pickups are scattered throughout the stage so unless you just hold down the fire button you should typically be good on ammo.  You can find ammo for both of your primary weapons as well as your special weapon if you have one.  Other power-ups include a temporary increase in power, a shield which can take a few hits before going away, and temporary infinite ammo for your primary weapons. 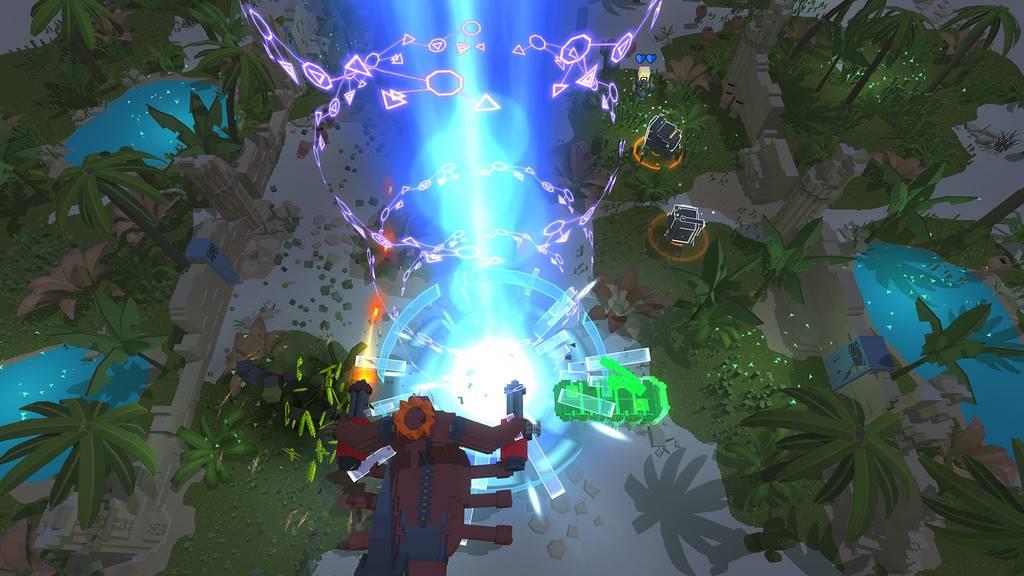 As you progress through the game you’ll see two gauges begin to fill up, a yellow gauge at the top and a blue one on the right.  The blue gauge will vary in its use depending on the character but this is basically a character’s ultimate attack.  As you take down enemies it’ll start to fill and once it’s filled for most characters, you can unleash a pretty devastating attack.  For some it might be a screen-damaging blast, for others it might be a multi-use attack like powerful grenades.  The yellow gauge is your experience meter.  As you defeat enemies this begins to fill as.  You can also use your hammer attack to destroy most of the terrain you come across to collect a bunch of yellow dots to fill the meter even more.  When the meter is full you’ll be presented with three perks from which you can choose one to have for the remainder of the current run.  These can range from longer hammer swing duration, more special weapon ammo on pickup, more power for the standard pistol, and so on.

Each area is procedurally generated, meaning it’ll be different each time you play.  At the end of each area you’ll come across a boss fight.  Defeating the boss will net you a lot of experience and likely enough to give you a new perk if you didn’t just recently get one.  After clearing all five areas and taking down the final boss, you’ll enter a portal that takes you back to the start of the game for another loop.  This time though things will be more difficult and enemies from any stage can appear at any time.  Beating the bosses also has another…well, I use the term “perk” loosely here.  After choosing your character but before stepping into the portal to begin the game, you’ll see several pedestals with switches you can hit, but only one is available at the start.  That one puts the game into Easy Mode, gives you an extra heart, and makes things a bit less difficult.  The others will unlock as you defeat the bosses and will give you “curses”.  These curses will give you bigger score multipliers once your run is over, but they introduce different environmental hazards to the stages such as pools of acid or missiles dropping out of the sky. 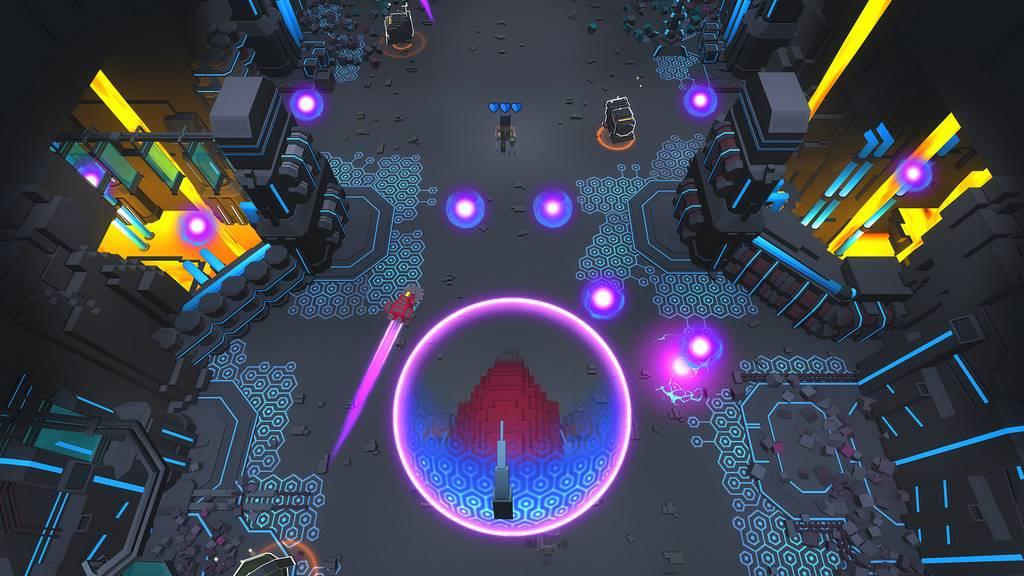 When I played my first several rounds of the game, I was starting to get that feeling of “is this is?”, but the more I played the more I started to enjoy it.  That’s not to say the game is perfect by any means.  The above paragraphs literally describe the entire game for the most part.  Once you eventually die you can restart from scratch and after defeating a boss you’ll unlock a shortcut to the next area (it’ll be in a building or cave off to the side at the start of an area).  There is also a vehicle section here and there, but they came up so rarely in my playthroughs that they really seem out of place with everything else.  However, there are a couple of other modes to keep things interesting to an extent.  The first is a Daily Run where you play as a random character, even one you might not have unlocked yet (which by the way, I can’t tell how to unlock most of them, it just seems to happen at random), and do one run to get a high score for the leaderboards.

There’s also a local co-op multiplayer mode but while this looks like it would make things easier, it actually kind of makes things harder as you’ll both be fighting for ammo pickups and if you both like to just keep the fire button pressed for most of the game, you’ll be running out of ammo a lot.  Then there are the special items and weapons you’ll be fighting over as well.  The other mode is rather interesting: Twitch Mode.  While I do like to stream now and then on Twitch, I never got the chance to check this mode out for myself, but it actually lets people in chat press various numbers on their keyboards to spawn enemies during the game.  That is actually pretty cool and I do plan to take that for a spin in the near future.

I Hate Running Backwards is a fun game, but I can see where people have mixed feelings on it.  The game isn’t all that long to go through a full loop, but there are a dozen characters to use and each has their own play style.  There is a co-op mode, but you’ll be fighting for pickups, specifically ammo.  Vehicle sections can shake things up a bit, but they can be so sparse that they seem out of place.  This is a game that can be played in short spurts as a full loop won’t take much longer than a half hour or so.  To be honest, I’m more on the positive side of those mixed feelings.  Then again I tend to be an optimistic gamer for the most part.  For $14.99, this is a pretty good game and one I’ll fire up again now and then.

I Hate Running Backwards is a fairly good game, but I can also understand people’s mixed feelings about it.  The game is basically a thirty minute top-down shooter (if you can survive that long), but the further you progress, the more difficult you can make it if you wish.  Add in a dozen characters to choose from across Digital Devolver’s games and there are plenty of ways to have fun taking down Mental’s minions.