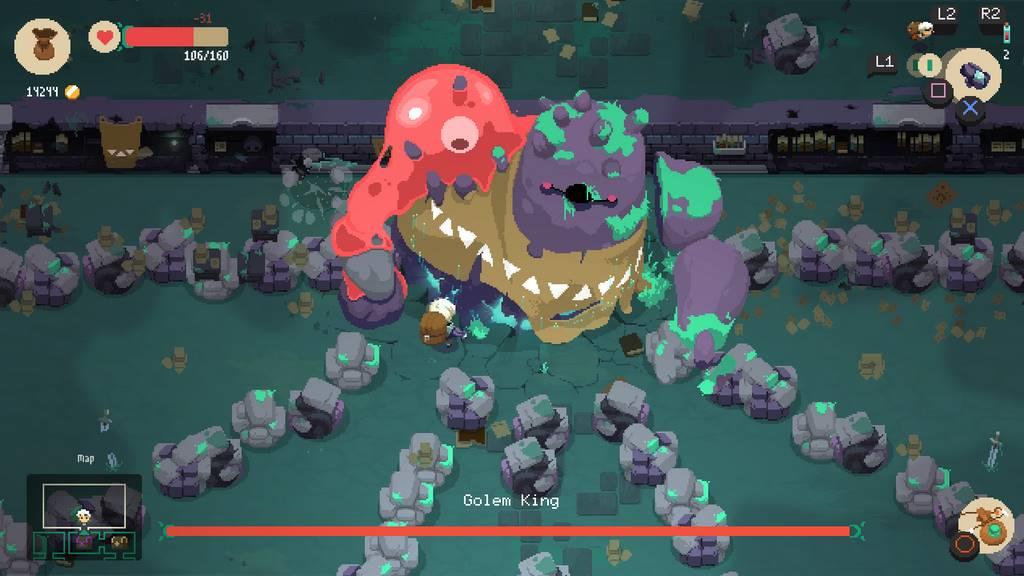 Moonlighter opens in media res, with you already at the mouth of a dungeon—the Golem Dungeon. I play as Will, a young merchant with a strong desire to dungeon-crawl despite that fact that I only have a broom that I’ve sharpened into a crude spear. It’s not hard at first; I’m stabbing my way through a plethora of mini-monsters and feeling pretty good about myself, until I reach a dead end—one that won’t. Stop. Spitting. Out. Monsters. I’m kiting around roughly forty of the things before they finally knock me out. It takes me embarrassingly long to realize that it was all scripted.

The next day, though, I’m up and ready to go again. Armed with only a sword and shield that my mentor Zenon gives me (despite the fact that he wants nothing more than for me to stay home and run my family’s shop) I dive into the Golem Dungeon, the one that had spit out my battered body just the previous day, because I apparently haven’t learned. I’m proud of myself at first; I overcome the slow response speed of the sword and shield (given it’s my only option right now) and hack and slash my way through the little enemies of the dungeon, gathering some loot. Honestly, I have no idea how much it’s worth, but my bag is stuffed full of goodies, and I’m ready to portal out and bring it back to my shop. But I have one more empty slot in my inventory, and it’s taunting me, so I decide, “Hey, why not one more room?”

As luck would have it, Moonlighter serves my own greed back to me on a plate, and I find myself kicked out of the dungeon without any of my hard-earned loot, save for what had been in the first five slots.

The first few times I repeated this cycle at the beginning of the game, I could feel my spirits sinking. “Oh,” I said to myself, “it’s one of those games.” To be fair, the game had suggested that I use a controller rather than my keyboard, and I foolishly chose to ignore it, but the initial lack of intuitiveness of the keyboard controls almost turned me off from the game entirely. There’s no mouse usage in this game, even in your inventory or menus. Like, at all. The keys make little sense at first. I for close? L for back? J for pick up? They’re all in one place, so you don’t have to move your hands much, but it was just unintuitive enough to stifle my enjoyment of what was, from the beginning, a gorgeous-looking game. 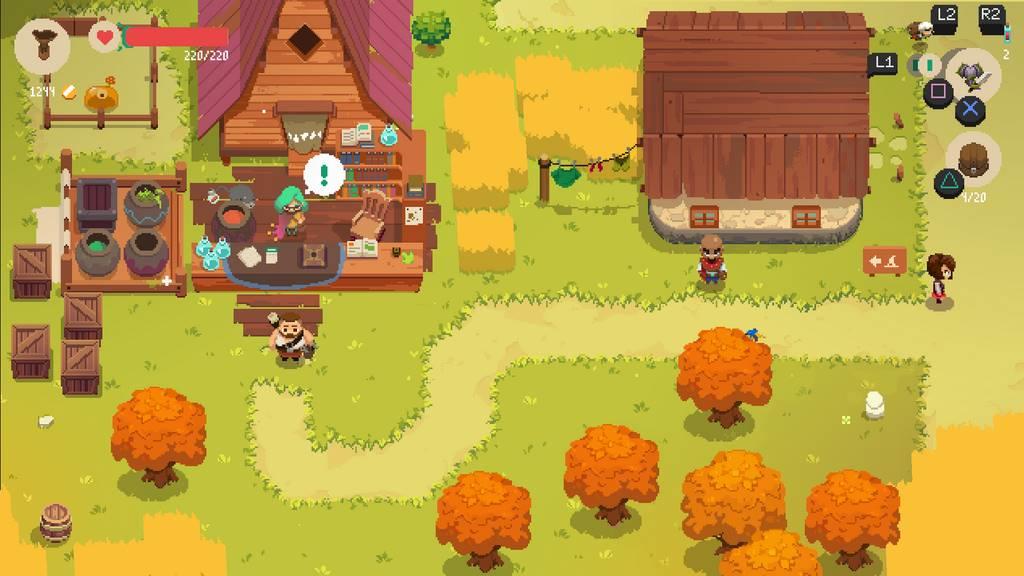 Eventually, I built up enough gold with what I managed to haul out of the Golem Dungeon to sponsor a blacksmith, and in a matter of minutes Andrei was set up near my shop waiting to make me some better gear. I gathered materials to make a weapon more my speed—a spear—and at that point, the entire game took an immediate turn for the better. Suddenly, I was making it out of the Golem Dungeon with a full inventory more than before. I was even delving deeper and deeper without too much danger, until I was finally able to reach the boss.

Each dungeon in Moonlighter (though only one is available at first) has three levels that are procedurally generated, so even though rooms may look familiar after a while you’re never stepping into the same dungeon twice. At the end of the third level is the Big Bad of it all, the guy you can only kill once, but will probably kill you a bunch of times. The first time I went far enough into the Golem Dungeon to reach this point (the Golem King, for this one) I promptly got my butt handed to me. The Golem King didn’t think my new spear was as cool as I did. The Golem King didn’t care that I would lose all of my Gold Runes and Empowering Crystals. 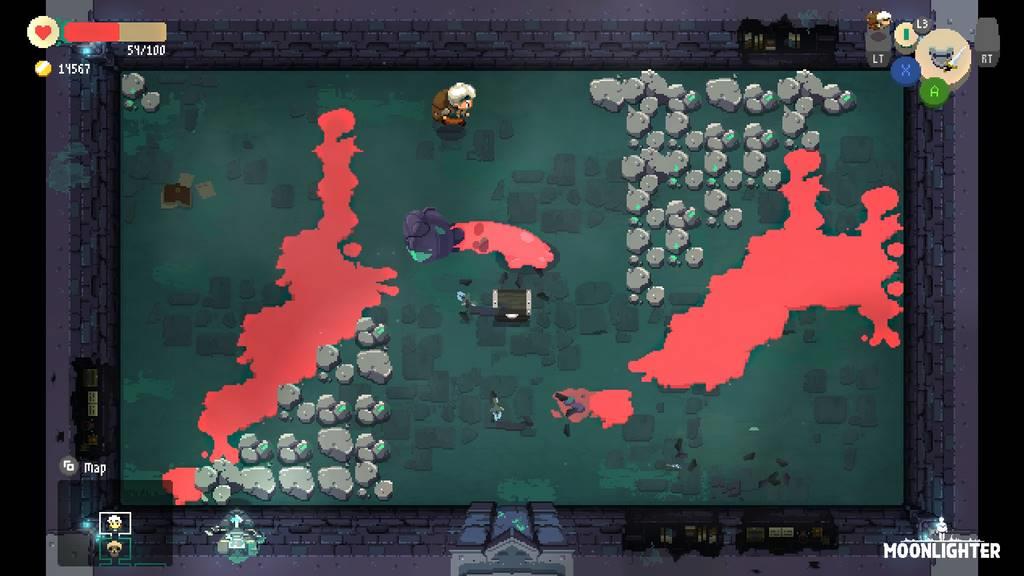 The loss was demoralizing, sure, but repeating the process over and over again was nowhere near the arduous grind I’d expected it to be at first. It was actually relaxing; instead of trying to plow my way to the end of the dungeon, I made a bunch of obligation-free trips to fill my inventory and return to my store. The game has three main mechanics, in my opinion, that make this repetition not only bearable, but fun: the procedurally generated dungeons (which I’ve already discussed) the inventory, and the shop itself.

Moonlighter surprised me with its inventory mechanics, which I initially thought were just going to be a pain. Some items you loot from chests in the dungeons have little pink and white icons on them, indicating what curses they have placed on them. Some turn items into each other. Some send items back to the shop. Some destroy items upon returning to town. Some destroy other curses while leaving the items intact. And with your inventory, what you get is what you get. There’s no expanding your backpack, so you’re forced to pull some clever tricks with what you can place where to maximize your space. I will admit, though, that the tiny item stacks are a disproportionately giant pain, especially when I’m coming from games like Skyrim (which I replay periodically). So my Dragonborn can hold 65 goat cheese wheels in one place, but Will can’t put more than 5 crystals in one stack? For shame, Will. You need to work out your core muscles. 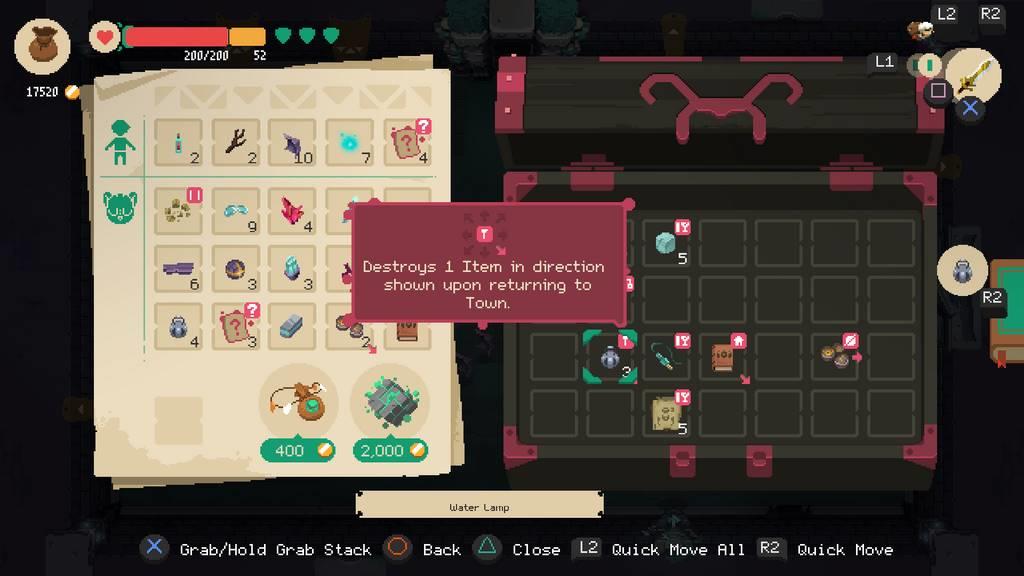 There are little secrets to discover that make the game feel so well-rounded, naturally. Sometimes there’s a brief twinkle in a chasm, prompting you to jump down and find a cool little hidden room or treasure. Other times, there are little safe rooms with journals for you to discover. Still other times, there’s a giant invincible green goo monster that spawns if you take too long, relentlessly chasing you through the level and brutally murdering you in one hit. Cute things like that.

Of course, it wouldn’t be a rogue-lite shopkeeping sim without a shop for the rogue to keep, would it? This is the part of the game that I was most dreading, but ended up being the part that I most enjoyed. You’re given enough of a tutorial to know how to change prices, but it’s only demonstrated on one type of item before you’re turned loose to set the prices for literally everything else you sell. The game records how people react to a particular price for a particular item—if they’re dismayed at your high prices, reluctant but still willing, totally okay with it, or ecstatic at their own savings (indicated by little faces). You want to hit that happy medium between too high (unhappy customers) and too low (losing profit). You can buy upgrades and decorations for your store that do anything from giving you more display room to making customers move more quickly. 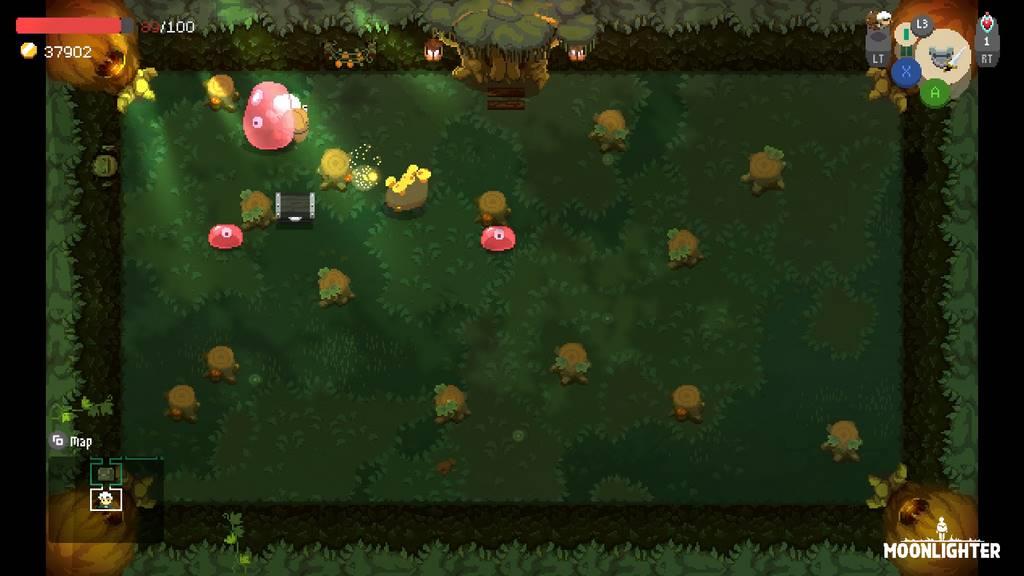 This, surprisingly enough, was my favorite part of the game (and it even softened the blow of having to leave the dungeon early with a full inventory, never making it to the final boss at first). At times, I found myself pushing through the dungeon bits just so I could get back to my store, sit back, relax, and open my doors to the public. I was lulled into a false sense of security until I upgraded my store and people started trying to rob me, but stopping them is a simple matter of seeing them when they come in and punching their lights out as soon as they grab some of my precious merchandise.

I will say, though, that this game isn’t huge. It isn’t replayable. It isn’t made for you to revisit again and again. It isn’t made to master. It’s a relatively short game, with forgiving penalties and relaxing setting. It’s not necessarily meant to be a challenge (even the harder difficulty settings aren’t too bad) that you spend hours and hours a day in—but if you’re like me, you might spend hours and hours in it anyway just because it’s a wholly enjoyable and relaxing experience. The soundtrack is amazingly diverse and well-written for a game of this relatively small size. The pixel art is wonderfully detailed, colorful, and just plain cute.

Honestly, I love this game. I’m a bit disappointed that I can’t customize my shopkeeper, and that I’m forced to play as a white guy (which hey—not everyone will want to play as a white guy, because there are kind of a lot of those around in games already). However, given the quality of the game, it’s easy to overlook. I don’t care about how much time I’ve spent in the game already for work; I’m diving back in for fun.

Moonlighter is a delightful rogue-lite shopkeeping sim game (because that’s a common combination) that can either take up one day of your time or multiple weeks, depending on your playstyle and preferences. If you’re looking for a mild challenge, but want to have an overall relaxing experience in a lovingly crafted environment, then I can’t recommend this game enough.