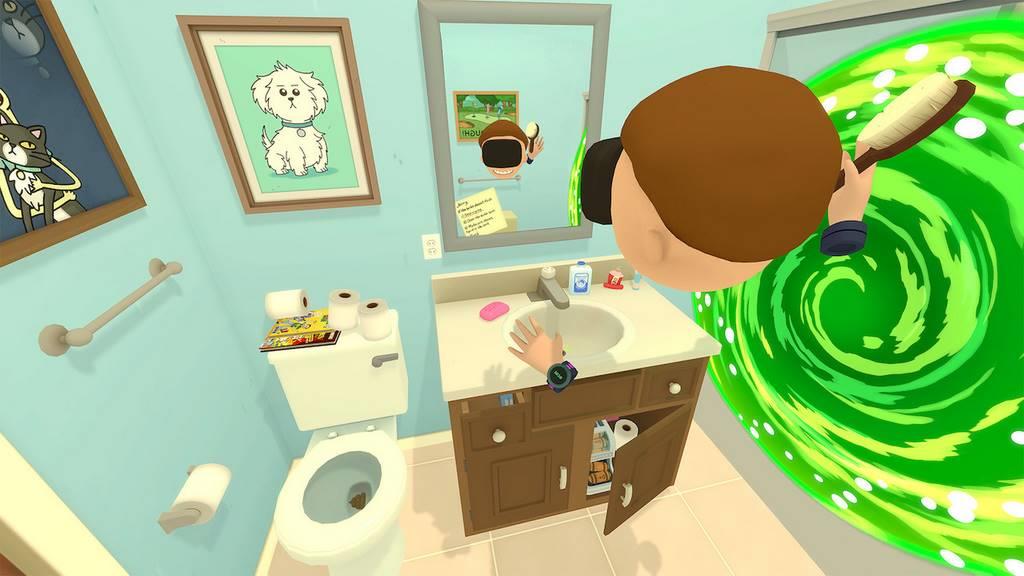 I hereby solemnly swear that I will not use any of Rick Sanchez’ catchphrases in this review. From this point on, there will be no “wubba-lubba-dub-dubs”, zero “schwiftys”, and absolutely no “Lick, lick, lick my…” well, you get the point.

I have to say this, because the use of these catchphrases when writing about Rick & Morty is almost expected by now. Like it or not (and you can count me in the “like it” column), Rick & Morty has become part of our cultural lexicon. And while some original fans may bristle at the parade of “bros” that showed up and rioted at McDonalds demanding Szechuan Sauce following last year’s season premiere, there is no mistaking that the show has remained consistently clever, funny, and dark. Regardless of how many unwashed heathen mouth-breathers have glommed onto its swelling popularity, the original appeal of the Rick & Morty is intact for those that want to engage with it on a deeper level.

Rick & Morty: Virtual Rick-ality, a VR title based on the TV show, was released last May on HTC Vive and Oculus, causing much grumbling from the PS VR crowd (who felt left out of the fun). After a year, the game has now appeared on Sony’s less powerful but more popular system. While it is a fun game with lots of fan service and doo-hickeys to play around with, there are some technical issues at play that threaten to cancel the good times.

Players take on the role of a “stupid Morty clone”, brought into being by Rick to assist with some menial tasks. Generally, Rick needs a pair of hands around the garage to handle stuff while he and the real Morty are flitting around the universe having adventures. As the Morty-clone, you are outfitted with a holo-watch on your wrist. In a neat touch, holding the watch to your mouth and speaking into it will contact Rick (and occasionally other series regulars), who will deliver instructions as to your next task, drop hints to help you along, and sometimes just flat-out explain the answers to puzzles. 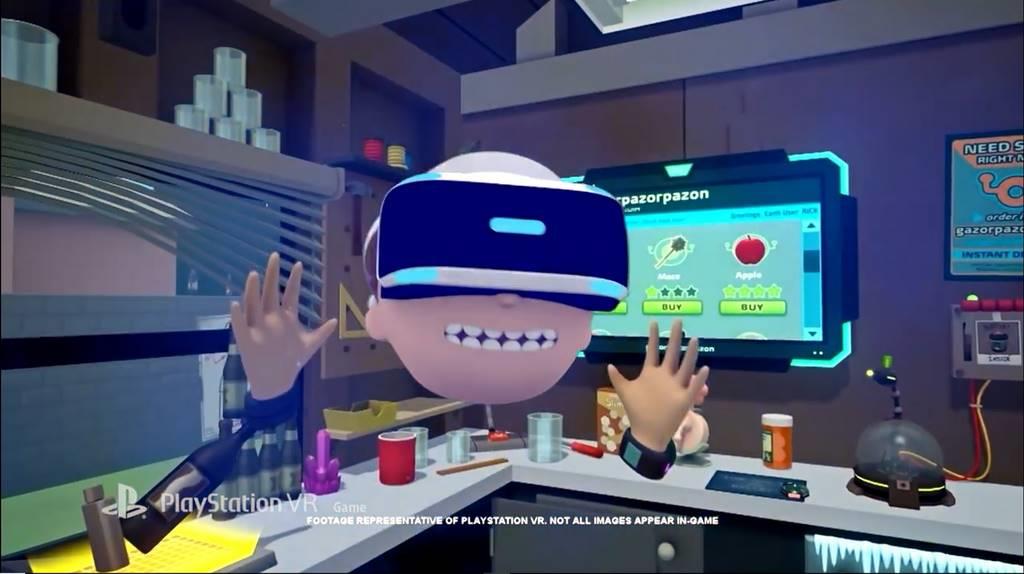 Rick has a series of crap jobs that he needs done, most of which involve solving various puzzles using objects and devices that can be found in the garage. Morty-clone has the ability to warp around between three areas of the garage, with the fourth quadrant committed to housing a whiteboard that contains sarcastic instructions. Some of the best stuff in the game is found while derping around the garage, playing with all of the gadgets. It is greatly entertaining to pull levers, push buttons, and jam stuff together to see what happens. This is one of those games that shocks you, because the developers anticipated every single dumb thing that you can think of to try, and they have provided an amusing response that is appropriate to the game world.

The brief storyline in Virtual Rick-ality occasionally opens up a transporter, allowing clone-Morty to briefly visit other exciting locations – like exotic alien planets, and the bathroom. Once you have visited another location, you are free to return to it whenever you would like, though the entertainment value varies depending on the location (the bathroom is actually one of the more interesting destinations).

The visuals in Virtual Rick-ality are awesome. Standing in the middle of the familiar garage surrounded by all of Rick’s gadgets is kind of mind-blowing. Both Rick and Morty (and Summer, on occasion) are fully rendered in 3D, and the transition from 2D hand-drawn character to full 3D model is seamless and natural-feeling. The writing and performances are, as expected, spot on. As usual for Rick & Morty, Rick has a secret motivation for everything he is doing and is managing the chaos towards his own selfish ends. The characters dip in and out of the garage, primarily to give you your next task, and to make fun of you for not being quick enough to figure out things that they consider obvious. I particularly enjoyed the moments when Summer, staring at her phone and generally ignoring the chaos around her, continuously hinted to Rick that the player/clone “is maybe defective”. 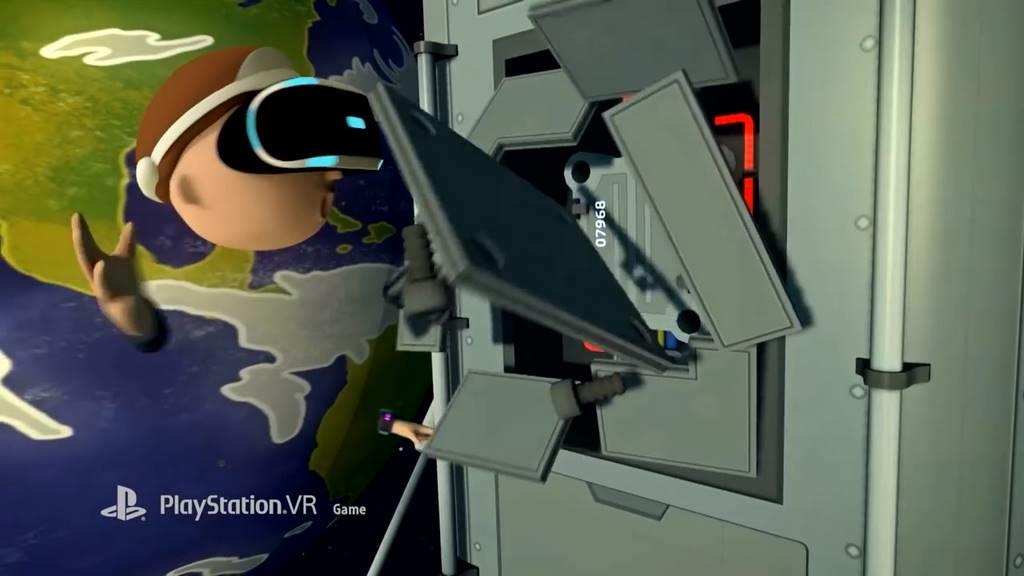 And that’s pretty much it. Play in the garage, solve small puzzles for Rick, find Easter eggs and secrets. The puzzles are amusing, and playing in the garage is awesome, but in the end, I just wanted more. The experience is pretty brief, though the game actively explains to you when the story is over that you are welcome to stick around to continue doodling with the toys and gadgets.

Speaking of the toys and gadgets, I am purposefully avoiding specifically referring to what any of them are, because discovery is at least half of the fun in Virtual Rick-ality. But I’m going to have to get into explaining at least one of these contraptions in order to properly express the technical issues that I experienced while playing Rick & Morty.

In the course of the game, clone-Morty is introduced to the “Youseeks”, which is very much like the show’s beloved character Meseeks, but instead of being capable of independent function, the Youseeks mimics the player’s motions. This allows you to toss a Youseeks ball to an unreachable area where an object could be lying on the floor, and then bend down and mime picking up the object, with the Youseeks actually performing the action. Then, with some careful contortions, you can get the Youseeks to hand the object back to you. You can even chain several Youseeks together to pass an item back to you, Smurf-style. This would all be fine and dandy, if “picking things up” worked worth a damn. 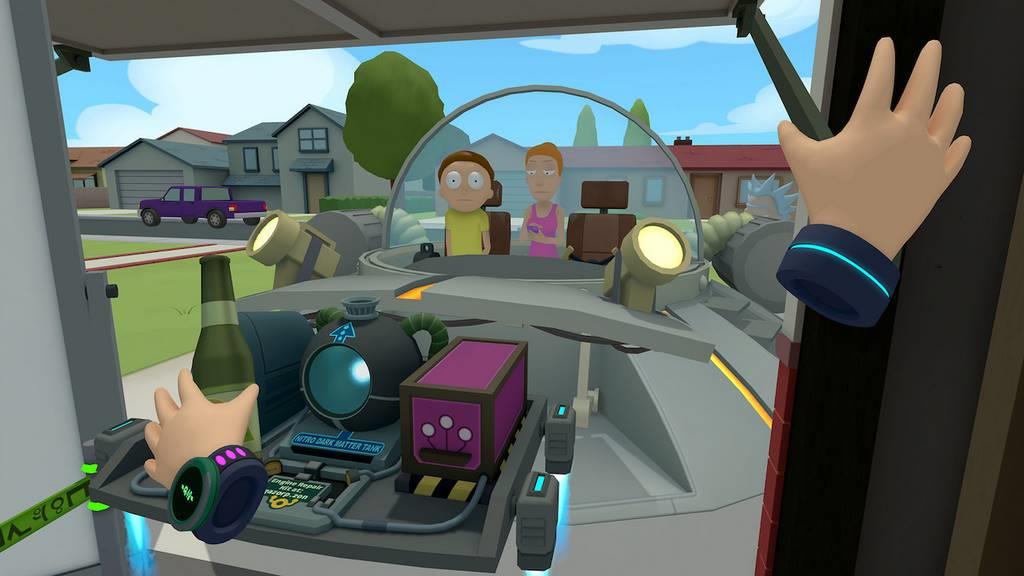 I cannot begin to explain the myriad of ways that “picking things up” in Virtual Rick-ality is broken. Because Virtual Rick-ality was designed for the Vive to be something of an open-room experience (and the PS VR version openly lectures you not to move around too much), objects get stuck in all manner of ways. I had objects get stuck under my real-world floor. I had objects get stuck in my real-world sofa. I had objects just get stuck period, refusing to respond when I tried to pick them up. Since you are pretty much locked into place (only teleporting between three positions), there is no way to adjust your location to gain a better vantage towards grabbing something. So I stood, jamming the move controller into the cushion of my couch, trying to grab objects that were embedded out of reach. This was especially frustrating when trying to use the Youseeks to grab things, as doing so offers something akin to a visual mirrored reflection of you while you flail around, failing to accomplish the action you are attempting.

Supposedly, holding your hand above an item will cause it to leap up into your hand, solving the issue. In reality, the garage quickly becomes a mess, with objects laying all over the place. The more you play, the more stuff ends up everywhere. This leads to a situation where you hold your hand out, and the wrong thing leaps up into your hand, over and over again. The only solution is to pick things up one at a time, then place the elsewhere until you clear the area of everything but the object you are trying to get. And then, sometimes, the object still refuses to leap up into your hand, and you want to throw things in real life. 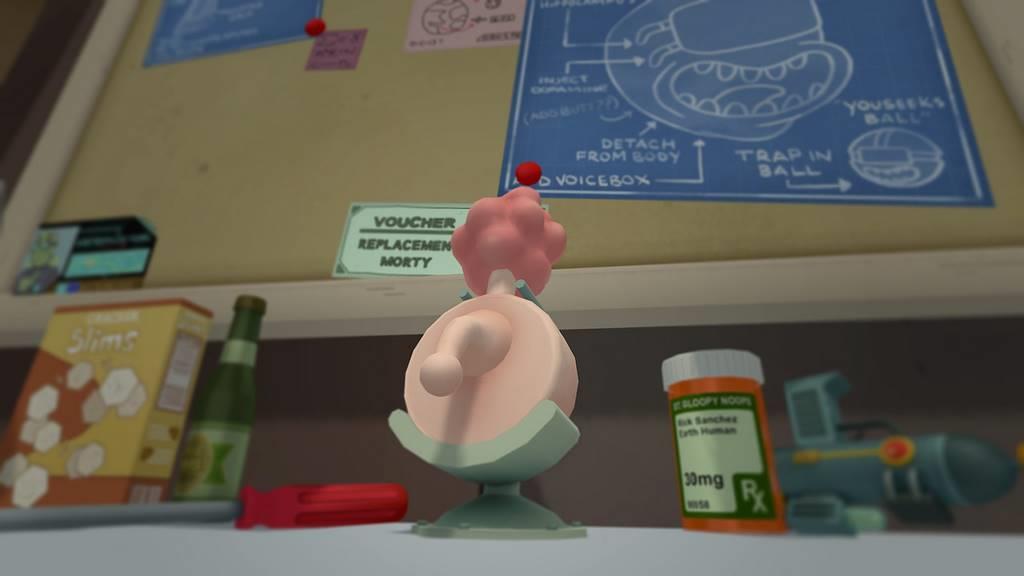 When loading the game, if you open the cupboard on the Start screen, there is a lever you can pull to engage “Giant Clone Mode”. I would strongly recommend giving this a shot if you are having similar troubles to me, as it seemed to alleviate some (but not all) of the issues I was having. Still, I only discovered this option through experimentation, and if I had not, I would have likely declared Rick & Morty “hopelessly broken”.

I enjoyed some of the time that I spent hanging out in Rick’s garage, but in the end, I liked Rick & Morty: Virtual Rick-ality more for the writing and the world building than the actual gameplay. The frustration of trying to pick objects up off the floor was so grating that the irritation I felt blotted out the enjoyment I experienced during the times that things actually worked as intended. It is fun to play around in Rick’s garage, but given all the difficulties I experiences, I would probably prefer to spend my time passively watching the show. For a game based on a franchise that is as popular and relevant as Rick & Morty, that's not very schwifty.

If Rick & Morty: Virtual Rick-ality were a discount title, I would say “Take a look, but keep your expectations in check.” However, this is one of the more expensive VR titles, and the brevity of the story combined with the frustration of some broken mechanics make this a mixed bag. The game is fun when it is working correctly, and the world building and writing are top notch, but don’t expect to spend more than a couple of hours in Rick’s garage, with some of that time spent wrestling with broken mechanics.