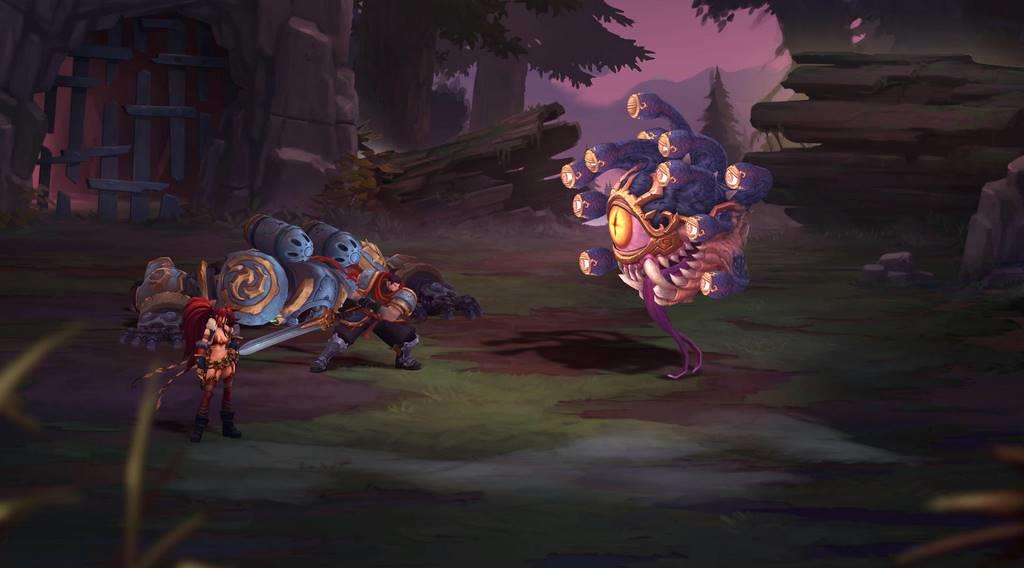 In today’s entertainment cycle, where we get a new Marvel movie every six months and Game of Thrones is the biggest thing on HBO, it’s difficult to remember just how tough it was to be a nerd back in the day. Big media companies actively court their fanbases these days, but try talking to Star Trek fans who endured the show’s cancellation back in the 60s and you’ll hear a different story. I think I’m one of the few remaining Perfect Dark fans hoping that Microsoft eventually does something meaningful with the IP. The same goes for fans of Battle Chasers, a popular but relatively short-lived fantasy comic series from the late 90s. After its final issue ran in September of 2001, there has been scant little for fans to survive on since.

But now Battle Chasers devotees are getting something few fandoms of obscure properties are lucky enough to experience: a comeback. In 2015 the original comic’s creator kickstarted an RPG based on his creation, and the result is Battle Chasers: Nightwar. Against all odds, this scrappy little RPG is one hell of a good time, and a fitting revival for a comic beloved for its striking art style and well-realized characters.

Nightwar begins with the typical RPG five-man-band party. Gully, a young girl entrusted with her dead father’s magic gauntlets, is accompanied by her robotic guardian Calibretto, her father’s old war buddy Garrison, and a snarky old mage named Knolan as they fly an airship to parts unknown. Along for the ride is Red Monika, a rogue who uses her charms and dual-wielded pistols to get the upper hand on any situation. The group’s airship is promptly attacked by bandits, and force down into a foreboding land renowned for its abundant supply of mana. Gully, Libretto and Garrison are separated from Knolan and Monika, and set out across hostile terrain to regroup with their missing party members.

I really like how each character pulls double duty, both in mechanics and personality. Gully is the impressionable youth of the team, but she’s also the primary brawler, leaping headfirst into battle to shield her allies from harm. Garrison is a paladin full-stop, inflicting grievous wounds with his massive longsword, but he also offers up sage advice from his many years serving as a bodyguard. You would assume he’s all brawn, rushing headlong into conflict, but instead he’s stoic, reserved and often holds Gully back from making rash decisions. 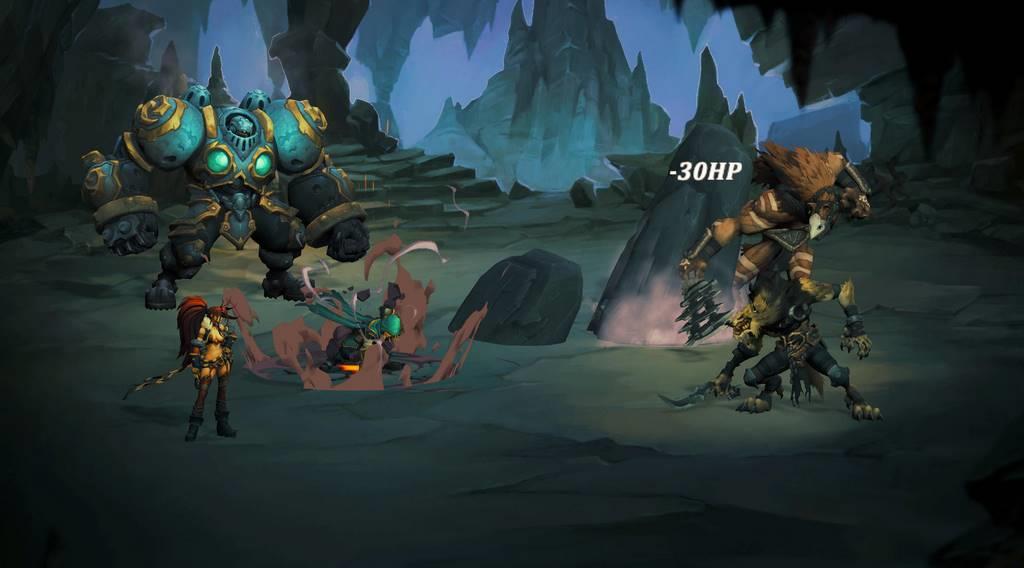 Calibretto would appear to be the natural tank of the team but he’s just as effective as a healer, if not more so. His hefty mana reserves mean that he’s usually on healing duty, dishing out barrages with his minigun-arm only when necessary. His quiet, thoughtful Commander Data-esque personality makes him the straight-man of the team, as he’s often offering dryly humorous commentary, and the fact that birds seem to enjoy perching on his shoulders only reinforces his contemplative demeanor.

Knolan has both the deep magic skills of a traditional mage and the snark of a bard. He’s old and wise but he has a mouth on him, and he seems more comfortable calling eldritch abominations up from beyond the veil than he is with casting HP spells. Red Monika is probably the most intriguing of the bunch. As a rogue you would expect her to have the smart mouth, but her self-serving ways are only the surface of her character. It’s implied she has some history with Garrison, and not the kind you might initially presume. It’s also kind of cool that the team’s rogue is more of a gunslinger or bounty hunter than a stereotypical thief.

Nightwar doesn’t just put a creative spin on its party members, but also on the combat. There are no random encounters, but on the world map you can seek out fights posted and certain intervals, and in dungeons any enemy will make a bee-line for you once they spot you. Combat is familiar to anyone who has played a turn-based JRPG. The three members currently in your party square off against 1-3 enemies, sometimes in multiple waves, with turn order helpfully tracked in the upper left corner of the screen. Each side takes turns landing attacks and performing other actions, and playing tactically greatly increases your chances of success. 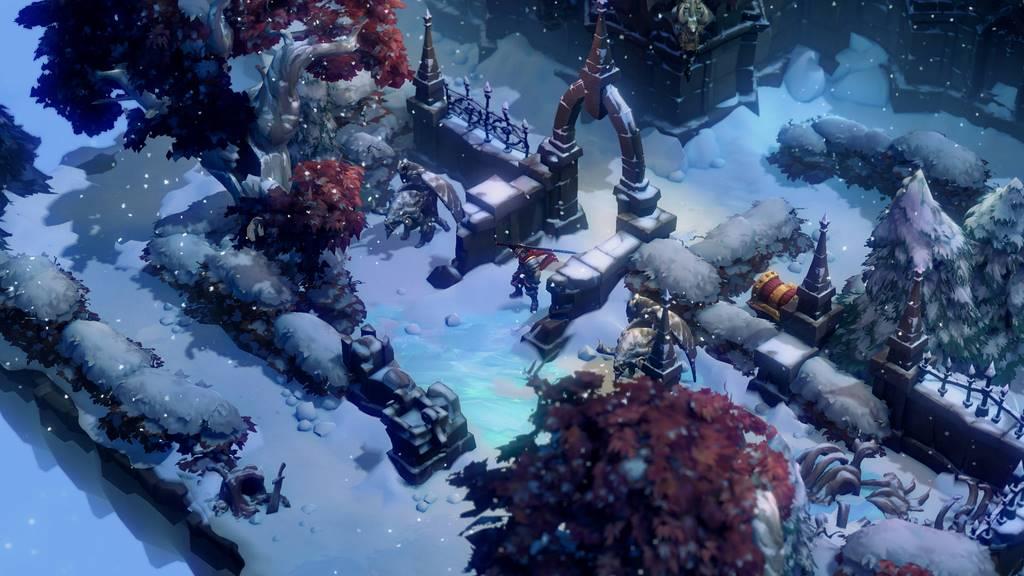 Each character has basic attacks, abilities which use mana, and defensive moves to buff damage resist. The more you level your party up the more attacks and abilities each member unlocks; for example Gully can acquire a move that aggros enemies against her, and Garrison gains the piercing “sting” attack that inflicts an HP-sapping bleed effect. As each member lands attacks and takes hits, they also build up “overcharge,” bonus MP that sits on top of each member’s base mana bar. This overcharge mana goes away after each fight, so using it strategically can give you a huge advantage during a fight, and mitigates the typical mana-drain that becomes a nagging problem in some RPGs.

Each member also has a “burst” attack that builds up over a battle, and letting one of these loose is a sight to behold. Calibretto’s burst heals the entire team for a leveled amount of HP and removes all debuffs; Knolan’s burst summons tentacles from the ground to lash the enemy team; and Garrison’s just lands a huge cleaving blow on the unlucky sap you decide to target. Like I said these burst moves take time to charge up but using them smartly can mean the difference between victory and costly defeat. Every time your party falls in battle they’ll wake up back at the town inn, and each time it costs more gold to come back from death. 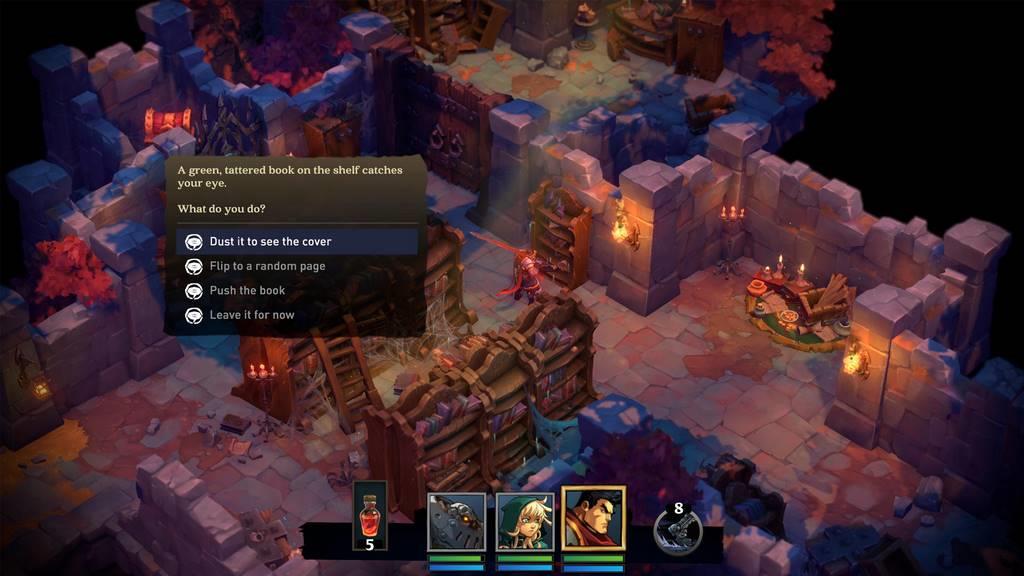 It surprised me how easy it was to get wiped out in short order. Battle Chasers isn’t a particularly hard RPG, but it doesn’t pull its punches either. It punishes carelessness swiftly, and as early as the second dungeon you really need to pay attention and take a strong tactical approach to combat. Of course you could always find a workbench and craft some potions in the game’s surprisingly deep crafting system (you can use spare parts to upgrade weapons as well) but guzzling HP philters will only make up for a certain amount of skill. Battle Chasers is a game that won’t beat you over the head, but it does take its JRPG roots seriously and offers a substantial challenge.

At the end of the day Battle Chasers is an incredibly solid, but fairly standard turn-based RPG. It takes many conventions and ideas of late 90s RPGs, most notably Final Fantasy, and puts an interesting spin on a few of those well-worn mechanics. It is not without a few problems; there is the occasional clipping bug, and the load times are way too long and could probably use some optimization. The game is a pretty typical JRPG when you get right down to it, and if that’s not your cup of tea then this game is not likely to change your mind. 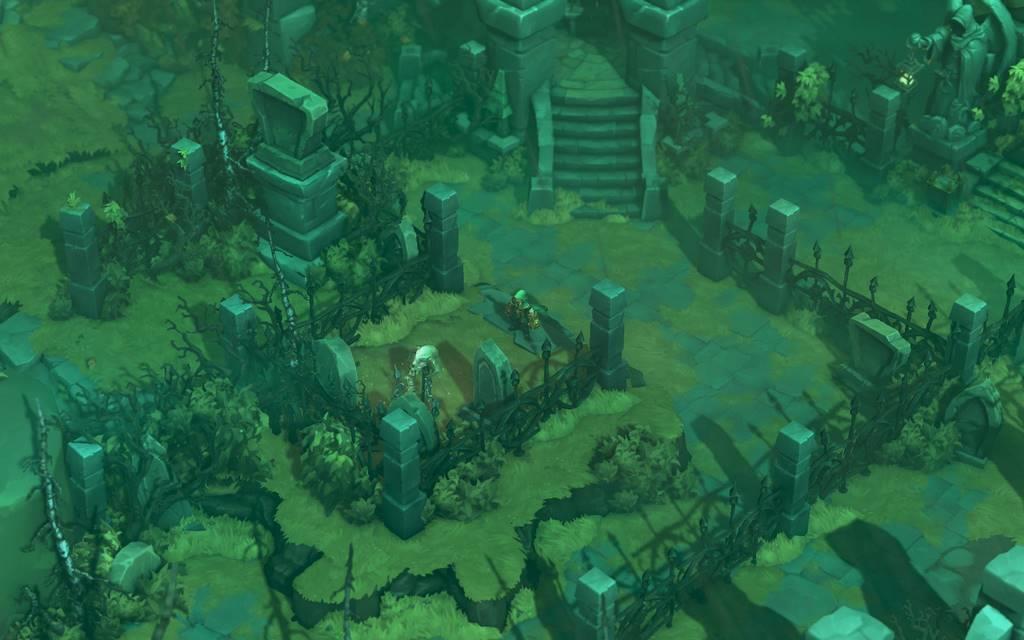 The magic, however, is in the production values and how this game pays homage to its source material. Character portraits mimic the Battle Chasers comic perfectly, dungeons and exploration sectors are drawn in a rich painterly style, and the overworld map looks like something sketched and watercolored by an old hobbit.

Far and away though, this game is animated beautifully. I was really struck by the characters and their vivid animations in combat, especially the lurid, indulgent burst attacks. More than anything, this game is a love letter to the long-suffering fans of the Battle Chasers comic. The game serves as a continuation for the comic and hopefully it will spark renewed interest in the property. That said, you don’t have to be a fan to enjoy Battle Chasers: Nightwar. It’s an incredibly enjoyable and decently lengthy RPG all on its own. My fiancée and I had never even heard of the comic, and we both thoroughly enjoyed the game. If you take a chance on this lushly animated title, we’re pretty sure you’ll like it too.

Battle Chasers: Nightware is pretty typical as far as turn based RPGs go, but its tight combat, beautiful production values and faithfulness to its source material make it worth checking out on Switch.