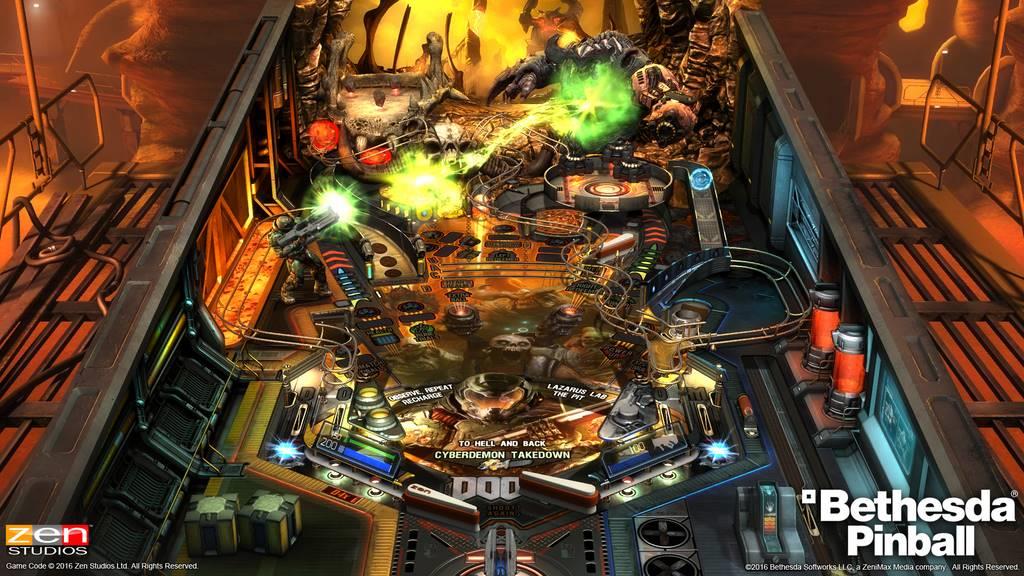 When pinball first came out it was pretty simple.  Hit the ball using the flippers, hit some bumpers, a few ramps, and score as many points as you can.  Over the years tables started having various themes to them and even started having goals to complete.  This would require a fair amount of skill to hit the proper ramps and spots on the table at the right times to score the maximum amount of points you could.  As pinball moved into the digital world of video games, developers could do more and more with new tables.  A while back I reviewed Pinball FX3 on the Nintendo Switch and checked out the tables that came with it.  Today I’m going back to look at three new tables that were recently added that are based on games from Bethesda.

The Bethesda table pack contains tables based on Fallout, Doom, and Skyrim and each table has their own goals and missions to complete.  As with the other tables, Single Player, Hotseat, Challenges, and Upgrades all exist in these tables.  For a quick refresher, Single Player and Hotseat allow you to play alone or with friends, with or without upgrades, while Challenges sees how many points you can get with a single ball, within five minutes, and just beating ever-increasing score targets.  Upgrades help you out with things such as increased combo timers, slow down the game, or even reverse time in case you need to save the ball when the game inevitably puts it straight down the center and you can’t do anything to save it yourself.  We’ve all been there before.

As for the tables themselves, each are tailored to their respective game in terms of mechanics and such…or at least as well as they can be for a pinball game.  The Fallout table begins with you actually creating a character of sorts including gender and skill points.  This actually comes into play, for instance Charisma reduces shop prices, Intelligence helps gain more XP to help level up, and so on.  You can earn CAPS to spend in the shop to cure radiation or wounds because taking too much damage means you’ll lose CAPS while radiation reduces maximum health as well as the amount of points you get from various activities…and yes, we’re still talking about pinball here.  You can hit every Vault Boy icon to enter Enemy Mode to take down various enemies, you have faction quests for the four factions in the game, and you also have a few vault quests you can do to help reach Wizard Mode to gain a special bonus depending on the faction you previously chose.  This is probably the most complex pinball table I’ve ever played, and I still have two more to go. 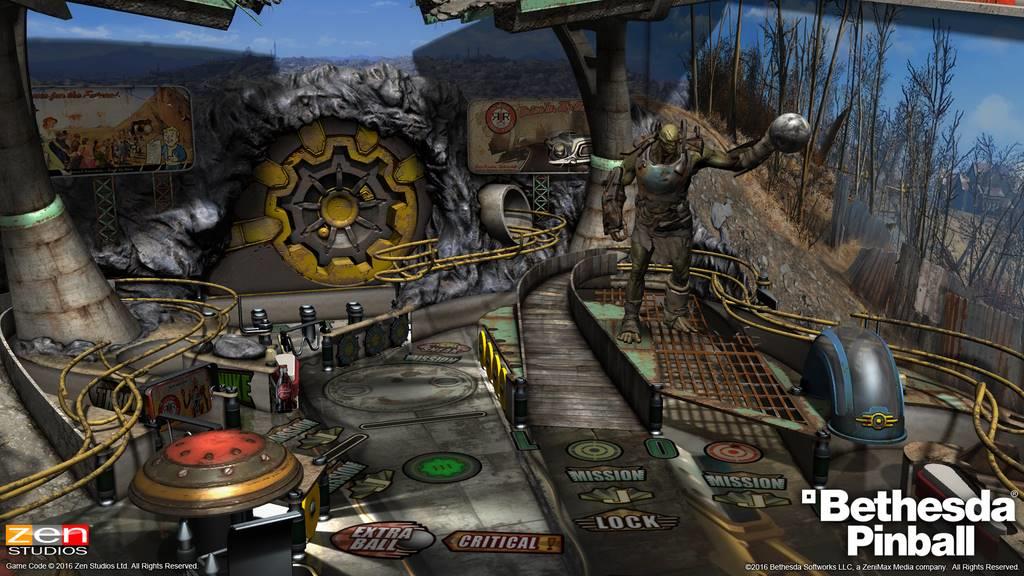 Next up is Doom which begins with you picking your difficulty between Hurt Me Plenty and Nightmare with Nightmare giving you increased scores, but you won’t have the advantage of kickbacks, extra balls, or even ball saves.  As with Fallout you have missions you can complete but they don’t have a timer; instead when your HP hits zero you’ll be revived with full HP and can try a new mission.  Completing a mission gives you an Argent Cell which you can use to increase your max health, armor, and ammo.  Other tasks you can complete are finding an hologram that is activated by shooting UAC targets and making other specific shots, recharging a generator, and even facing off against a giant Cyberdemon in the game’s Wizard Mode.  You’ll have to shoot it multiple times to defeat it, but the rewards are worth it.  That’s just the tip of the iceberg of what to expect with the Doom table.

Finally there’s Skyrim where the goal is to take down Alduin who has awakened.  After choosing your character you can shoot the ball into the center cave to begin the main quests.  You’ll have health, magicka, and stamina to manage and if you’re running low on health, you can shoot the left orbit at any time to replenish it.  What makes the Skyrim table interesting is that while exploring you can come across new places such as caves and towns.  The caves are actually in the form of a tiltable mini playfield where you have to find your way to the exit at the bottom.  While the goal of these is to find your way to the exit, you can also explore the caves a bit to find some gold, treasure chests, or possibly even an enemy or two. 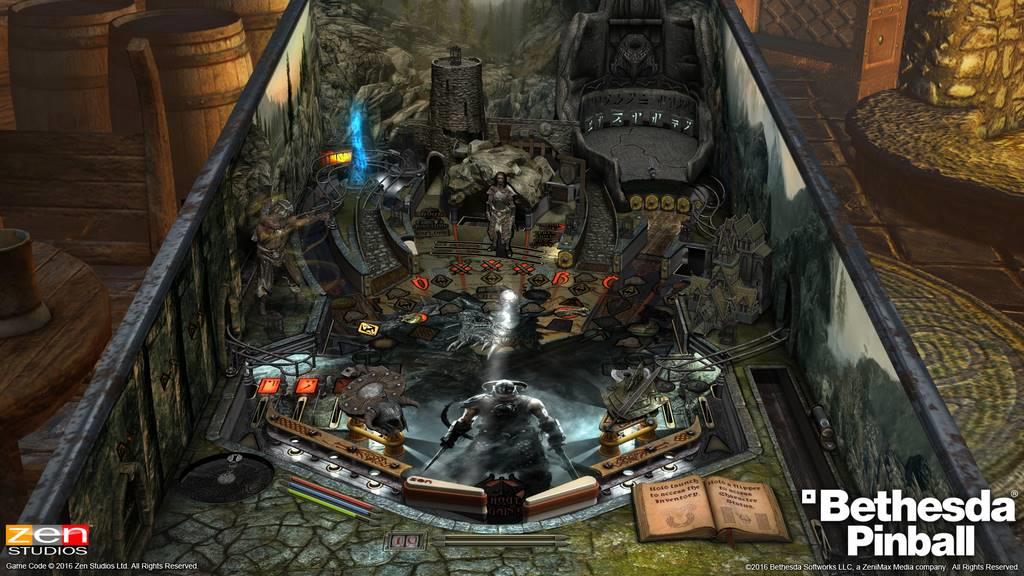 I’m not a huge pinball expert; that is to say I’m not one to go out and play every table I find.  With that said, these are probably the three most complex tables I’ve ever played, physical or digital.  That makes sense really because you can do a lot more with a digital pinball table than you can with a physical one.  With Skyrim for example, Alduin will occasionally fly around the table and breath fire on it to possibly damage you.  I can imagine that if there was a physical Skyrim table (and knowing my luck there probably is one out there somewhere), the fire could somehow be represented digitally on the table itself, but the effects shown on the digital tables are pretty well done.  Beyond that though, Zen Studios did a pretty good job bringing these three complex video games to the pinball table, but that kind of leads me to one of my two nitpicks about these tables.  The first nitpick is a small one that goes for Skyrim and goes back to when Alduin is flying around the table and breathing fire.  When he does that it actually obscures your vision of part of the table for a moment and if you’re not careful, you can actually lose track of where your ball is.  Now granted I never had a moment where I accidentally dropped a ball down the sides or middle of the table due to this, but it was still kind of a nuisance nonetheless. 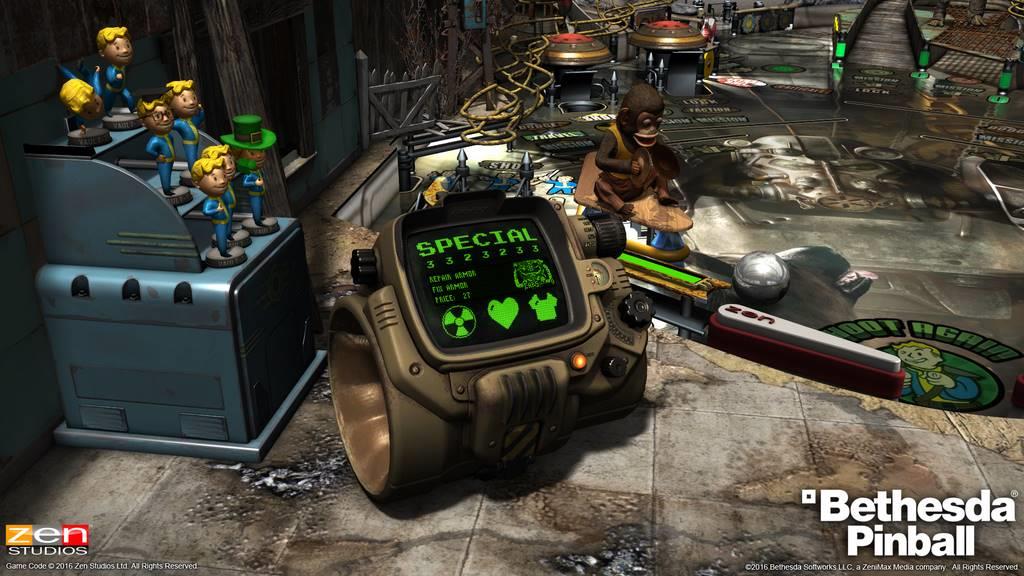 The second nitpick is a bit bigger and it goes for both Skyrim and Fallout.  Both of those games are RPGs and their tables in Pinball FX3 bring those RPG elements with them.  For fans of those games that’s pretty cool to see how RPG elements can be melded into a traditional pinball format.  However, those who aren’t fans of the game might be a bit lost when it comes to just what you’re doing.  Of course you can always look up the table’s info before playing it to see what you need to do and how everything works, and I don’t mind missions in pinball games; a lot of pinball games not based on video games have them and it’s a concept that’s been around for a long time.  However, mixing in RPG elements to that to where gameplay will freeze for a moment when you need to choose a faction or a stat to level up can be a little confusing or possibly off-putting for someone who just wants to play a normal game of pinball.  Thankfully, the Doom table is more of a traditional pinball table where you don’t have to worry about those RPG elements.

Overall, the Bethesda table pack for Pinball FX3 is a pretty good set of tables and has a little something for everyone, from a more traditional table in Doom to the RPG-element heavy Fallout and Skyrim.  If you’re not too interested in the RPG stuff, eleven dollars might be a bit much for this pack as you’d basically be paying eleven dollars for the Doom table and as good as that table is, eleven dollars might be kind of hard to justify for that.  However, eleven dollars for all three tables is a pretty good value, especially given how complex Fallout and Skyrim can be.  If you’re looking to add a few new tables to your Pinball FX3 collection and don’t mind a little complexity here and there, go ahead and give this pack a shot.

The tables in the Pinball FX3 Bethesda Pack are all pretty solid, though they can get complicated at times, namely the Skyrim and Fallout tables.  While those two contain RPG-style elements to them to match up to their original video game counterparts, the Doom table is more of a traditional pinball table, though all three do have missions and quests to complete.  Overall, eleven dollars for these three tables is a pretty good deal, especially given how complex Fallout and Skyrim can be.