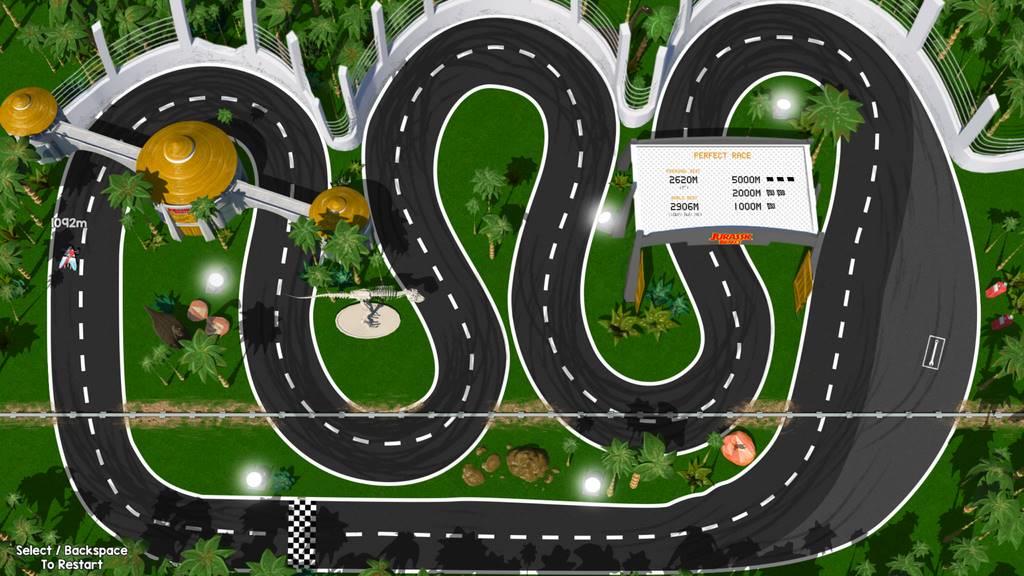 Brakes Are For Losers

When I was in High School, a buddy loaned me his NES system and a small pile of games. While there were several classic titles in the shoebox he gave me, the one that really caught my attention was a racing title named RC Pro Am. A top-down racer released in 1987, RC Pro Am was a seriously challenging title that soon had me skipping full days of class so I could stay home and race the tracks over and over again. Mastering RC Pro Am required players to build up some serious muscle memory in order to succeed. Allowing a single fleeting thought to enter your mind was a quick recipe for disaster. You had to get in the zone and stay in the zone, or RC Pro Am would leave you in the dust.

Brakes are for Losers, a new top-down racer that released recently on Nintendo Switch, triggers some deep lizard-memories that still linger in the depths of my brain. Brakes brings back some of those old RC Pro Am obsessions, and while it doesn’t reach the heights of the earlier title, it is nonetheless a fine arcade-style racing throwback with a few modern twists.

Brakes are for Losers wears its arcade roots on its sleeve, wasting no time informing the user exactly what they are in for. The menu system is exceedingly clever, with players deciding which mode to pursue by guiding their little brakeless on-screen car into areas marked “Championship”, “Custom Game”, “Quick Race”, etc. The fact that the menu car has no brakes catches you off guard the first time, as the tiny vehicle barrels forward no matter what you do, essentially shrieking “Pick a mode! Pick a mode!” at the player. 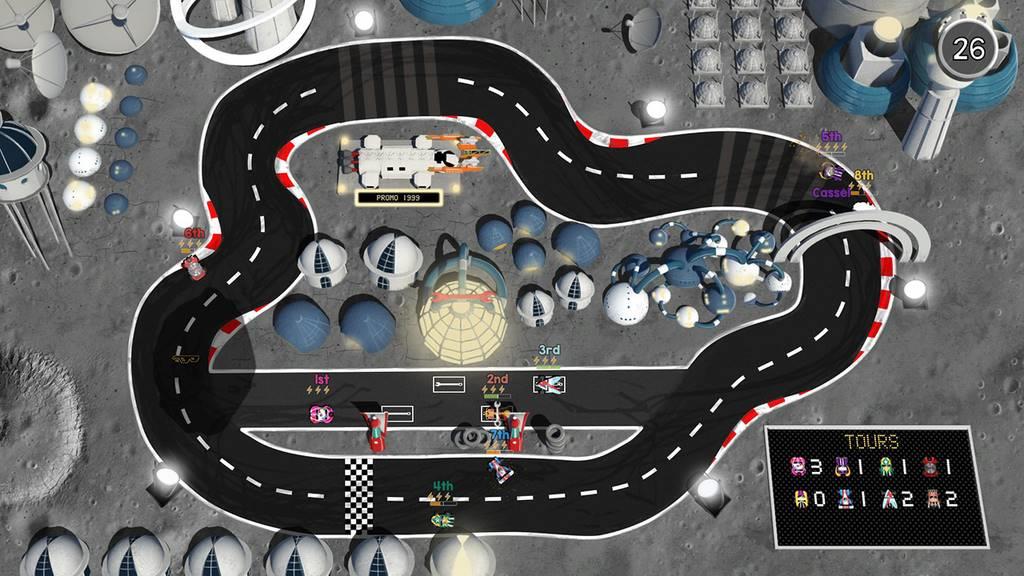 Gameplay for all game modes centers around this permanent forward momentum. You are placed on a circuitous track. When the race starts your car lurches forward, whether you like it or not. As the name of the game implies, there are no brakes, so slowing around corners is not an option. The first time I tried this, I was completely flustered. I was bouncing off the walls, veering wildly out of control, racing the wrong direction, you name it. There is no way to turn around and get yourself moving in the correct direction again other than to strategically bounce off more walls and try to wrangle your relentless vehicle. Stopping and reversing is simply not an option.

This leads to a quick recalculation of racing expectations. While hitting walls is still not desirable, it is at times inevitable. Suddenly, I was thinking about racing lines in a new way, planning to bounce off the walls at specific points. Ramming into the edges of the track becomes a strategic option as opposed to something to be completely avoided. 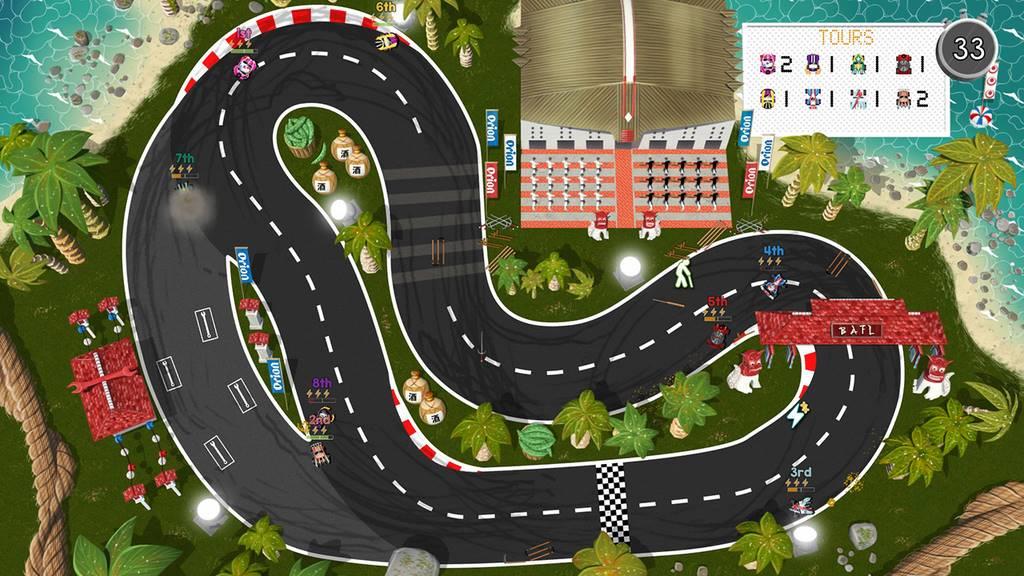 Of course, bouncing off walls (and other cars) leads to another wrinkle in the game, as your car is susceptible to damage. Take too many hits, and you find yourself exploding midrace. This is only a temporary setback, as your car is quickly restored with a bit of health. But the slowdown caused by bursting into flame is enough to allow your competitors to go flying by you, so exploding is something to be avoided. In order to combat the unavoidable accumulation of damage, players are provided with a pitstop nestled by the side of the track. While it goes against every grain in my gamer body to slide into a pitstop, I quickly saw the wisdom of planned repairs. Along with knowing when to bounce off walls, knowing when to pause to let your car be repaired is critical to success. I discovered that while exploding could cause me to lose my position, pulling into a pitstop for repairs typically would not negatively affect my standing, as most other cars regularly followed suit. Working pitstops into the cadence of a race quickly becomes second nature. You are further not locked into an entire “pitstop animation”, so pulling in just long enough to repair sufficiently to survive a few more laps is a totally viable option.

All of the above analysis makes this game sound like a strategy-based racer. Nothing could be further from the truth. This is an arcade racer down to its very core. Most of these “strategic” realizations only came when I sat down to write about Brakes are for Losers. This is all just stuff that I naturally started doing while playing the game. Like all decent arcade games, Brakes teaches you what to do and what not to do in the course of playing the game. Just like exploding when you brush up against an asteroid makes you realize “Oh, I shouldn’t touch the asteroids”, Brakes makes you realize “Oh, I shouldn’t worry so much about bouncing off the walls”. And like all good arcade games (and RC Pro Am), a certain amount of muscle memory builds up as you play the game. Before long, you are whipping around the tracks, sliding into pitstops and racking up first place wins. Or bitterly cursing. It wouldn’t be an arcade game without the bitter cursing. 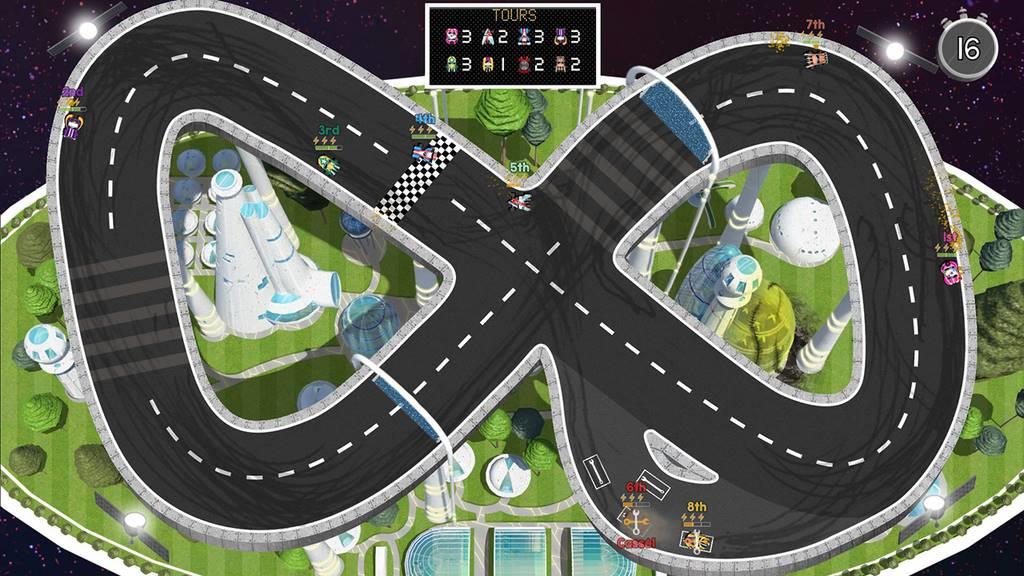 Several modes allow you to try out your new skills. I enjoyed playing the Time Trial mode repeatedly while building up my chops, trying to beat my previous times on an empty track. This allowed me to move into Championship mode (a series of races with points awarded in accordance with placing) with far more ability and confidence. After resounding success in “Easy” mode, I cranked the difficulty to give myself a greater challenge. Championship mode offers a fun little mechanic that allows you to buy upgrades for your car between races, which can sometimes allow you to stage a dramatic comeback when you start a round at the bottom of the back.

Multiplayer can support up to eight players. The most I was able to manage was three (does anyone on Earth have access to eight Switch controllers?). Even with a lower number of players, multiplayer is a hoot. In all modes, the track is occasionally littered with powerups. In multiplayer this feature comes to life, offering matches a Mario Kart-like feeling of random changes of fortune.

The presentation in Brakes are for Losers is a little barebones, but frankly, it doesn’t matter much. The graphics are serviceable, but a game of this nature doesn’t require much in the way of graphical fidelity. I will say that on the Switch’s native screen, the little cars can disappear in a jumble at first, but after a few matches I learned how to track myself through the chaos. Brakes are for Losers doesn’t

Brakes are for Losers is a clever and clean little arcade game that doesn’t aspire to be much more than a good time. For those looking for a fun, inexpensive multiplayer game on Switch, there are far worse options.

Brakes are for Losers is a fun throwback to the racing games of yore. Fans of RC Pro Am or Super Sprint ought to feel right at home once they stop freaking out about having a basic racing control pulled out from under them. Single player has a number of good modes for practicing, but the game really comes to life in multiplayer. If you are like me and are constantly on the lookout for local multiplayer titles, this is an inexpensive way to add a fun title to your library.