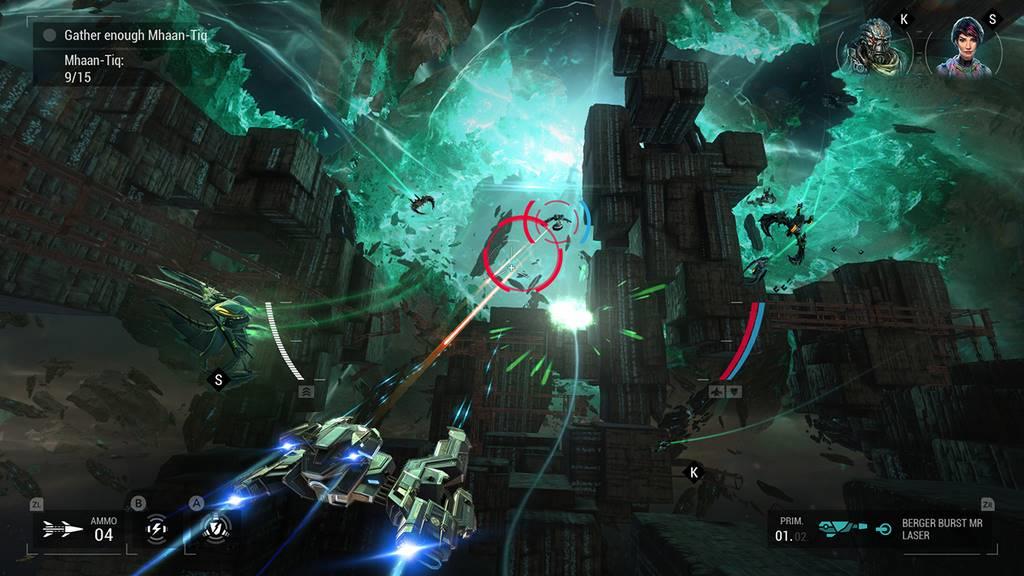 Aerial combat games have been around for a very long time and are basically all over the place.  Whether it’s something simple like Star Fox or something a bit more complex such as Crimson Skies, there’s something for everyone and for the most part they’re pretty enjoyable.  It was with that mindset that I went into Manticore; Galaxy on Fire to see if Deep Silver’s latest entry into the Galaxy on Fire series was worth checking out.  While this has been out for a bit on mobile devices, I’ve never played any games in the Galaxy on Fire series, so I’m going into this one with a fresh take on the game.

The game begins with you getting attacked by pirates belonging to a group known as Indigo Brink.  You’re saved by two other pilots named Saya and Kyyrrk who work for Commander Bryce Vantok aboard his ship The Manticore.  He explains that their skills are for hire and that if you’re looking to make some money, he’s glad to have you aboard.  You’re then tasked with escorting a Terran Federation representative to an upcoming conference to discuss how to exploit the Neox Sector’s Mhaan-Tiq resources.  During the escort however, something happens that results in the planet being completely wrecked.  Dubbed “The Shattering”, the catastrophe wipes out the Indigo Brink pirates, but another group of pirates called the Gr’Gath somehow survived.  At this point Bryce determines the best course of action is to return to the Manticore, sift through the data, and see just what’s going on.

Manticore: Galaxy on Fire is made up of a couple major areas to explore with multiple missions in each.  The missions will typically consist of you flying around and taking down multiple enemy ships before confronting a boss or another major enemy.  Some of the missions even have you escorting other ships or transports and keeping them safe, because everyone loves escort missions. After each mission you then have the ability to just explore that area at your leisure, searching for various bits of intel or ship parts that might be scattered around.  While on the Manticore between missions you can check out the intel you’ve collected, go to the hanger to manage and upgrade your ships, continue the main story, or just explore any previous area as explained a moment ago.  The main story option shows you how far along you are in the story, and when you go to the main map for exploring you can see how much of each area you’ve explored (ie. found everything there is to find). 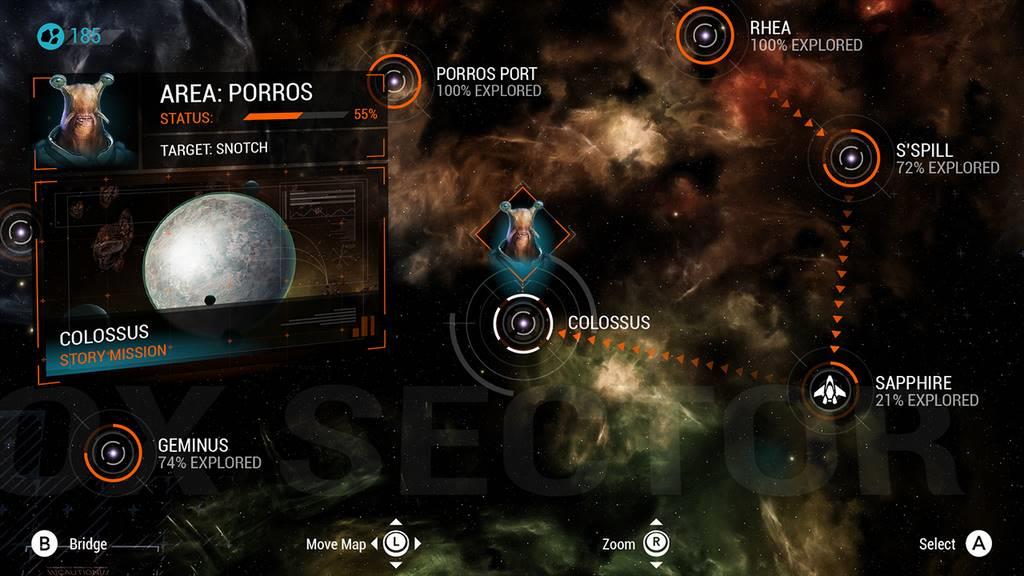 Controlling the ship can be cumbersome at times depending on how many other games of this genre you’ve played.  My main experience with ship or plane combat games is the Star Fox series where you have a lot of control over your ship and how your weapons work, so this took some getting used to as things felt a bit more limited here.  The left stick moves your ship in any direction, but there are no buttons to help roll the ship more more precise turning and aiming (think the L and R buttons in Star Fox and how they tilt the ship to the side).  While ZR and ZL will fire your primary and secondary weapons respectively (and R and L will change them if you have two equipped), movement speed is mapped to the right stick, but you really don’t have control over the speed itself.  If you tilt the right stick up you’ll activate your thrusters and move at a faster speed, but you have a gauge that will start to drop as you hold the stick up and you can’t activate your thrusters again unless that gauge is at least half full.  Pulling the right stick down will drop your speed almost to a halt which does help with aiming to a degree.  Moving the stick left and right will do a quick barrel roll to help avoid enemy fire before the ship auto-moves back to the center of the screen.  The controls aren’t terrible by any means, but it may take a couple of stages to get the hang of.

Before going into a mission you go to the hanger to equip or upgrade your ships or weapons.  You have a limited number of parts you can use to upgrade something with and you can only upgrade something so much until the game tells you that you need to be at a higher player level to upgrade it any further.  This is both a blessing and a curse.  You don’t want to spend all of your parts on the same one or two features and basically make yourself undestroyable or able to take down any boss with one shot, but at the same time it almost feels like you have to basically level things up evenly early on instead of focusing on just one or two things to make your ship feel truly unique.  It also doesn’t help that after the first few stages, the bosses can begin to get real tedious as I’ll explain in a moment. 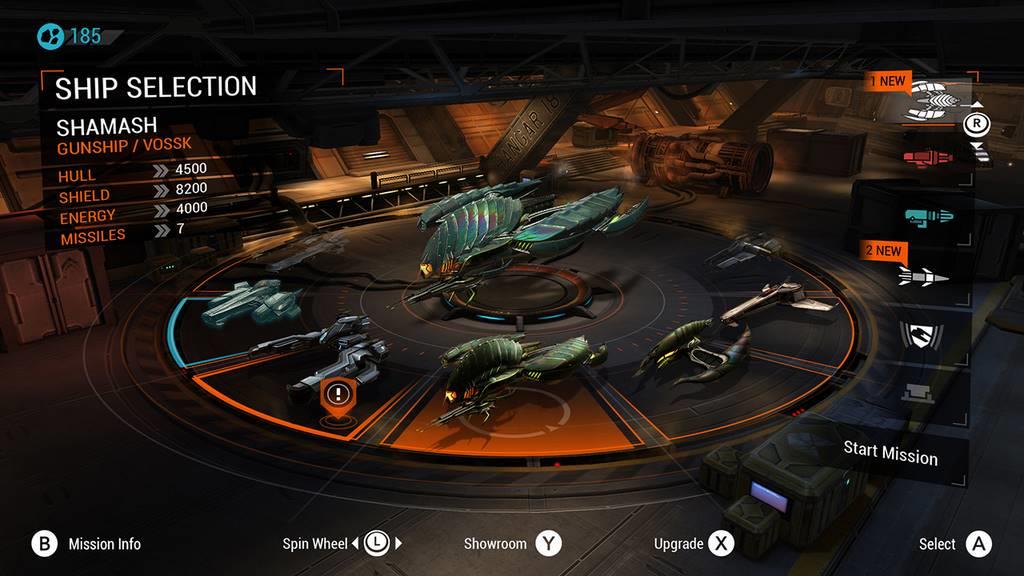 The exploration parts between stages is a nice breather after nearly getting wiped out by a prior boss as you’ll be able to just explore the area at your own pace, only occasionally having to deal with a few stray pirates.  However, this can get a tad tiresome after a while.  You do have a drone that’ll fly around with you as you search for parts or intel and the drone will turn yellow when you’re near something, green when you’re really close to it, or red if you’re flying too far out and are about to go out of bounds.  The problem though is that you really have no other visual indicator where something is located.  Once or twice I’ve found all but one item and literally just started flying back and forth in straight lines hoping for the drone to turn yellow to tell me I was on the right track, only to finally find where the item was after doing that for ten minutes.  It is a nice breather, but it got a tad tiresome after a while.

There are also some annoyances with the main story areas.  The first is that depending on where I’m at, the collision detection seems off quite a bit.  Basically I’d be flying around and I would be near various “space debris” for lack of better term, but while flying near it my ship would bounce off of it as if I was actually running into it which throws me off a bit.  Not to mention that it does damage to my ship, though at least that’s minimal.  The other issue comes when trying to shoot down various targets, namely either bosses or during escort missions.  While normal ships aren’t that difficult to get rid of, especially if aim assist is turned on (which admittedly I turned on after a while to make things easier), bosses can be a pain sometimes, which I get; bosses are supposed to be challenging.  However, in the early missions it can take forever to lower a ship’s shields so you can actually damage the ship itself, but the shield can regenerate over time (for the record, yours can too) and if other enemy ships fly in and start to hassle you to the point you have to take them out first, the boss’s shield will have regenerated again by the time you get back to them.  It also doesn’t help that they’re really good at dodging your shots. 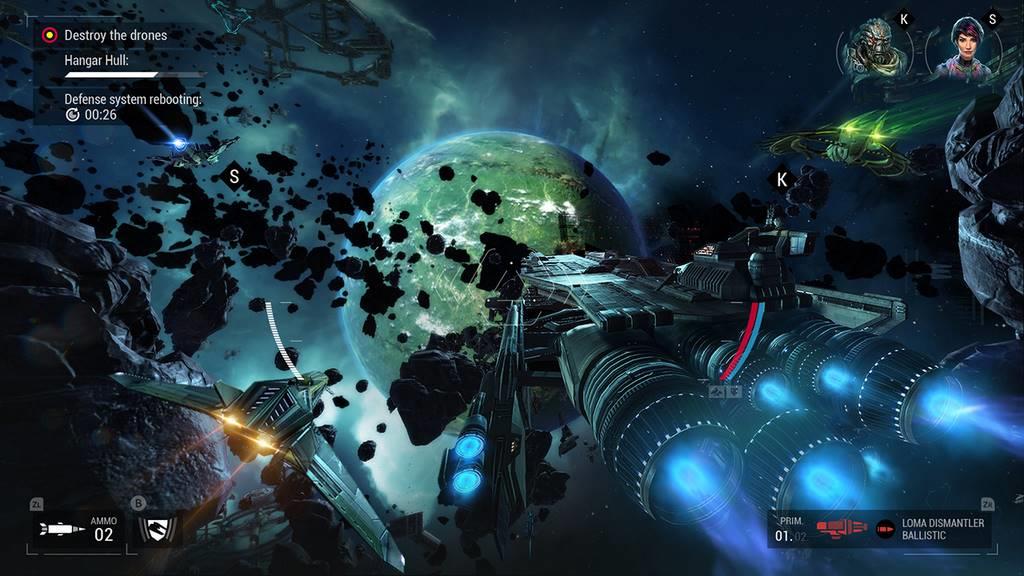 As for the escort missions, you might sometimes have to decide where to turn your attention to and it may seem like it doesn’t really matter at certain times.  In one stage I had enemy ships flying around as well as turrets targeting the ship I’m escorting.  My first attempt I dealt with the enemy ships as they’re really easy to take out, especially with aim assist.  That however left the turrets plenty of time to take out the ship I was escorting.  The next attempt was a complete 180; I took out the turrets first and the escorted ship survived that, but then I got destroyed by the enemy ships, and even with the early upgrades your shields and energy can deplete pretty fast.  It almost felt like a no-win situation and took several tries to complete.

Overall, Manticore: Galaxy On Fire is a good game, but it can seem quite difficult early on.  Graphically speaking the game looks pretty good, though the dialogue is hit and miss.  Saya’s performance is pretty good while Kyyrrk’s kind of feels like he’s literally reading from a script if that makes any sense.  The best dialogue in the game comes from the AI you get early on that basically has something against organic lifeforms and she’s not afraid to let you know.  In conclusion, the game is good, but it can get pretty difficult at times in the early going.  I’m not saying I’m an expert in this genre; if it’s not called Star Fox I’m kind of mediocre overall, but I felt like a lot of the issues I had weren’t due to my own skills.  Still, if you like these kinds of games, it’s still worth picking up, especially since you can take it with you on the go.

Manticore: Galaxy on Fire is a good game but with a few issues.  The occasional collision detection issues had me bouncing off of stuff that was at least a few feet away from me which didn’t help during boss fights, plus the boss fights themselves can get really difficult in the early going since you’re limited in how much you can upgrade until you level up a bit.  Still, if you like these kinds of games it’s still worth checking out.